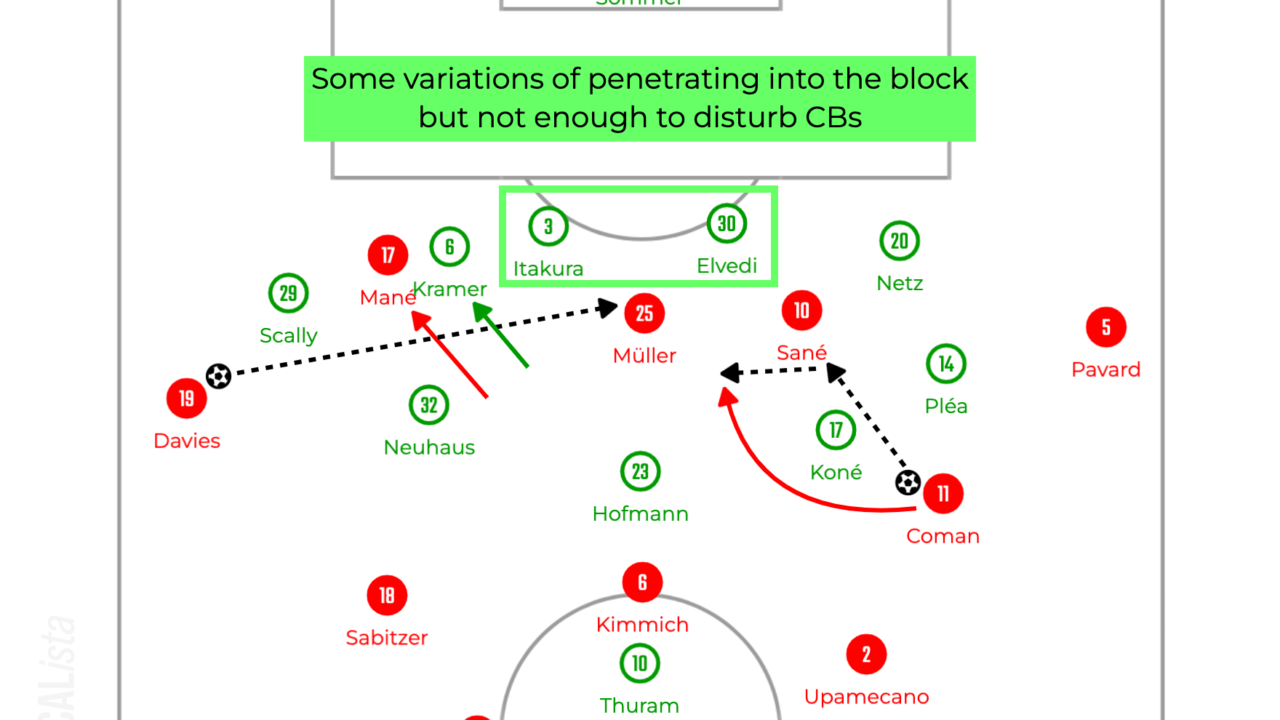 It was a typical game that a team dominating the game struggles for breaking down the opposition low block, concedes a goal by a poor mistake and finally drops points. Additionally, there are usually some resignations such as “it was unlucky” or “it wasn’t our day”. However, there are more things to do. In this game, Bayern could’ve improved not only just accuracy of finishing but also one more effort to make a better situation to take a shot. Therefore, in this article, the analysis of the game itself and discussion about why disturbing the opposition centre backs is important to create a favourable scenario for finding the net are going to be provided.

The reason why Bayern could have dominated the game is not only Borussia set the defensive block in the midfield but also the pressing of the hosts was intense and organised so that the away team couldn’t build the attack. As Kramer often became a pivot, Nagelsmann adapted the shape to press against the opponents. 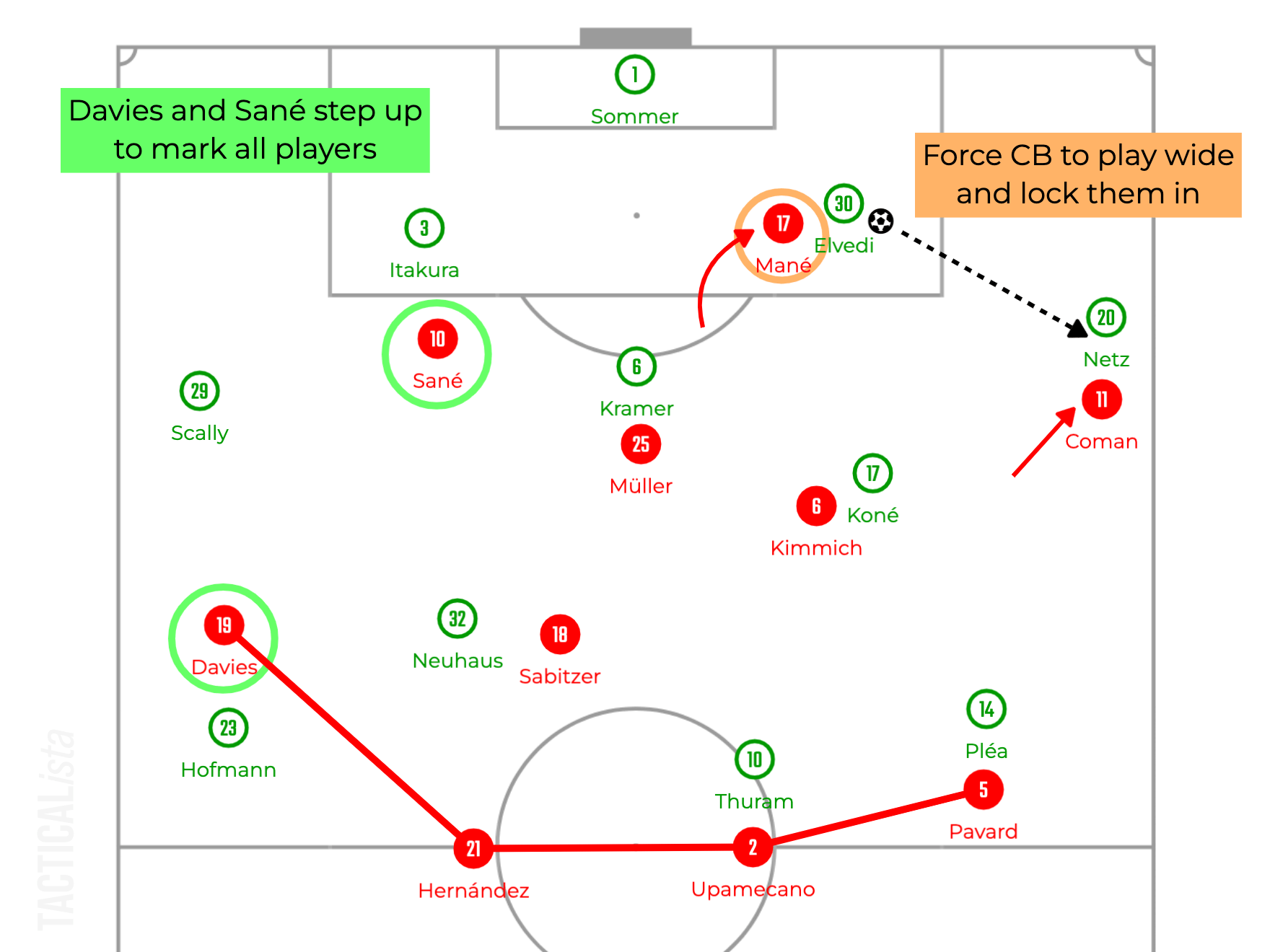 Müller, one of the strikers, mark Kramer and Mané and Sané marked each opposition centre back. At the same time, the left fullback Davies stepped up to mark the opposition right fullback and the rest of defenders shuffle across to the left side. Then, Mané applied pressure to the centre back with showing the wide and the ball side players tried to close down the opposition players they faced. Borussia couldn’t keep possession under this pressing and Bayern dominated the game by reducing the time to defend.

Struggle for Scoring a Goal

Then, the problem was scoring gaols even though they netted three times. Against the compact defensive block, Bayern often began the attacking in the final third from playing to the winger or fullback who was positioned high up the pitch. 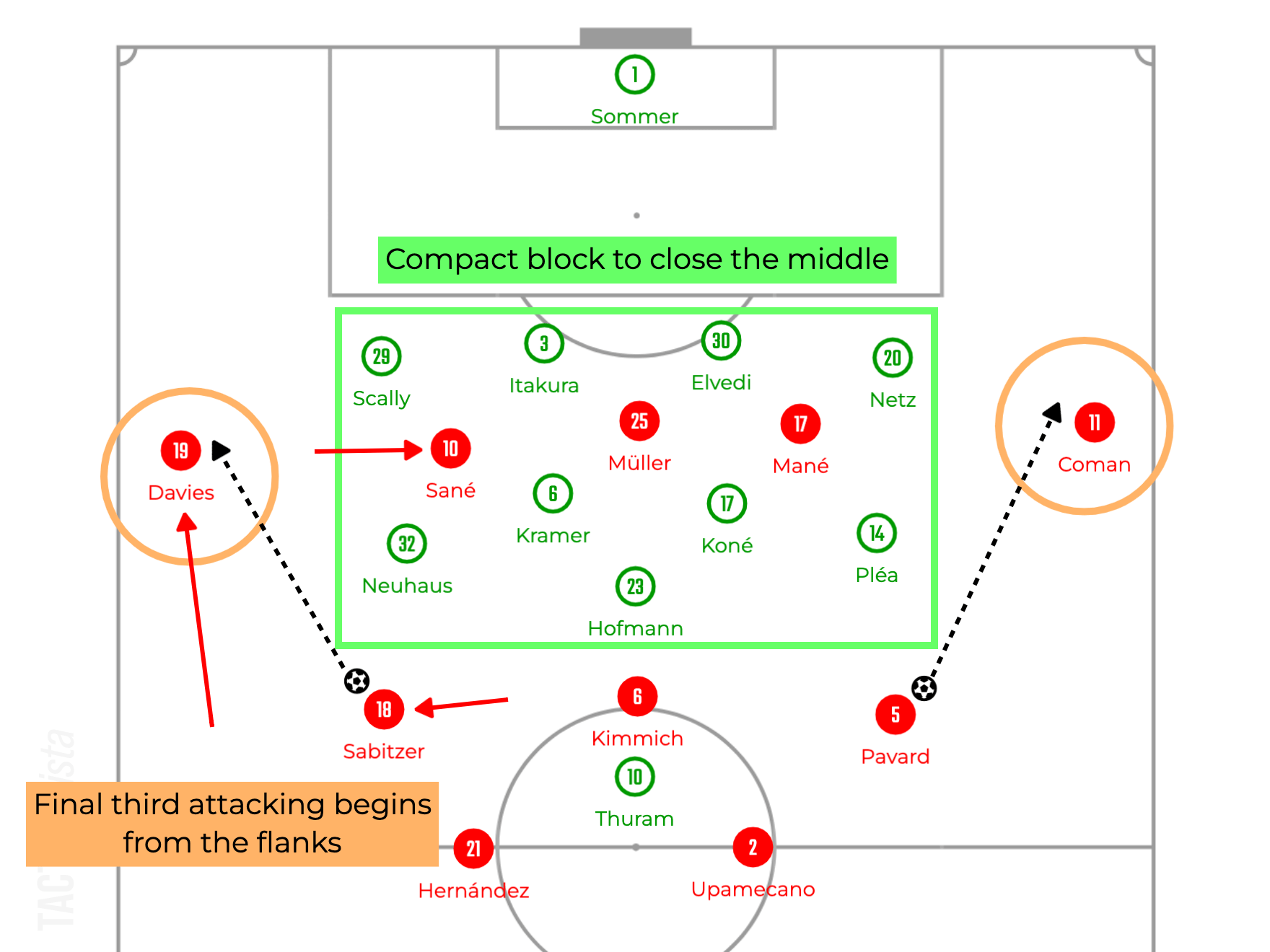 The feature of Bayern’s attacking in the final third is the narrowness in the middle lane of the pitch in order to manage the opposition counterattacks and regain the second balls to keep attacking until finding the net. Therefore, they tried to play into the middle from the wide areas as many as it became possible. However, Borussia organised the compact block so it made really difficult for Bayern’s attackers to play in such a tight space. 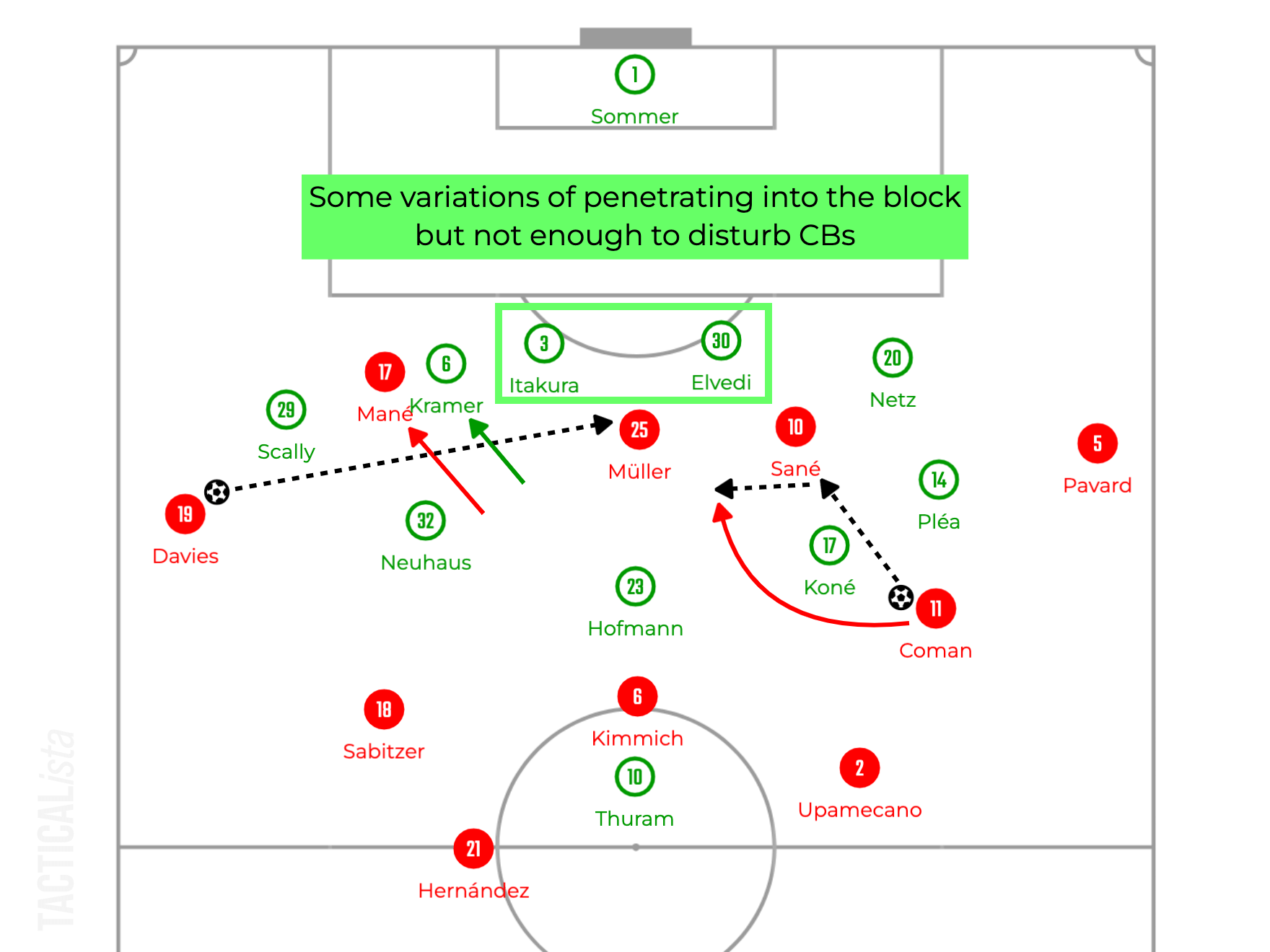 Additionally, they could enter the space in between the lines by some combination several times but the opposition centre backs were still able to defend the most dangerous area and Bayern’s attackers often ended with a hopeless shot from a distance.

Moreover, when they exploited the wide areas and delivered crosses, both opposition centre backs and at least one of the defensive midfielders could defend against them in front of the goal where is the most dangerous area. 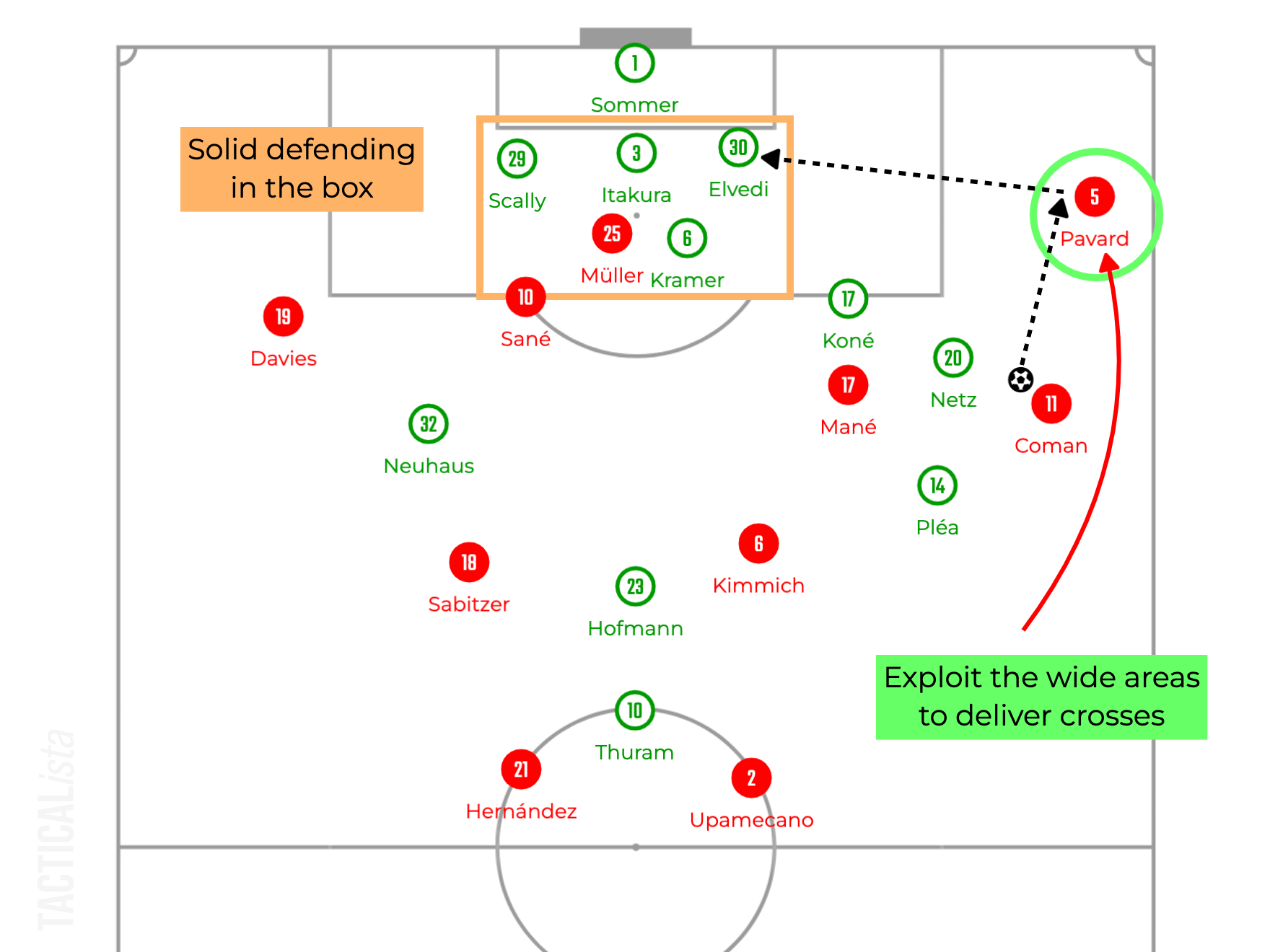 Therefore, it is possible to say that Bayern failed score more goals because they couldn’t move away the opposition players who defended the most dangerous area.

The Importance of Disturbing Centre Backs 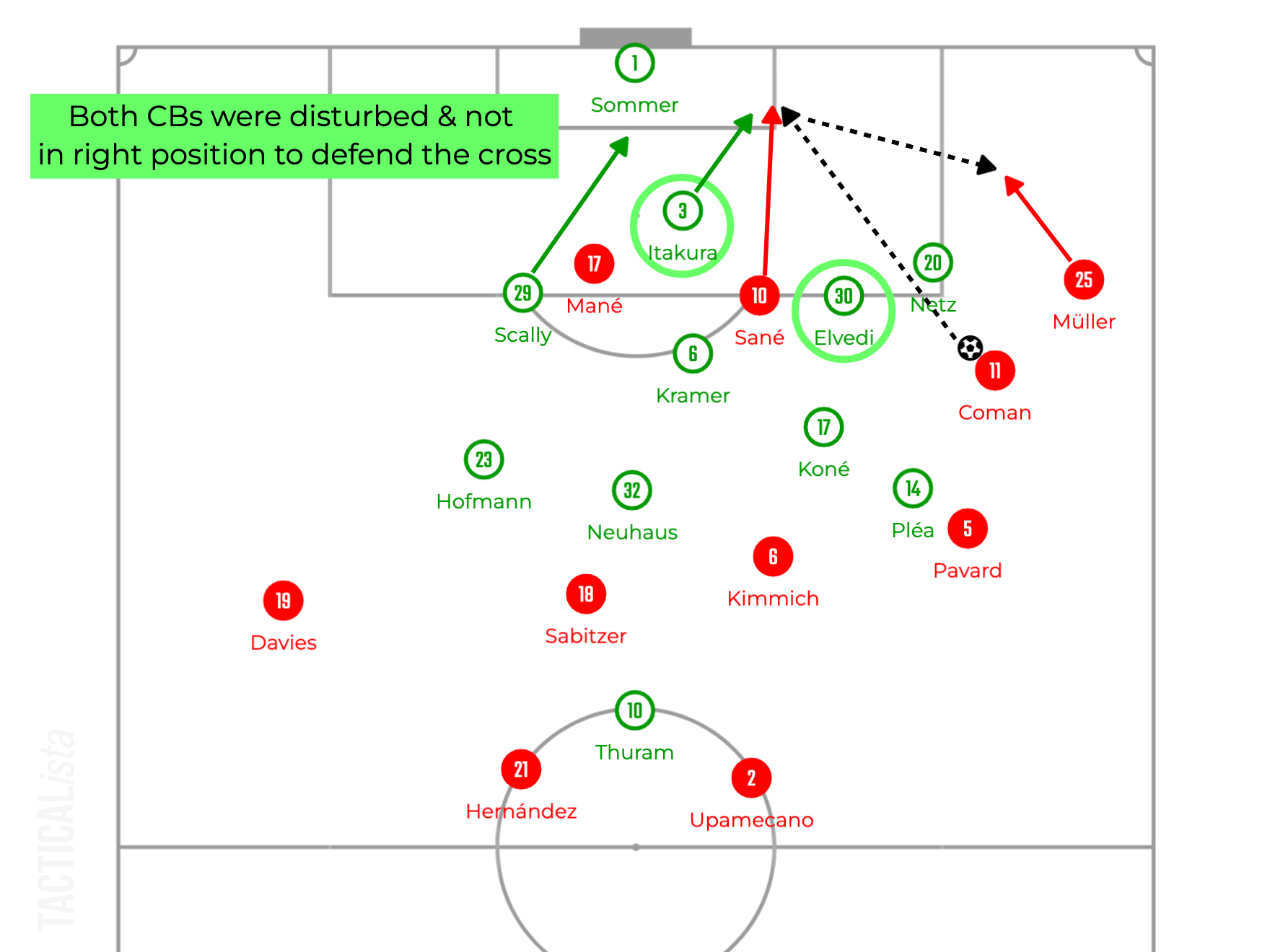 In that situation, thanks to Coman’s driving forward and Sané’s movement, both centre backs were disorganised. Elvedi was fixated by Coman and Itakura needed to track Sané who ran in behind. It made difficult for them to defend against the cross from Müller and Mané could move behind the opposition fullback who was forced to move towards the first post to cover the space behind Itakura. 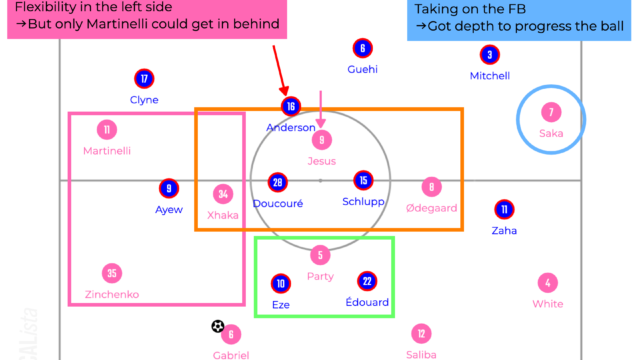 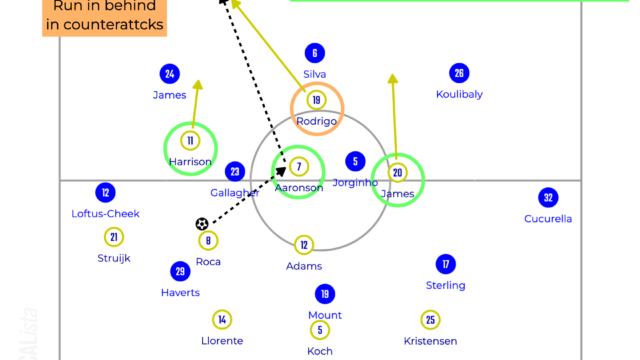 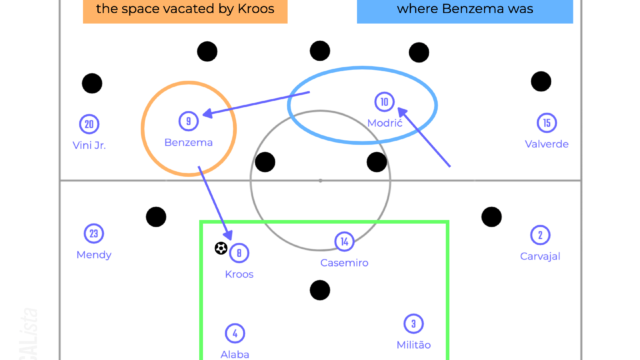