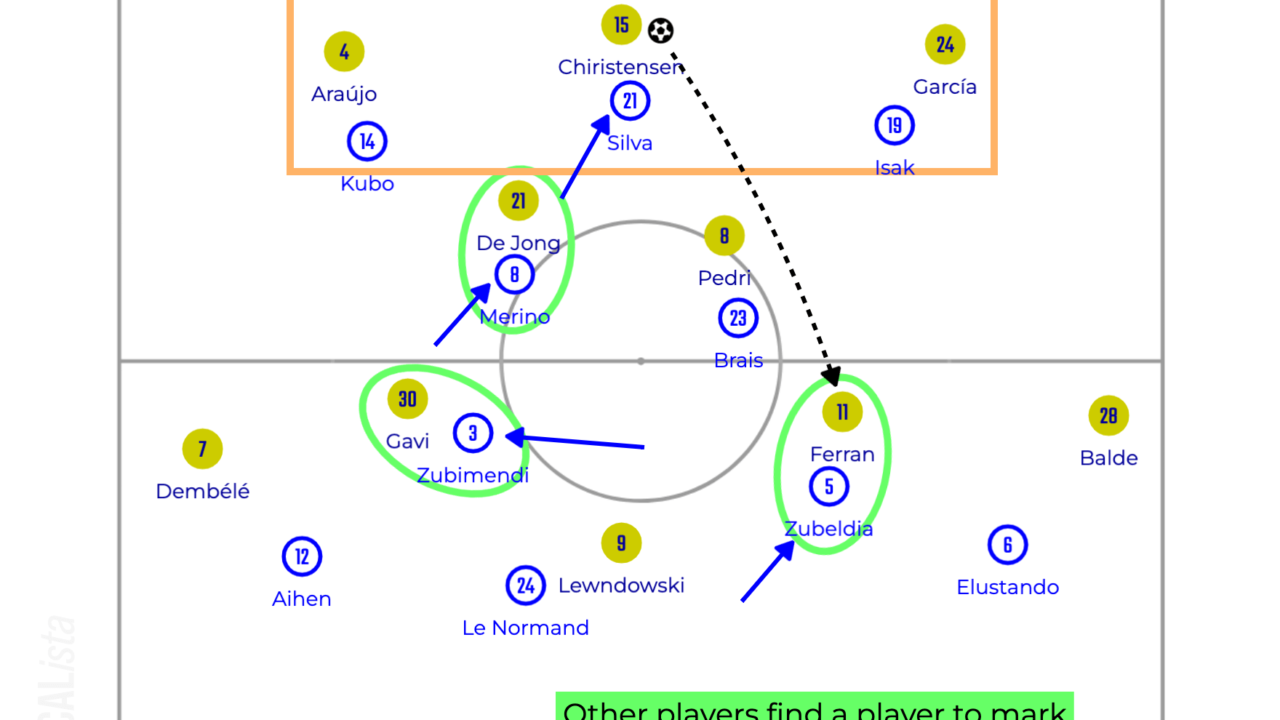 It was a typical Spanish football game. Both Real Sociedad and FC Barcelona can play with the ball and want to have the ball. However, it means that the team out of possession will press aggressively because only one team can have the ball. In this game, both teams tried to press by man marking approach and force the opposition team to play long. However, there was a slight difference in pressing but it made a difference. In this article the analysis of the game of Real Sociedad against FC Barcelona and the discussion of the difference of pressing style are going to be delivered.

The home team began the game with aggressiveness to win the ball. It was a shame that they conceded the goal from the counterattack within a minute, but the aggressive pressing continued throughout the game. The best way to force the opposition players to throw the ball away is pressing with marking all outfield players and chasing the ball even towards the opposition goalkeeper. 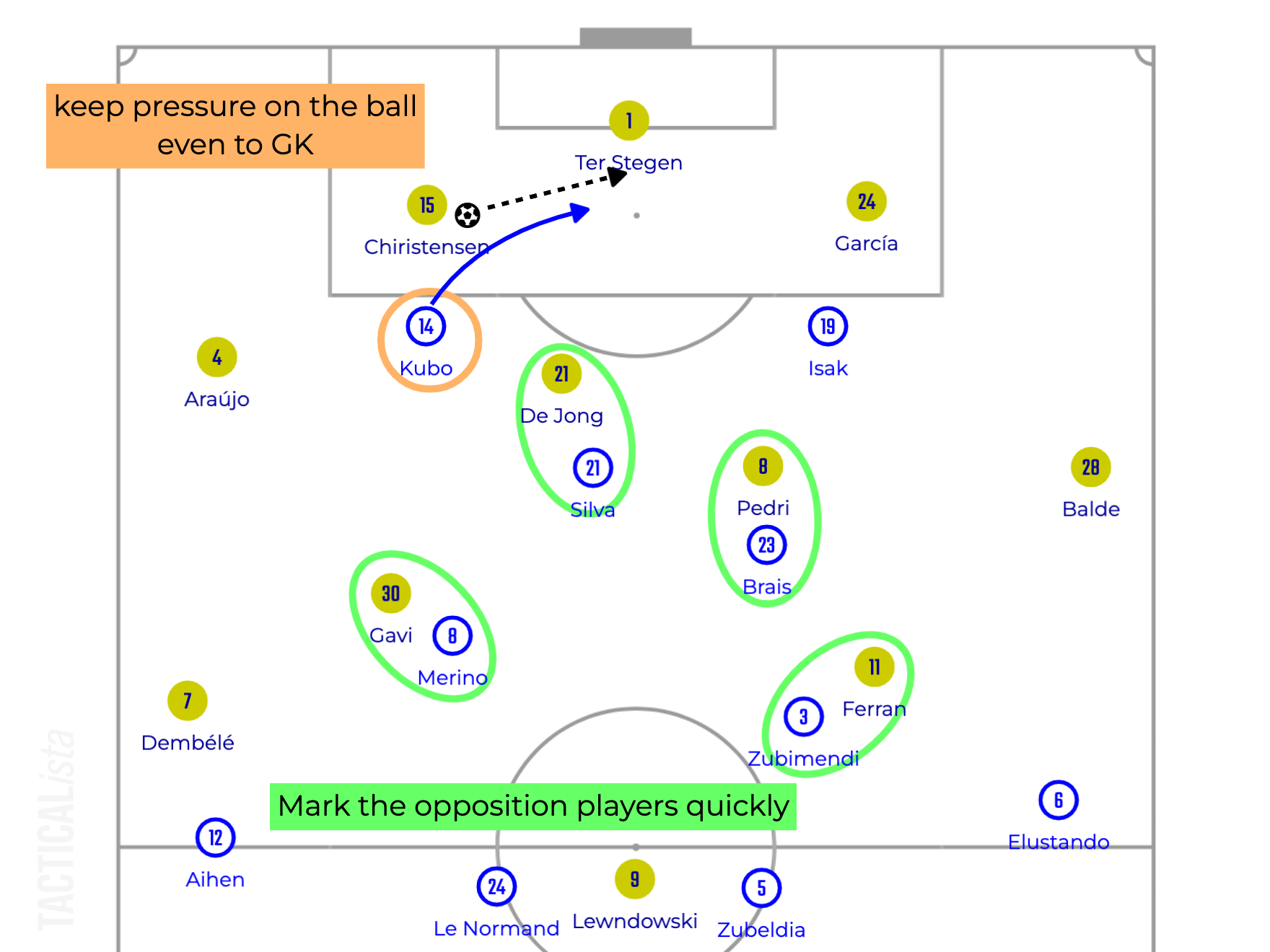 Kubo, Isak and Silva often continued to press after the opposition centre back played back to Ter Stegen. He has a great ability to find a spare player and play short under pressure but if there is no option, it is impossible to play short. In this game, the four midfielders of Real Sociedad marked all players of Barcelona to prevent them from receiving the ball, so Ter Stegen often played long to avoid losing the ball in the own half. 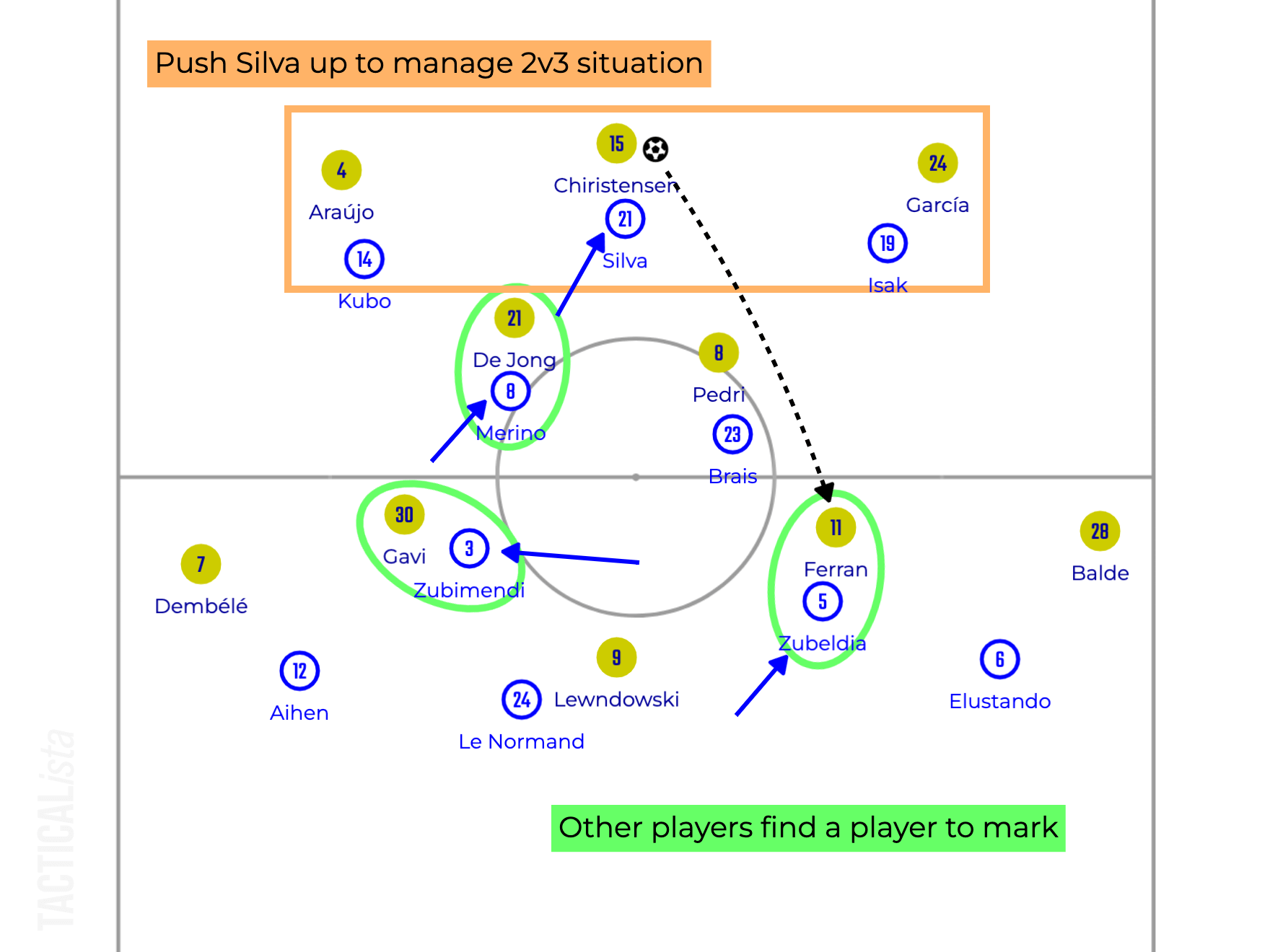 In the middle third of the pitch, it is difficult to use the goalkeeper so Barcelona shifted the back three. La Real basically played with a 4-3-1-2 but in order to adjust the back three, Silva stepped up to the front to keep pressing with man-marking. However, it means there will be an underload in midfield. Thus, one of the centre backs stepped up to the player unmarked in the midfield to prevent them from finding the spare player.

The reason why they persisted in man marking pressing is winning the only one ball back and having the possession more. While La Real pressed with all man-marking, Barcelona didn’t mark all players and it made a difference.

In contrast to Barca struggled with playing out from the back, La Real could progress the ball by finding a spare player. 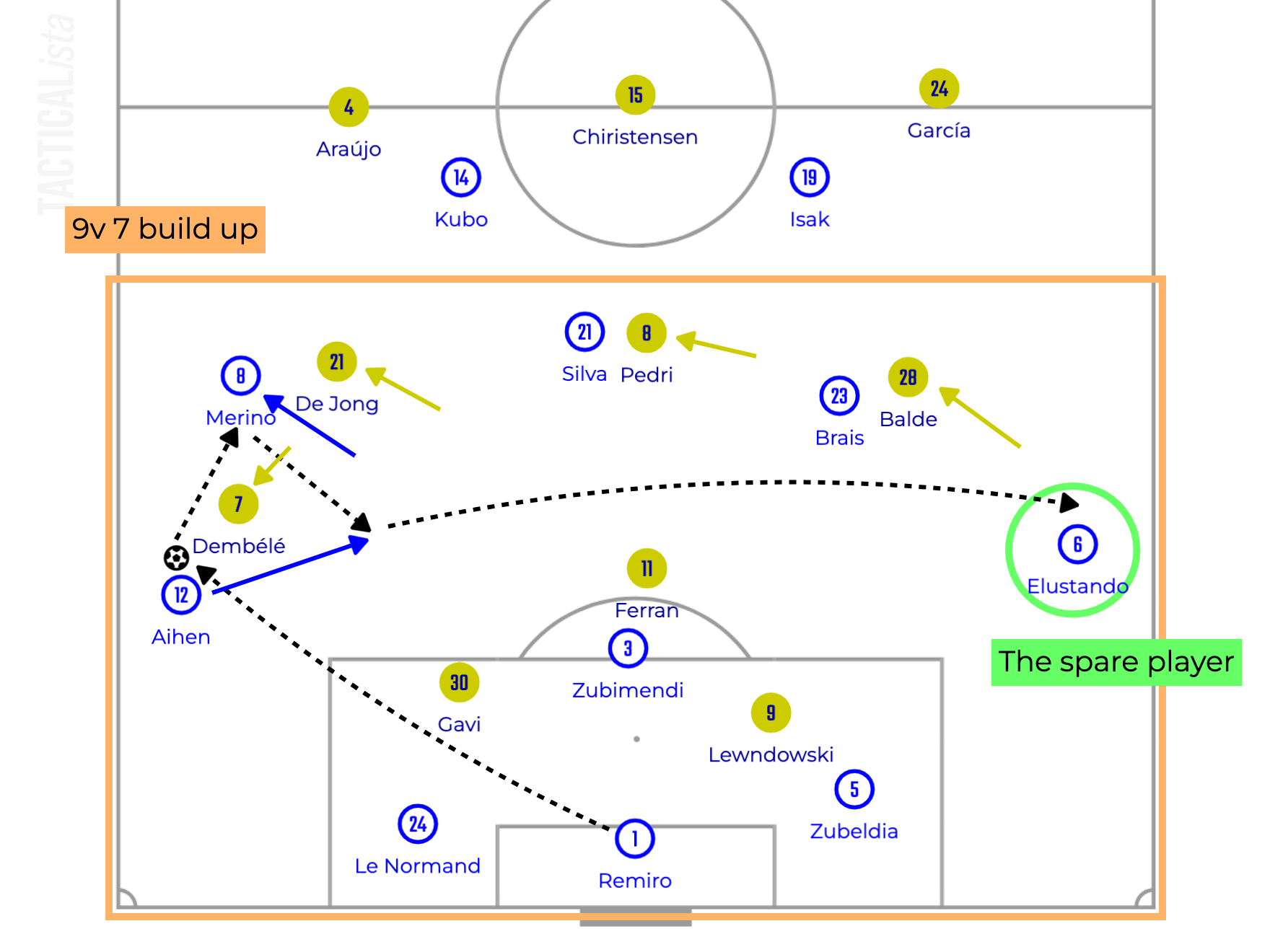 Barca accepted the underload in pressing by defending against two strikers with back three. Therefore, one of the objectives of playing out from the back for Real Sociedad was finding a player who was left by the opposition players. Barcelona made it man-marking against the two centre backs and pivot to prevent them from playing short comfortably but if the fullback could receive the ball, Barca was in trouble. La Real was excellent at keeping possession in a numerical equally situation and playing horizontally to pass the ball to the spare player in the opposite side. If Barca delayed shuffling across and marking the player, La Real could comfortably progress the ball.

The difference between them in pressing is how much they took a risk. La Real looked more aggressive and better than Barca but they often could progress the ball directly by long balls because La Real accepted numerical equally situation in the back line. On the other hand, Barca couldn’t win the ball back in the opposition half but La Real struggled with breaking the final line. Therefore, it is possible to say that both could gain a decent result they recognised.

Of course, sometimes Barca could have the ball in the final third but it was less effective until Ansu Fati coming on. The main reason is they focused on keeping the possession too much and couldn’t threaten the opposition goal. 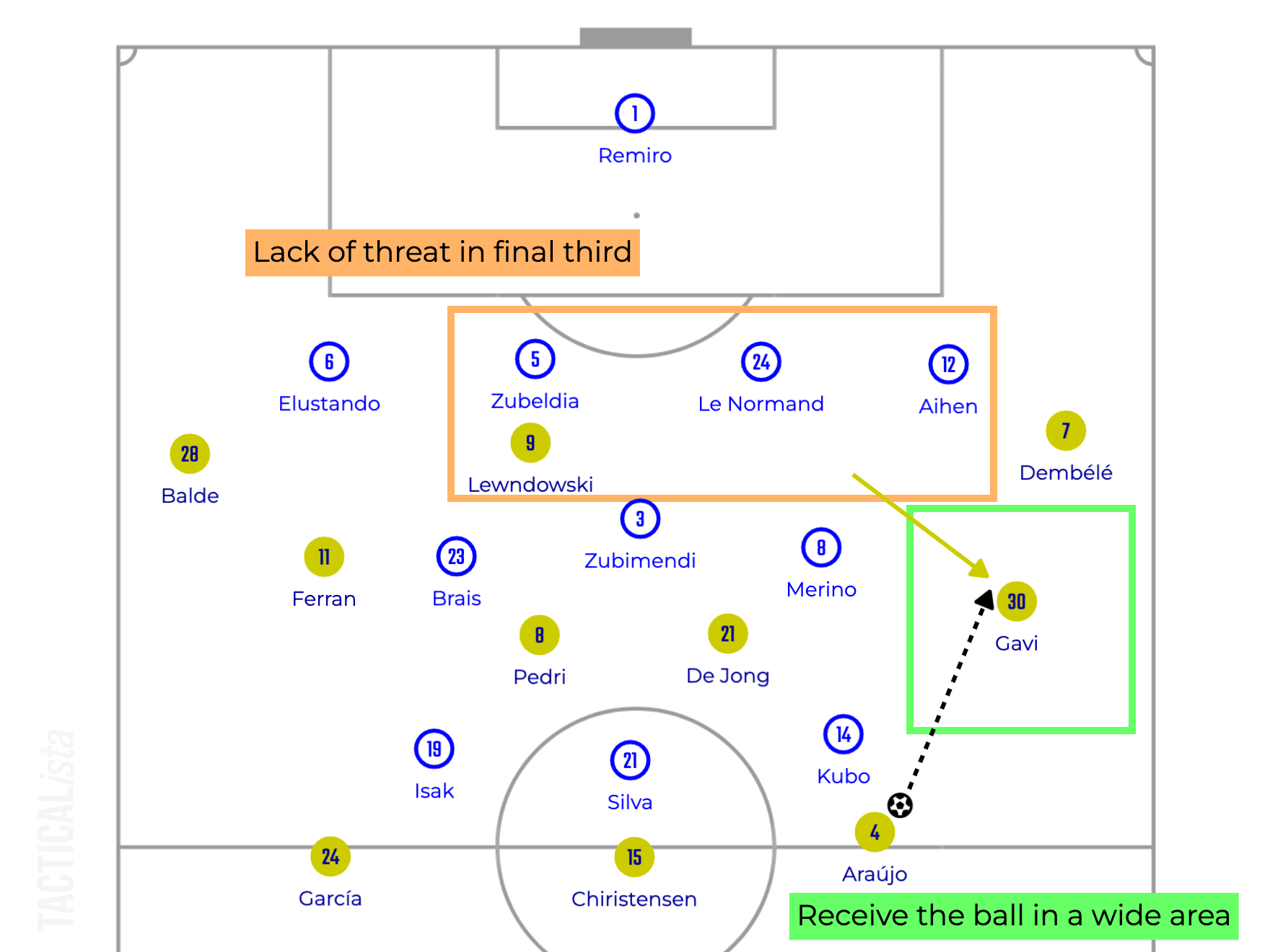 As like the defensive organisation in the midfield, La Real defended in the own half with a 4-3-3. Therefore, it is possible to defend the space in middle but difficult to cover the space in wide areas. Thus, Gavi or Ferran often drifted wide to receive the ball there and it helped to keep the possession in the opposition half. However, it makes less dangerous around the box as the number of players in between the lines were less.

Additionally, another reason of this is that they often progressed the ball into the final third by long balls so there was no time to push up the whole team and add more players upfront. In their words, there was no “Pausa”.

For those reasons, they couldn’t find another goal soon but Ansu Fati played closer to the goal and produced goals by quick combination around the box. It was a difficult game for Barcelona but they played more realistic and were able to fix some problems to win the game. Thanks for reading. 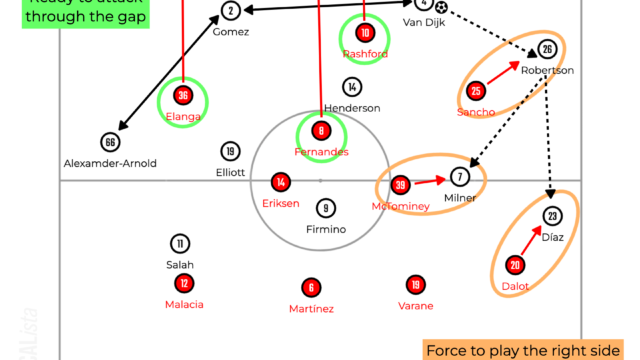 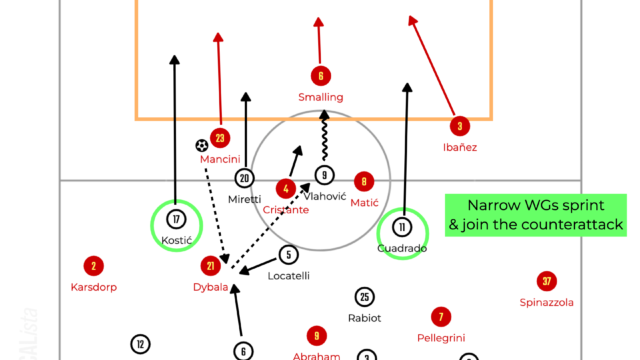 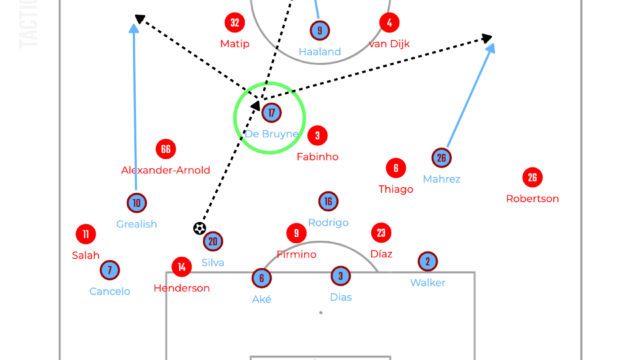