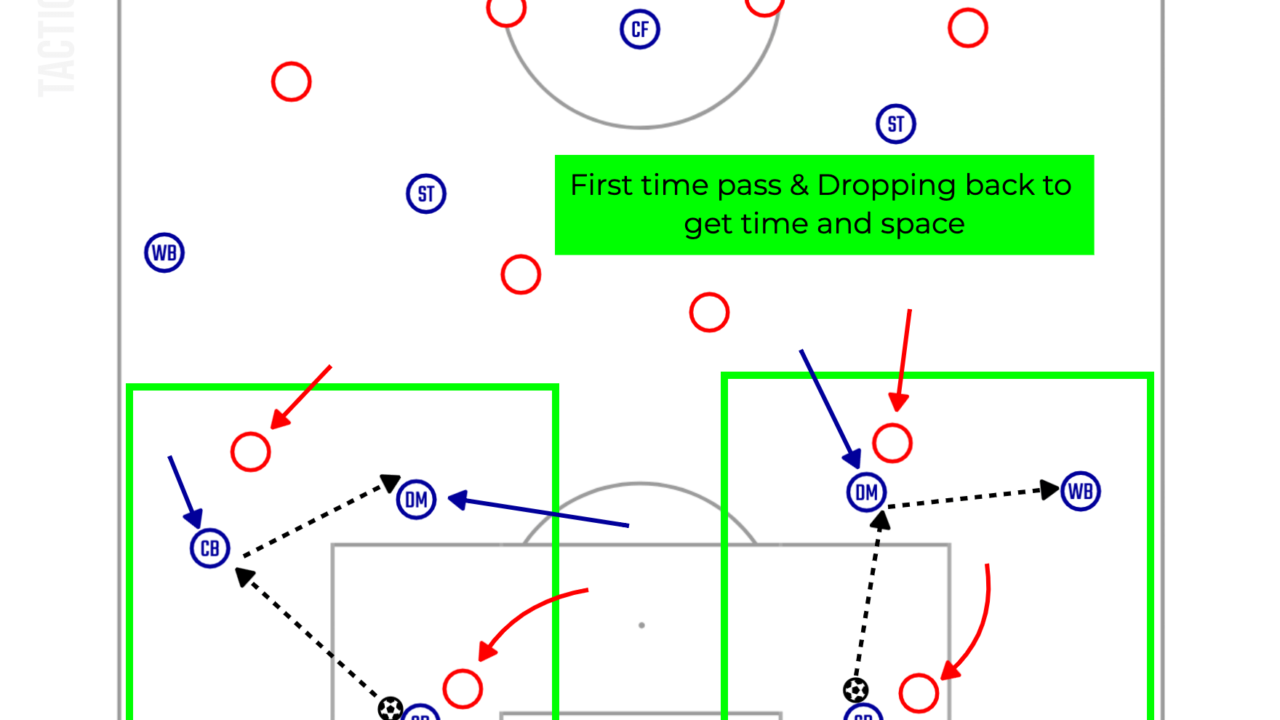 Antonio Conte’s football is creating counter attacks by their own possession. Usually, a counter attack refers to playing directly after winning the ball. However, Conte can create this situation from playing from the back. In order to play in this unique style, ‘playing short to drag opponents out’ and ‘movements of attackers to receive the ball’ are essential and going to be analysed in this article.

Playing Short to Drag Opponents Out

Although the final objective is to break the opposition DF line, they prefer to play short to invite opposition pressure in deep area and break the line. By playing through the first line, it is possible to force opposition midfield players (MF) or fullbacks (FB) to step up to press. Then, the space in between the lines becomes bigger and attackers can receive the ball there with more time and space. In this chapter, how to break the first line is going to be analysed.

Basically, the first line of a pressing team consists of two or three attackers. Thus, there are always gaps between them and if playing through one of the gaps, it is possible to progress into a central area. 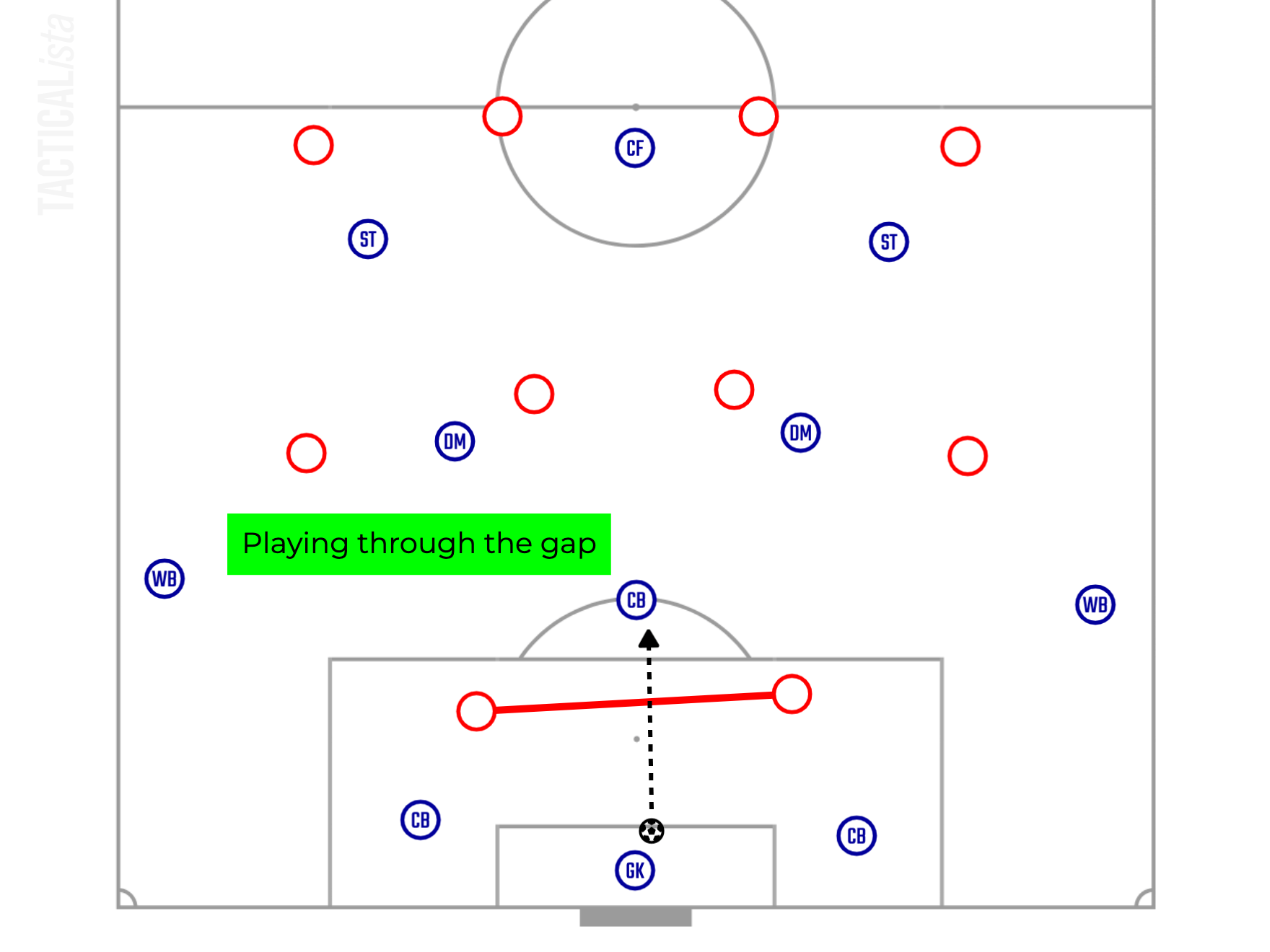 The players who try to receive the ball in the gaps change frequently. As the picture above shows, the central centre back (CB) of 3-4-2-1 staying in behind the opposition first line is one of the options. Another idea is one of the defensive midfielders (DM) dropping in that space.

Additionally, positioning in the gap is not only for receiving the ball. By standing between the opposition players, it is possible to attract attention of them. 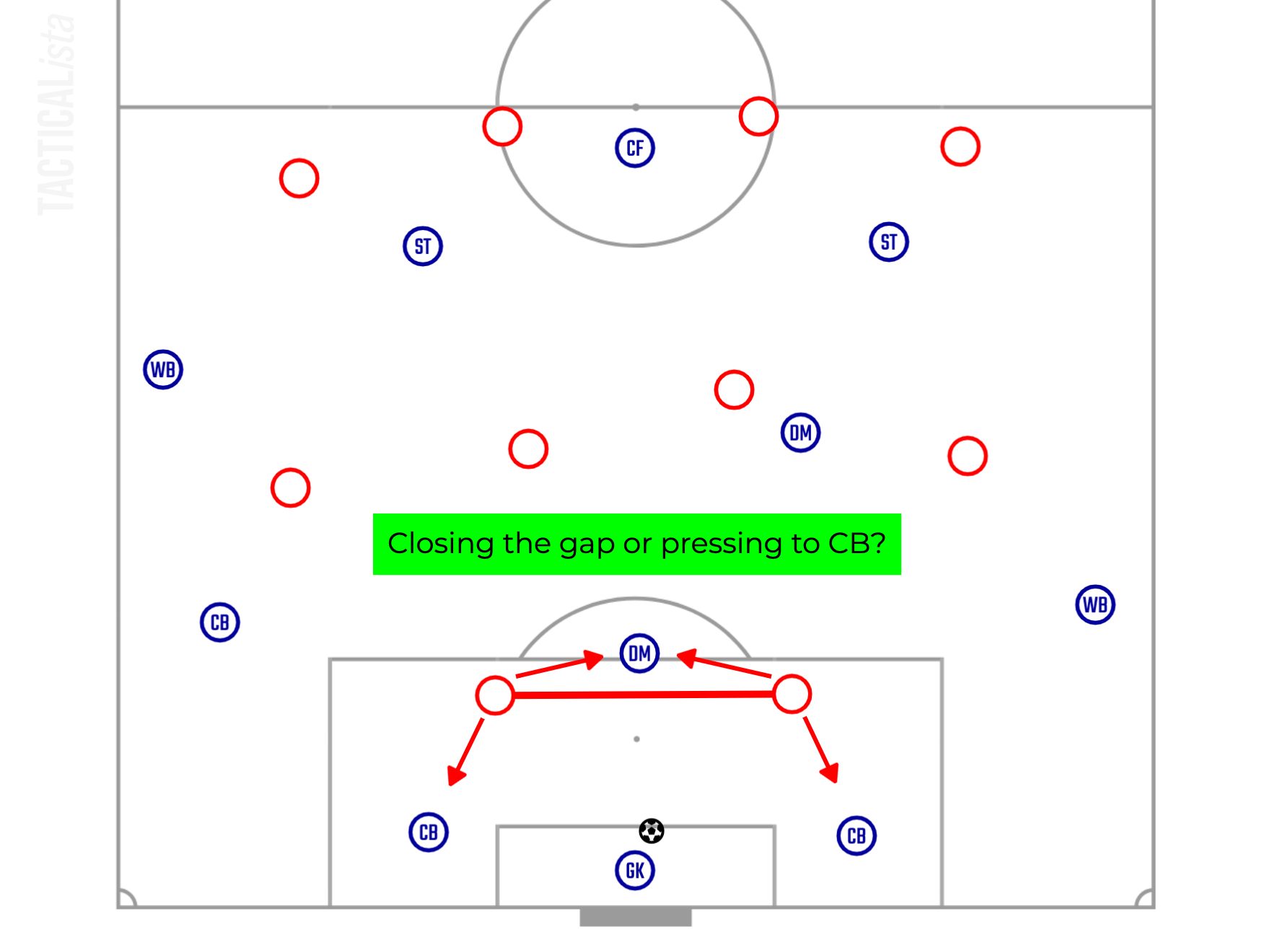 Consequently, opposition attackers cannot focus on just pressing, but they also need to think about closing the gap and preventing the team in possession from playing through the gap. Thus, the intensity of pressing can be lower than usual and it gives the goalkeeper (GK) or CBs more time and space.

In case of pressing with three attackers, the number of gaps is two. Thus, there needs to be two players in the gaps. 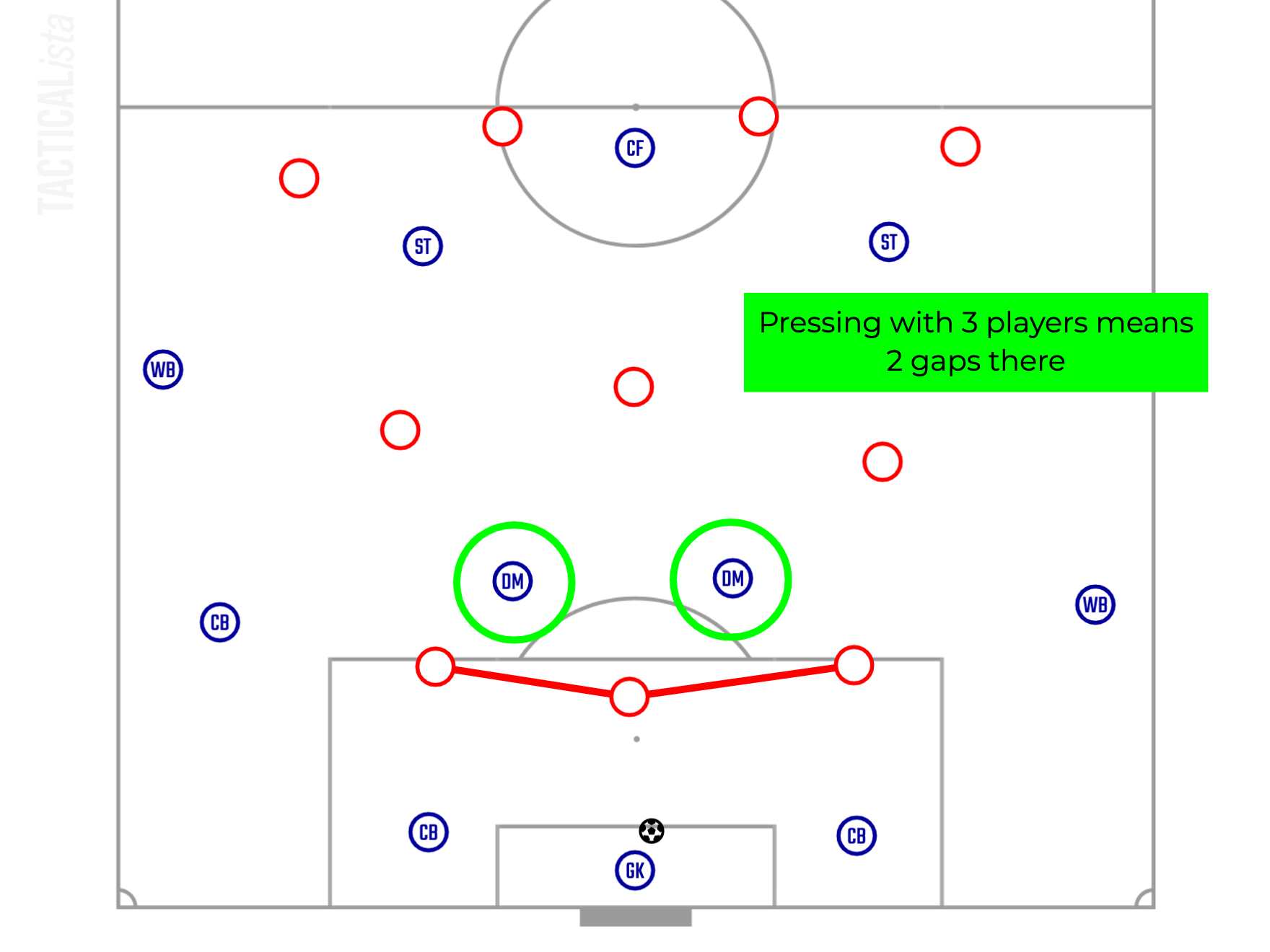 As these examples show, the number of players in behind the first line depends on the opposition pressing style. However, the shape of other four players around the opposition first line doesn’t change, although who are in these positions can alter.

2.Lofted balls into a wide player

If it is difficult to play through the first line, sending the lofted ball into a wide player can be another option. 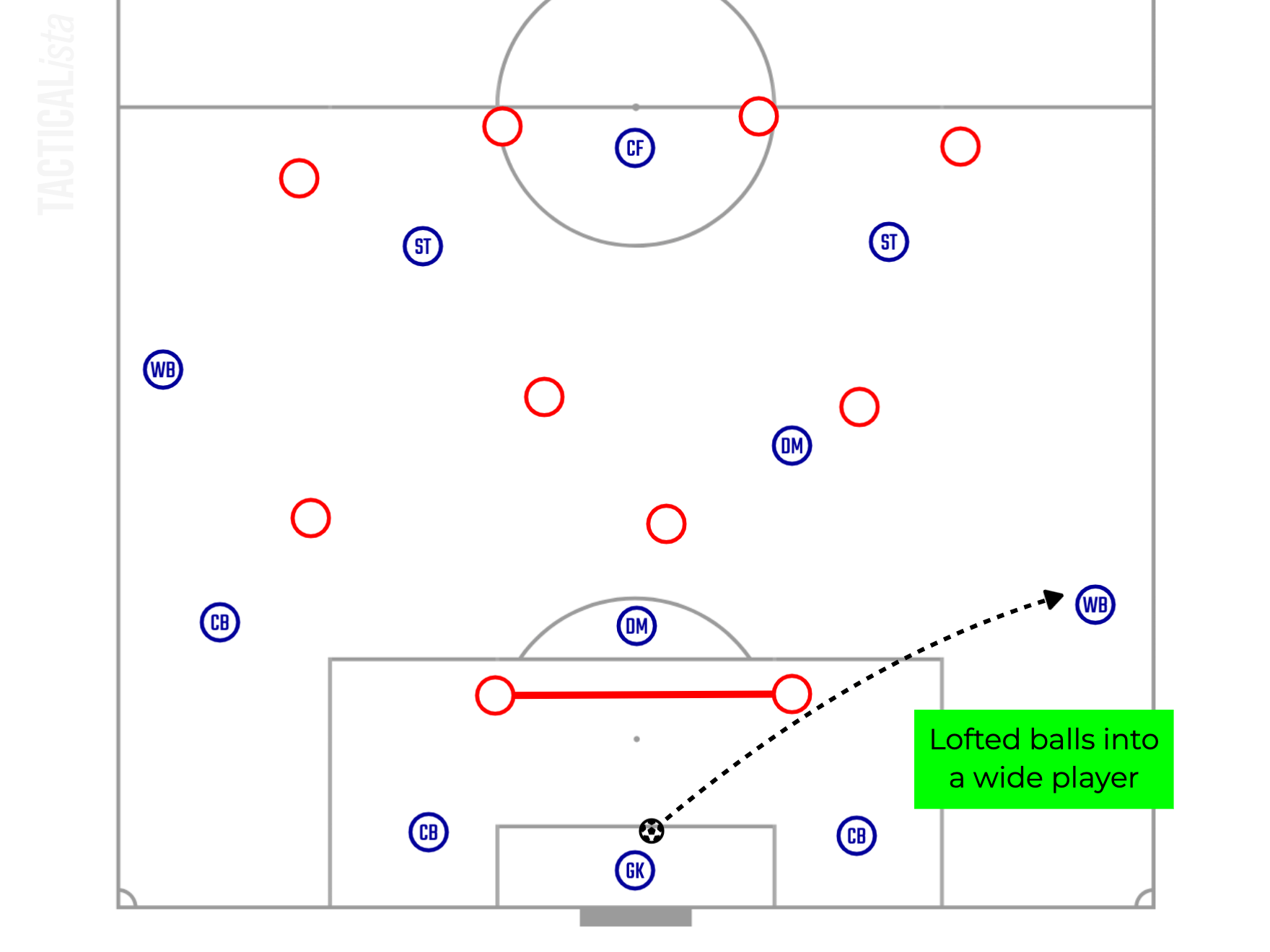 This is another way of breaking the line called playing over. After playing over to the wide player, the opposition MFs or FB need to press him and it causes gaps in the midfield or DF line.

If opposition attackers chose to close the gap instead of pressing to the CBs or GK, the GK would play to one of the CBs next to him and try to play around the first line. In this case, the triangles in wide areas are vital. First of all, let’s take a look at how to make this triangle. 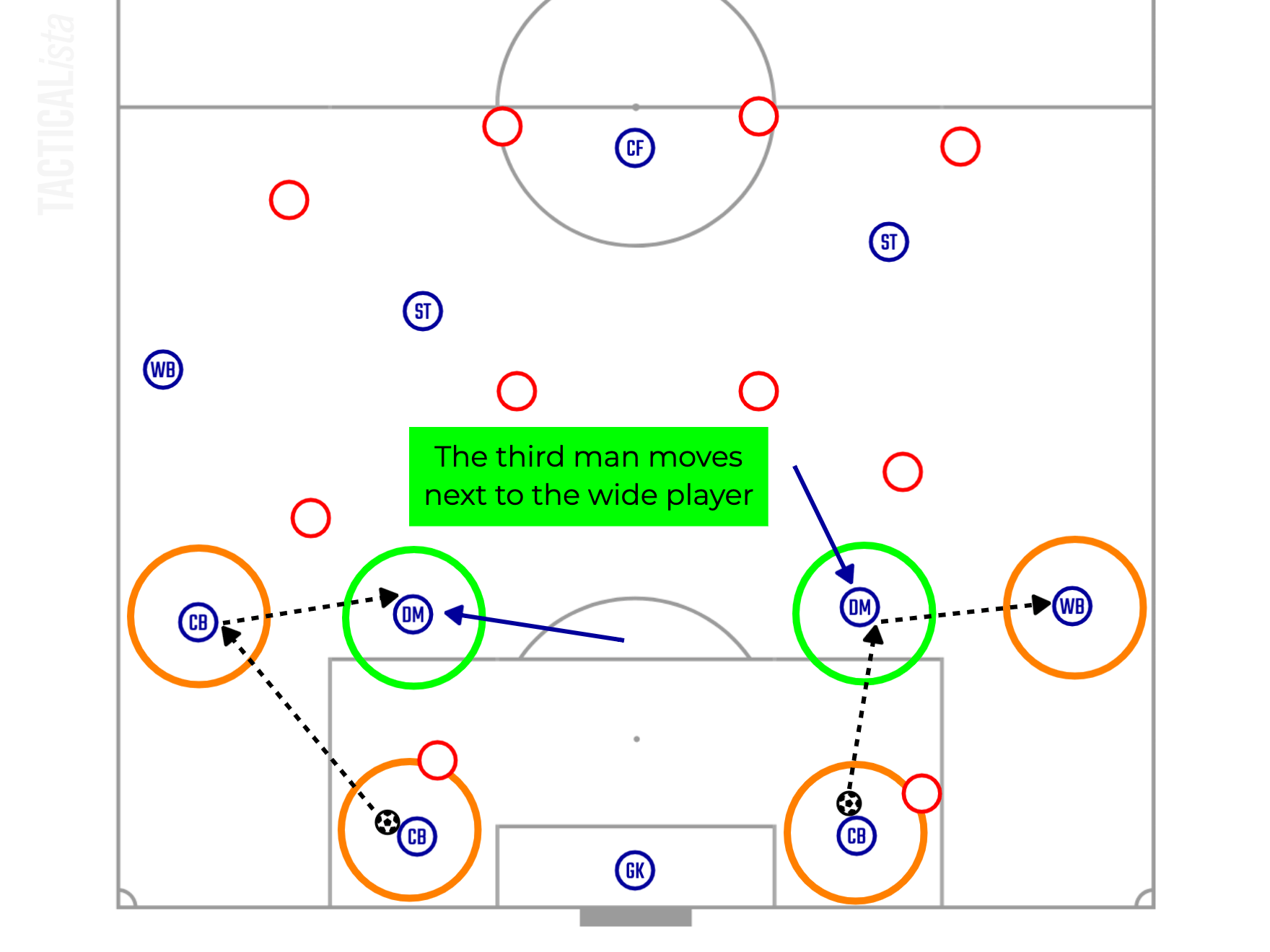 After making this triangle, players try to find a spare player by observing opposition pressing direction. Firstly, the overload situation of 3v2 is going to be analysed.

A defending player usually tries to press to the ball with cutting off one of the passing lanes when they need to press in an underloaded situation. Then, they create 1v1 on the ball and try to win it. Against this pressing, it is important for the team in possession to avoid being made 1v1 situation.

The most effective way is playing the passing course which the opposition defender tries to cut off. 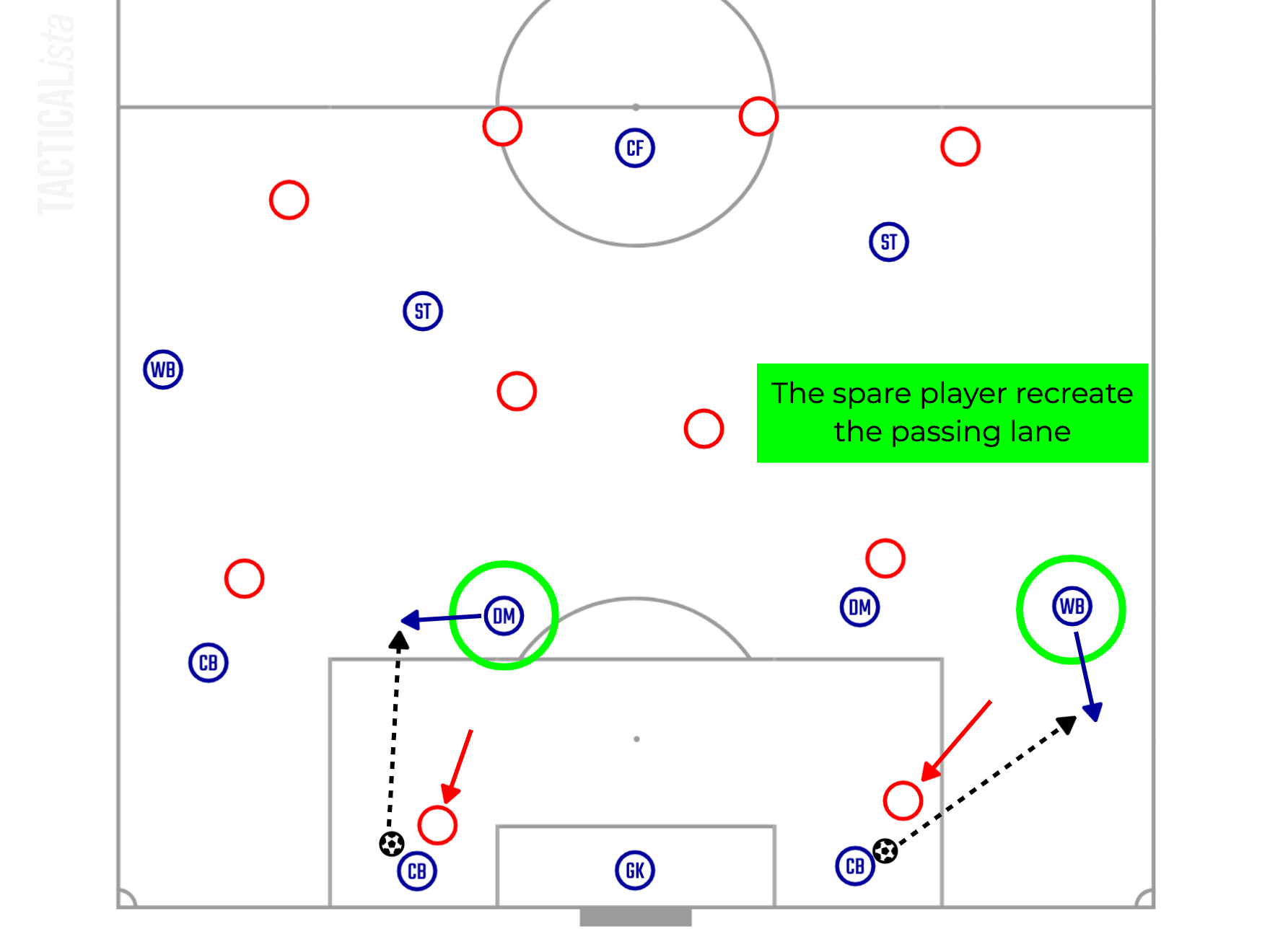 If the opposition team fails to screen a passing lane, it is impossible to create 1v1 situation to win the ball. Additionally, another defender chooses the player to mark based on which passing lane is cut off by the player pressing to the ball. Therefore, if the passing lane is still available, the team in possession can use a spare player easily. This is the simple answer but the most effective.

There are mainly two ways to find a spare player. The first one is passing to the spare player first time. The third man movement from central area is key to do this. This support must be quick enough to give an option for the player on the ball before being tackled. Another way of playing to the spare player safely is dropping back to gain space and time to receive the ball away from the pressure. When the opposition defender tries to press from his back, it is essential to run towards the own goal and move away from the opponent. Thanks to this movement, it is possible to avoid a duel which the opposition defenders try to create. 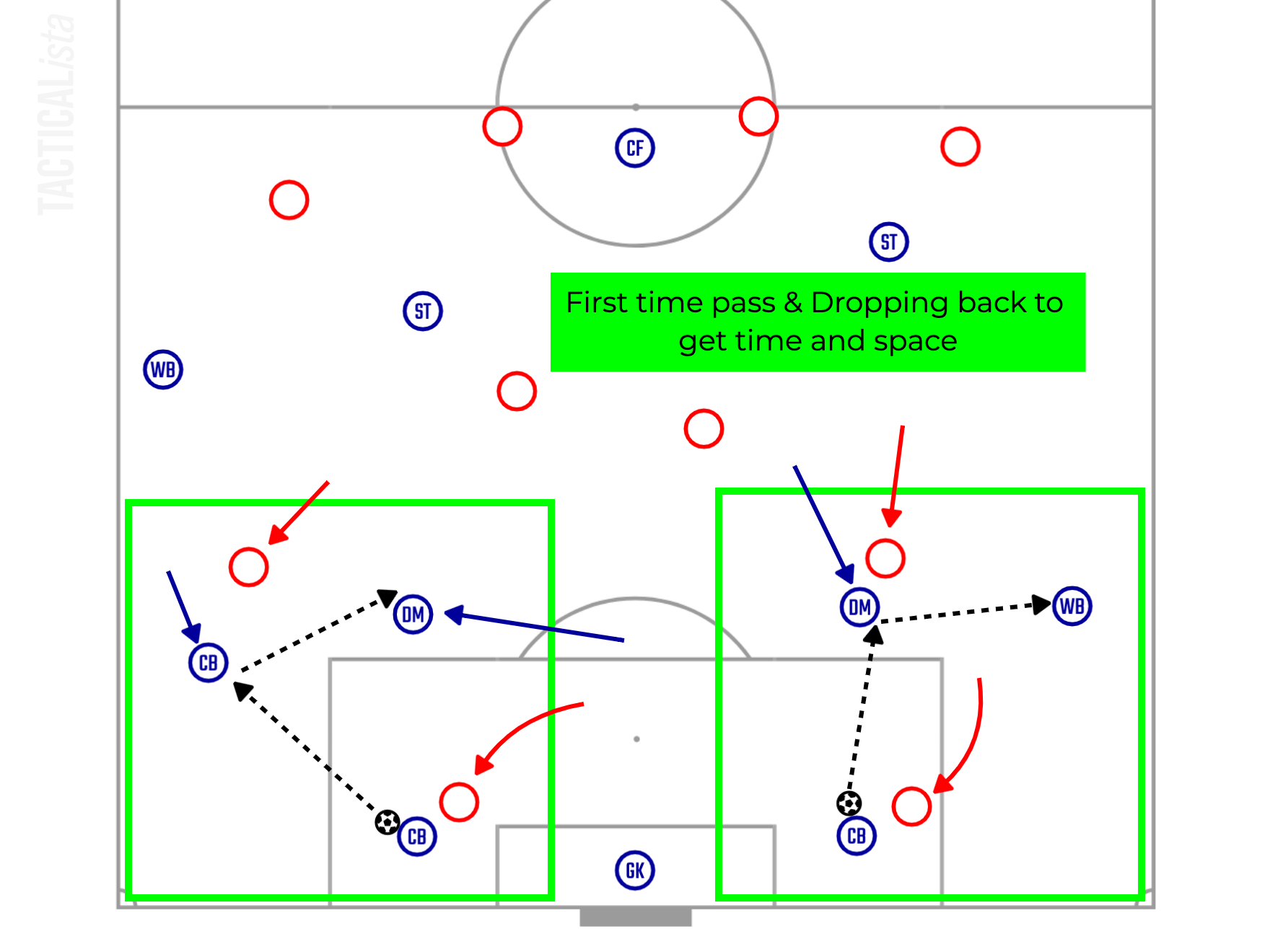 The movement towards the own goal becomes more important when the opposition team tries to create numerically equal situation around the ball. When the opponents try to press with three players against the triangle, the best way is sending the ball into the space in between the lines. In order to complete this pattern, it is important to create a player who is comfortable to play the ball forward. In detail, if the player on the ball faces backward, it is difficult to play forward. Therefore, letting the player on the ball face forward is one of the objectives in this tight area. 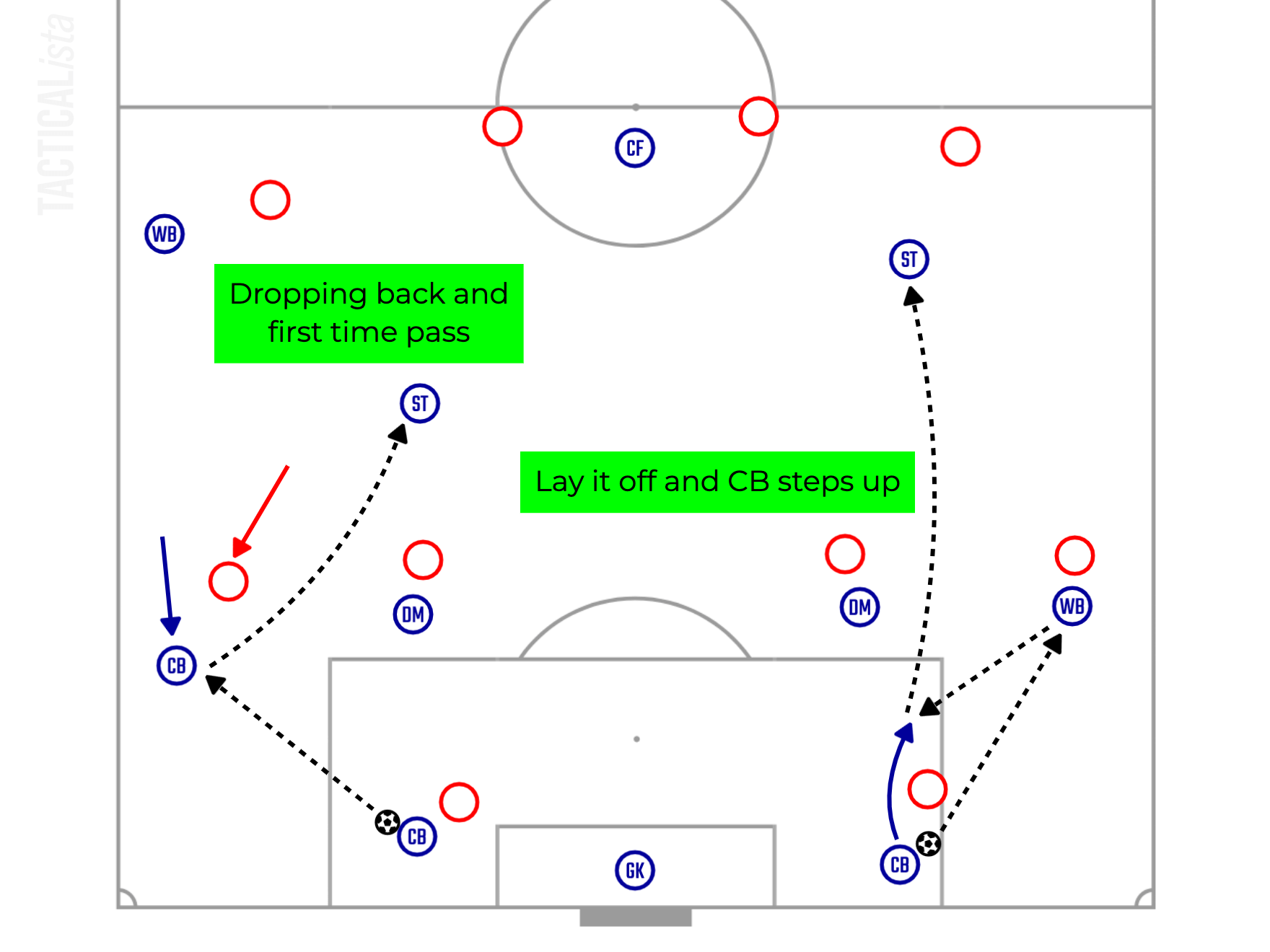 As this picture shows, dropping back to receive the ball and passing to the player in between the lines first time by the far foot from the marker is one of the ways to plying through the pressure. If it is a 3v2 situation, the player moving towards the own goal and receiving the ball would play to the spare player next to him. However, if the opposition team presses the ball with same number of players as the picture shows, he needs to find a spare player in between the line.

On the other hand, sometimes it is difficult to let the player on the ball face forward when opposition pressing is hard and tight. In this case, playing horizontally to escape from pressure by finding a spare player in central area is one of the solutions. 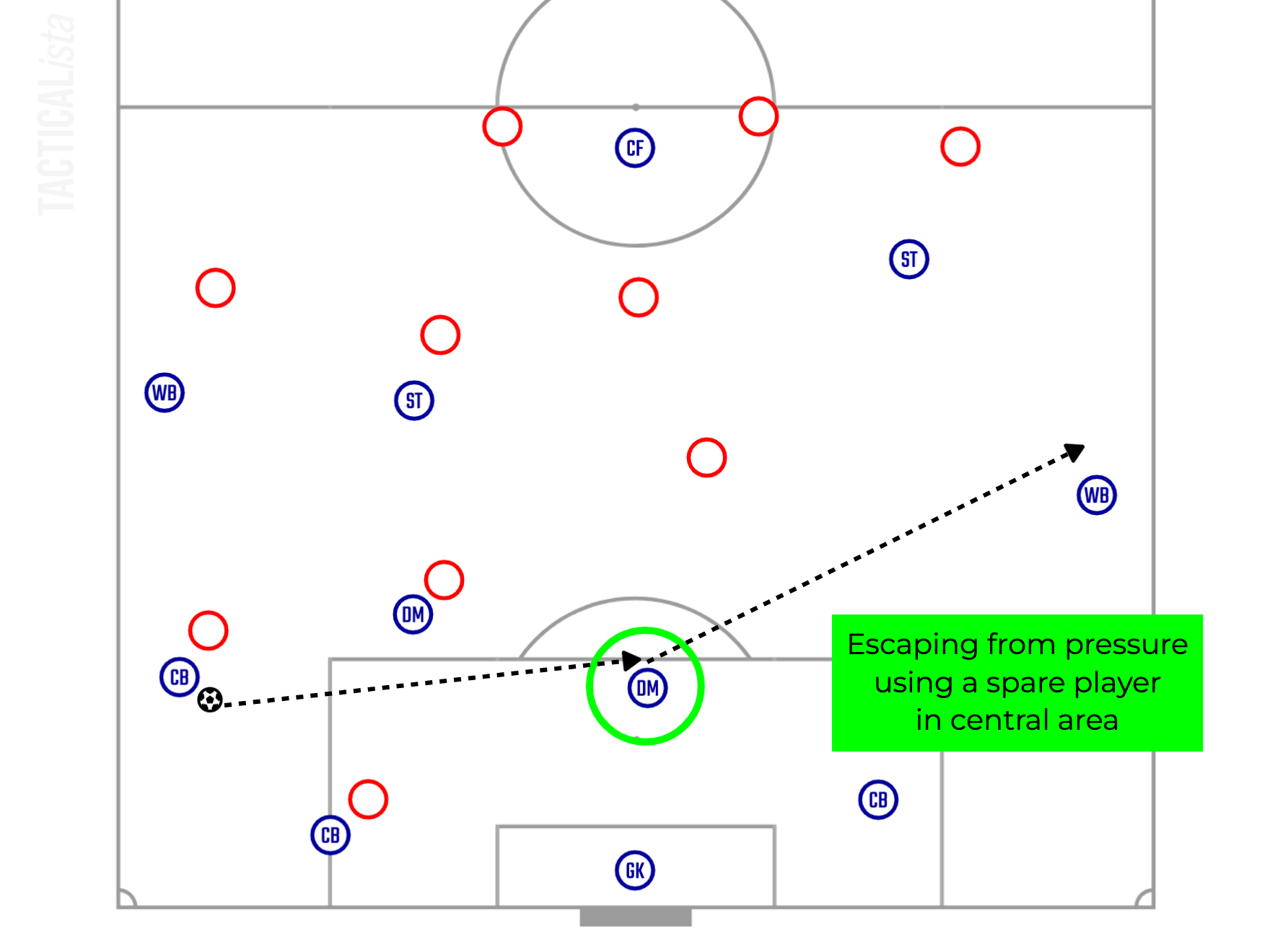 The opposite side MFs or GK can be a spare player to play horizontally and they try to play to the opposite side wing back (WB) who has space and time. Sometimes lofted balls are used to play over the pressure and if bypassing pressure well, it is possible to progress the ball.

Movements of Attackers to Receive the Ball

After keeping the possession in deep area and dragging the opponents out, attackers move to receive the ball from the back and try to attack the goal quickly. In this scenario, again, the most important idea is how to let the player on the ball face forward. 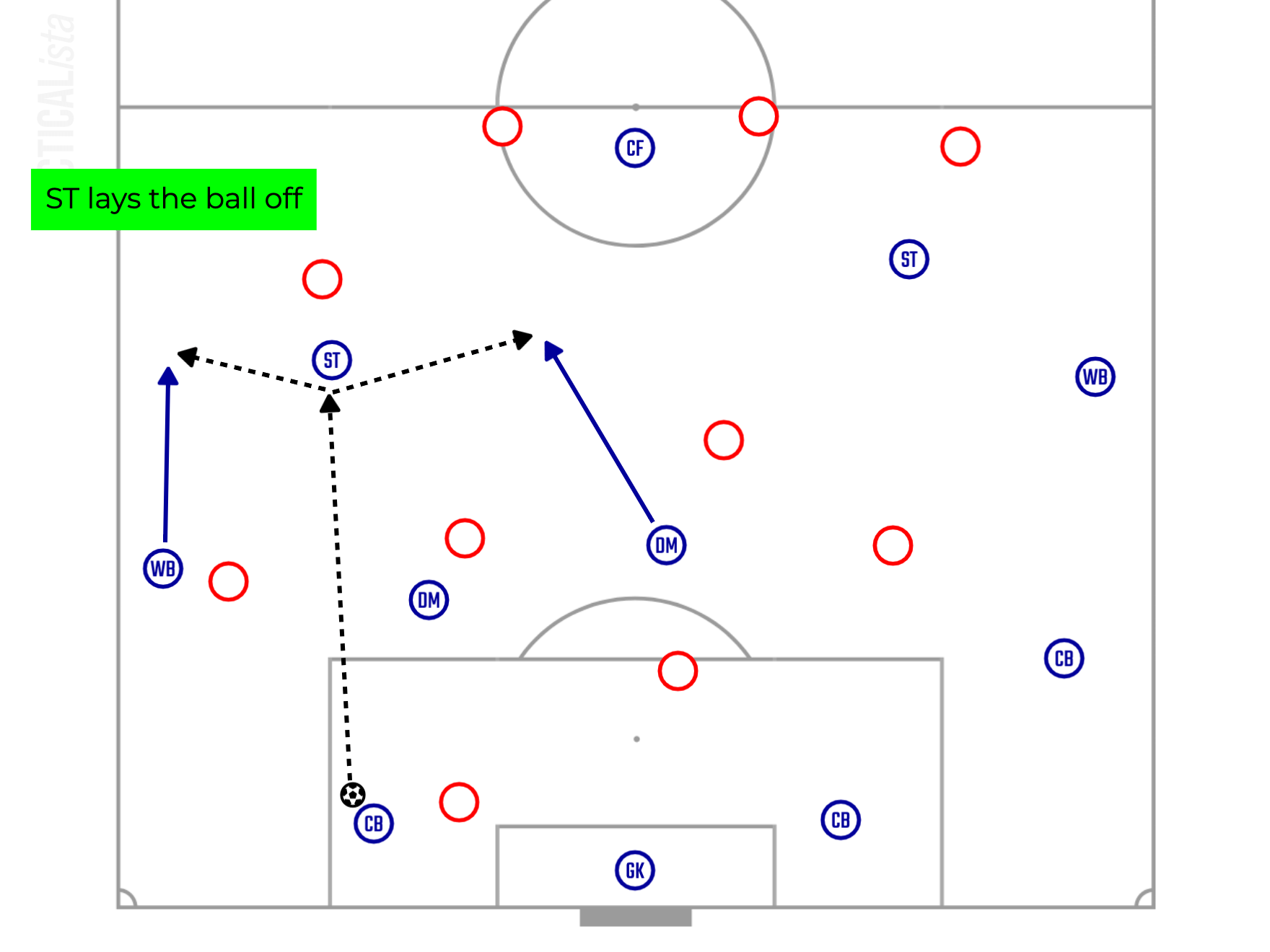 Additionally, when someone receives the ball and faces forward in between the lines, the opposite side ST and WB run in behind and attack there quickly. 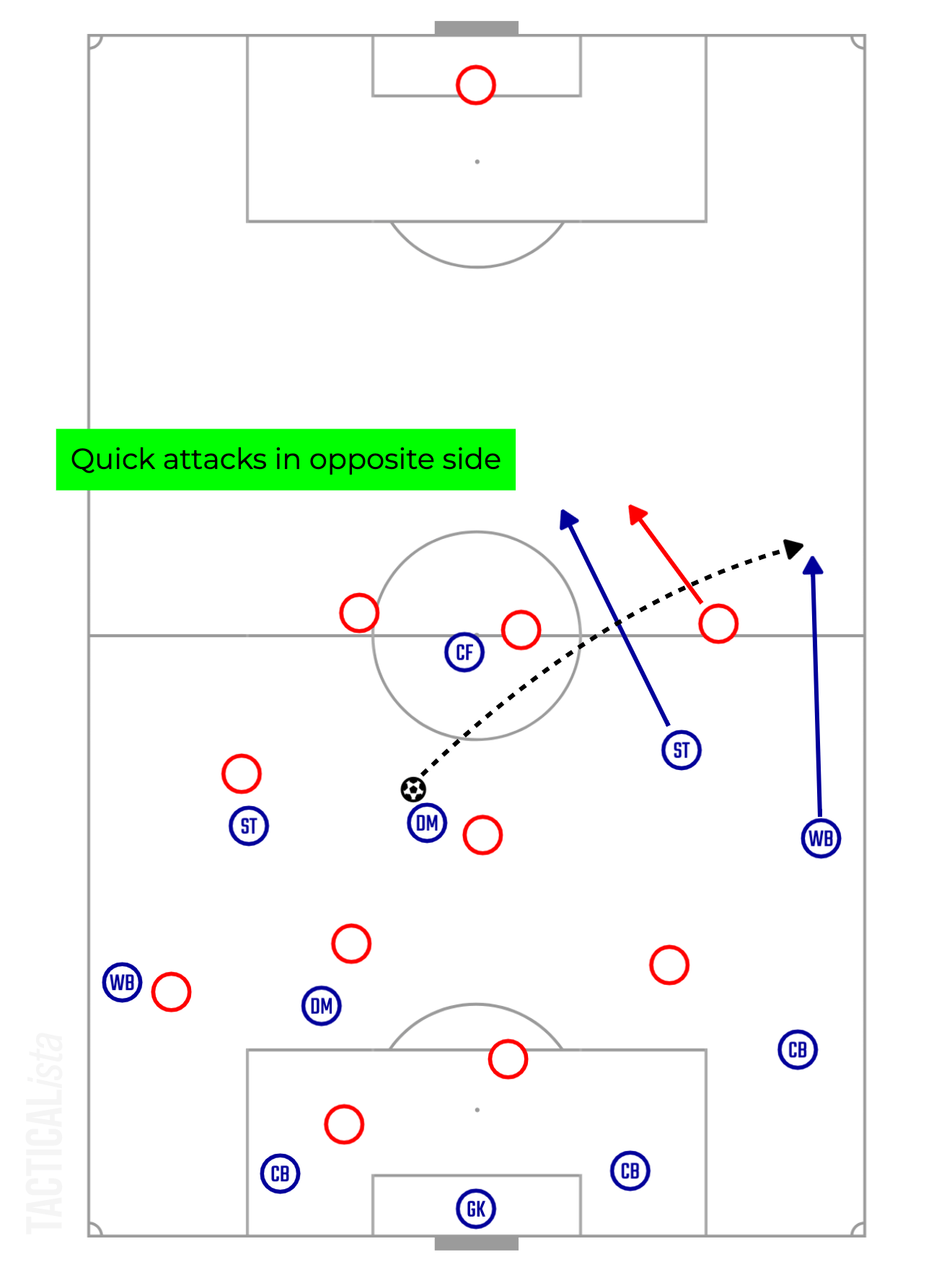 The pattern of playing horizontally and using the opposite side is also seen when using the gap from the GK or finding a spare player in central area from the triangle. The principle here is after playing to a spare player facing forward in central area, playing to the opposite side WB. This can lead quick attacks in a big space where few players defend. 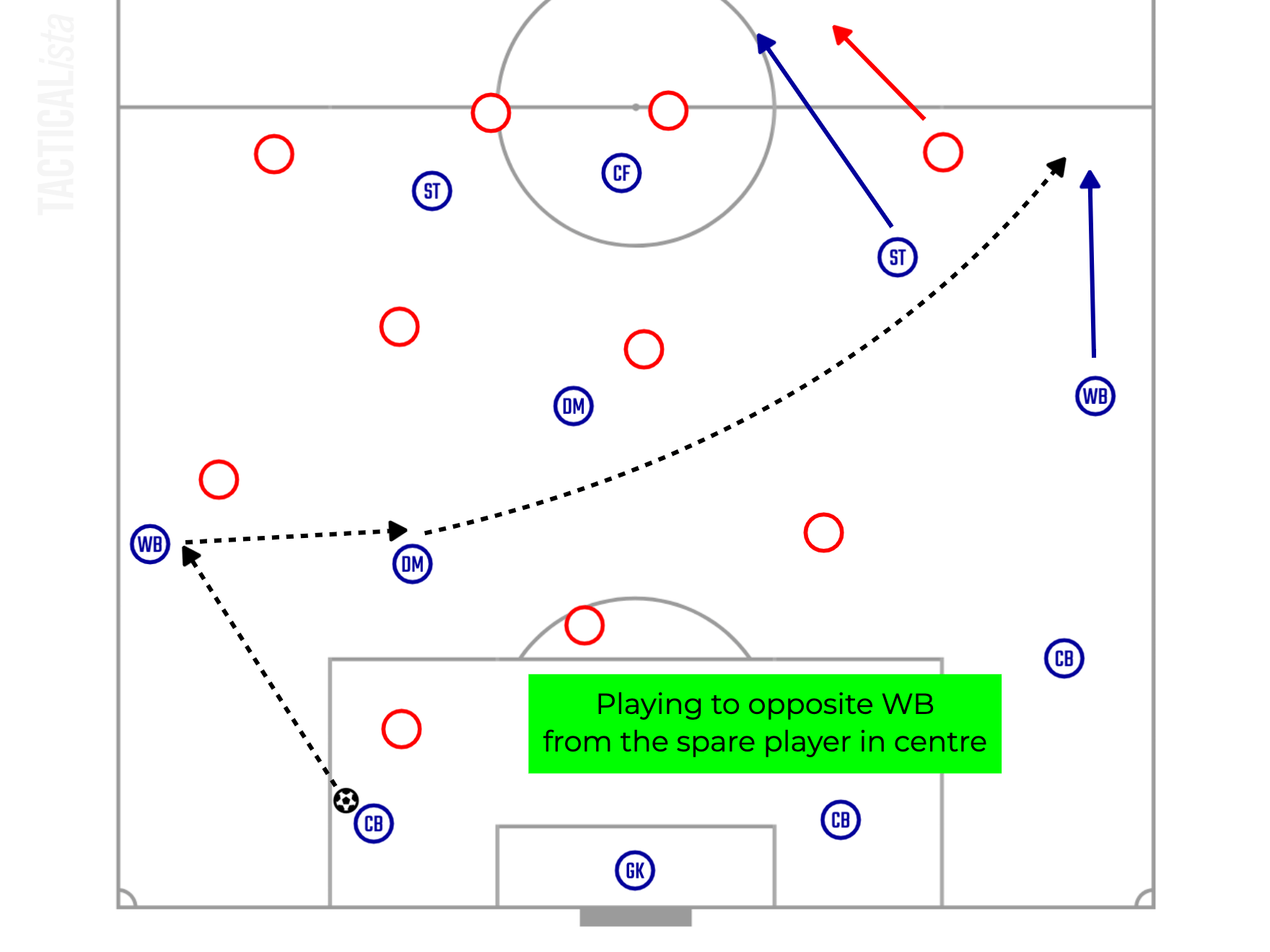 Moreover, if it is difficult to play to ST due to tight marking, the centre forward (CF) drops back and receives the ball. In this case, both STs try to run in behind so the opposition CBs cannot keep marking the CF. if one of the opposition CBs tracks the CF, it creates a huge gap in the central area which can be exploited by STs. 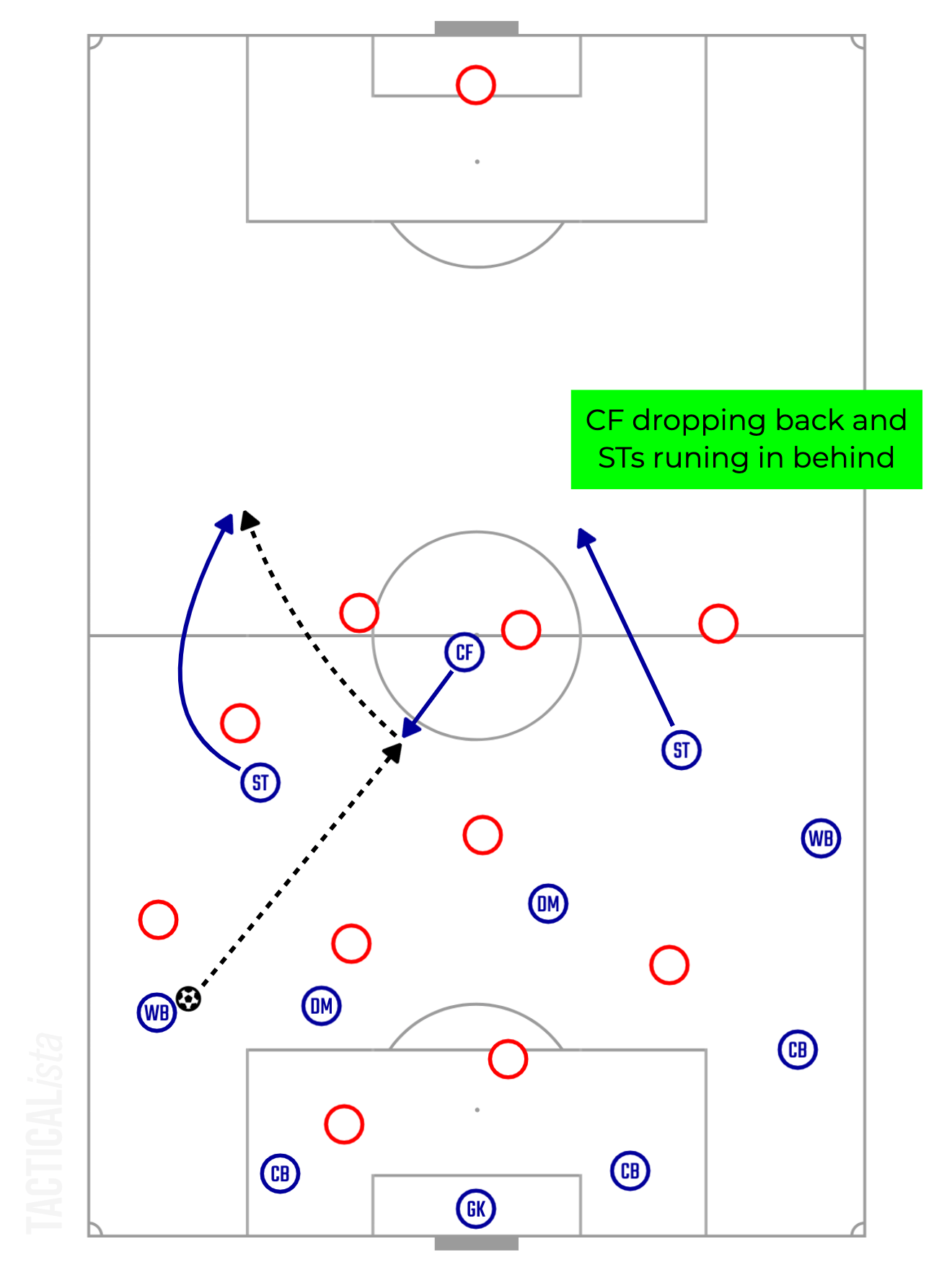 These three attackers’ movements help to receive the ball in between the lines and attacking the opposition DF line which is disroganised by them. This is the final objective of Conte’s football. After that, just scoring the goals.

We can learn how to keep possession by observing opposition pressing direction in the numerically equal situation from analysing Conte’s football. It is important to understand not only team tactics such as creating overload to keep possession or 1v1 duels to win the ball but also individual tactics such as choosing a right passing lane by observing pressing direction, recreating a passing lane or dismarking the opponent to gain space and time. His football is a textbook for understanding them.