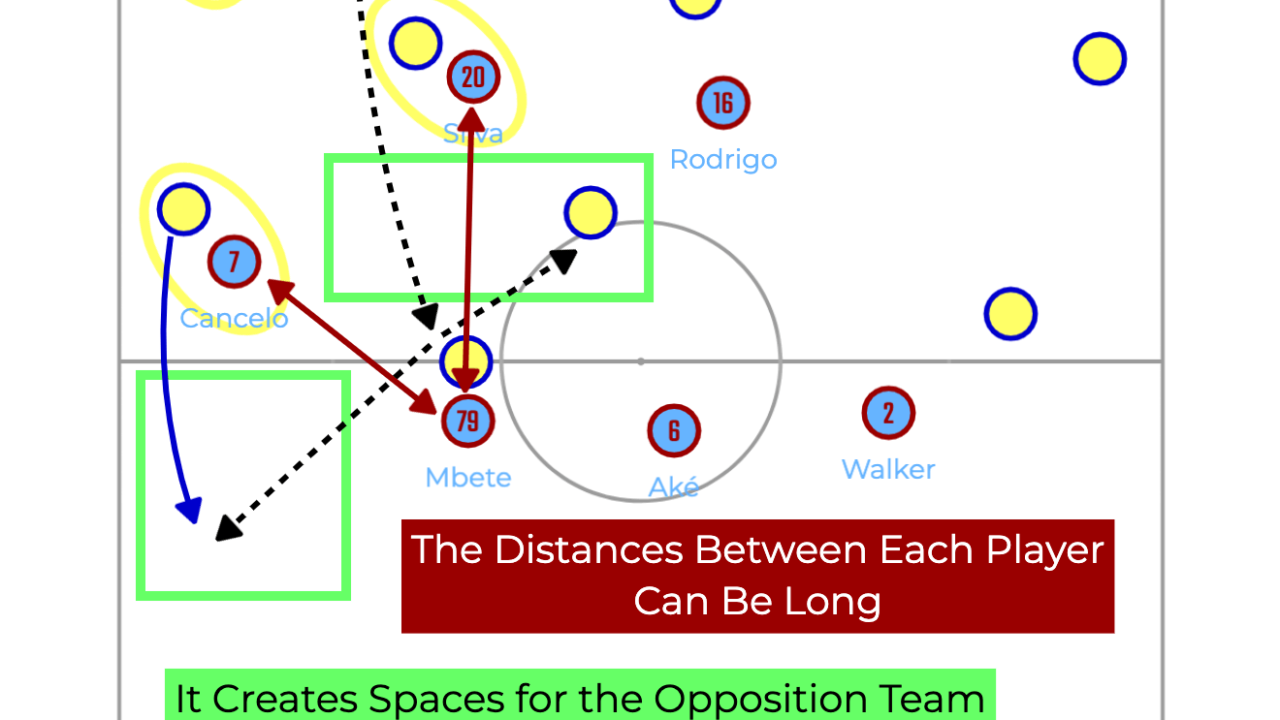 Manchester City have concluded their preseason tour in the USA with two narrow wins against Club América and Bayern Munich. The Premier league champions could sign two strikers, Erling Haaland and Julián Álvarez, who both can play the role of traditional strikers and seem to play more directly towards the goal. However, both two goals against Club América were scored by Kevin De Bruyne in his style and the one against the German champions was a tap-in by Haaland from a set piece. In this article, the reason why new City looked same even though they signed two strikers and how they are going to play in the new season will be explored.

Pep’s City is always recognised as a possession team but the high intensity of pressing should be also highlighted. One of the main reasons why City try to press high is, of course, to regain the ball as soon as possible to keep playing with the ball in the opposition half. However, what City players did after winning the ball by high or middle pressing was not trying to keep possession again but attack the goal directly. Especially, De Bruyne can play through the opposition final line thanks to his vision and power on the ball and both wingers and the striker are ready for running in behind. This is not the traditional way of Pep Guardiola, which is making more than 15 passes after regaining the ball in order to reorganise the positions.

But why has he changed to play more directly after winning the ball? One of the reasons of this can be that it is getting more difficult to break down the opposition low block due to the evolution of defending the goal in the final third. These days, more and more teams know how to defend against City. For example, back five can close the gap between the defenders to defend the channel or five midfielders can prevent them from playing through the line and exploiting the space in between the lines. Therefore, City need to find another way of scoring goals. One of the solutions is counterattacks from high or middle pressing.

Then, how City try to press is going to be discussed. In both preseason games, City utilised same pressing style. In high pressing, they tried to mark the opposition players as soon as possible and force them to play long. If City needed to defend in the middle third of the pitch, they organised a compact 4-4-2 block with De Bruyne stepping up to the first line and pressed on the ball in the proper moment. Basically, higher they press, earlier they change from defending the space to marking the opposition player. In next chapter, the detail of City’s pressing is going to be analysed.

Firstly, how to force the opposition team to play back when defending the middle third is going to be discussed. As it was mentioned earlier, City organised the compact 4-4-2 block and waited the right moment to press on the ball. The defensive block is compact both vertically and horizontally, which make it difficult for the opposition team to play into the space in between the lines. On the other hand, it is possible to exploit the space in the wide areas or behind the defenders. Thus, City need to prevent the opposition teams from playing into these spaces. In order to cut the passing lanes to the wide players, wingers often apply pressure on the opposition centre backs from outside, which forces them to play forward or backwards. This is because if the centre back tries to play a split pass into to one of the midfield players, he will find it difficult because both strikers cut the passing lanes to the defensive midfielders and Rodrigo or Bernardo Silva is ready to mark the attacking midfielder. Therefore, the centre back has to play backwards or long forward. 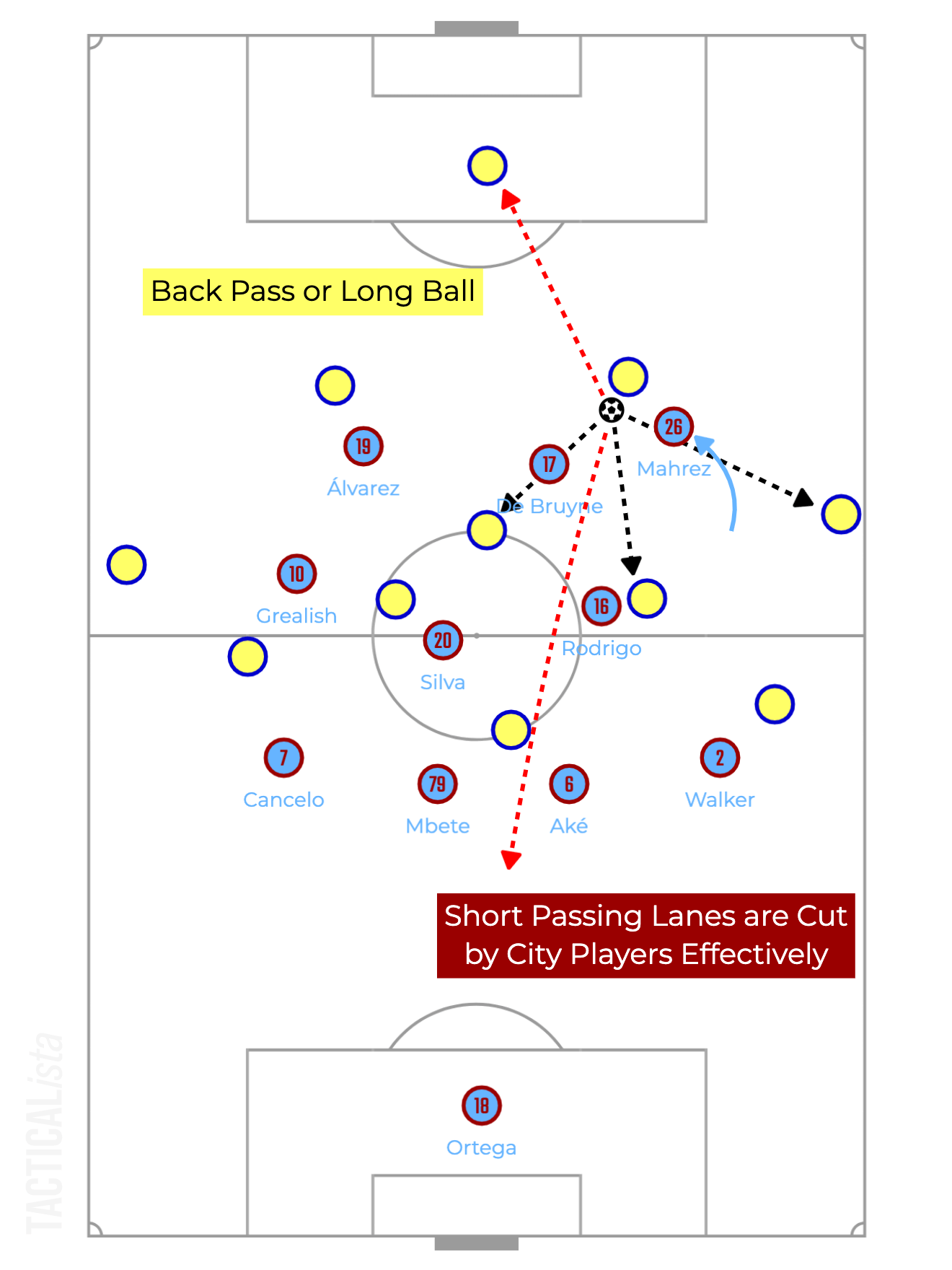 However, City still have a problem of dealing with those long balls. To be fair, this is not the problem of this preseason, but they have left this unsolved for a long time and this is why they conceded the second gall against Aston Villa in the final game of the last season. The main reason is the timing to mark the opposition players is sometimes little bit earlier, which makes it difficult to secure the second balls or covering the space in behind. When City apply high pressure on the opposition centre backs or goalkeeper, the players around the ball try to mark the opposition players to prevent them from playing short. Therefore, the distance between each player can be longer, which creates big space and makes it difficult to regain the second balls or defending the space in behind if the opposition player chooses to play long. 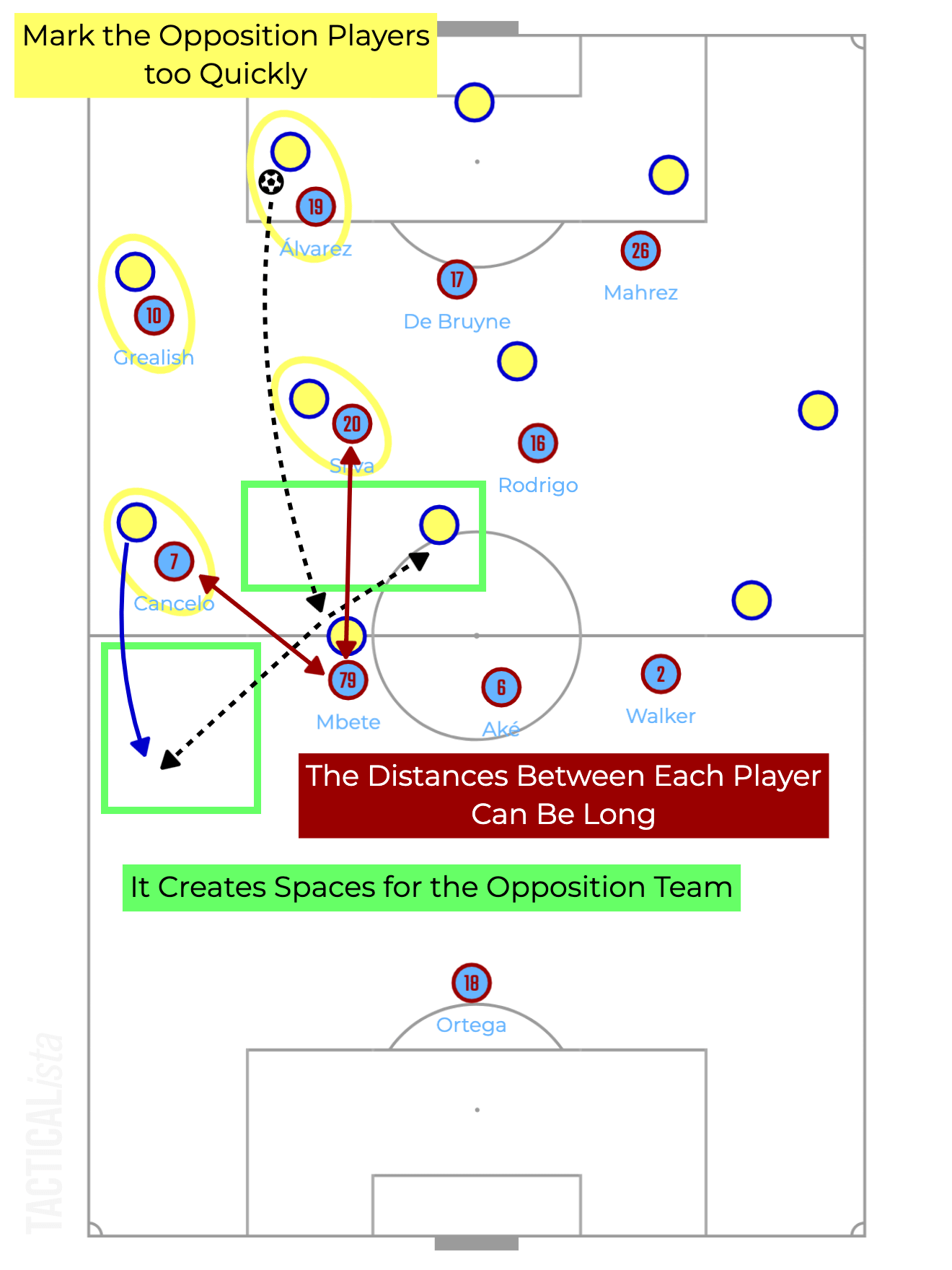 Therefore, the ideal way of regaining the ball is winning it when the opposition centre back plays short into the middle area where Rodrigo or Silva is ready for tackling or intercepting the ball. After winning the ball there, both wingers or the striker run in behind and try to receive the excellent ball from De Bruyne. The wingers often position themselves in higher area of the pitch in order to press on the centre backs and this is beneficial when playing counterattacks. They can immediately run into the channel and lead the counterattacks.

Overall, this tactic is executed thanks to the pressing ability of both Álvarez and Haaland. They can apply pressure and lead the pressing. If they can score a lot from counterattacks which have begun from their own pressing, City can have another source of scoring goals.

Although the pressing and counterattacks were discussed in the previous chapter, keep possession and dominate the game by maintaining the structure are still the main option to win the game. Their possession skill and tactics are mature enough and there was nothing new in both preseason games. The main system is a 4-1-2-3 but they are flexible and adjust it to each phase of the game. As it was discussed, they mainly change it to a 4-4-2 by pushing De Bruyne to the first line when defending. On the other hand, City utilised two different but familiar systems in possession.

Against Club América, João Cancelo, the left fullback, moved next to Rodrigo and City played with a 3-2-5 in possession. Cancelo hardly played this role last season, but this task is a traditional false fullback which Pep brought to City. 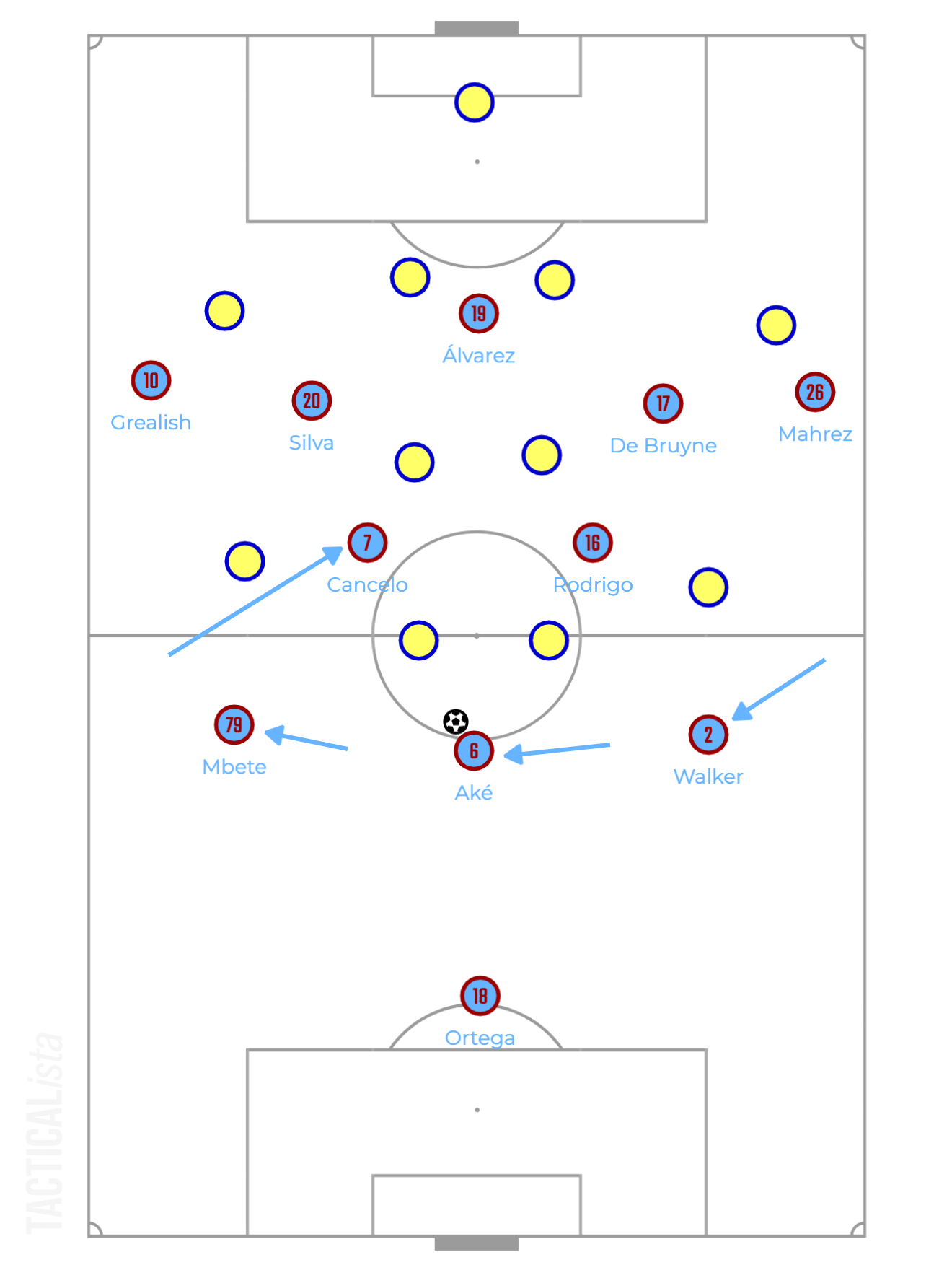 In the second half, Cancelo was replaced by Josh Wilson-Esbrand who can be described as a winger-fullback. Therefore, Silva dropped next to Rodrigo, Jack Grealish came to play in the left half space and Wilson-Esbrand gave City width in the higher area of the left side. Thanks to this kind of rotation, City maintained the 3-2-5 throughout the game. 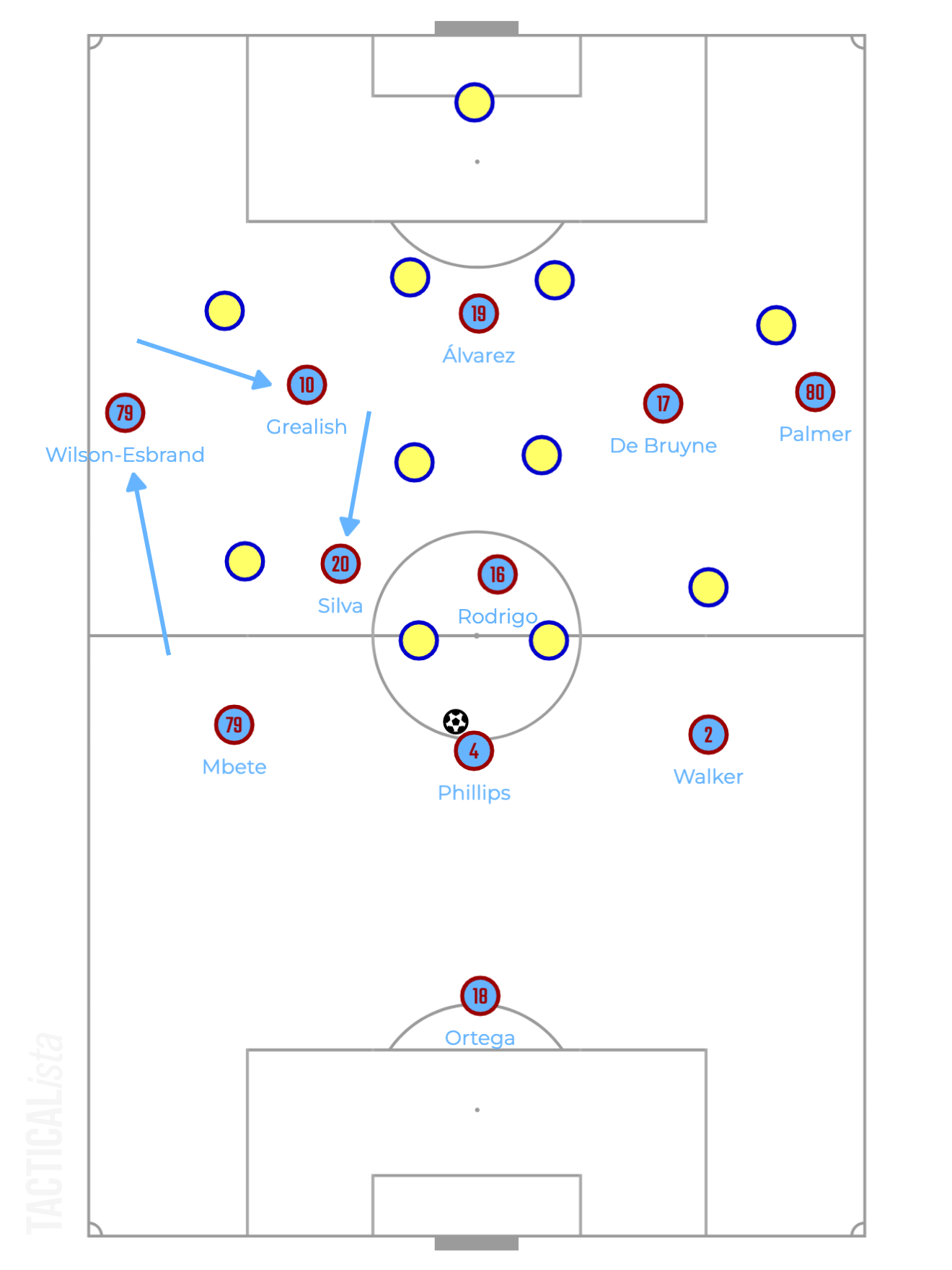 On the other hand, against Bayern Munich, City played with a 2-3-5 in possession with Cancelo starting as a right fullback and Wilson-Esbrand playing as a left fullback. There are two reasons why City did not play with the 3-2-5 and keep both fullbacks wide and deep. Firstly, in order to maintain back three, Kyle Walker is necessary. He is excellent at playing as a right centre back both keeping possession and defending counterattacks. However, Cancelo and Wilson-Esbrand are attacking-minded and like to play in the attacking third. Therefore, City could not build up with the back three. Another reason is Bayern’s formation. The German side pressed with a 5-3-2, which means City needed to use the space in deeper wide areas to drag three midfielders out. Then, the players who receive the ball in those areas are both fullbacks. Therefore, they were required to stay in original fullback position and did not need to come inside or go higher. And this is also familiar system of Pep City. 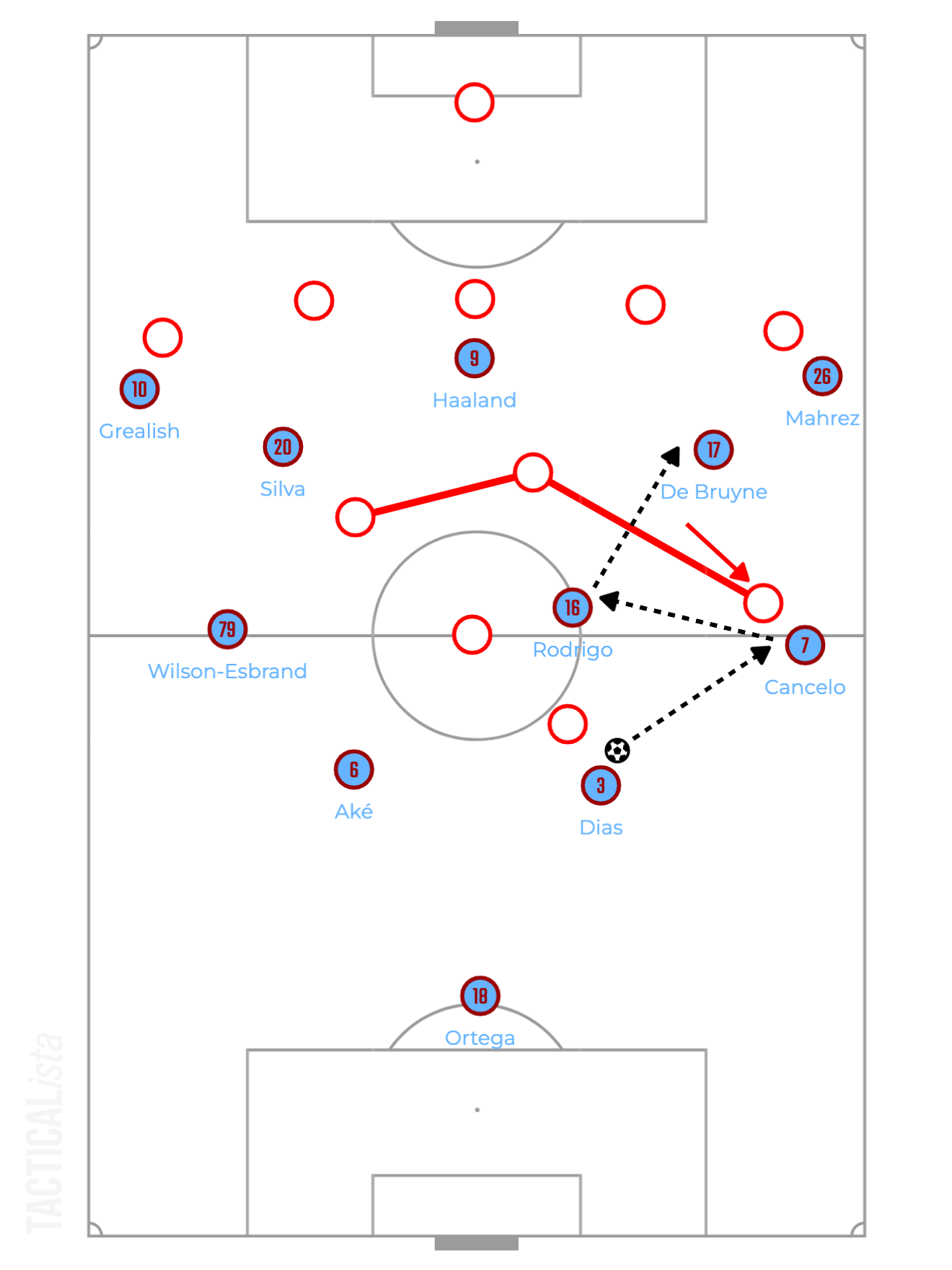 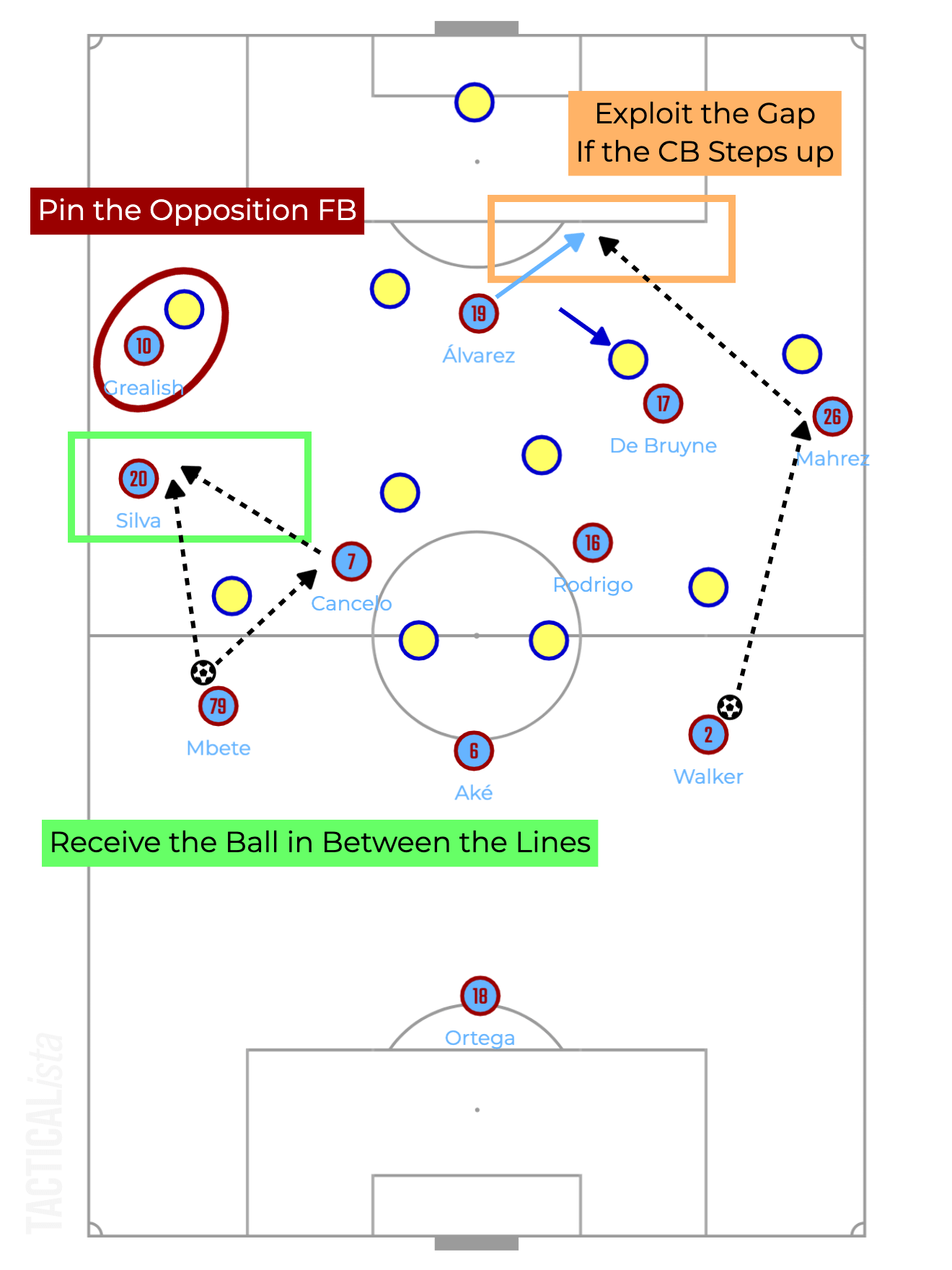 Of course, if the opposition teams fail to close the gap between the defensive midfielders, the striker, especially Álvarez, can drop and receive the ball in the middle of the opposition defensive block. These methods are completely same as previous seasons, and this is why City in this preseason did not look new.

In this article, the tactics and ideas of new City was discussed. Obviously, this is still preseason and some important players did not play, so it is difficult to evaluate their performance. However, some new ideas or problems were found in these two games, and it is interesting to see what will happen in the new season. Thank you for reading.