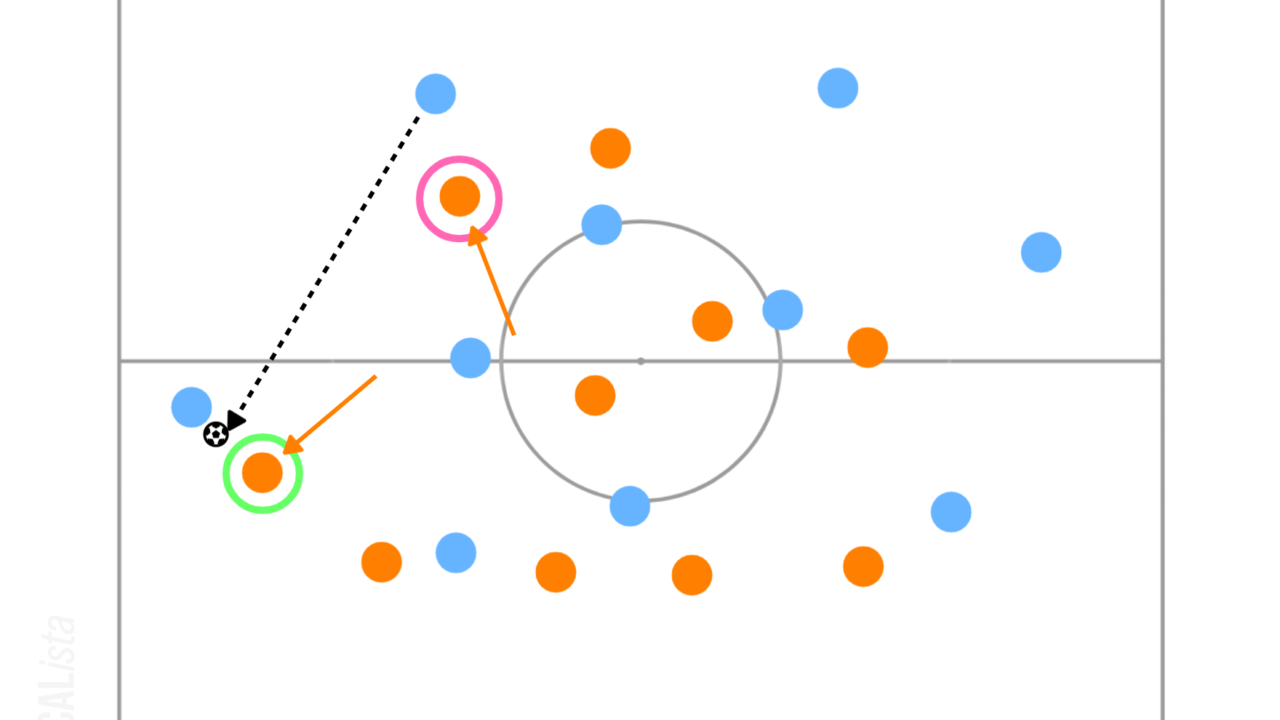 It is important for a team out of possession to defend wide areas because the space for the opposition team in possession is limited by using the touchline as a defender and it is a great opportunity to win the ball. However, jumping to press to the opposition players in a flank can leave the space in middle which is the most important area in football as the goals are in the middle of each goal line.

Who will move to the outside to press on the ball can be divided by mainly two categories, which are the outside player in the midfield line or back line. Additionally, the number of each line is also crucial in terms of the intensity, direction or difficulty of pressing. In this article, how to defend wide areas in the midfield or defensive third and the characteristic of each method of pressing are going to be analysed.

Why Is It Important to Defend Wide Areas?

It is obviously vital to defend the middle lane of the pitch as the goal is in the middle of the goal line. However, if focusing on closing down the space or passing lanes in the middle, the opposition can easily break the line by playing wide and progress the ball. Therefore, someone needs to apply pressure to the opposition player in the flank to prevent them progressing the ball around the box where dangerous crosses can be delivered. However, moving towards the wide area means space can be vacated in the middle. In other words, the team in possession often plays wide to move the defenders to create a gap in the middle to invade the most dangerous area. Therefore, how to defend wide areas need to be considered and planned very well.

Wide Midfielder Press to the Outside

At first, the pattern of the outside player in the midfield line pressing to the opposition wide player is going to be analysed. The system of the defending team is a 4-4-2 now, and other systems will be discussed later. 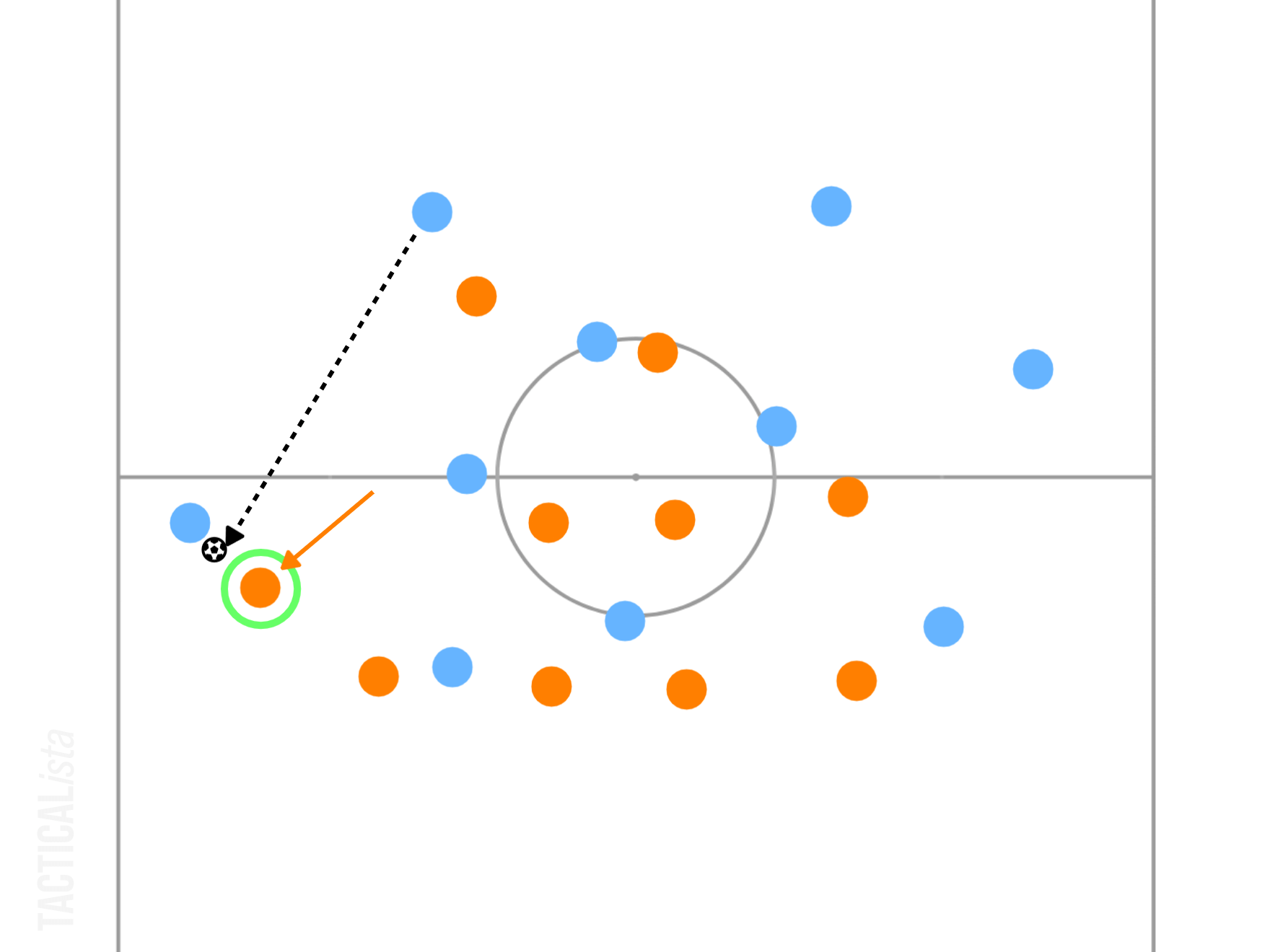 The advantage of this pressing is the back line doesn’t need to shuffle across and keeps defending the middle lane. Therefore, if the opposition player plays in behind, the back line can easily deal with the long ball.

However, there are some disadvantages. By the wide midfielder moving to the outside, there will likely be a gap between midfielders unless all of them shuffle across perfectly. Thus, it is easy to defend long balls in behind but may be easy for the opposition player to find a gap to play in between lines. Additionally, the direction of pressing is backward or at least horizontally. Therefore, the opposition player on the ball has space in front of him so he can progress the ball or play forward, which prevents the back line pushing up. Moreover, if it is in the defensive third, the opposition player on the ball can deliver crosses into the box.

In short, having the wide midfielder press to the opposition wide attacker can be very defensive as defenders can defend long balls or crosses with the maximum number of defenders, but it is difficult to keep pushing lines up and prevent the opposition from progressing the ball forward.

Fullback Press to the Outside

Another method is the fullback in the back line jumping to press the opposition wide attacker. 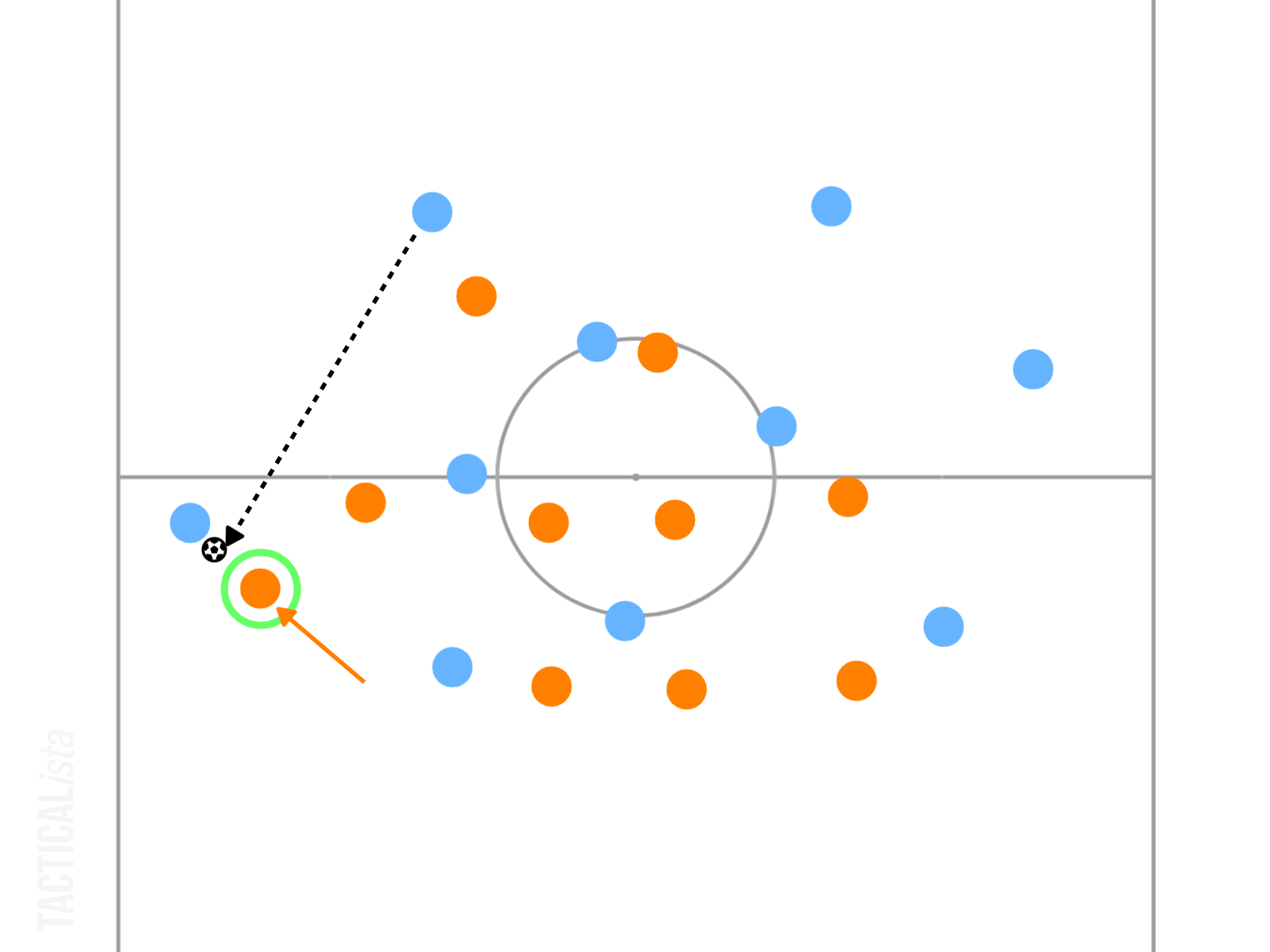 The advantage of this is being able to apply pressure forward. It can reduce the space in front of the opposition player to progress the ball. Additionally, the midfield players can stay in the middle so there are no gaps to play through in the middle.

However, as one of the defenders moves outside, there will be a gap between defenders unless they shuffle over perfectly. The gap is often made between the fullback and ball side centre back because the centre back tends to stay in the middle to defend the goal. This gap is recently regarded as another target in attacking in the final third. It is less effective to deliver crosses from the outside of the box, but if playing in the channel and crossing from the inside of the box, the probability of scoring goals can be higher.

In conclusion, having the fullback jump to press outside is effective in terms of keeping pressing and preventing them from breaking the midfield line but dangerous as a gap can appear in the back line.

It is obvious that having the outside player in the line of five move the wide area can hide some disadvantage of doing so in a 4-4-2. Even if the wide midfielder of a 4-5-1 drops back to press the opposition player in the wide area, there will be four player in the midfield line and they can close the gap to play through.

However, by reducing the number of players in the forward line, it is difficult to press the opposition centre backs or defensive midfielders. If they are not pressed and have time and space, they can play good balls in behind or at least dominate the game. Thus, there will be some occasions when one of the midfielders needs to join the pressing. However, it can increase the more risk than using a 4-4-2. 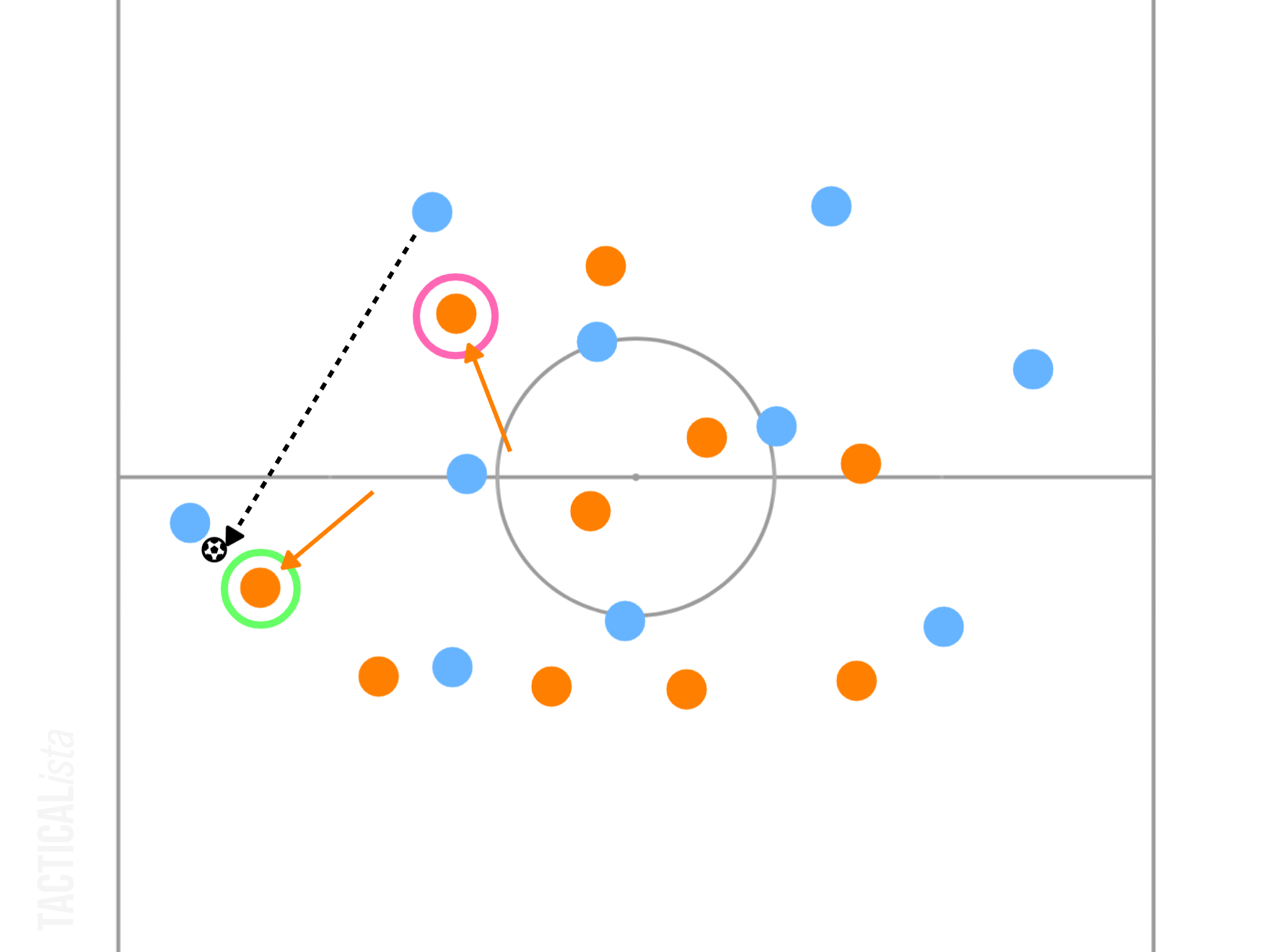 Another way to join the pressing up front is the wide player stepping up. This is similar to press with a 4-3-3 so it will be discussed later.

A 5-4-1 is so defensive system and there will be at least four defenders even if the wingback stepping up to press outside. This can hide the problem of being exploited the space in the channel. However, as similar to a 4-5-1, if wanting to apply pressure on the opposition centre backs or defensive midfielders, one of the midfielders needs to step up. In the case of a 5-4-1, wide midfielders tend to be attacking midfielder or wingers and they will press high more frequently than the defensive midfielders. 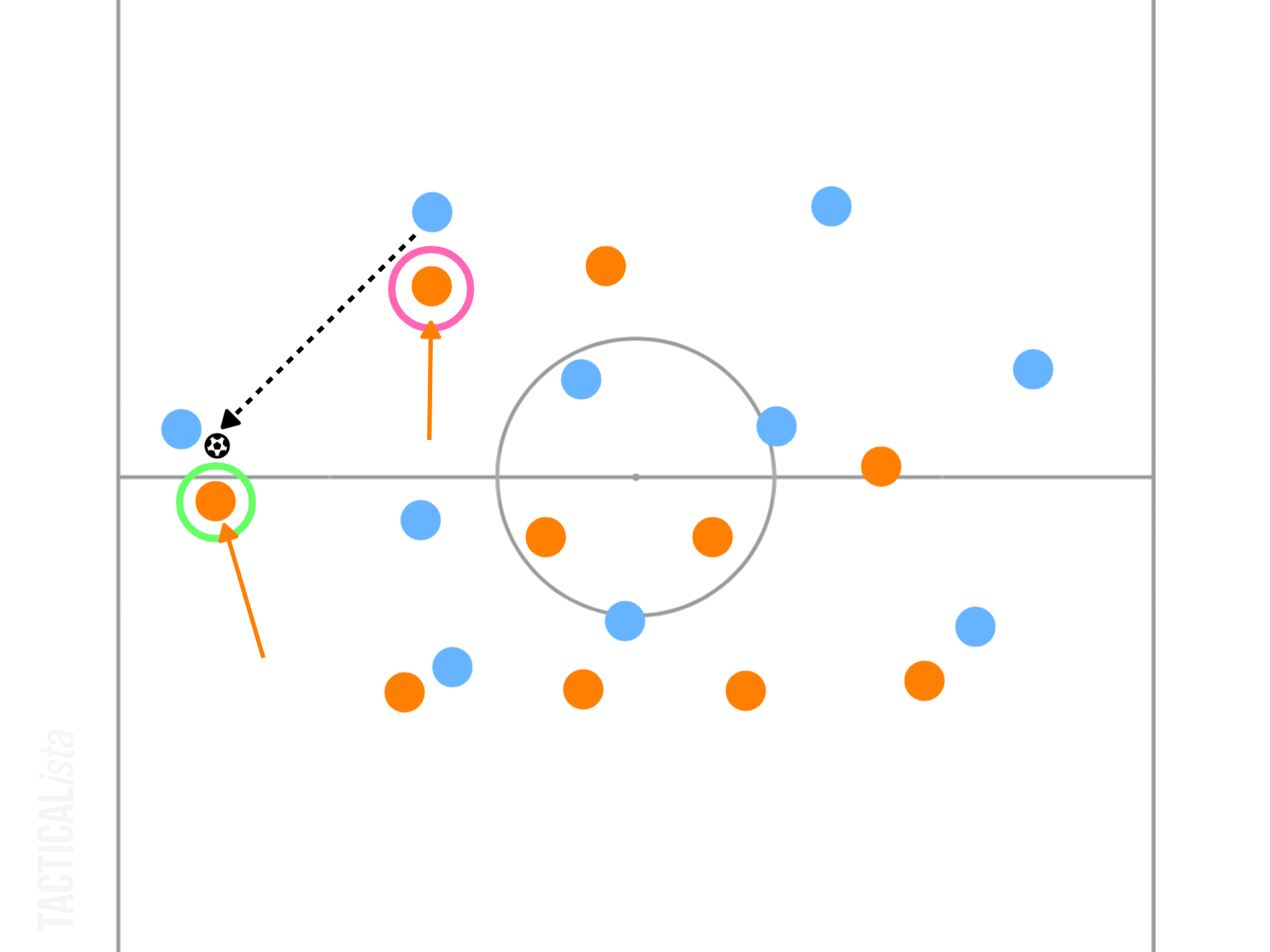 The first one is it is a 8 and not a pivot to cover the space between the wingback and him. Thus, as it was discussed before, the gap there can be covered easily by the 8 than the pivot in the 4-5-1.

Another difference is the direction of pressing. The opposition wide player is pressed by the 10 from his back in the 4-5-1, but it will be from his front by the wingback in the 5-4-1. The pressing direction is important because it dictates space and time for the opposition wide player. In this case, the wingback can press forward and close down the space in front of the opponent. Therefore, it is possible to prevent him progressing the ball by dribbling, so the back line can keep high and the team out of possession can press high.

A 5-3-2 is a famous system to defend deep while having a threat with two strikers. The vital characteristic of the midfield line of three is the space in wide areas. Obviously, it is harder to press outside by the outside player in the midfield line of three than those in the line of four or five. Therefore, in many cases, the wingback jumps to press the opposition wide player. 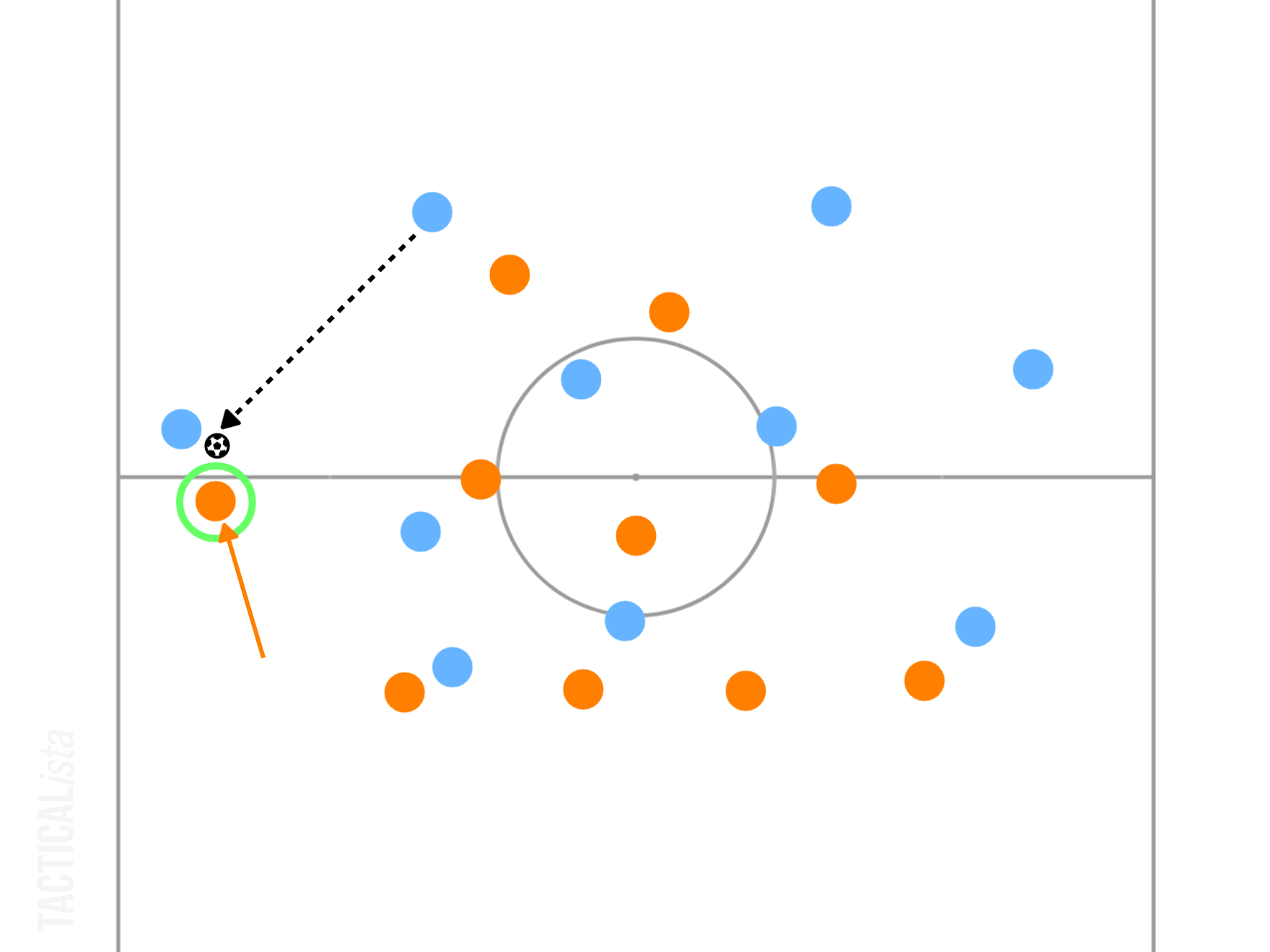 This looks like the situation where the wide midfielder presses high and wingback steps up in the 5-4-1. However, the difference is necessity of shuffling over. In the 5-4-1, in order to close the gap to play through the middle, the other three midfielder need to come across to the ball side. However, in this 5-3-2, the three midfielders can stay in the middle so the gap can be made less frequently than the 5-4-1. The important thing is the gap is made when all players in the line cannot move same distance with same pace. Therefore, if players don’t need to move, the gap cannot be made or stretched. Thus, a 5-3-2 is more superior to a 5-4-1 in terms of the necessity of shuffling across.

This system is often used by Liverpool or Manchester City to press high and it has some risks but is one of the best ways to lock the opposition team in a small area. Then, of course, after forcing them to play wide, who goes to press is very important.

The best way is the fullback jumping to press the opposition wide player. 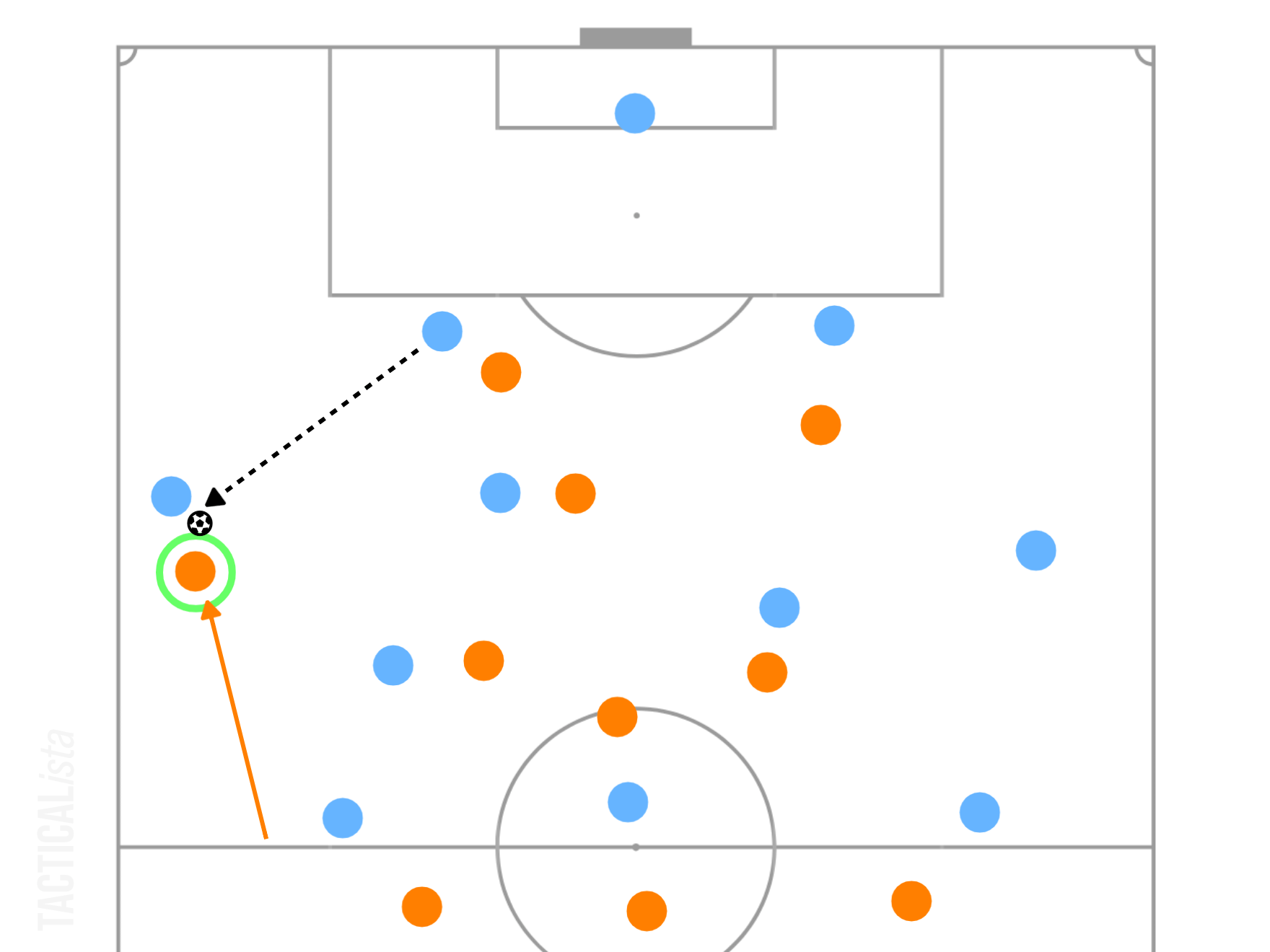 As the importance of the direction of pressing was discussed before, if the fullback can close the opponent down and prevent him progressing the ball playing long, the pressing is almost successful. There are a lot of players in the middle lane, so it is impossible to switch the ball with short passes. Consequently, the opposition player on the ball will force to play rough long balls. However, if the fullback cannot close down the space between him and the opposition wide player, he can play precise long balls in behind and this is a huge risk. This is because there are only three defenders and they are shuffling over.

In this case, back four can deal with the long balls in their position but the ball will be more precise. Thus, it can be a problem when the opposition wide player can play accurate long balls and there are fast attackers. For example, Liverpool tries to keep the back line as high as possible to manage this long ball, but they were easily broken by Osimhen against Napoli recently. Therefore, it is a risk to have the player in the midfield three press the wide area horizontally when pressing high up the pitch.

In this article, who should press wide areas was discussed. There are mainly two ways, which are wide midfielders or fullbacks press outside, and both of them advantages and disadvantages. Additionally, there were many differences depending on systems. In terms of the differences, the direction of pressing, the distance or necessity of shuffling over were very important to consider. Thanks for reading.