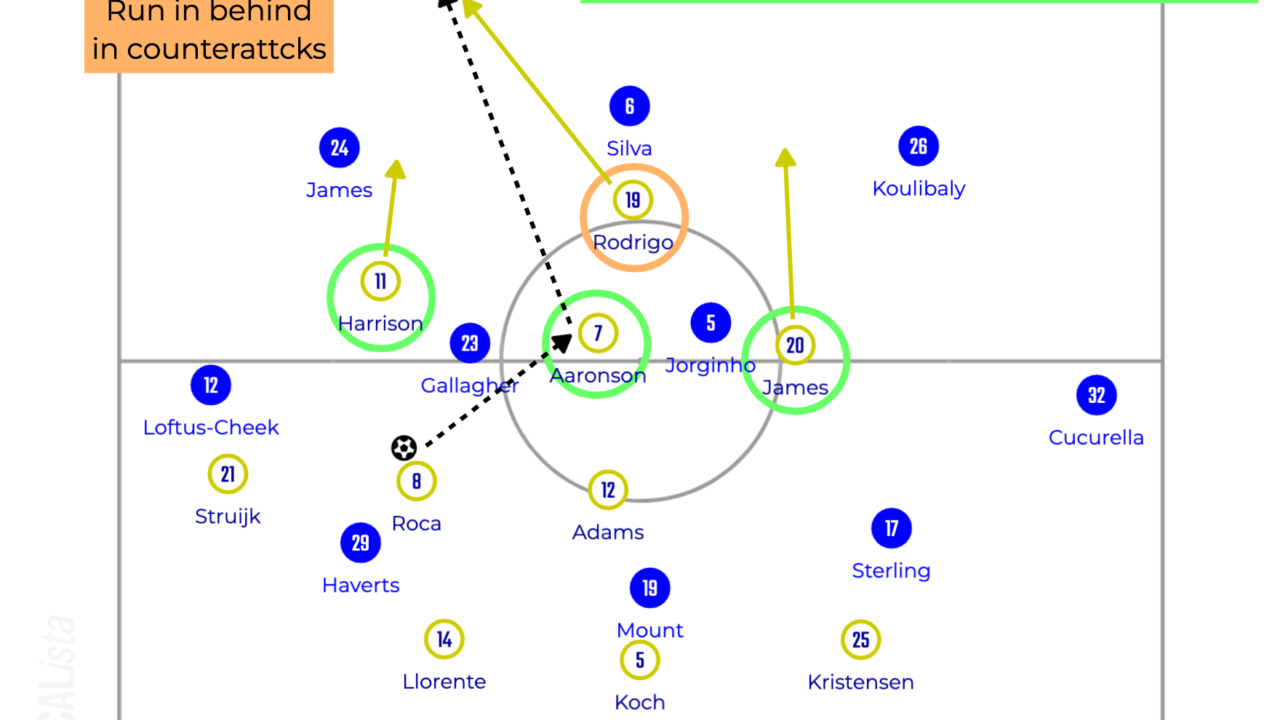 The most surprising game in Premier League this weekend was the match between Leeds United and Chelsea, which the home team destroyed the Blues by 3-0 at Elland Road. In this game, Leeds didn’t allow Chelsea to play from the back comfortably and the pressure was applied to even the goalkeeper Mendy who was tackled by Aaronson and gave the first goal. In this article, how Leeds caused troubles in Chelsea when playing from the back and the difference between high pressing and middle pressing are going to be discussed.

Firstly, the organisation of Leeds when pressing is going to be analysed. Interestingly, they made some changes based on the compactness of the team. 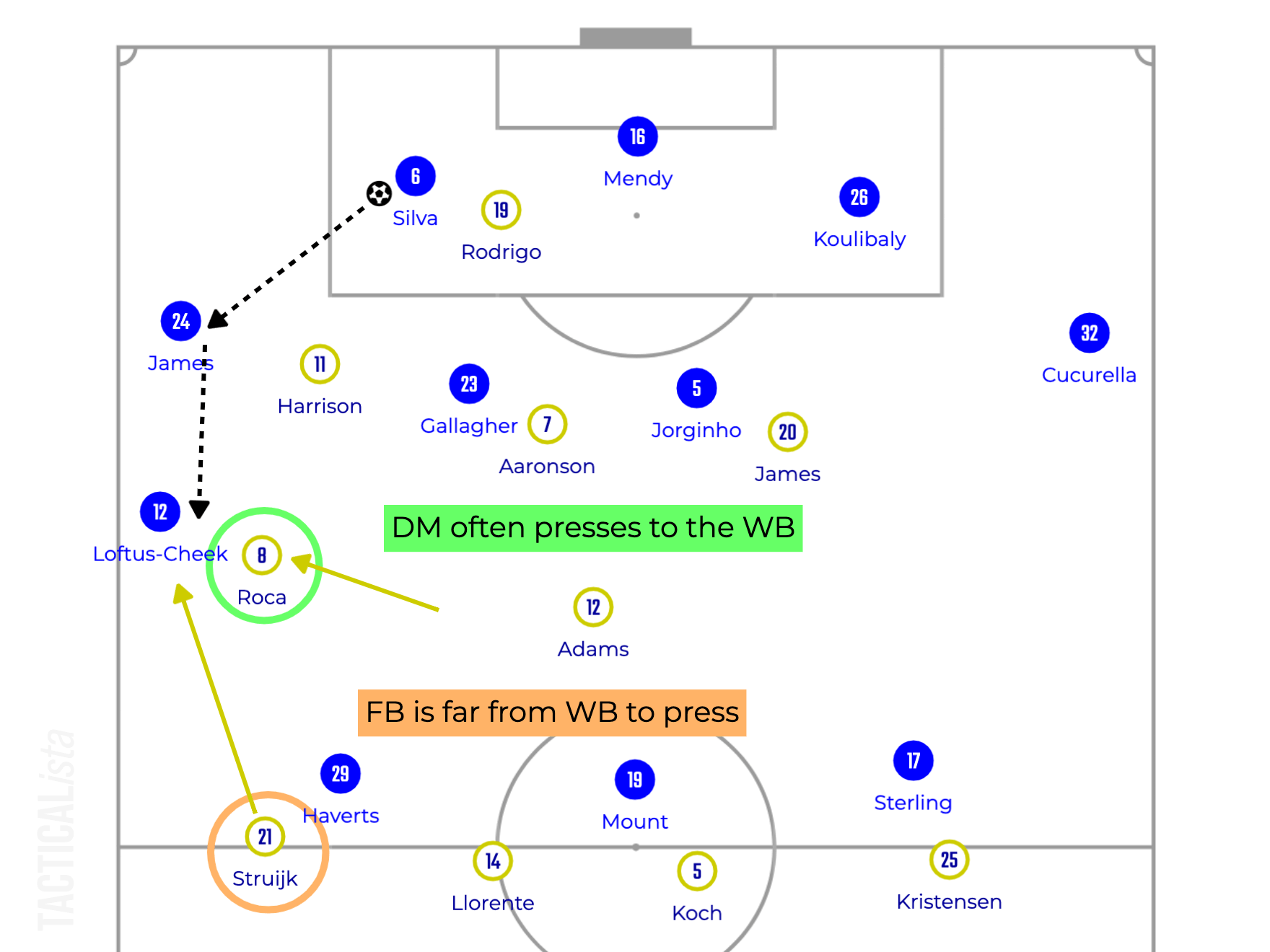 This is the example of high pressing against Chelsea playing out from Mendy or centre backs. Chelsea could’ve taken advantage of the position of wingbacks because they had three players in the flank while there were only a winger and fullback for Leeds. However, Marsch dealt with this situation by moving the defensive midfielder to the opposition wingback in order to keep applying pressure on the opposition player on the ball because the defensive midfielder was closer to the opposition wingback than the fullback.

However, the fullback sometimes stepped up to the opposition wingback depending on the situation. This pressing was seen when they were out of possession in the midfield. 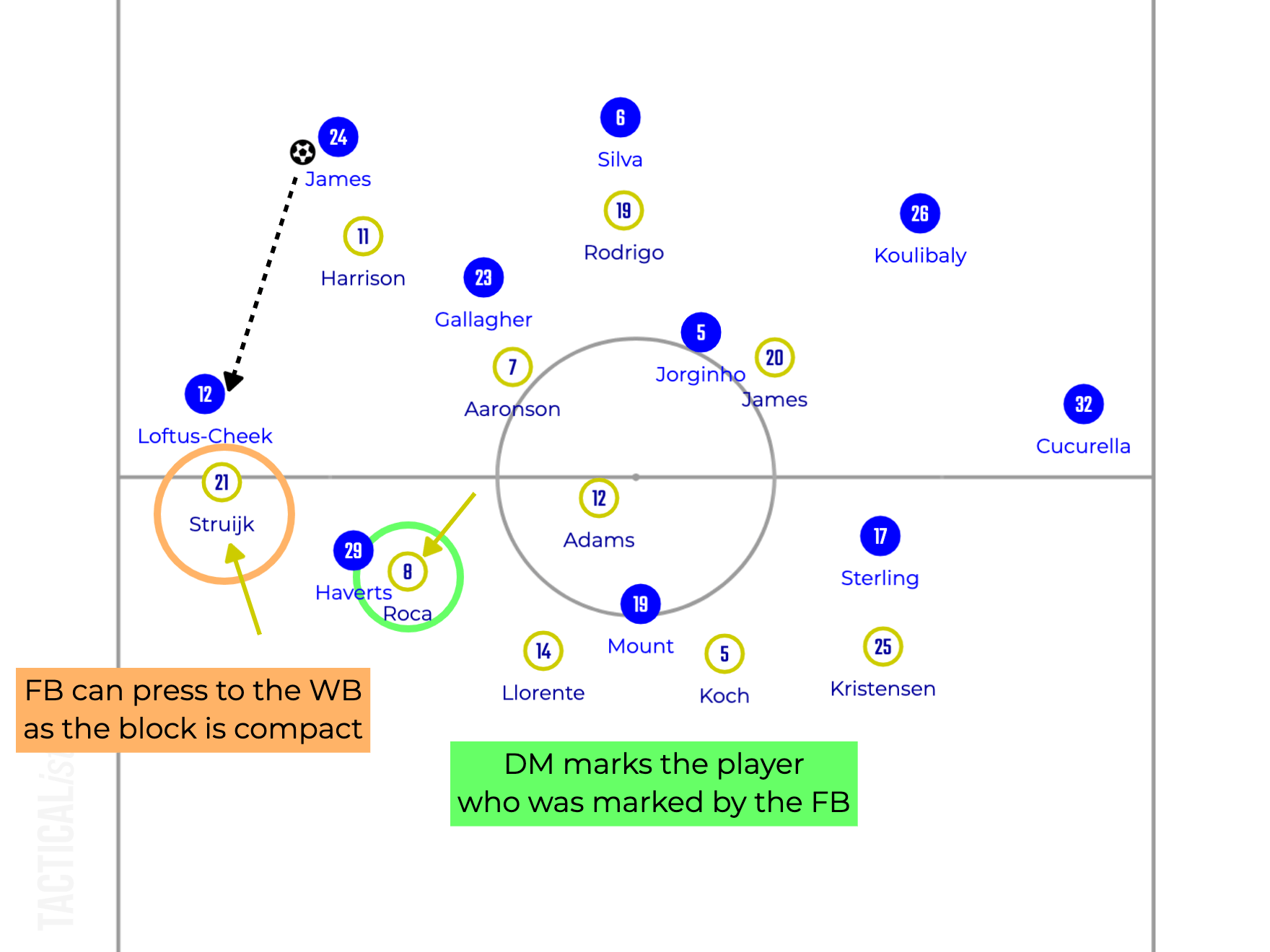 The difference between the high pressing and middle pressing is the vertical compactness of the block. When pressing in the opposition half, the defence line can’t push up beyond the halfway line due to the offside rule so the distance between the striker and the centre back becomes longer. On the other hand, the defensive block can remain compact in the midfield. This difference can influence the pressing organisation. Marsch wants his players to keep applying pressure on the player having the ball so the closest player to the opposition player on the ball should press him. Then, if the compactness of the block is different, the closest player to the specific opposition player can differ. Therefore, the player pressing to the opposition wingback was different in the opposition half and midfield. But I think the principle is that the closest player to the player on the ball must press to him and Marsch didn’t tell players these differences when pressing like “you need to press him here but you don’t do it there”.

The Compactness of Pressing

Another characteristic of Leeds’ pressing is the horizontal compactness of the second line. Leeds were playing in a 4-2-3-1 but the ‘3’ was so narrow that even the opposite side winger came to the central lane. This was very important for them not only pressing but also playing in counterattacks.

You can find out how Leeds’ players pressed in two illustrations in the previous chapter. The opposite side winger often left the centre back and mark the defensive midfielder. This helped Leeds to lock Chelsea in one side because both defensive midfielders were marked by the 10 and opposite side winger respectively so it was almost impossible to switch the ball via these midfielders. Then, the benefit of this horizontal compactness of ‘3’ after they regained the ball is going to be focused in this chapter. 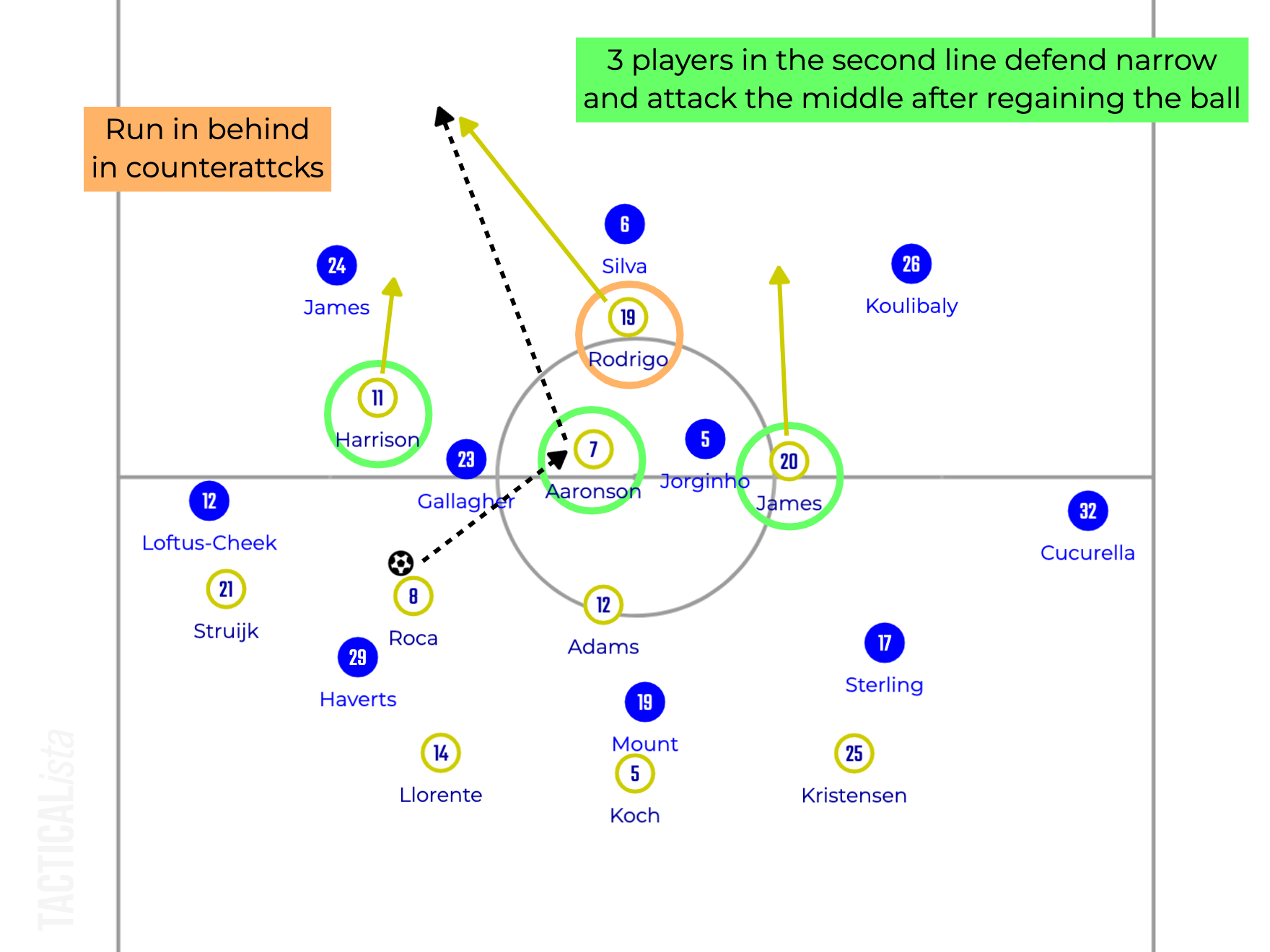 The basic of counterattacks is playing forward as quick as possible to create huge chances before the opposition players back in. Therefore, playing into the wide area should be avoided because it takes time to attack. Thus, it is crucial to play forward with the minimal width and the narrowness of three players is the key.

As soon as regaining the ball, Aaronson often received the first pass and Rodrigo made a diagonal run in behind. This created a gap between defenders of Chelsea and both wingers tried to run and progress the ball forward to conclude a counterattack quicker. Thanks to the narrowness of these attackers, they could break the line by one-two or quick combination. Thus, it is possible to say that the horizontal compactness of three players in the second line is beneficial not only for pressing but also counterattacks.

Against Leeds’ pressing, Tuchel made some changes in the second half. 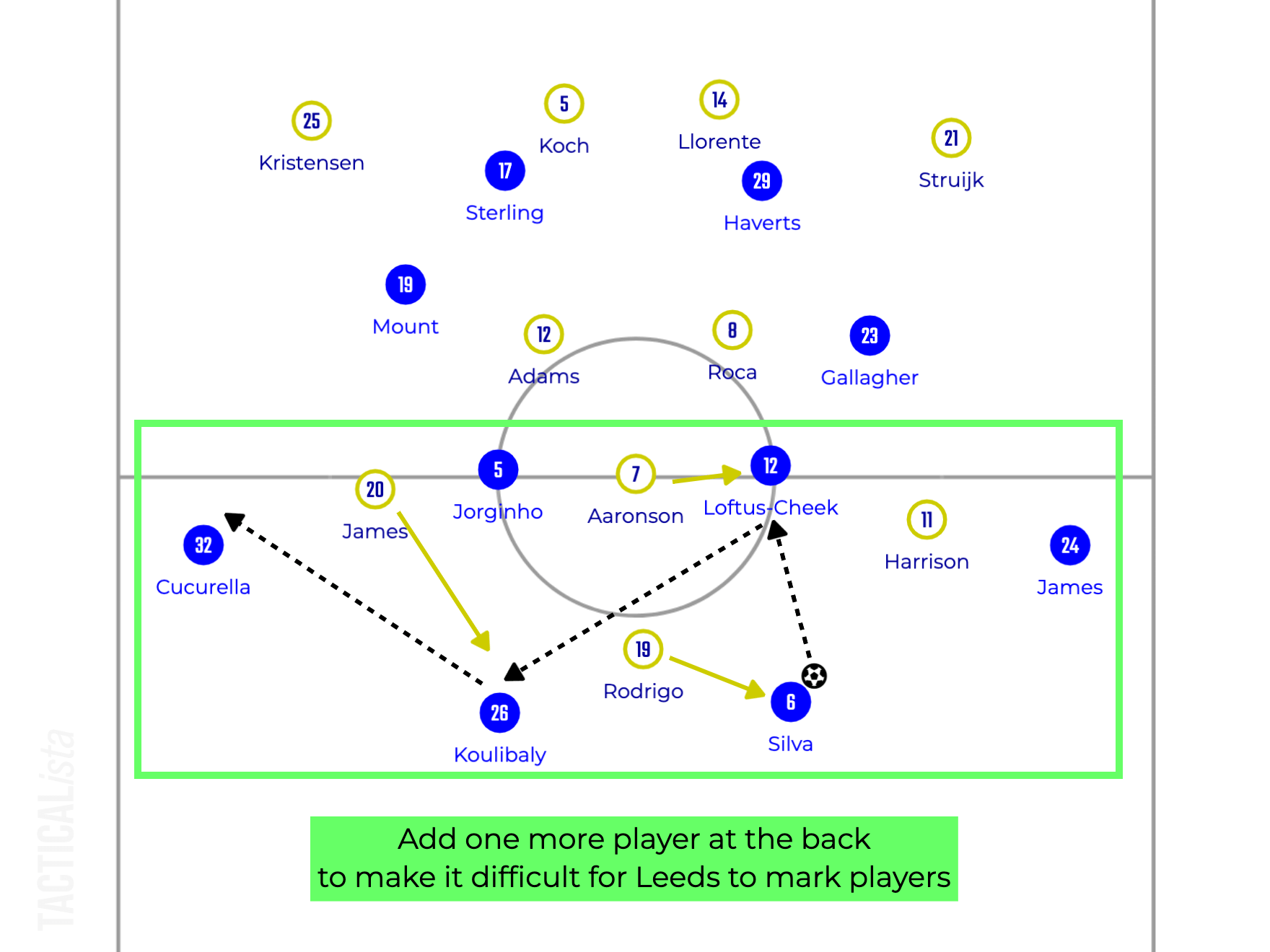 He moved Loftus-Cheek from the right flank to the middle of the pitch and changed the system into a 4-2-2-2 which functioned well against Spurs. The aim of this is increasing the number of players at the back from five to six and making it easy to play through the pressing. By this change, it became little bit difficult for the second line of Leeds to mark midfield players but it was not enough to turn things around.

Overall, Leeds were excellent at pressing and completely dominated the game. I’m looking forward to seeing Leeds play against Manchester City or Spurs. Thanks for reading.