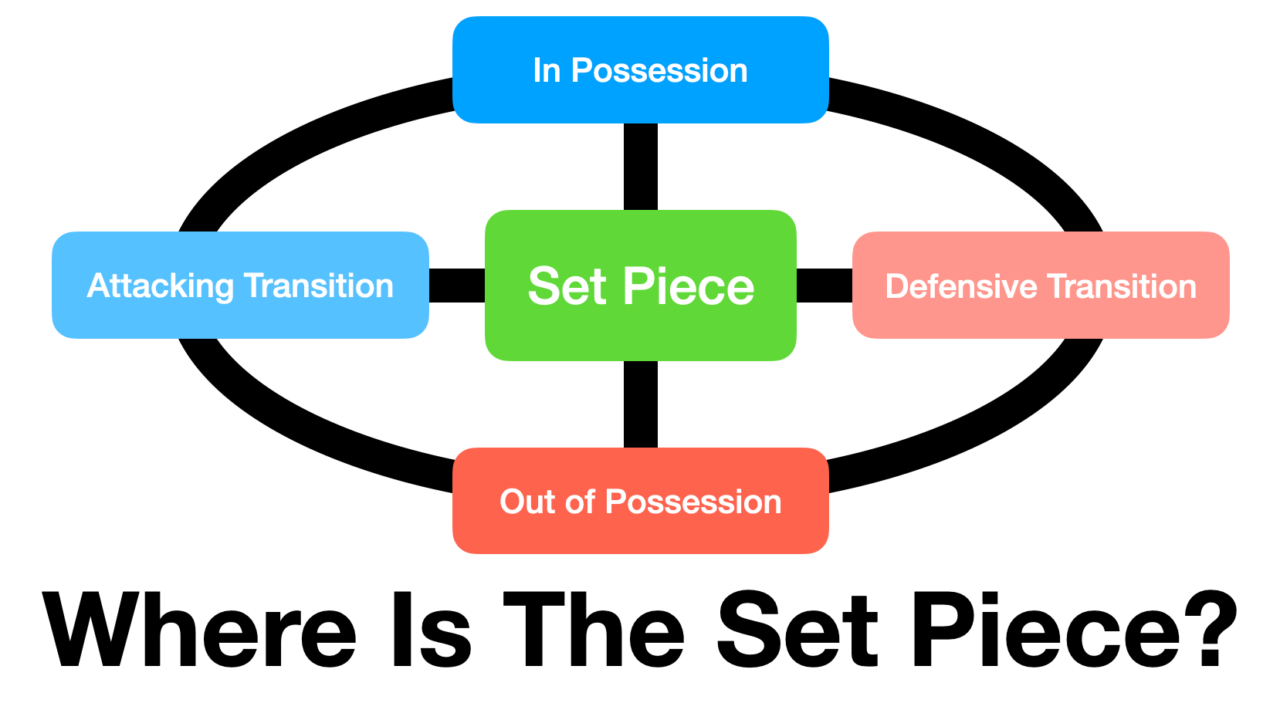 In this article, the characteristic of set pieces is going to be discussed within the phases of the game. It becomes popular to analyse football games based on four phases which are attacking, defending, attacking and defensive transition. Of course, the number of phases can be two with in possession and out of possession or six with splitting attacking into build up and finishing and defending into pressing and protecting the goal. However, no matter how many phases there are, the importance of transition between each phase is largely recognised. On the other hand, the presence of set pieces is often ignored or treated roughly. Therefore, the aim of this article is to analyse the transition between set pieces and open play and try to find out the reason why transitions between them needs to be considered more.

Where Does The Set Piece Exist in A Game?

What Happens in The Transition between Set Pieces and Open Play?

The biggest difference between set pieces and open play is the position of players. In set pieces, players play different roles. For example, in free kicks in final third or corner kicks, tall and strong defenders position themselves in the box and play as main attackers. Additionally, even in throw-ins, many players gather around the ball side, which hardly happens in open play.

This makes the transition between set pieces and open play more important. For example, in corner kicks, if the ball is cleared by a defender and the play still continues, both teams need to keep playing while reorganising the position. In some research, it is suggested that counterattacks from defending corner kicks can end with shots more than those from open play. This is because the attacking team’s strongest defenders are in the opposition box and cannot defend counterattacks.

Therefore, it is possible to say that the transition after set pieces is completely different from those from open play.

Characteristic of Each Set Piece

In this chapter, the characteristic of each set piece is going to be discussed. The more detail about each set piece will be featured on upcoming articles.

Throw-ins are the most frequent set piece in football. When talking about throw-ins as a set piece, often only long throw-ins in final third are recognised as a set piece. However, if you fail to throw the ball in before opposition players mark the teammates, it is going to be a set piece. First of all, most of all players come around the ball. Then, some players try to receive the ball by changing each position in a small area or the player having the ball throws it just forward. Additionally, it is difficult to control the ball in such a congested space, so the ball is often played long. Therefore, the throw-in can be a chaotic situation. When planning throw-ins, how to manage the huge space in the opposite side needs to be considered. Main solutions can be to place a fullback or winger there and shuffle across quicker than the opponent after the ball played to the opposite area.

Free kicks and corner kicks have a similar feature so both of them are going to be discussed in this chapter. The common characteristic is defenders often position themselves in the box to be target players and some small attackers or midfielders excluded from the box. If the ball goes out of the pitch, there is no transition. However, if the ball is cleared by a defender or caught by a goal keeper, the transition occurs and which team secures the second ball decides attacking or defensive transition. If the attacking team regain the second ball, the defending team needs to reorganise the position to prepare for another cross. On the other hand, if the defending team win the second ball, the attacking team needs to manage the counterattack with a few players waiting on the halfway line. This can be a crucial moment for both team because failing to adapt the next phase of set pieces can lead to concede a goal. Therefore, not only main target players but also players outside of the box need to be considered to manage transition after free kicks or corner kicks.

Recently, field players can receive the ball inside of the box directly from a goal kick and it enables a lot of teams to play from the back more tactically. For example, if the attacking team can use the goal keeper as one of the field players, it is possible to have a numerical advantage. Additionally, by restarting a goal kick slowly to take time enough for both teams to organise the position, the ball can be played through the route which is planned based on the opposition pressing. This enables the attacking team to play from the back safely. Therefore, it is worth considering goal kicks as a set piece and it should be practiced well.

Kick-off is not a frequent set piece but can create a goal scoring opportunity. The reason is that the defending players need to face the opponents running towards them which makes it difficult to mark them. Additionally, it is also hard to maintain compactness because attackers want to press but defenders cannot push the line up due to manage opposition attackers sprinting forward. Therefore, the attacking team can break the opposition final line by keeping a few passes to deal with the opposition pressing and to take time for the attacker to arrive the space in behind and playing to the attacker running in behind the opposition final line. This is only one of the examples and it can be explored in the future.

In this article, the presence of set pieces in a game was analysed. The transition between set pieces and open play and different positioning are main things when considering about set pieces. Additionally, the characteristic of each set pieces was discussed and the detail of them will be analysed later. Thank you for reading.