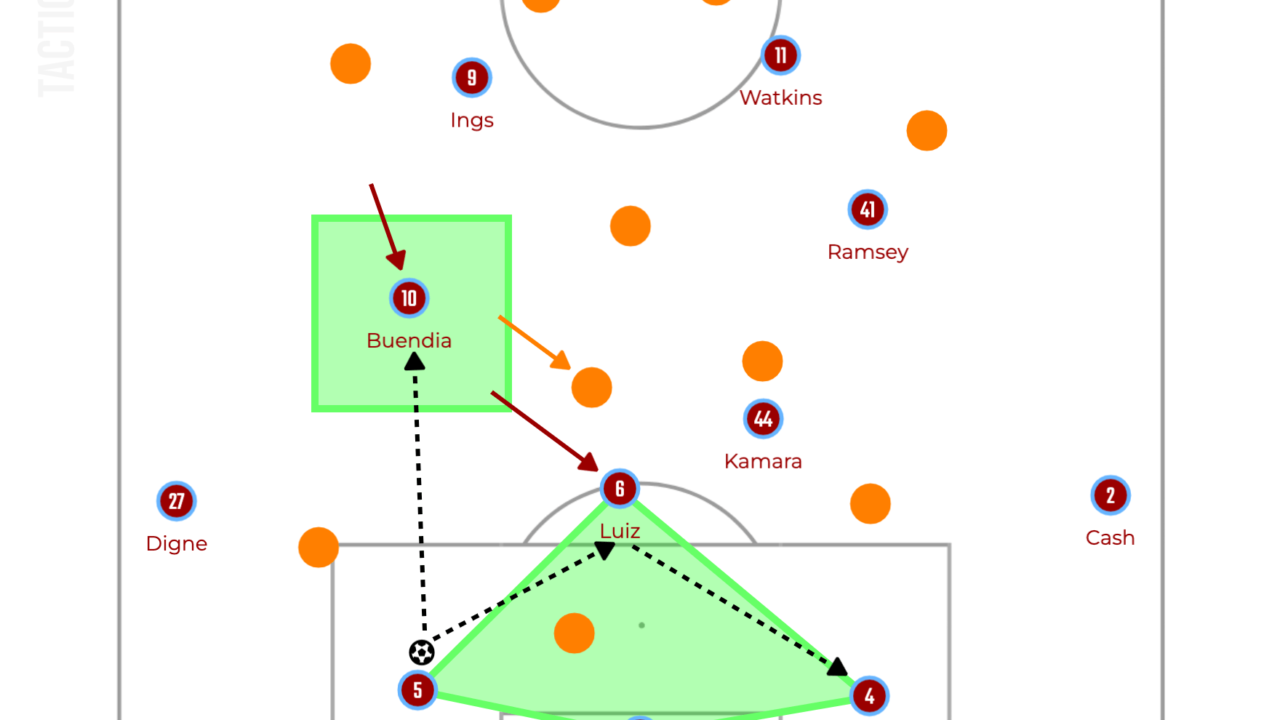 In this article, the tactics of Aston Villa, who appointed Unai Emery as a new manager, are going to be analysed. They have played only three games including two games against Manchester United after the Spaniard took over the team, but the basic idea of Emery was already found on the pitch. In possession, they try to play short passes to drag the opponents out and exploit the space in behind them quickly with four attackers. Then, out of possession, the back line is set extremely high to press aggressively and force the opponent to play long roughly. Sometimes their defensive line is described as ‘six back’, but it is not because a defensive reason but an aggressive reason. Overall, new Aston Villa attack with maximising the depth of the pitch and defend with minimising the depth of the pitch. Let’s get started with analysing their build up tactics.

The purpose of build up play for Aston Villa or Unai Emery is not keeping the possession but pulling the opposition players out by inviting high pressure. Therefore, how to use the space vacated by the opponents who are dragged out is the most important factor in this phase.

First of all, the system of build up is shown in the illustration below. 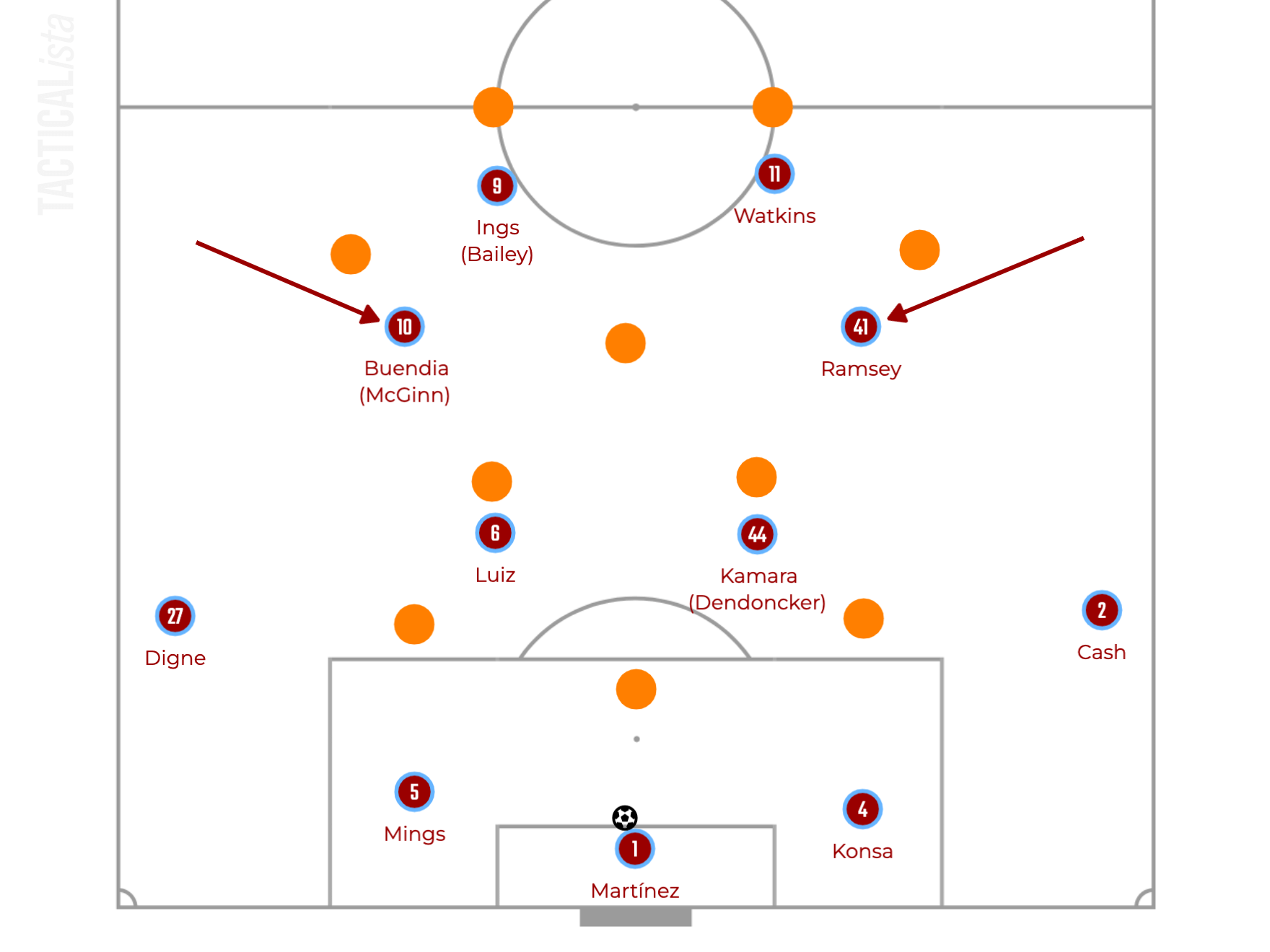 The original system is usually a 4-4-2 but it does not look an ordinary 4-4-2. When playing out from the back, both wide midfielders are positioned within the width of the box. They are the key players because the objective of playing out from the back is creating a space to play to attackers up front and the wide midfielders are the main players to receive the split passes.

Before analysing the movement of attackers, how to keep the possession under the opposition pressure at the back is discussed.

Both centre backs positioned themselves deeply next to the goalkeeper to drag the opposition attackers out. Additionally, one of the defensive midfielders drops towards the D and creates a diamond shape at the back. Douglas Luiz mainly does this job but Boubacar Kamara or Leander Dendoncker can also manage this role.

There are two reasons of creating this diamond shape. 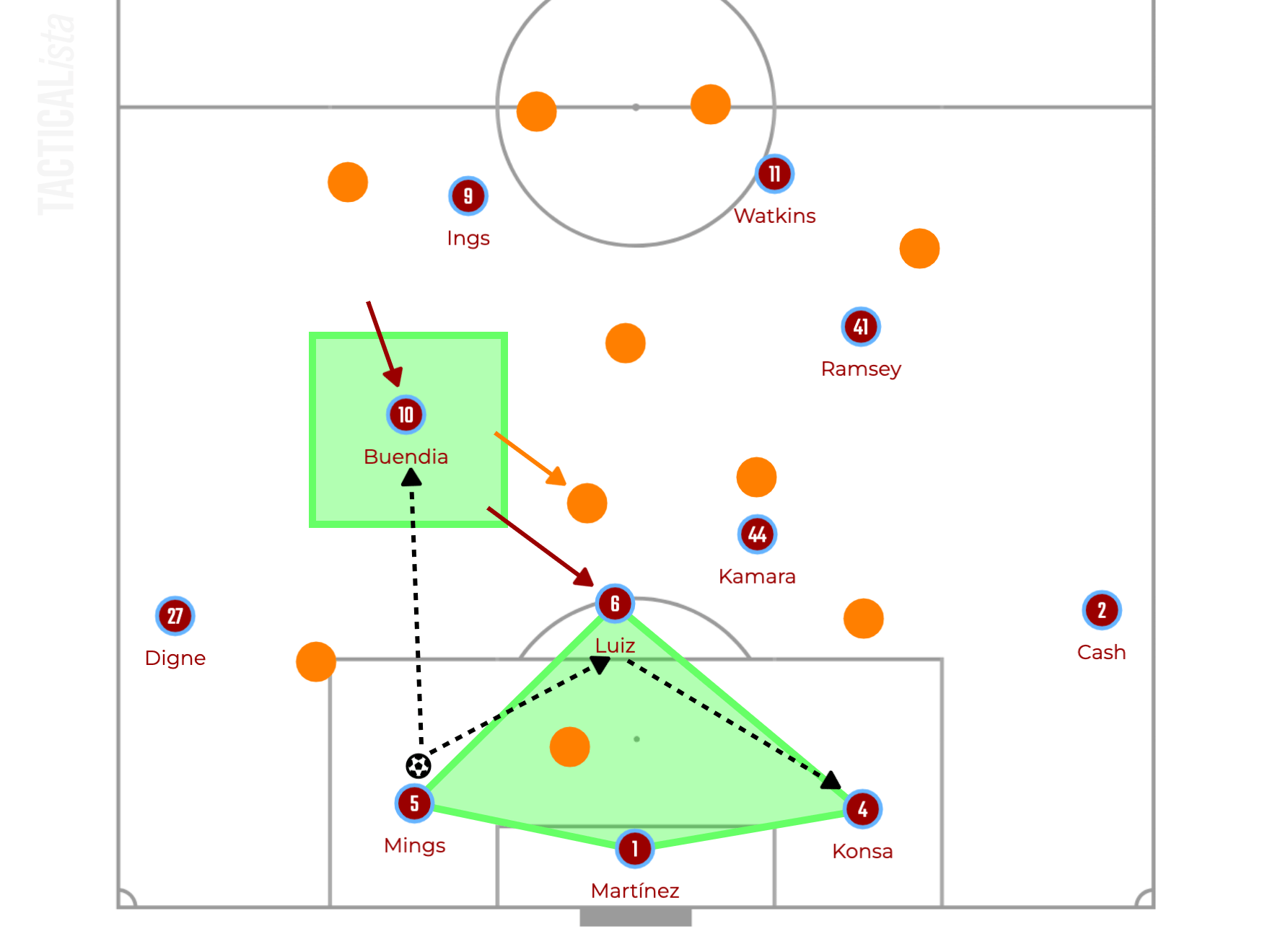 The second reason is more important. If the defensive midfielder dropping back can drag his marker out of his position, there will be a space for the wide midfielder to receive the ball in between the lines. This is the trigger to change the tempo and play fast attacks which look like counterattacks with four attackers. Additionally, this is what Emery wants to create by playing out from the back.

Then, how four attackers can receive the ball in between lines and play fast attacks are going to be analysed.

Usually, two strikers pin the opposition centre backs and two wide midfielders position themselves in between lines within the width of the box. However, if Emi Buendía plays as one of the strikers, he is also positioned in between lines, which means a striker up front and three attackers in between lines. However, the common and interesting thing is the narrow position of wide players. Therefore, the tactical reason of this is going to be analysed.

Recently, it is popular that wingers give the maximum width to make the pitch big when building up. However, Emery’s approach is the opposite. The wide players come inside and there are no players where wingers originally are. This unique position of wide players can confuse the opposition fullbacks. 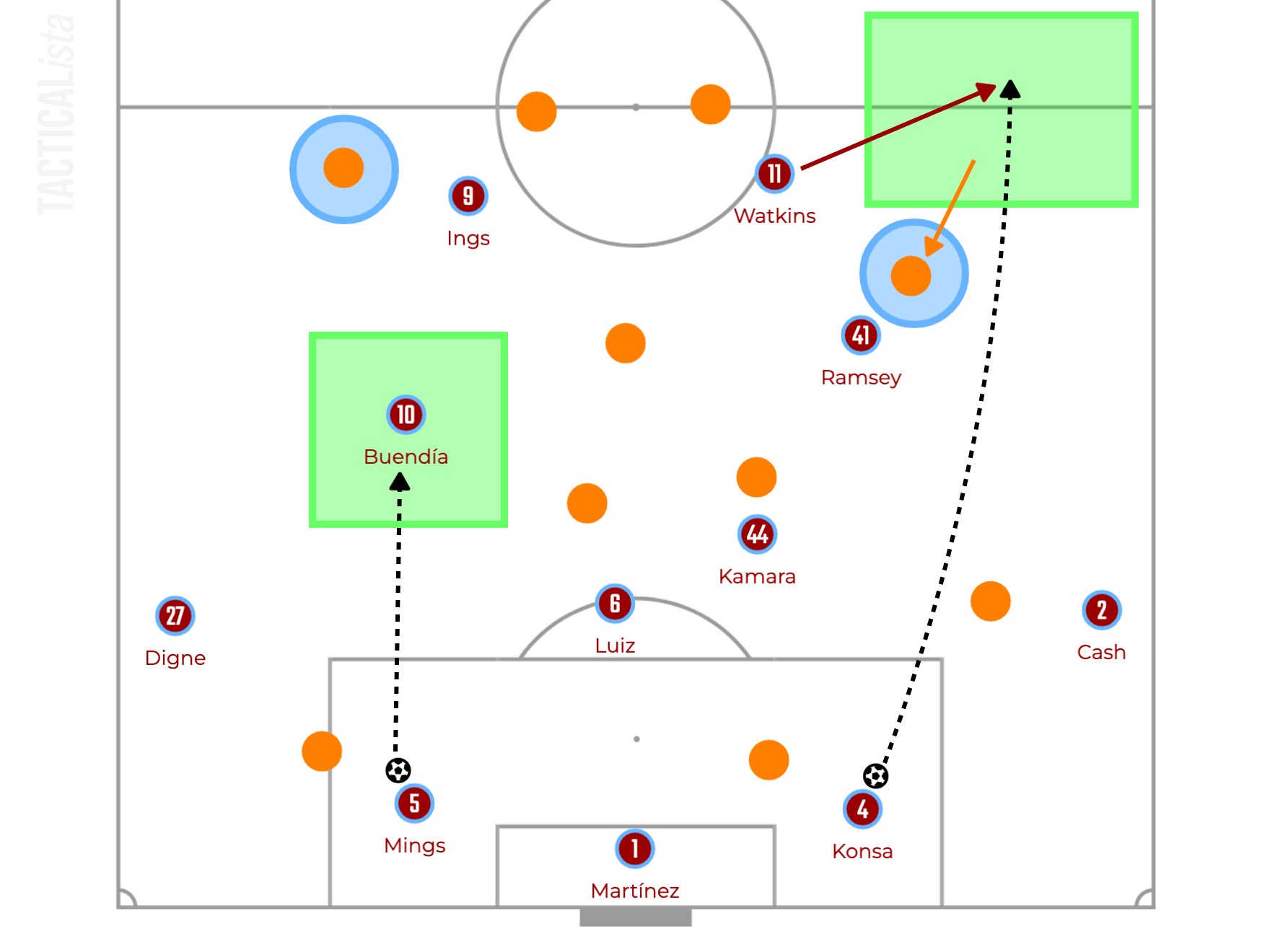 If the fullback keeps marking the wide player, he will vacate a space in behind. Actually, when the centre back on the ball is under the pressure, he plays long into the space and the striker drifts wide to use the space. However, if the fullback stays on the back line to cover the space in behind, the wide player in between the lines has time and space enough to receive the ball and turn. It is obvious that split passes on the ground is much more accurate than long balls in the air, so the latter one is the better situation for Villa.

In order to create better situations, when the wide player is about to receive the ball, the ball side striker drifts wide to pin the fullback. 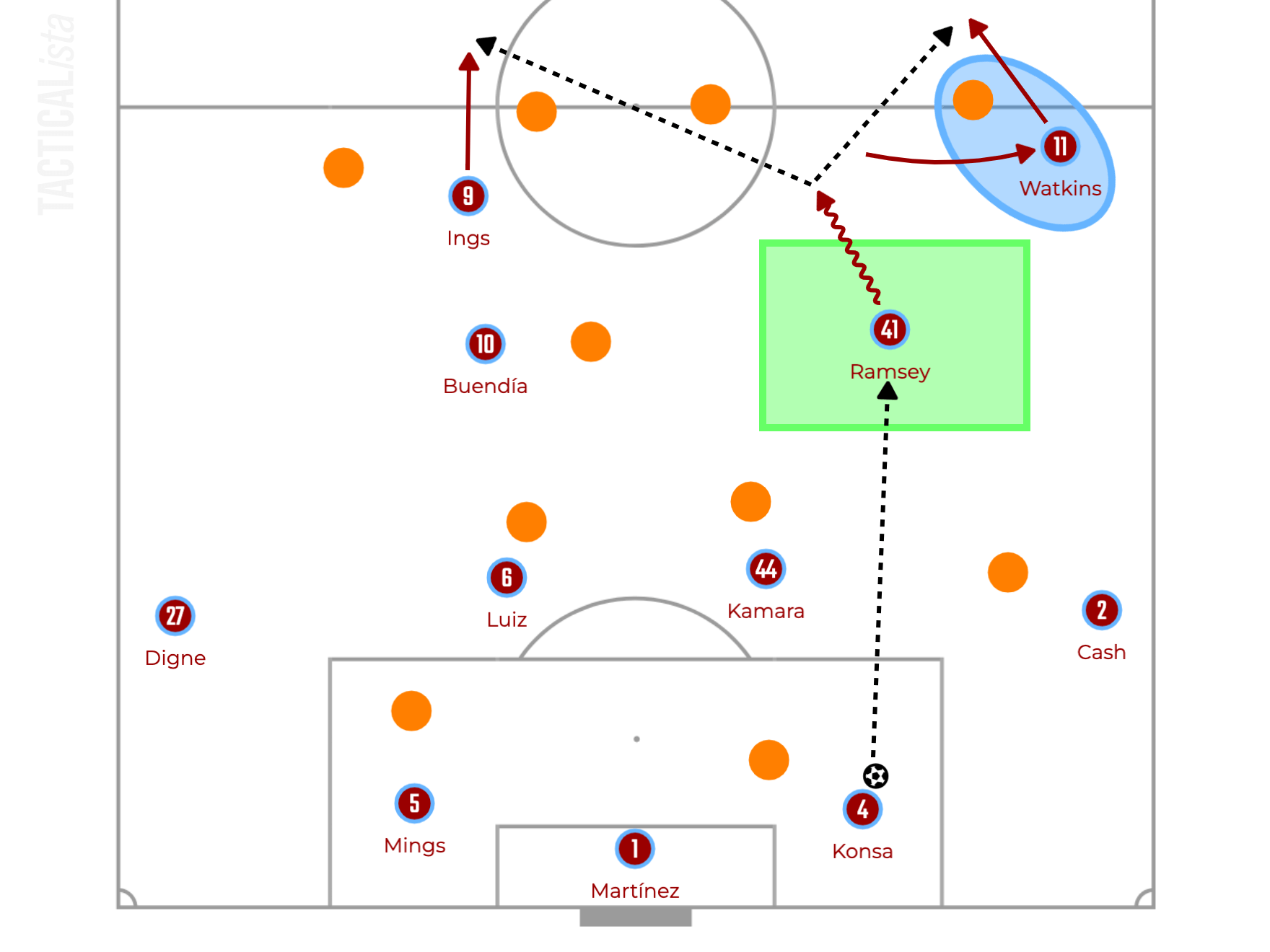 Another advantage of the narrow position of the wide players is the fullback can use the wide area where nobody is. 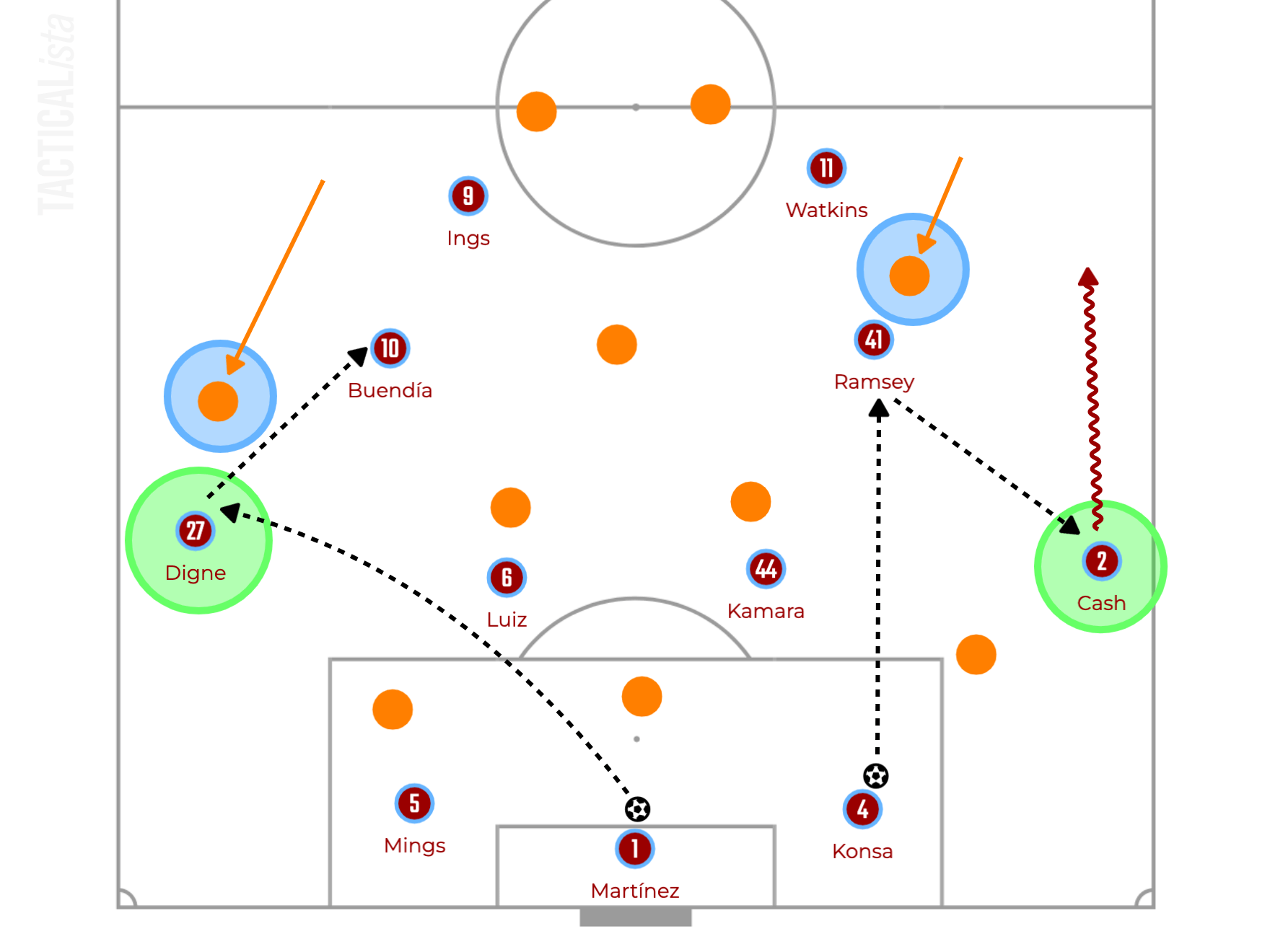 In short, thanks to the narrow position of wide players, the fullbacks can have a space to progress the ball forwards.

So far, the tactics of build up was discussed. In the next chapter, how to score goals after progressing the ball into the final third is going to be analysed.

As it was discussed in the previous chapters, Aston Villa’s main tactic is attacking quickly. They create fast attacks which look like counterattacks by inviting the opposition high pressure. Therefore, they can penetrate the box with a few numbers of players against a few number of defenders. This is more effective because each player can have more space in the box where even the space of the size of the ball can be crucial.

As it was mentioned above, the main way of progressing the ball into the final third is that one of the wide players or fullbacks carries the ball while the ball side striker drifts wide. After that, the player on the ball can deliver a cross or play outside to the striker and he crosses the ball. 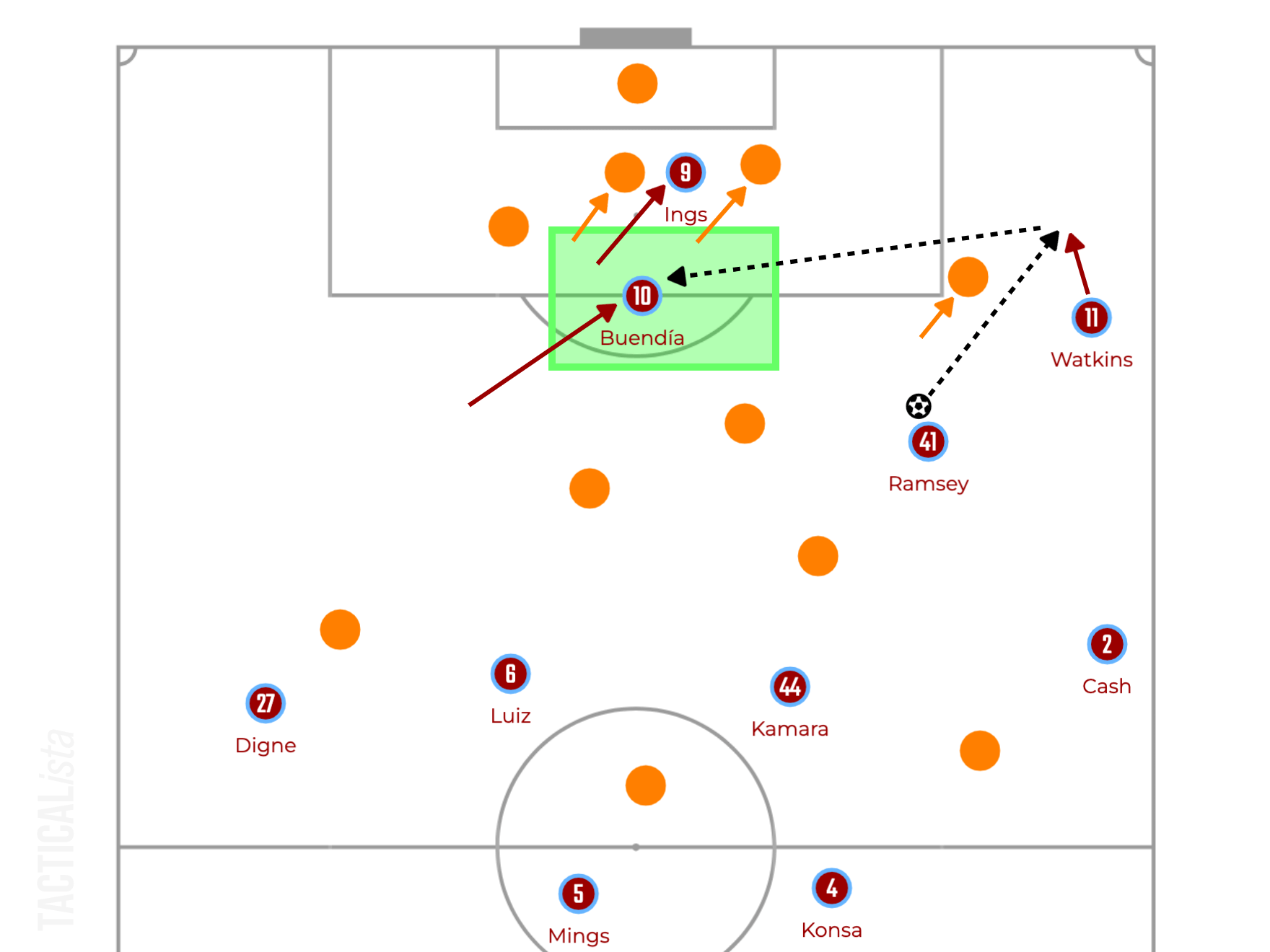 From building up to the attack in the final third, it is coherent and logical to be effective in possession.

The tactics of out of possession is also interesting to see. Emery’s team apply high pressure in the opposition half with super compact block. The width of the defensive block is narrow and the back line keeps a high line. This makes the pitch smaller for the opposition and forces them to play rough long balls in behind, which will be secured by the centre backs or goalkeeper. However, this pressing is still not perfect and has to be improved. Let’s begin analysing the tactics of pressing and examining the weakness of them. 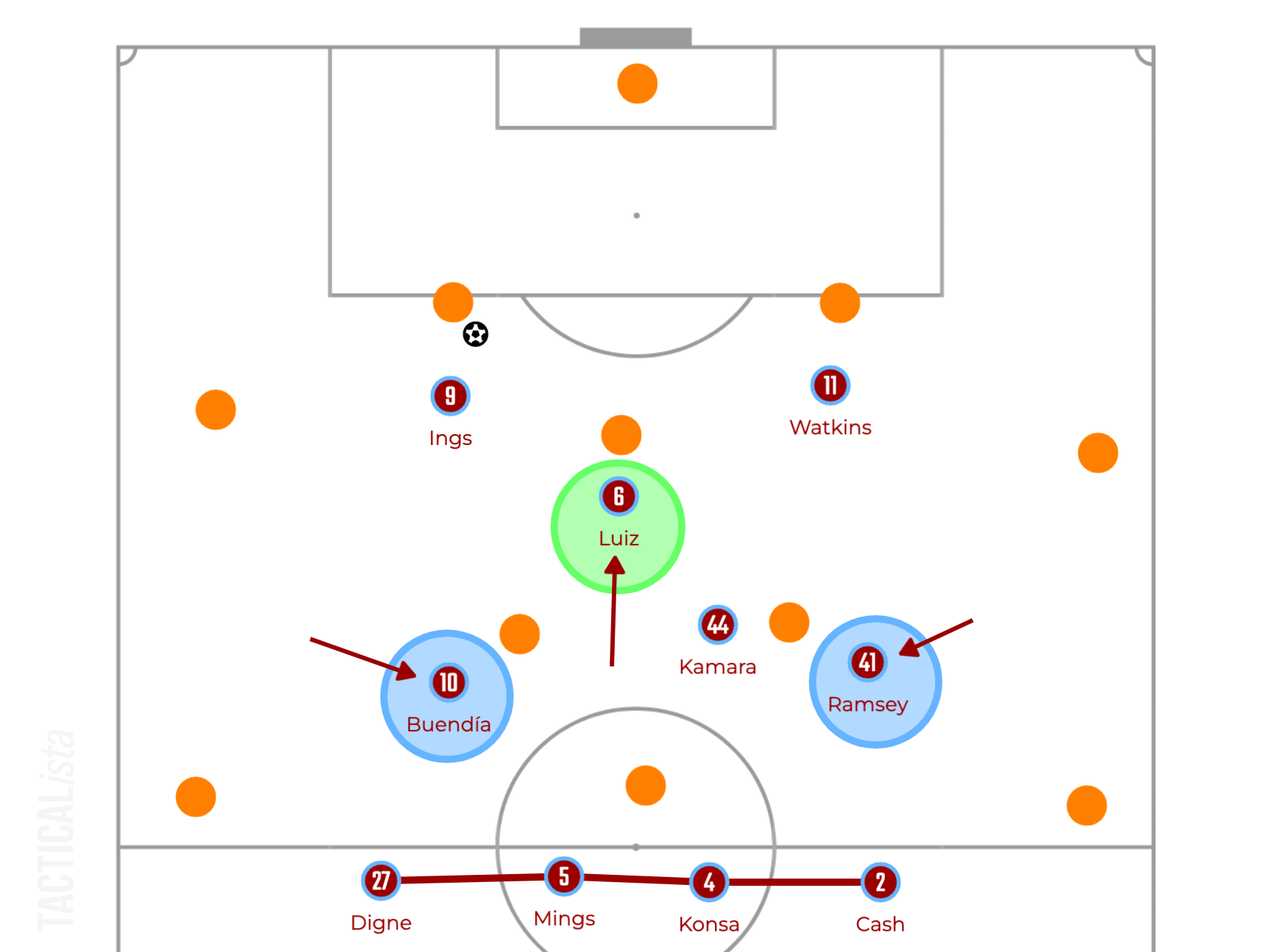 However, as the defensive midfielders step up to press, there will be a space in the middle in between the lines. Therefore, both wide midfielders need to tuck in and the back line stays high to close the space in between lines.

As everything has both strengths and weaknesses, this tactic is also not perfect and there is a solution to break lines. 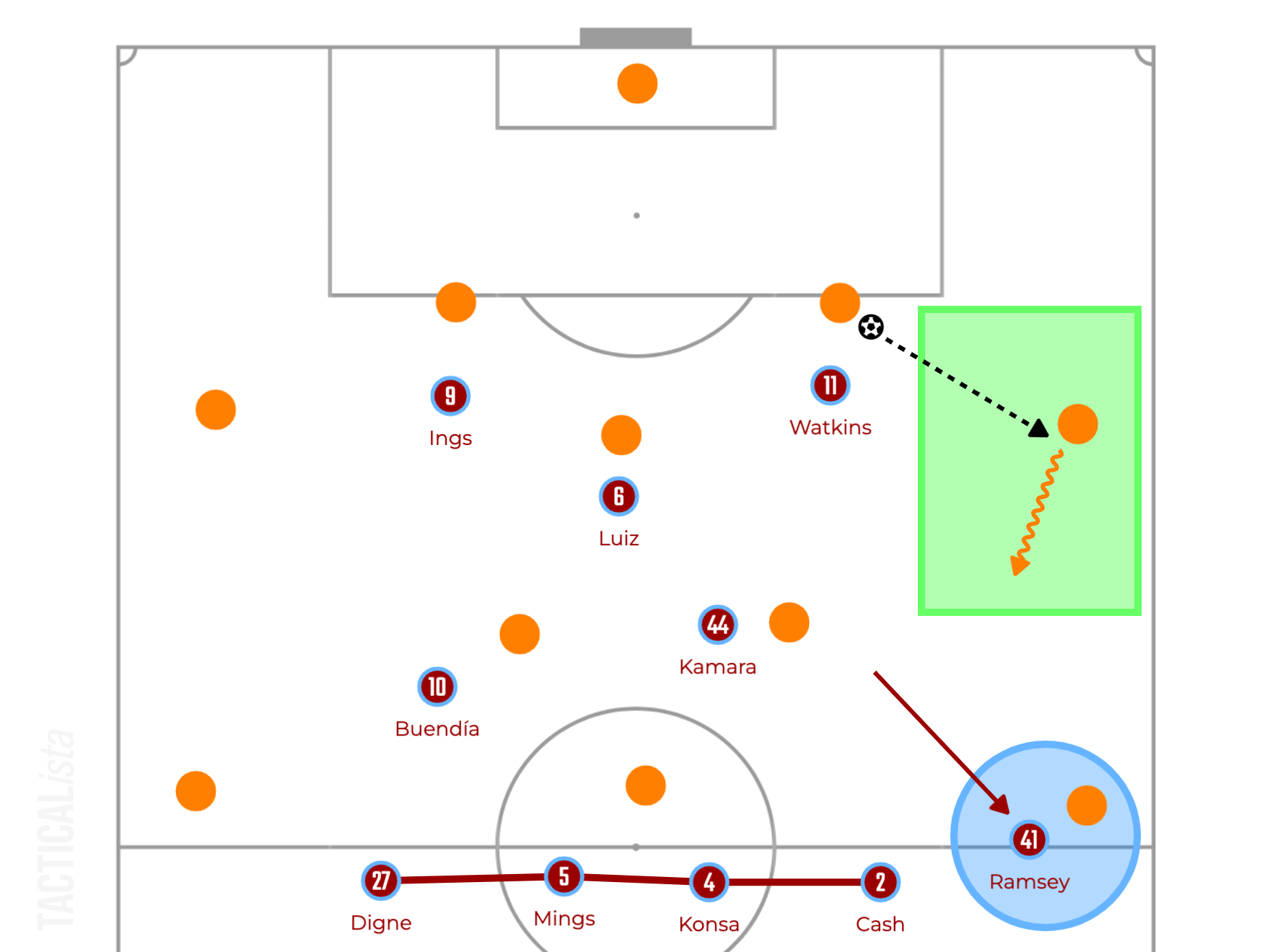 Actually, the wide player can sometimes successfully apply pressure on the opposition fullback and lock the opposition in a compact area, and this is what Emery wants. However, so far, the pressing often fails by being progressed the ball from the deep wide area. Therefore, the quality of pressing is the most interesting element to watch after the World Cup break.

Emery’s team, including his former club Villarreal, defends in the final third with many players at the back. However, this is not a defensive reason such as parking the bus in front of the goal. In the same way of pressing, the back line stays high and pushes up constantly. Thus, they try to reduce the available space and force the opposition team to play back. Consequently, sometimes the wide midfielders can be absorbed into the back line, which is described as a six back. 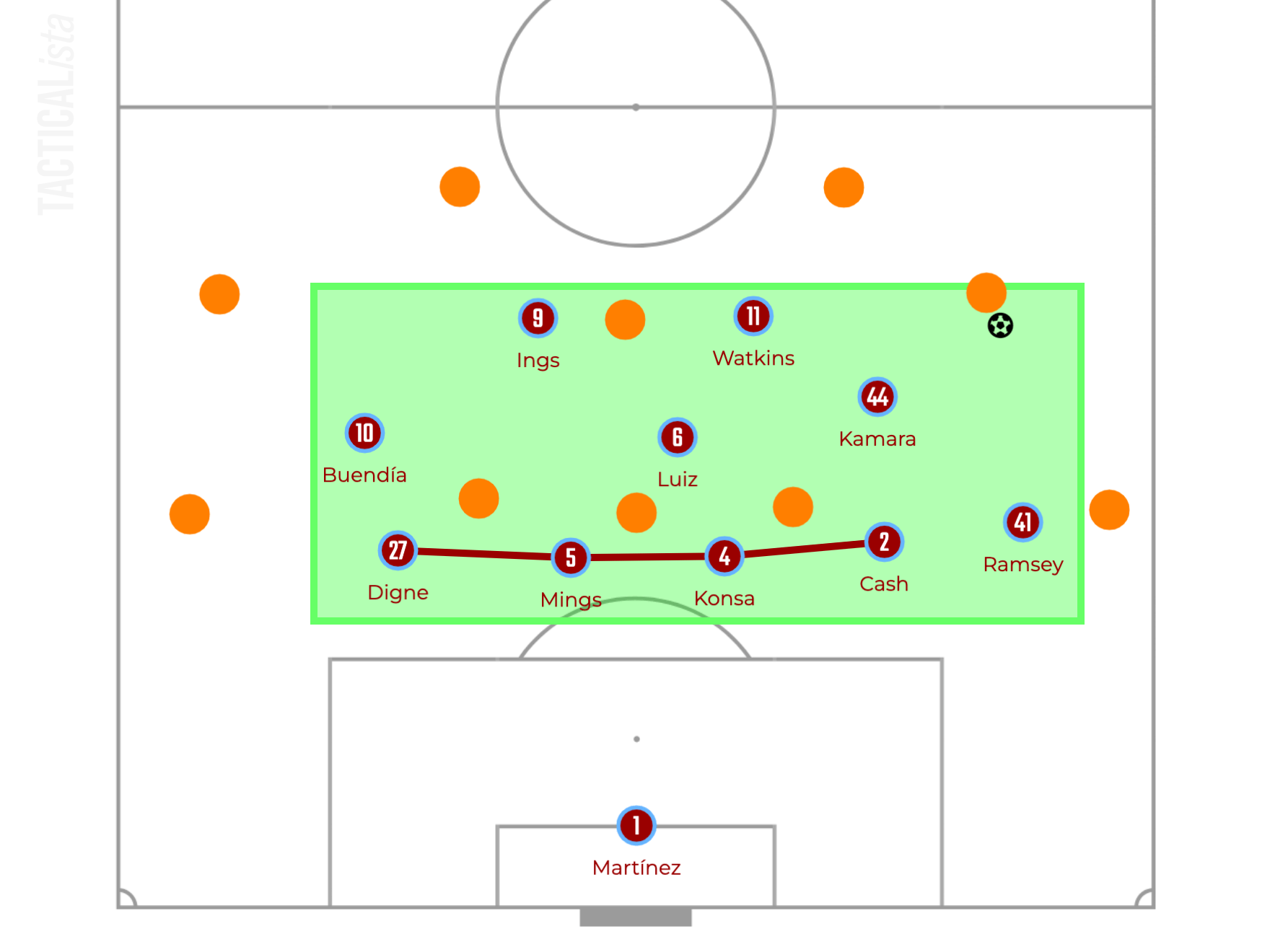 The fullback sometimes presses to the opposition wide player and in this case, the near defensive midfielder drops into the back line between the centre back and fullback to close the gap in the back line. 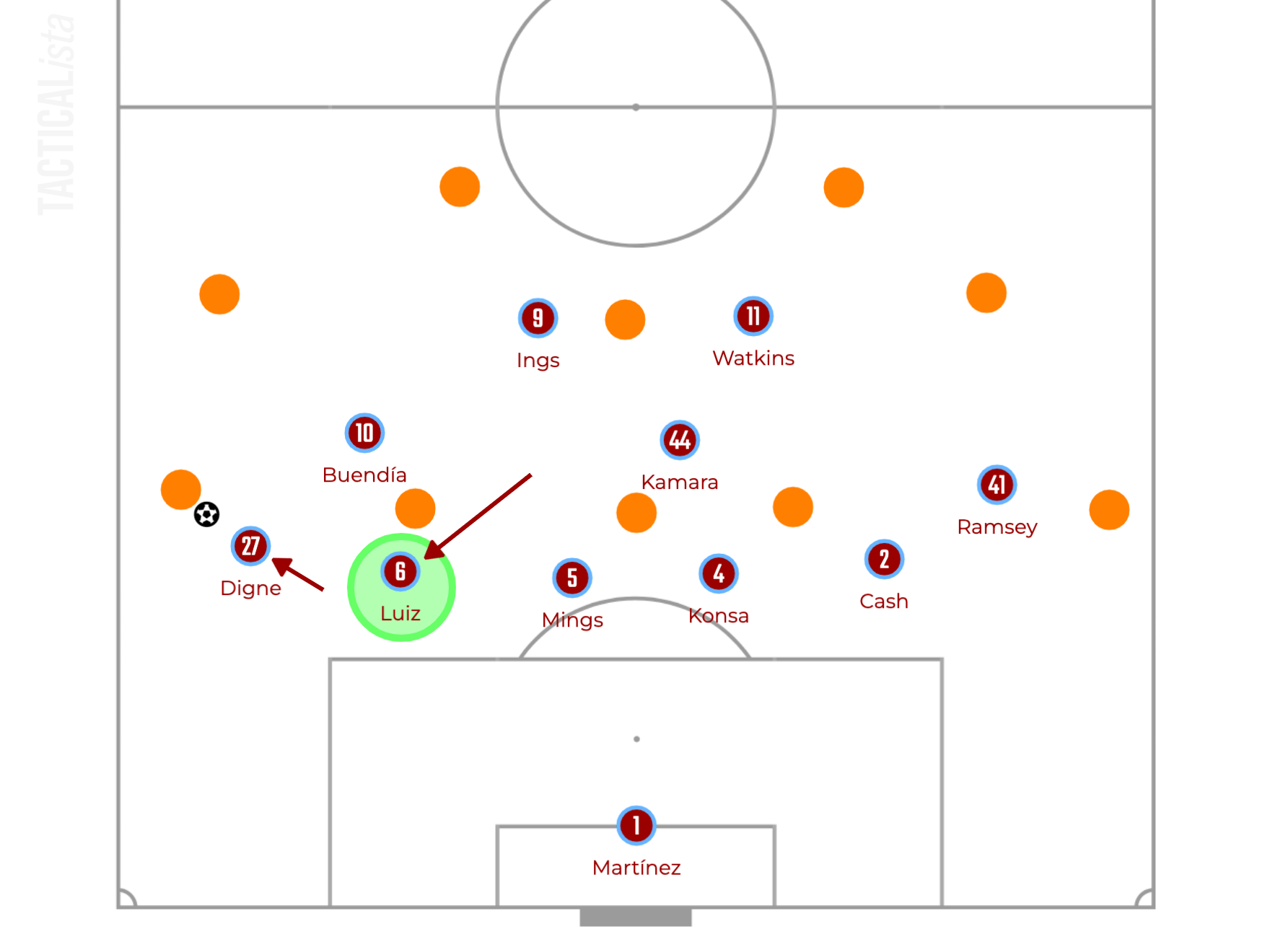 The reason of preventing the back line from shuffling across a lot would be letting them focus on vertical line control. It is so important for them to pushing the line up constantly, but it is difficult to do it with moving horizontally as well. Actually, when the fullback is dragged out, the centre backs does not drop back or shift across but remains high.

Overall, this tactic of defending in the final third is quite aggressive and taking a lot of risks of being exploited the space in behind. However, Emery wants to take initiative to dictate the opposition team even without the possession.

Thanks for reading the analysis of Aston Villa under Unai Emery.