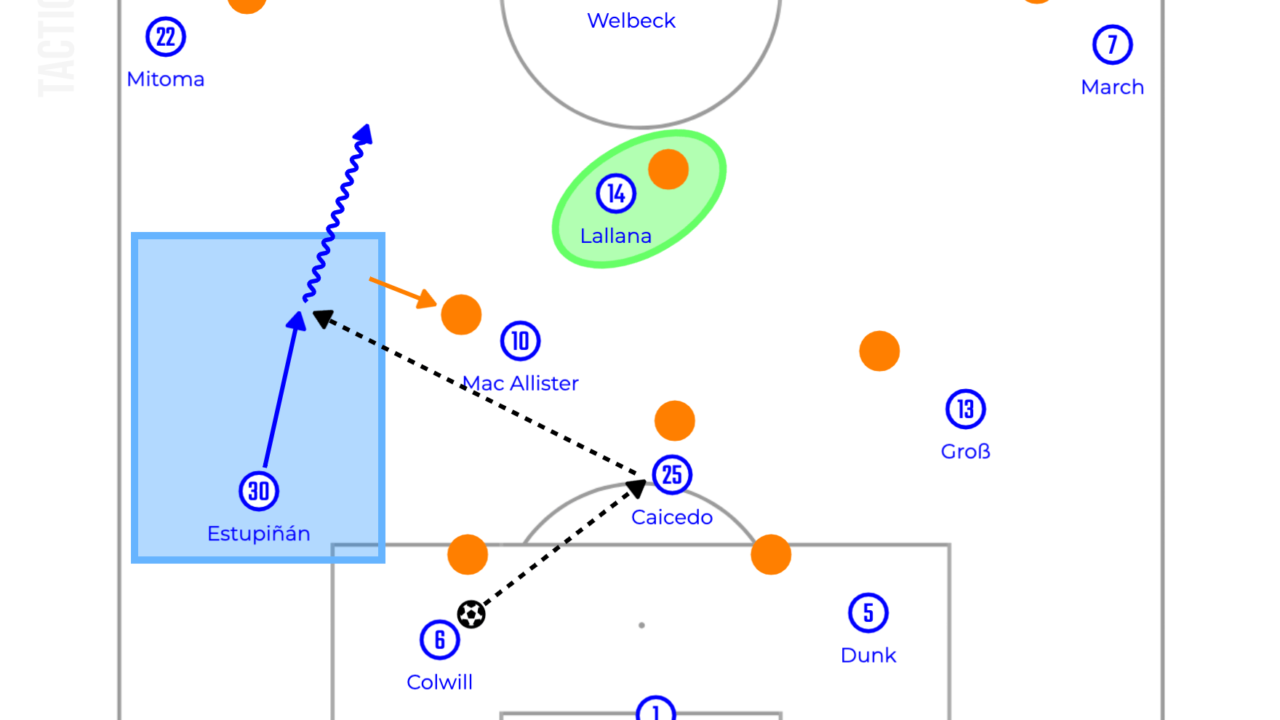 I must apologise to you. Last time the tactics of Brighton were analysed, they were still suing back three, but now, they stick to back four. The principle of De Zerbi have not changed from the period of back three, so I believe it is worth reading the previous article.

Brighton & Hove Albion Tactical Analysis [Tactical Masterpiece from Graham Potter to Roberto De Zerbi]This article gives you an insight about tactical analysis of Brighton under Roberto De Zerbi. The detail of both in possession and out of possession are discussed. ...

These days, it is said that systems do not matter. Then, however, why did he change it from back three to back four. There must be reasons. Therefore, in this article, the detailed tactics of Brighton with back four are going to be analysed and the difference between back three is also discussed. Please enjoy the analysis.

The Opposition Pressure by 1st Line

The system when they build up is illustrated below. 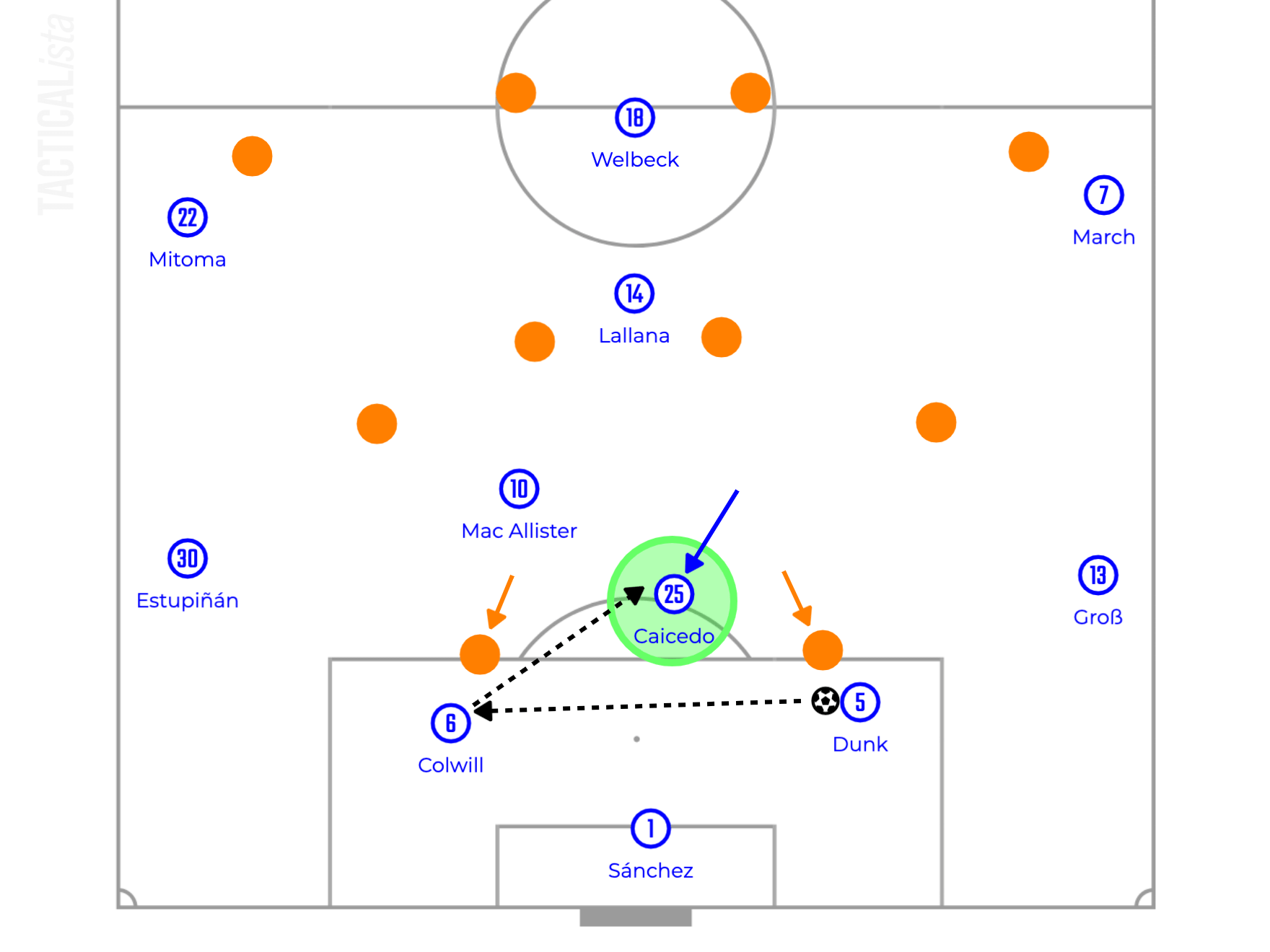 In this case, only opposition attackers are pressing and midfielders focus on defending as a line. Therefore, Caicedo can turn and face forward. As the opposition midfielders try to close the gap between them, it is difficult to play through. Consequently, he often plays wide to one of the fullbacks directly or using Adam Lallana who drops back in front of the opposition second line. 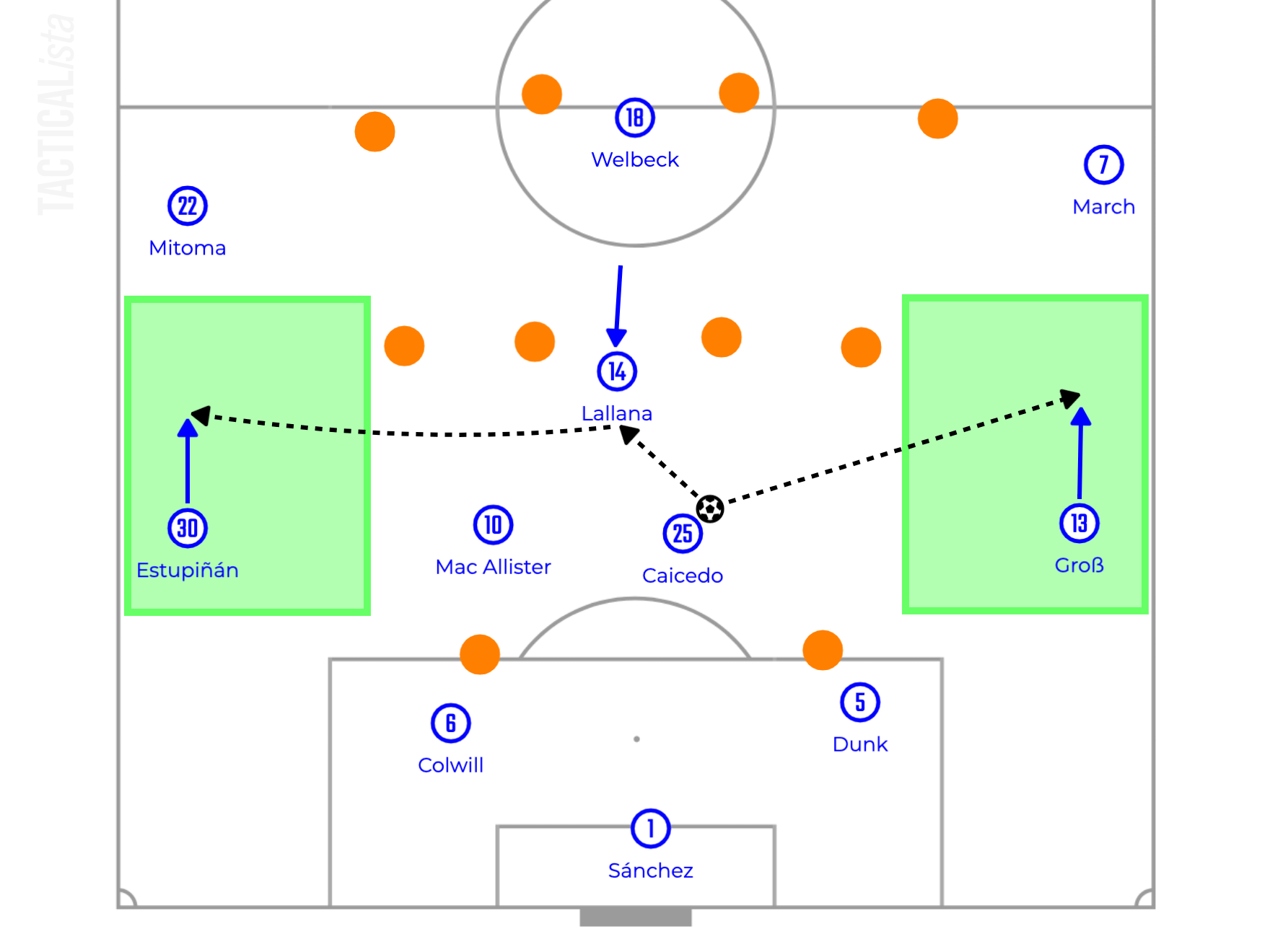 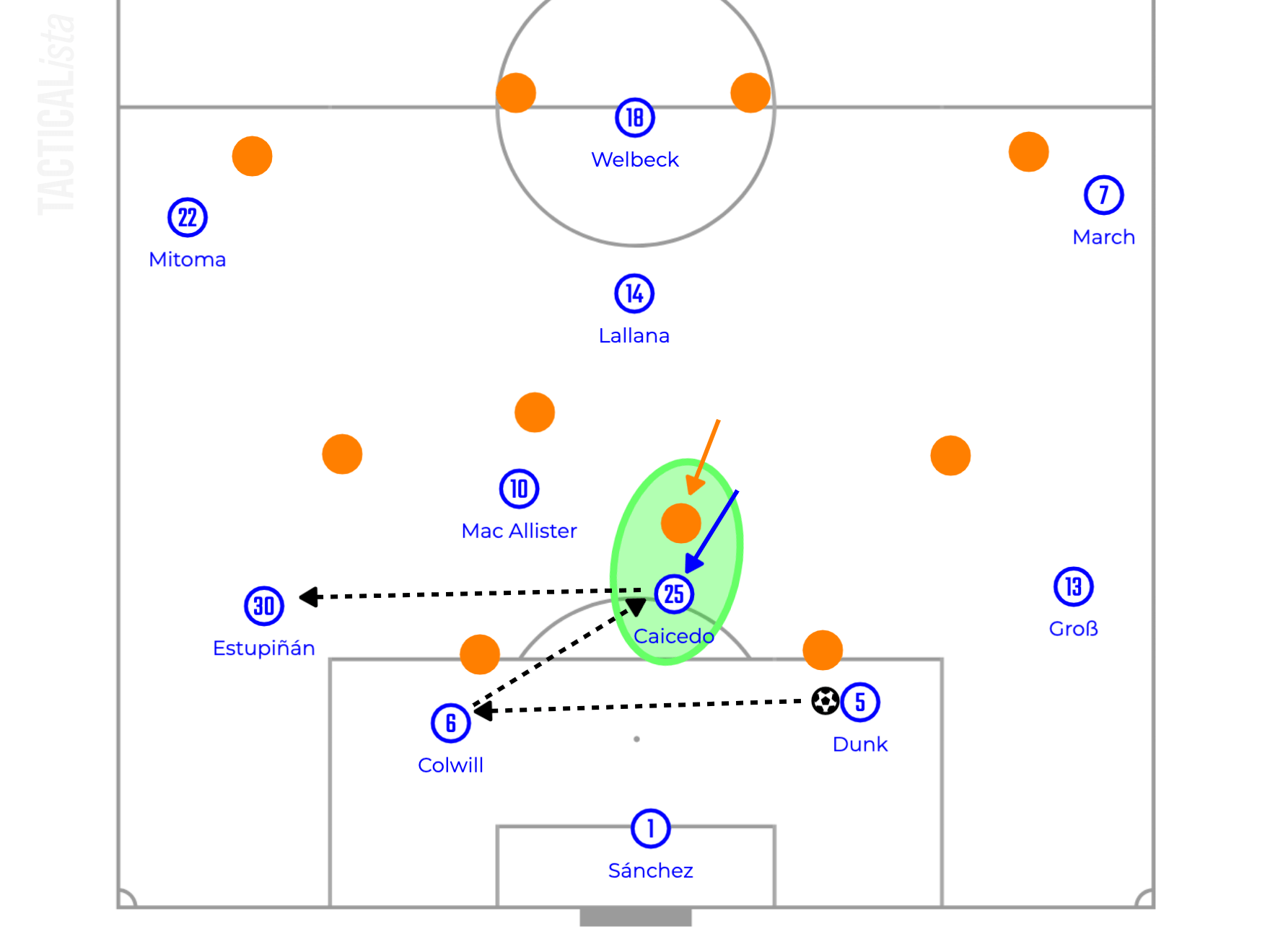 Even though being man-marked by the opponent, there is always a space in front of him. However, if he tries to receive the ball with standing still, the opponent can step up and intercept the pass or at least make a physical contact. Thus, in order to avoid this situation, receiving the pass with moving towards the ball, or away from the opposition marker is extremely important to keep the ball in control under high pressure. After receiving the ball, he can play back to one of the centre backs, fullbacks, or Mac Allister next to him. By repeating this, it is possible to keep the possession under high pressure and they can use more time to find a spare player who can break the opposition second line. 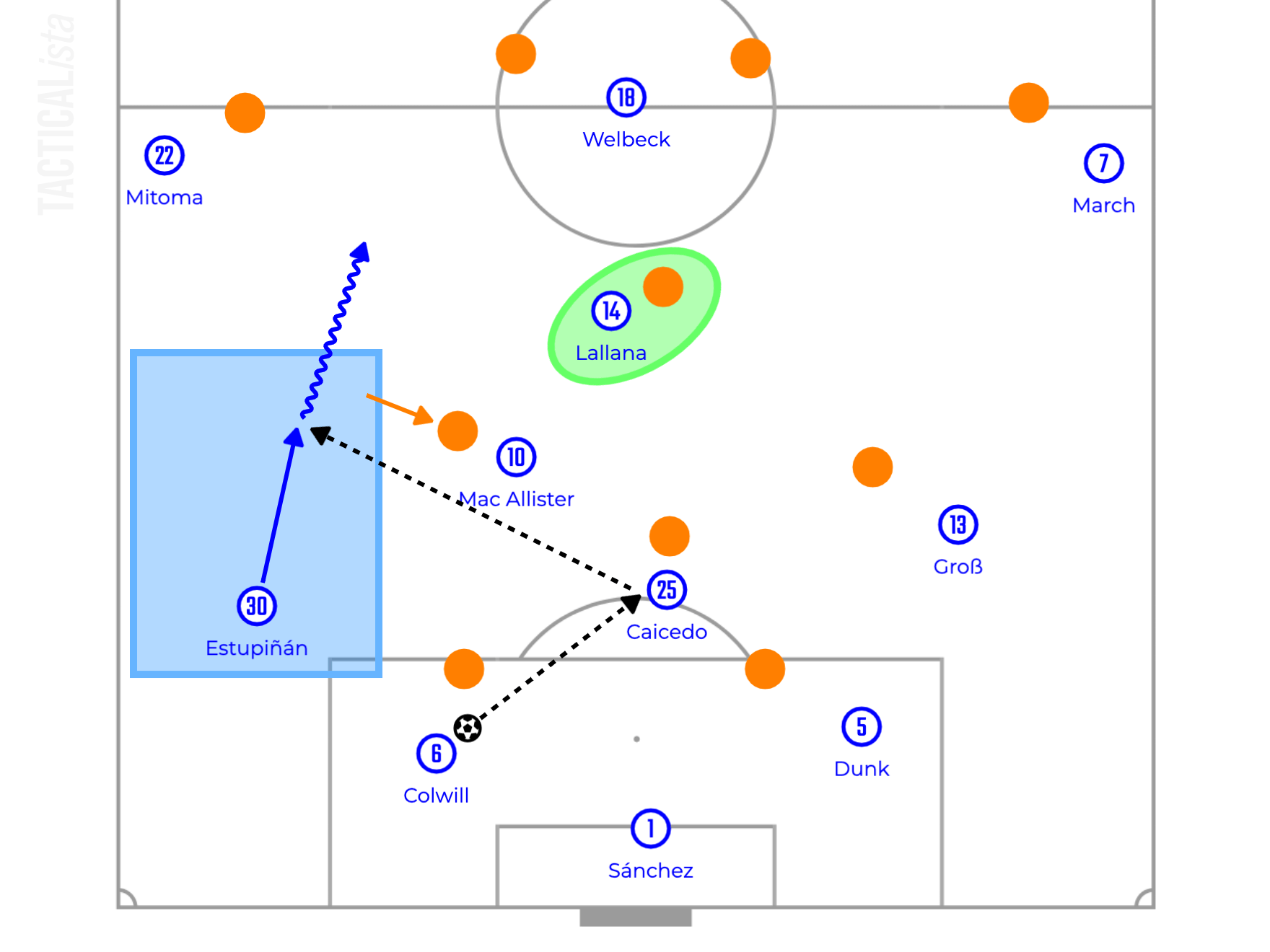 No Pressure to CB on the Ball

So far, how they progress the ball by inviting the opposition pressure was analysed. However, not all teams press high against Brighton. In this case, it is difficult to find a space in between lines. However, in contrast, the centre back on the ball is not under pressure and able to play everywhere he wants. Thus, they try to attack the space in behind. 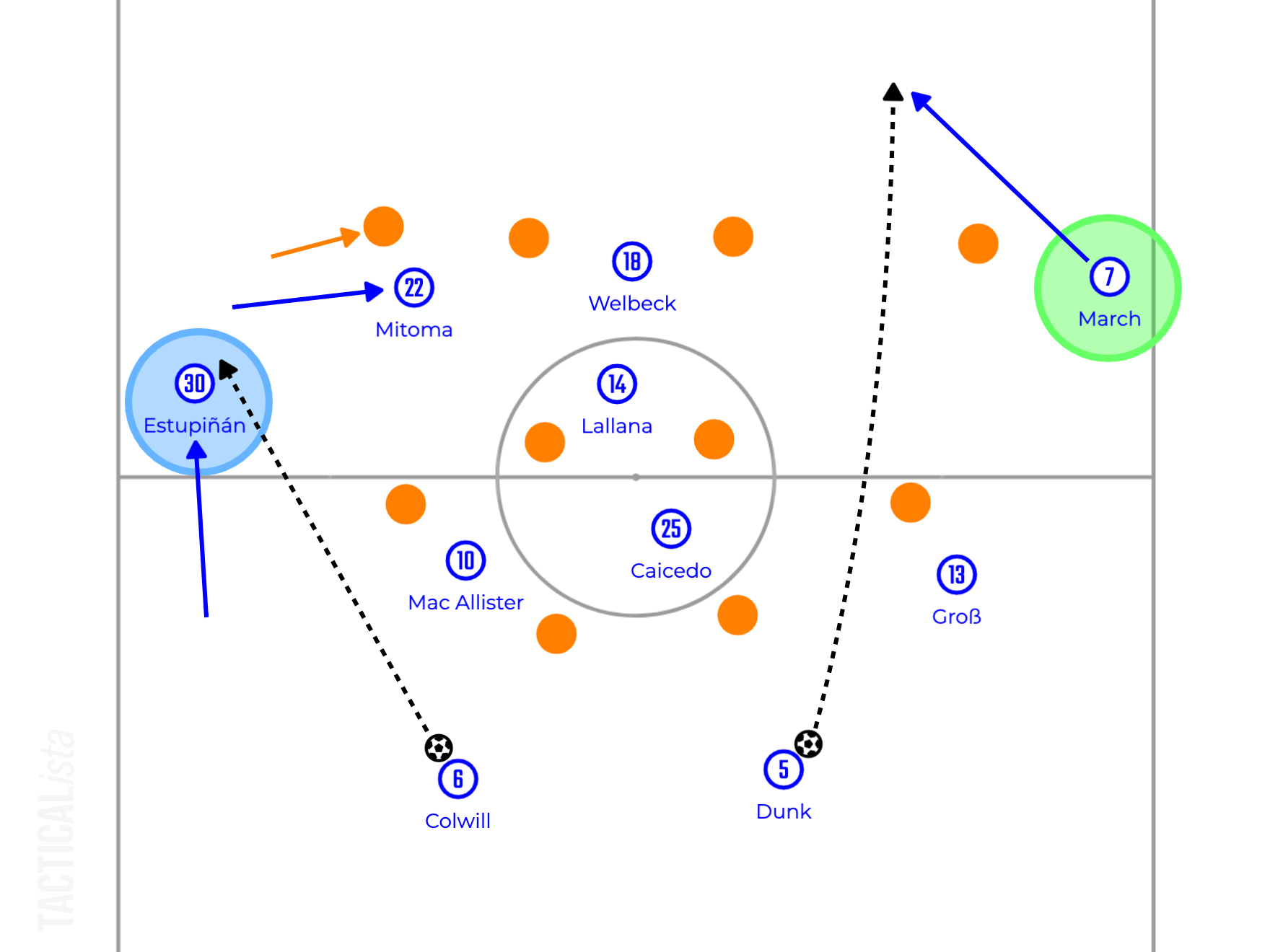 The first option is playing in behind with the winger’s diagonal run. As Lallana or the striker often drop back to offer a passing lane, it is wingers to keep the width and depth to pin the opposition defenders. Therefore, when playing long in behind, wingers are the target to receive the ball. Additionally, if the winger is marked by the fullback, there will be huge space for the fullback to exploit. As soon as the winger makes the diagonal run and drag the fullback out of his position, the fullback also steps up to receive the ball with breaking the opposition second line.

Their main objective is attacking quickly after beating the opposition pressing. Thus, attacking against the deep defensive block is not the first choice, but not too bad thanks to talented wingers, Kaoru Mitoma and Solly March. Both wingers are excellent at taking on the opposition fullbacks and beating them. Therefore, their structure in the final third is wingers in wide areas and forwards and fullbacks exploiting the middle area with vertical movements. 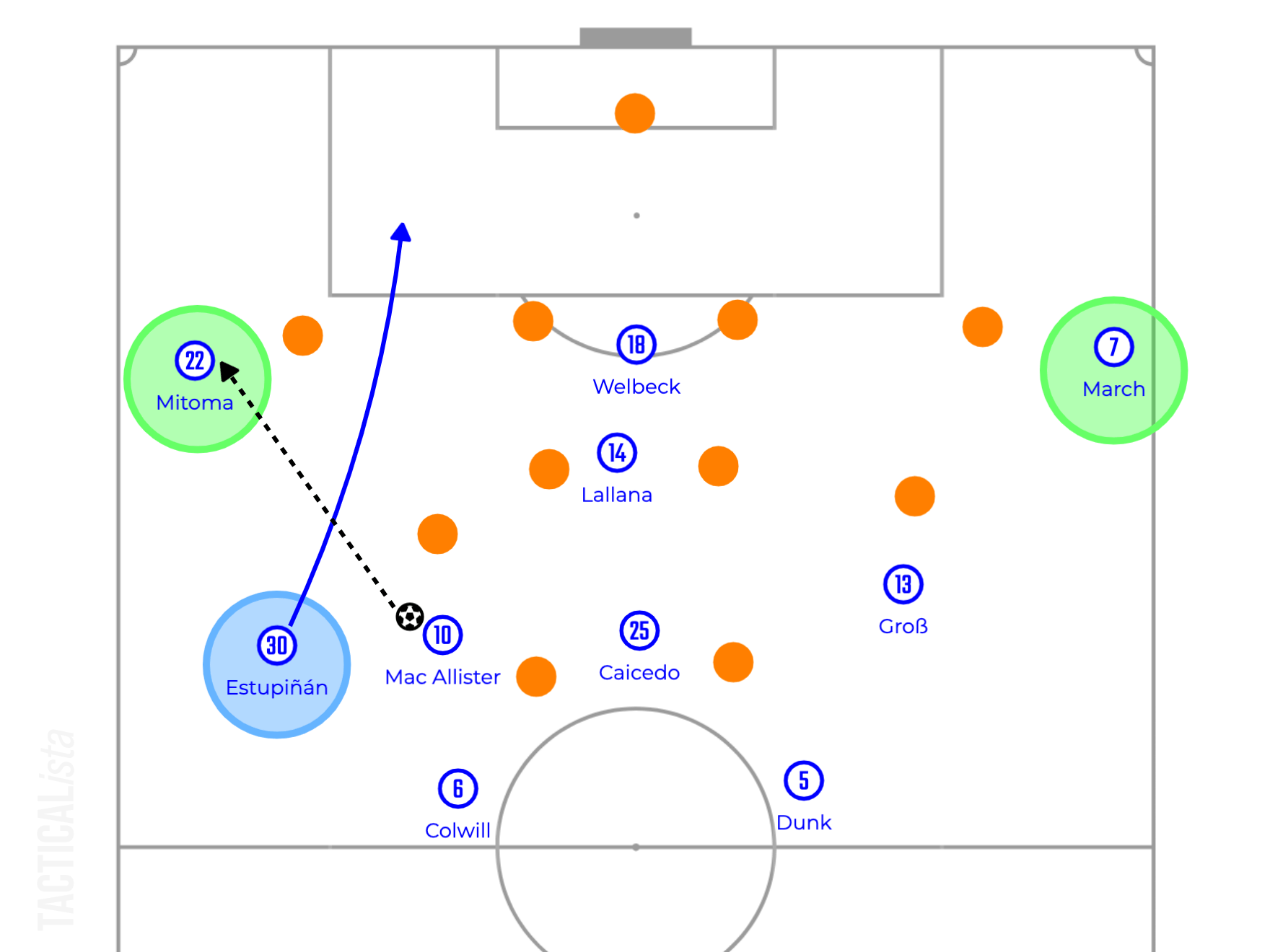 Basically, playing wide and letting the winger take on the opposition fullback are the main way of creating chances. To support this, fullbacks positioned inside often make a run into the channels to make 2v1 with the winger.

Another way is playing in behind the opposition back line. This was discussed in the previous chapter about building up when the opposition team do not press. The structure is similar, but in the final third, not only wingers but also fullbacks or two forwards are also running in behind. This is effective because it is difficult for the opposition defenders to mark players running in behind from far away. They can deal with the run by a striker because they can always focus on him. However, if players who should be defended by midfielders make a run in behind, it is a tough task for defenders because they are running from the out of zone where defenders can defend. 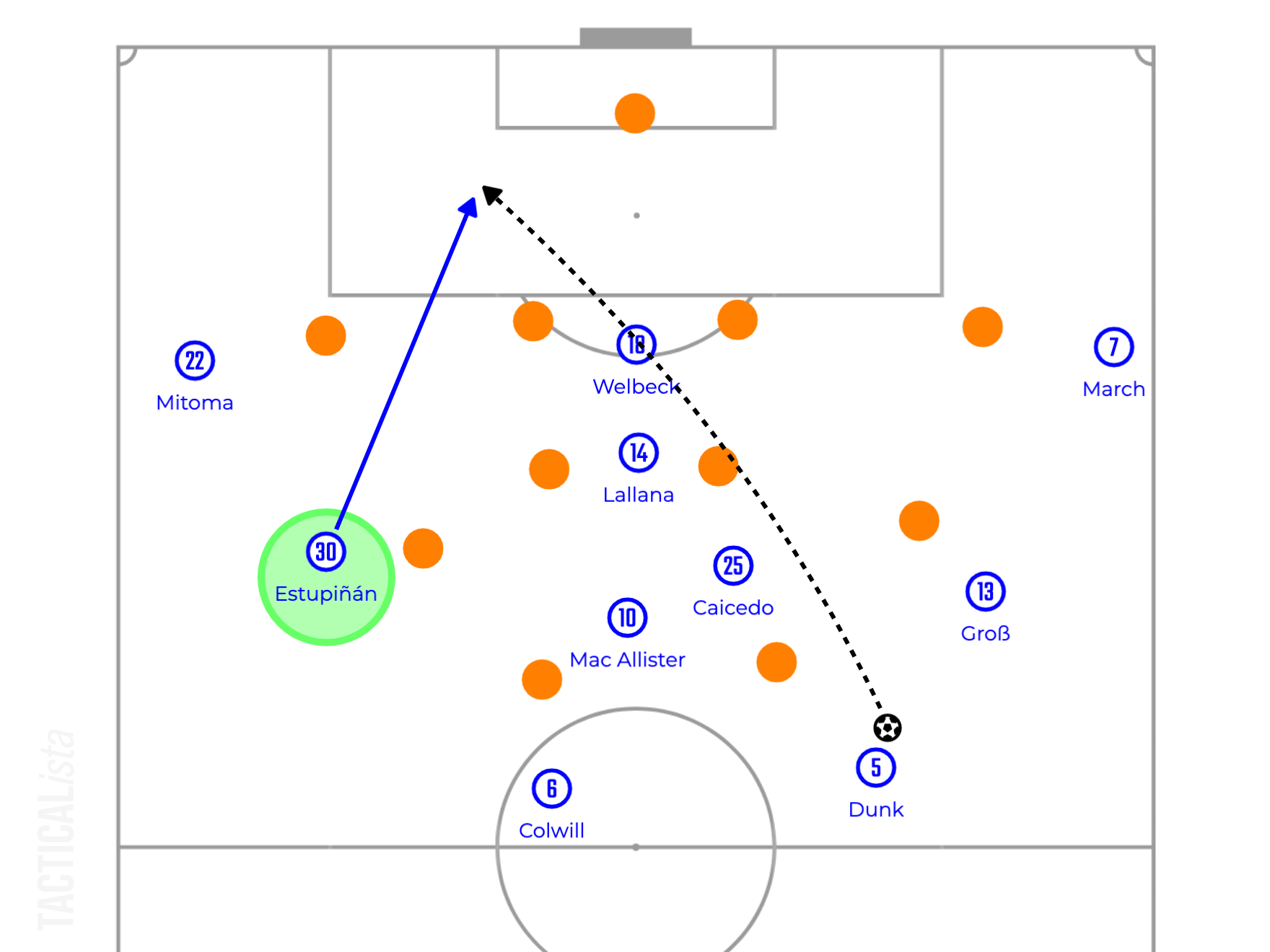 Overall, attacking against deep defensive blocks is not their favourable situation, but thanks to quality of wingers, they could create chances so far.

The Difference between Back 3 & 4

However, why does De Zerbi prefer a back three to a back four? There are possibly two reasons.

In order to play out from the back, they mainly use movements which midfielders or even a striker drop back to receive the ball under the opposition high pressure. In this case, wingers who keep width and depth to pin the opposition defenders are crucial. With a back three, it was a job for wingbacks, but it is difficult for them to cover wide areas alone. This is because they had to drop back if defenders or defensive midfielders are pressed intensely and want to play wide away from the pressure. However, if wingbacks do so, nobody can keep the width and depth to pin the opposition defenders. Width a back four, there are fullbacks and wingers in wide areas, so it is possible to have two players for two tasks.

Additionally, players who try to pin the opposition defenders must have an ability to threaten them. If not, the opposition fullbacks can step up to join the pressing with leaving wide attackers. In terms of this, recent form of Mitoma is another reason of the back four. He can beat the opposition fullback by not only taking on but also running in behind. Pervis Estupiñán can play as a fullback so using Mitoma as a winger is the best option.

Overall, not only what De Zerbi wants to do but also the quality of wingers helped him to use a back four as a main system, and it was one of the most important decisions for Brighton in this season. Thanks for reading.