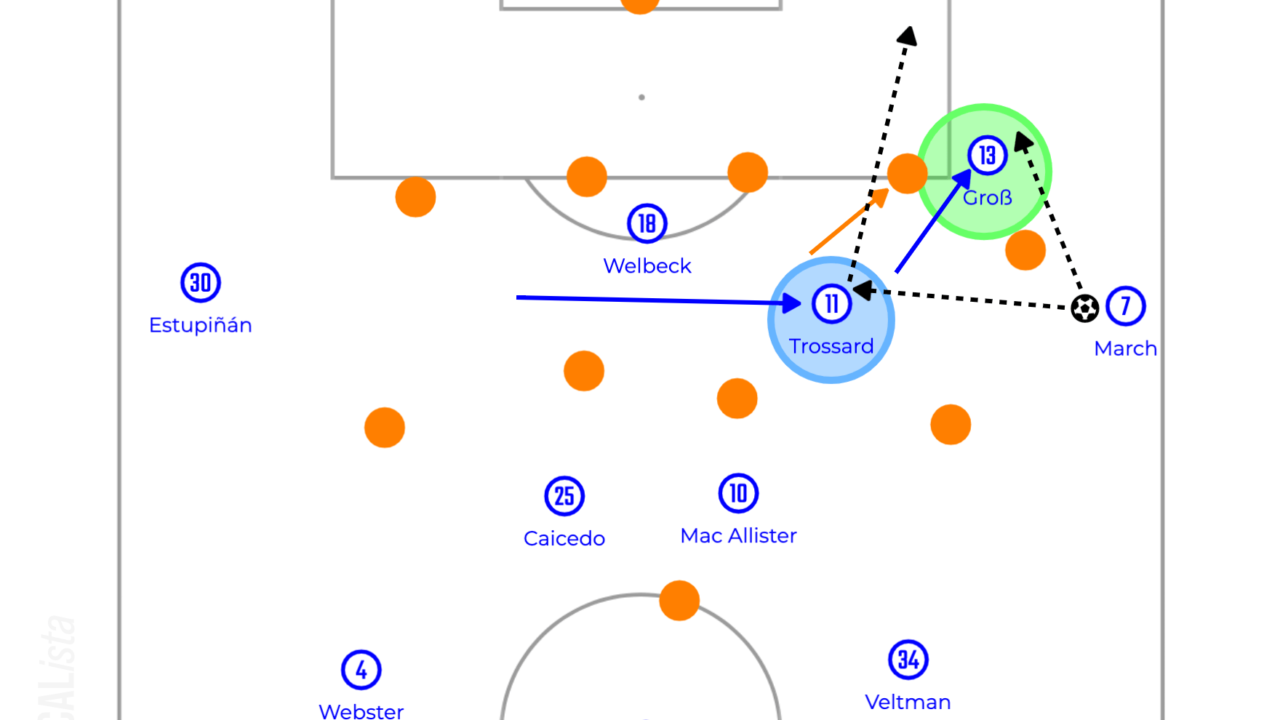 In this article, the tactics of Brighton & Hove Albion under Roberto De Zerbi are going to be analysed. Under the spell of Graham Potter, Brighton had been regarded as one of the most tactically advanced team in the Premier League. Therefore, it was a fair decision to appoint Roberto De Zerbi, who managed Shakhtar Donetsk or Sassuolo, after Potter leaving Brighton for Chelsea. And as it was expected, new Brighton under the Italian is also surprising football fans with starting his era by the dramatic 3-3 at Anfield.

In possession, they are extremely organised but also flexible in the final third. The build up play has been a trademark of De Zerbi and well functioned even against Liverpool’s pressing. However, out of possession, they have so many things to improve. They tend to follow the opponents too much and cannot work as a team in many occasions.

Let’s begin with analysing the build up play. This is the strength of Brighton and it can kill Liverpool’s pressing at Anfield.

Overall, they try to make the pitch big as using the goalkeeper and invite the opposition pressure to crate and exploit the space up front. This is quite similar to the tactics of Aston Villa under Unai Emery, so I believe the article below can help you to understand this type of building up well.

Aston Villa Tactical Analysis [Unai Emery’s Domination of the Depth of the Pitch]In this article, the tactics of Aston Villa, who appointed Unai Emery as a new manager, are going to be analysed. In possession, they try to play short passes to drag the opponents out and exploit the space in behind them quickly with four attackers. Then, out of possession, the back line is set extremely high to press aggressively and force the opponent to play long roughly. Overall, new Aston Villa attack with maximising the depth of the pitch and defend with minimising the depth of the pitch. Let’s get started with analysing their build up tactics....

Obviously, they use back three and four, so the tactics with back three are going to be analysed first and the differences will be discussed later.

As it was mentioned, they try to drag the opposition players out by playing out from the back. 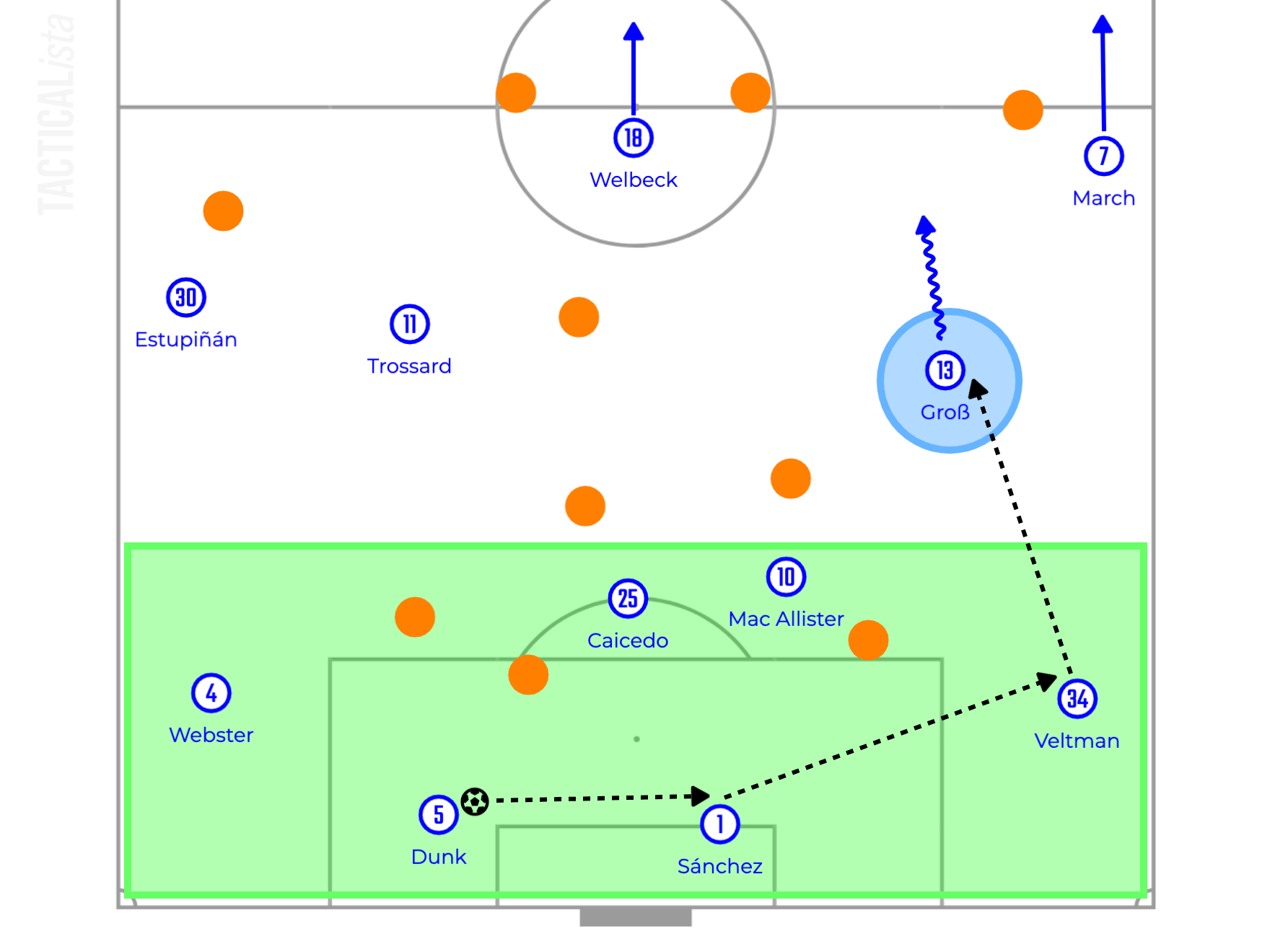 Both defensive midfielders are positioned themselves around the D, quite deeper. Additionally, thanks to the nice and high position of the wingbacks, there is a huge space in between lines where Pascal Groß or Leandro Trossard often receive split passes. After someone turns and faces forward in between lines, players in the next lanes always make a run forward to receive the ball in behind or forcing the opposition back line to retreat.

Furthermore, there is a flexible rotation in the right side. In the case Groß cannot be unmarked, Solly March often drops to receive the ball while Groß making a run in behind to pin the opposition fullback. 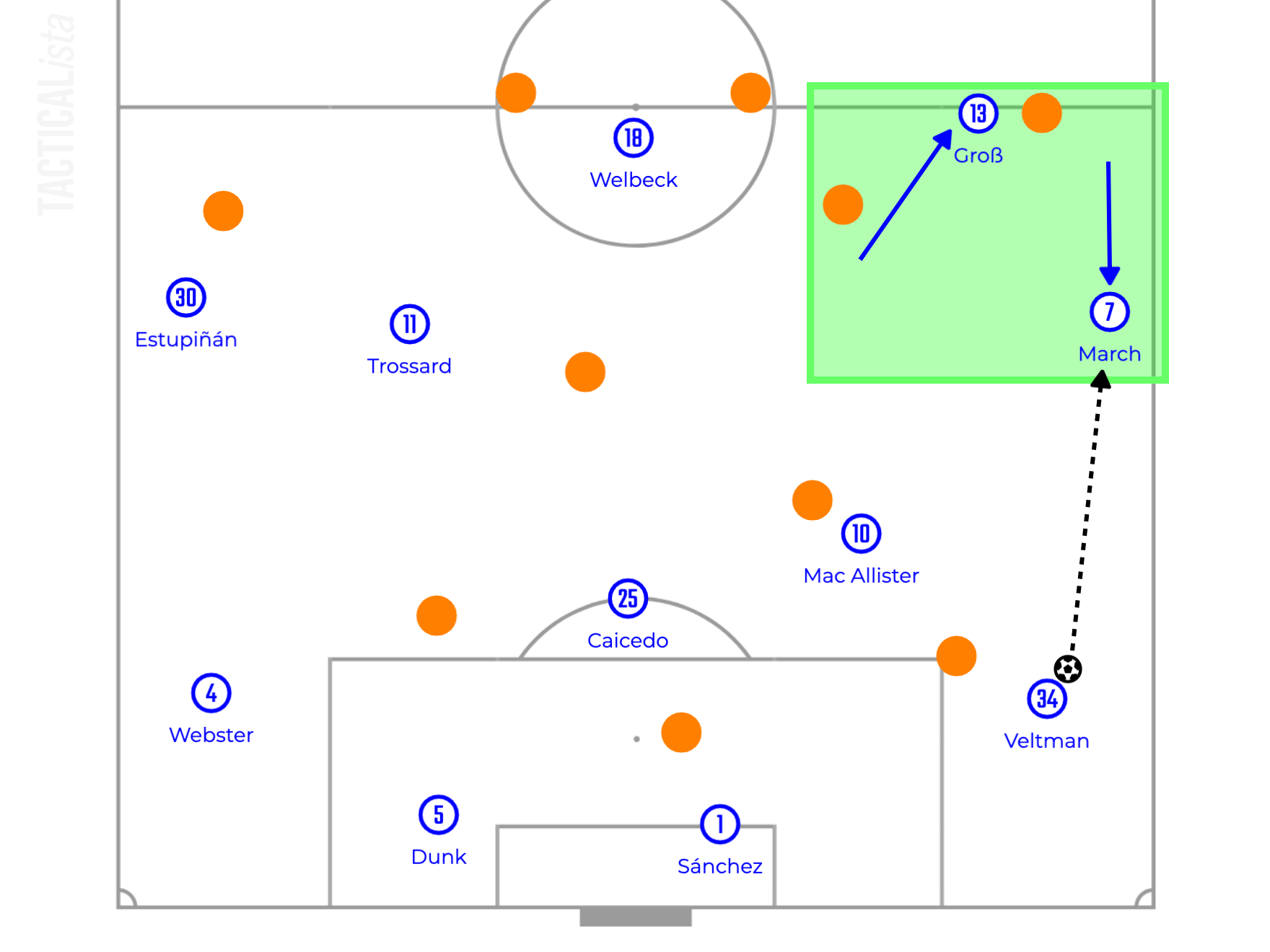 Before the rotation, both Groß and March are marked, but they can confuse the opposition players by swapping the role. And after that, Groß will stay in the wide lane and March will come inside with swapping each lane. This is extremely important in the final third and will be discussed more detail in the next chapter.

In terms of differences between the back three and four, there are mainly two differences. The first one is the stability of keeping the possession. Thanks to the increase of the number of the players at the back, it becomes easier to find a spare player. Additionally, in the back three, the goalkeeper has to play as a centre back, but it is difficult for him to move away from the goal so much. On the other hand, it is possible to keep nice distances between players at the back with the back four. The second difference, however, is the lack of players up front to receive the ball in between the lines. With only four players up front, they tend to be marked by the opposition defenders when dropping back to receive the ball. Therefore, it becomes difficult to let the player on the ball in between the lines.

As there are advantages and disadvantages, the back three can be changed into the back four during building up. The main way of changing the system is Moisés Caicedo moving the left side and Adam Lallana dropping back to be a defensive midfielder. 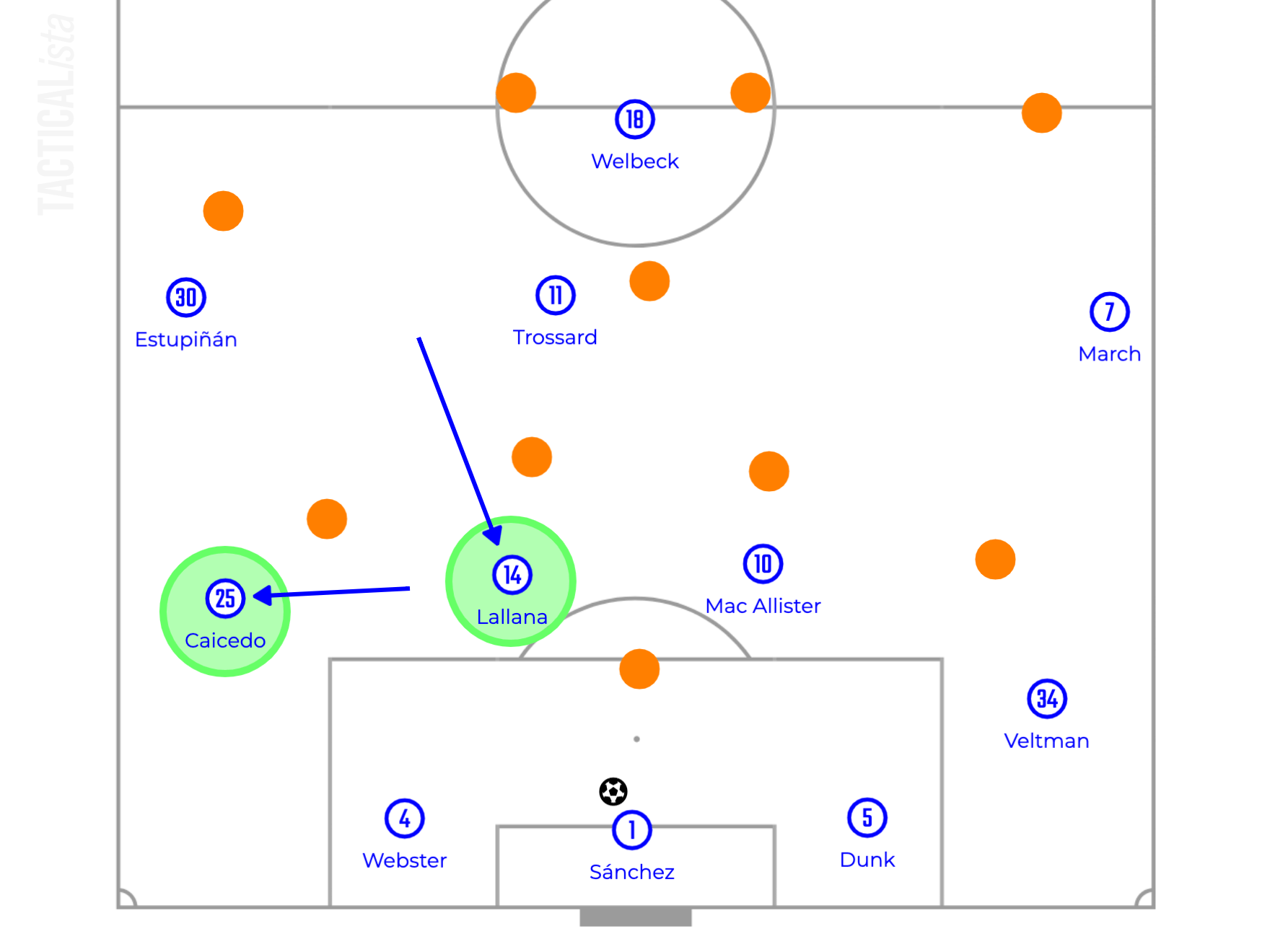 Overall, the style of playing short to invite the opposition pressure and exploiting the space up front is already good enough to beat most of all pressing.

After the opposition team organises the defensive block deeply, the ball is played to one of the wingbacks who is positioned high and wide. Left-footed March in the right side is often the main man to start the attack with Groß and Trossard. 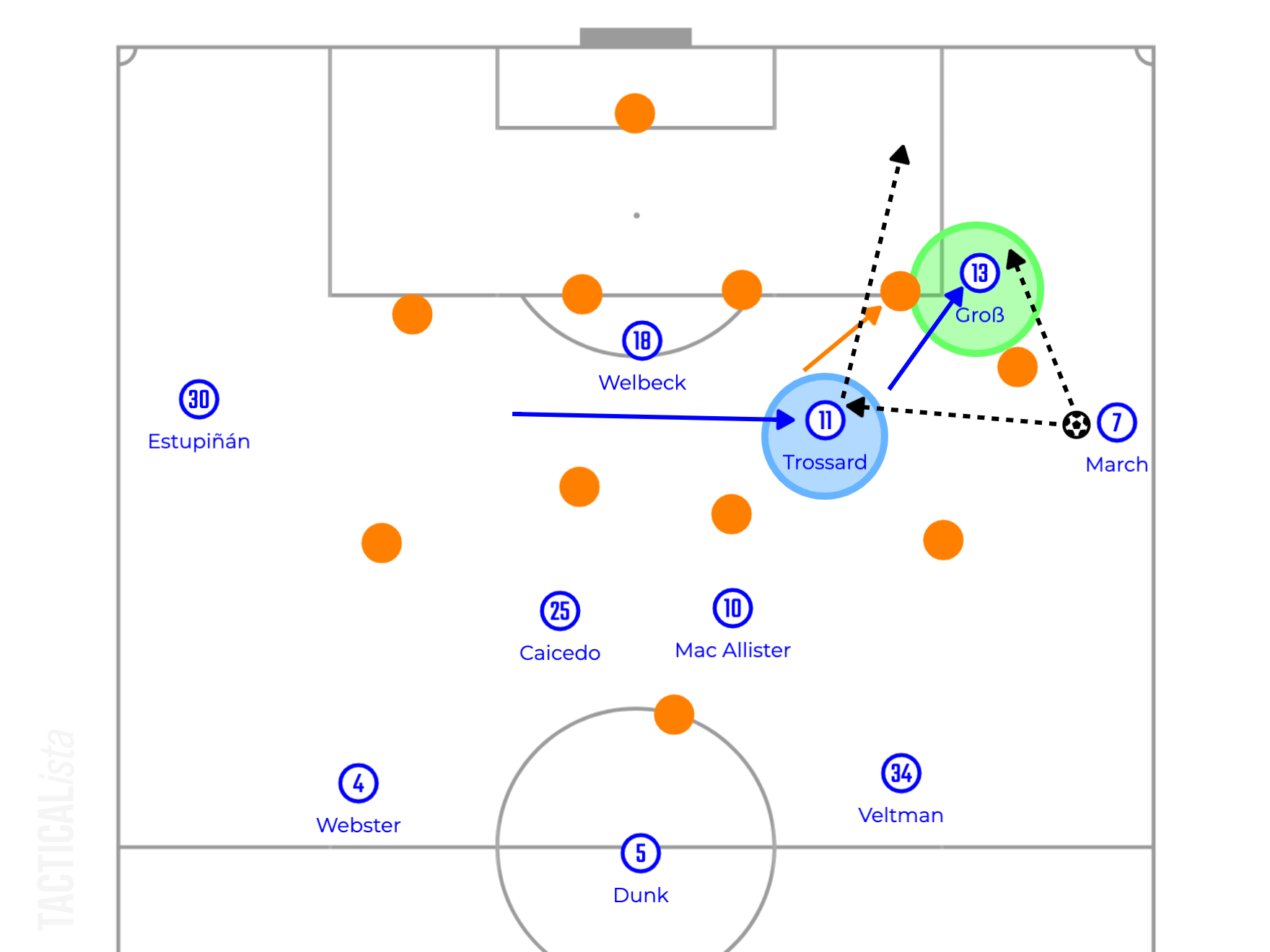 Groß always makes a diagonal run into the channel between the opposition fullback and centre back and this is the first option for March. If the ball is not played, March can dribble inside or playing to Trossard coming across to offer an additional support. This third man support is common in the team and Groß or March will do the same thing if the ball is in the left flank. Especially, as it was mentioned before, when March drops back to receive the ball and switches it in building up, he often follows it and becomes the third man in the left side while Groß keeps the width in the right side.

More importantly, the reason why it is possible to say that they are organised is they can swap each position automatically. 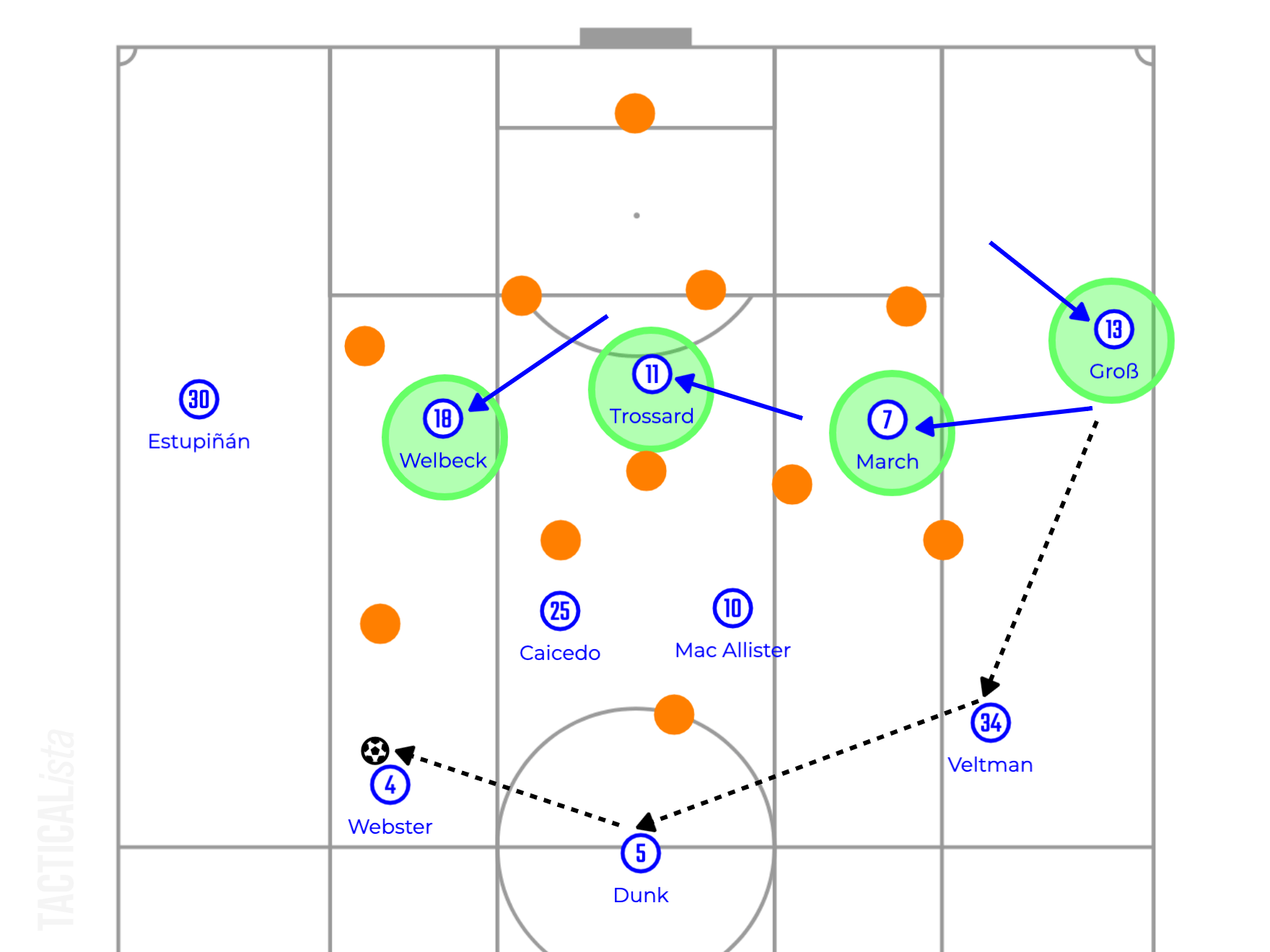 After playing back, they will fill each lane during the ball is travelling. Therefore, they can make an overload in the ball side while maintaining the balance of the team.

Another way of playing into the box is the diagonal runs of wingbacks. This movement is often performed by the right wingback Pervis Estupiñán. 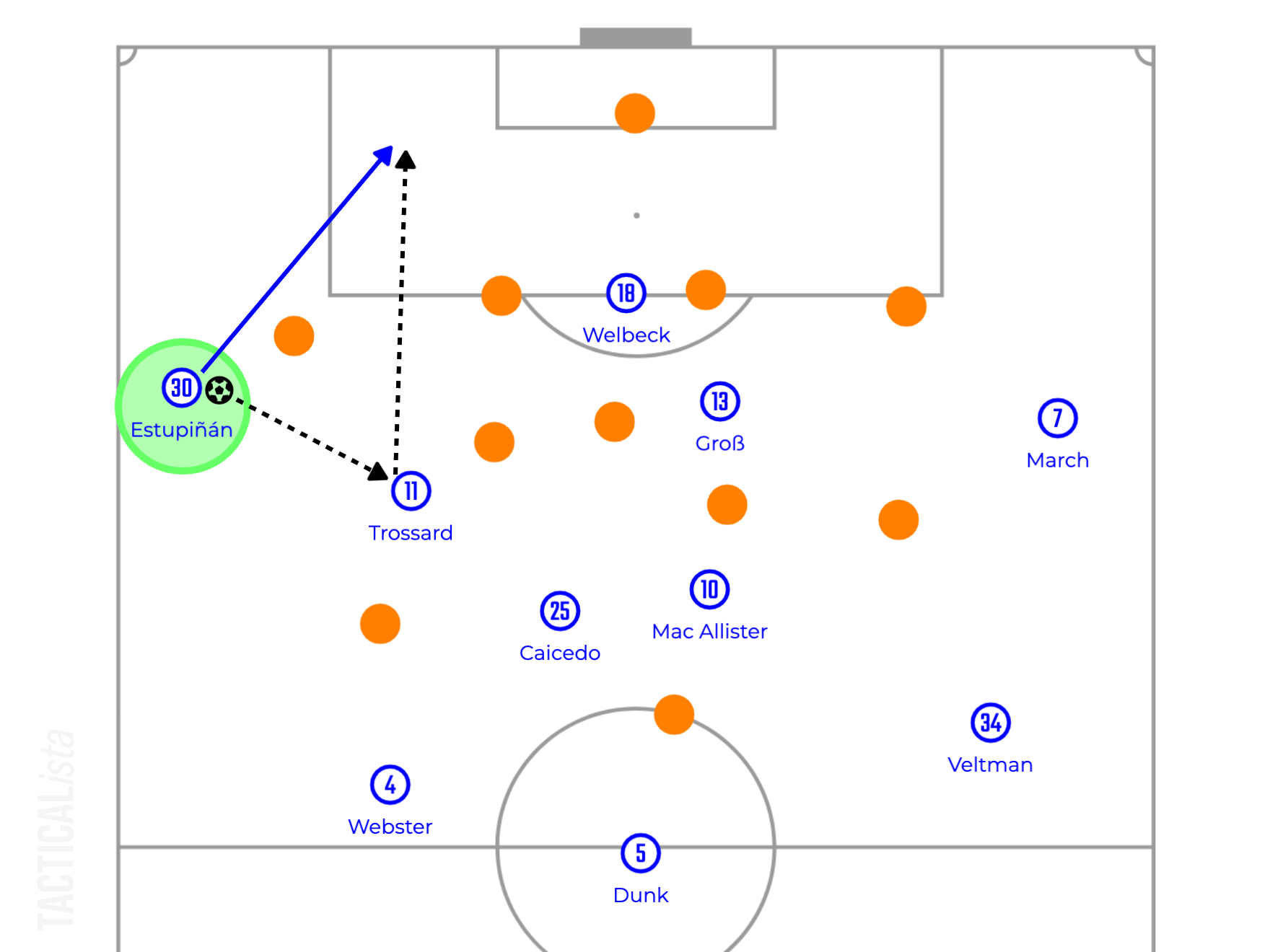 In terms of crosses, they sometimes deliver crosses from outside of the box towards Welbeck or the back post, but the main aim is squaring low and fast balls in the 18 yards box. 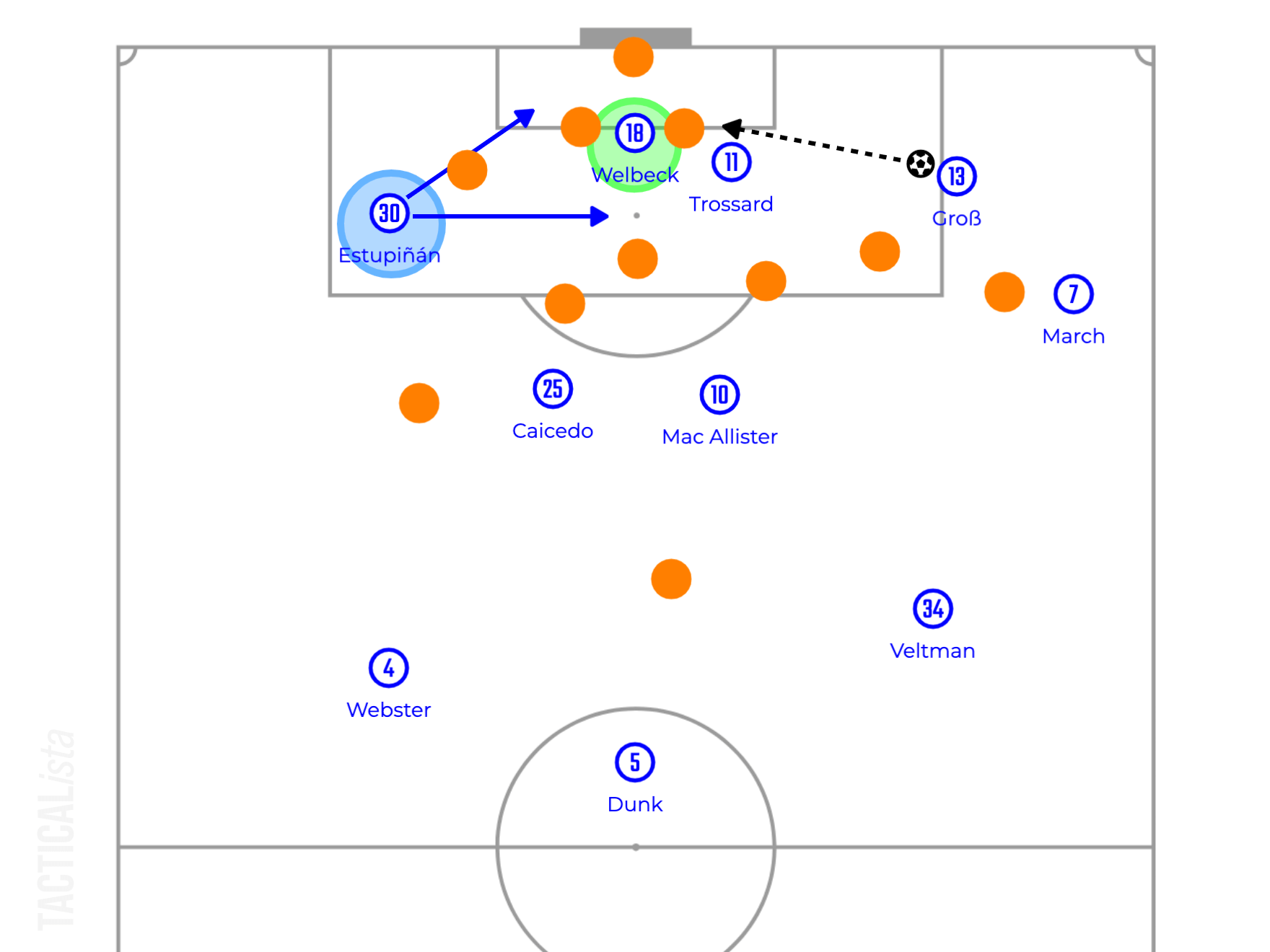 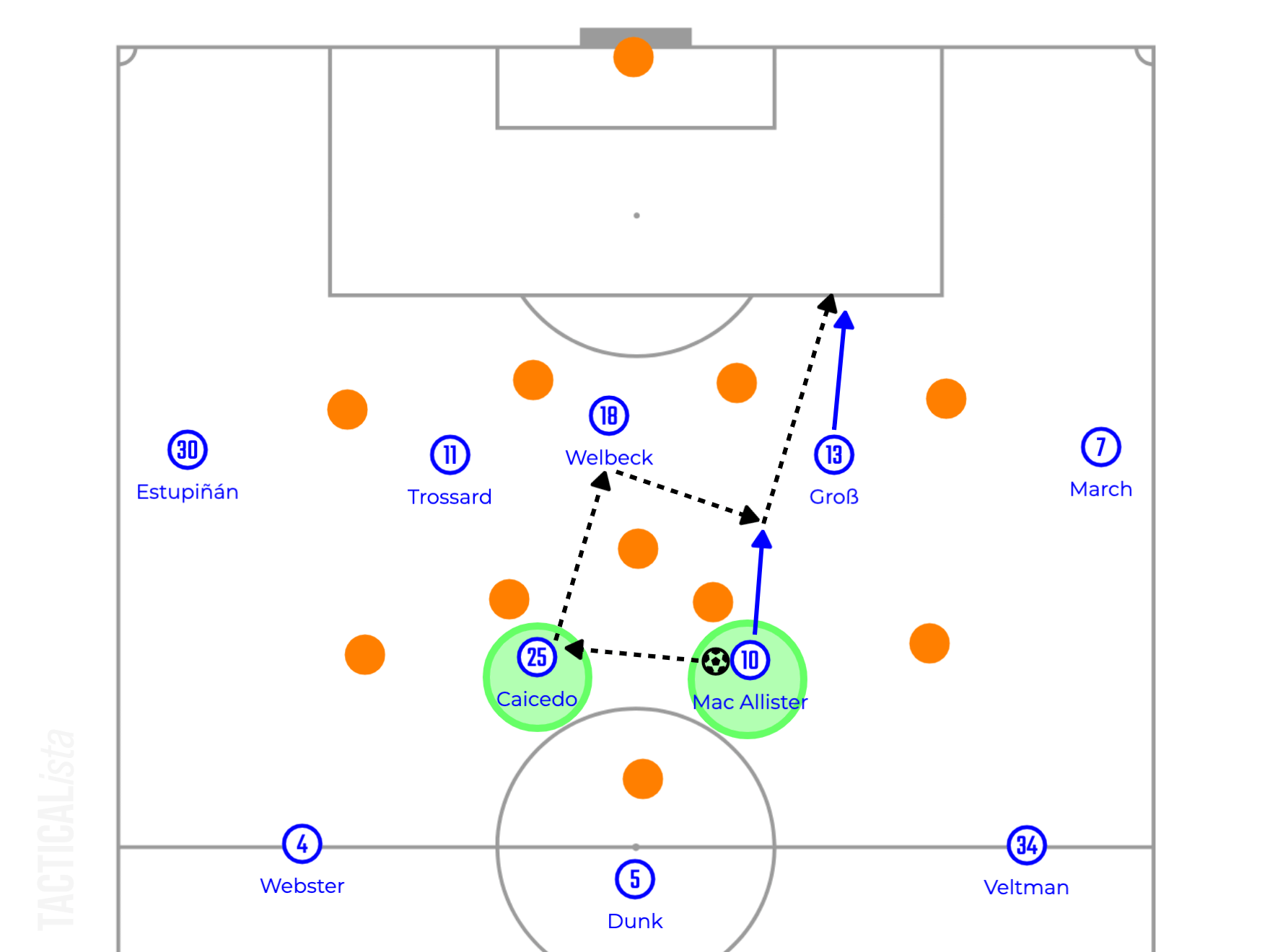 As both attacking midfielders stay narrow in the middle, the player who supports the wingback or attacking midfielder from the back in the wide area is the wide centre back. Adam Webster is great at stepping in with the ball and creating overloads in the left side and Joël Veltman can support March with both overlaps and underlaps. 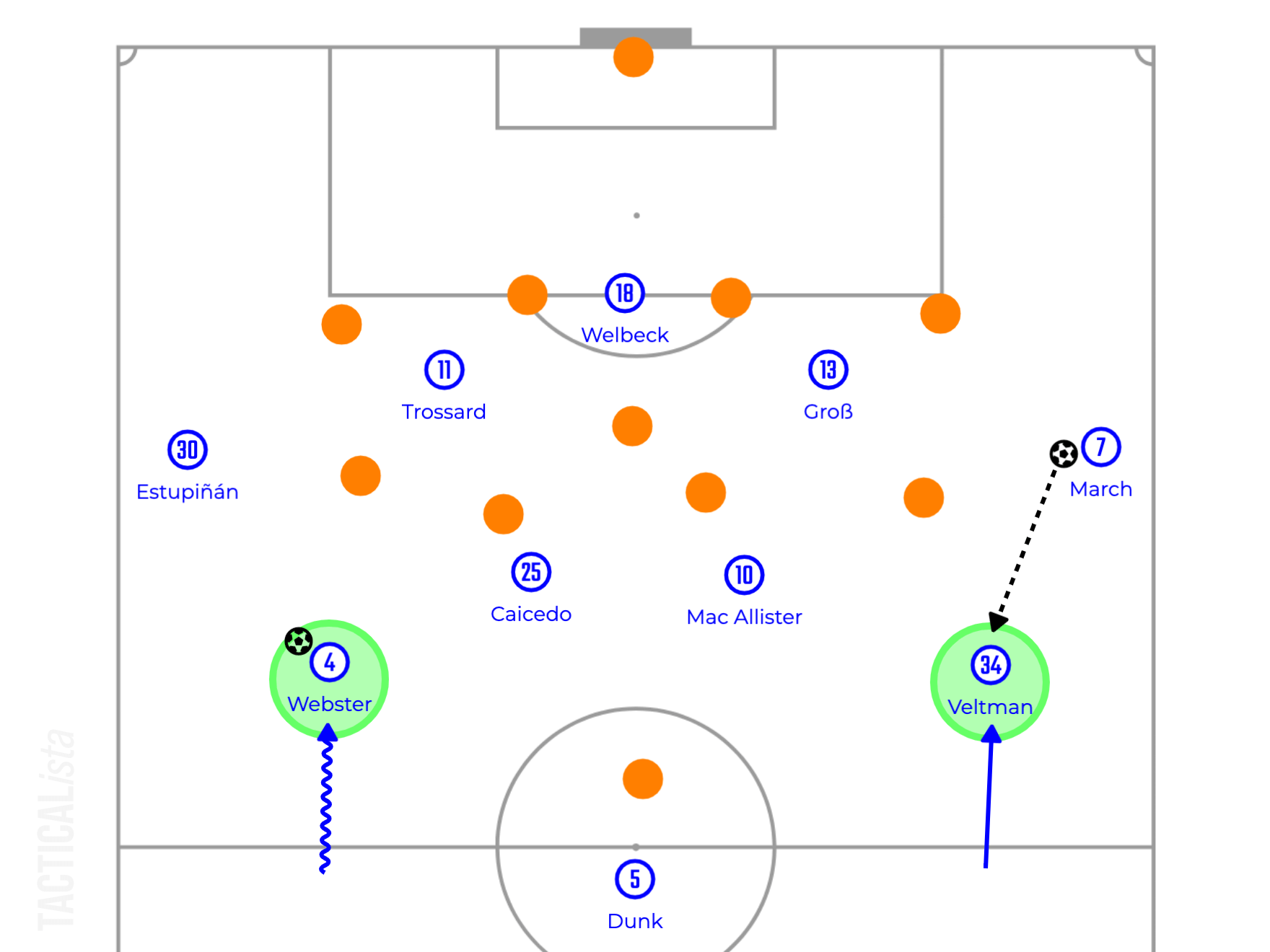 Veltman’s movements can be seen when they are playing with the back four. In this case, not only him but also Estupiñán can make this kind of movements depending on the position of the left winger. 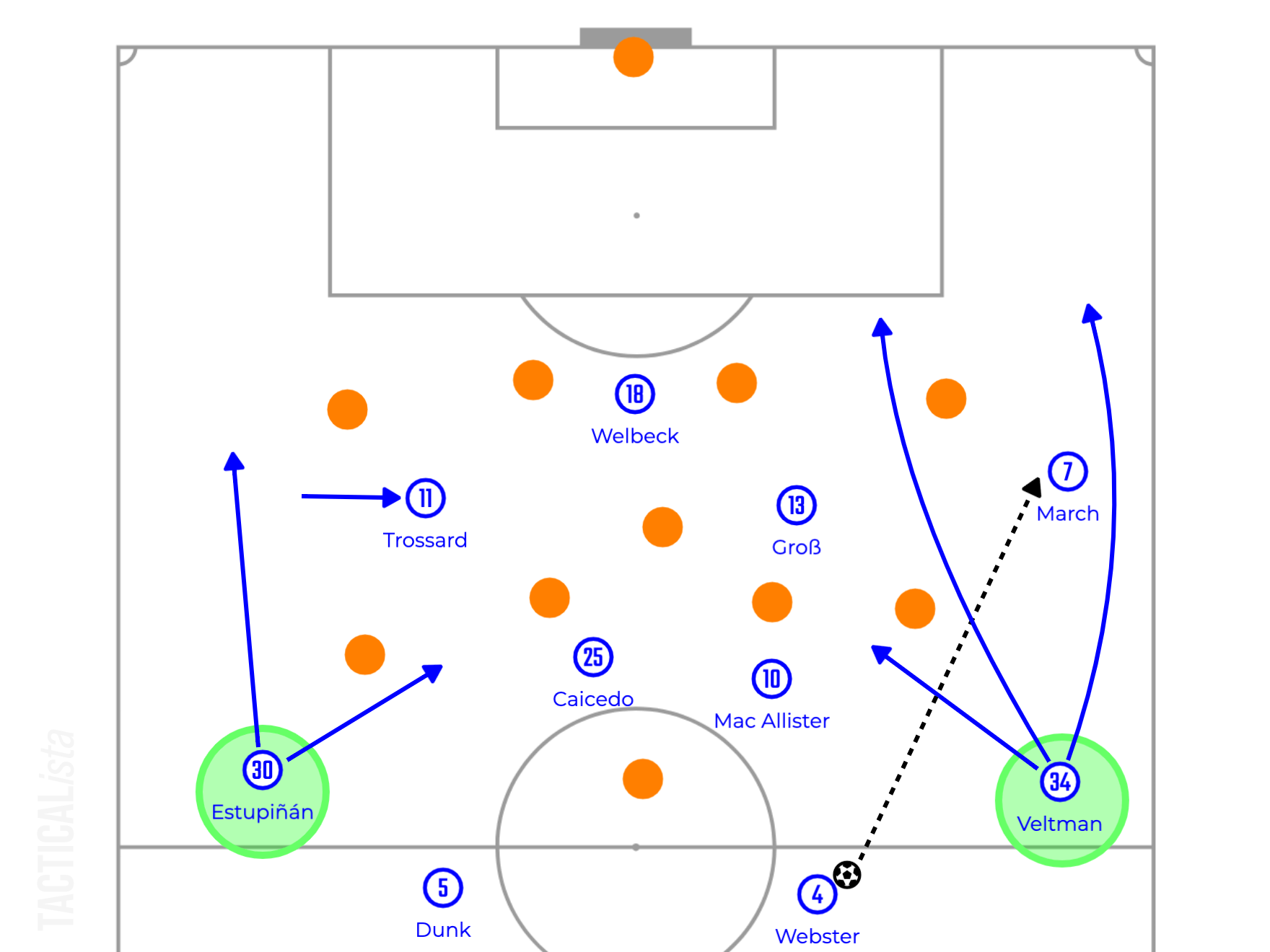 Consequently, it will be more flexible when they are playing with the back four than the back three, but the principles remain same.

In terms of out of possession, they try to press high but not really effective. Individuals tend to follow their marker and cannot defend as a team so much, but it is not completely man marking pressing except for the game against Man City. 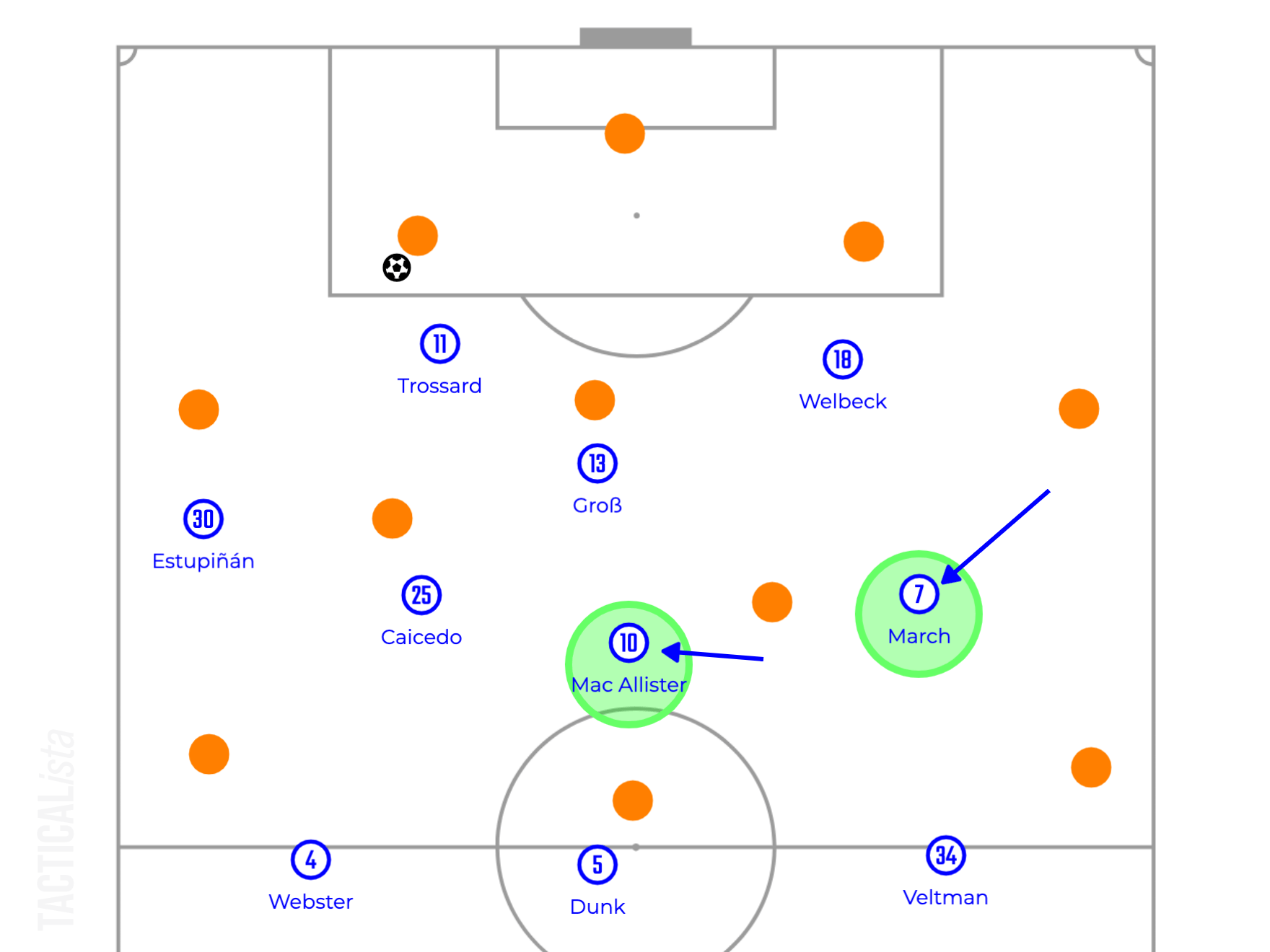 Like zonal pressing, the opposite side players can shuffle across to defend as a line or the first player to press can apply pressure with cutting a passing lane. Therefore, their pressing is not just man marking pressing. However, around the ball, other players cannot follow the trigger, so they cannot lock them in a small area.

In many cases, the defensive midfielders jump to press and leave a huge space in between lines. This area can be easily exploited and one of the weaknesses of Brighton’s pressing.

In the game against Man City, the total man marking pressing was really effective, but unfortunately there was Haaland. As they conceded the first goal from a direct long ball by Ederson, this style has a huge risk. Thus, this will not be the first choice of pressing.

Overall, they need to improve their quality of pressing especially around the ball to increase the time of the possession in a game.

As it was mentioned above, they tend to keep following their marker instead of defending as a line. Therefore, it is easy for the opposition team to find a space to play through.

Especially, in the ball side, they defend with man marking, which can vacate a huge gap between defenders. Throughout out of possession, Brighton is struggling with the balance between man marking and zonal defending. They want to keep applying pressure on the ball, so the nearest player quickly presses to the opposition player on the ball. However, other players around the ball cannot effectively help the first player to press and the opposition can exploit the gap between players.

For the team like Brighton, which focus on playing with the ball, it is not easy to improve the quality of out of possession. However, this is extremely important for them to be solid during out of possession to avoid dropping points. I am looking forward to watching them after the World Cup break. Thanks for reading.