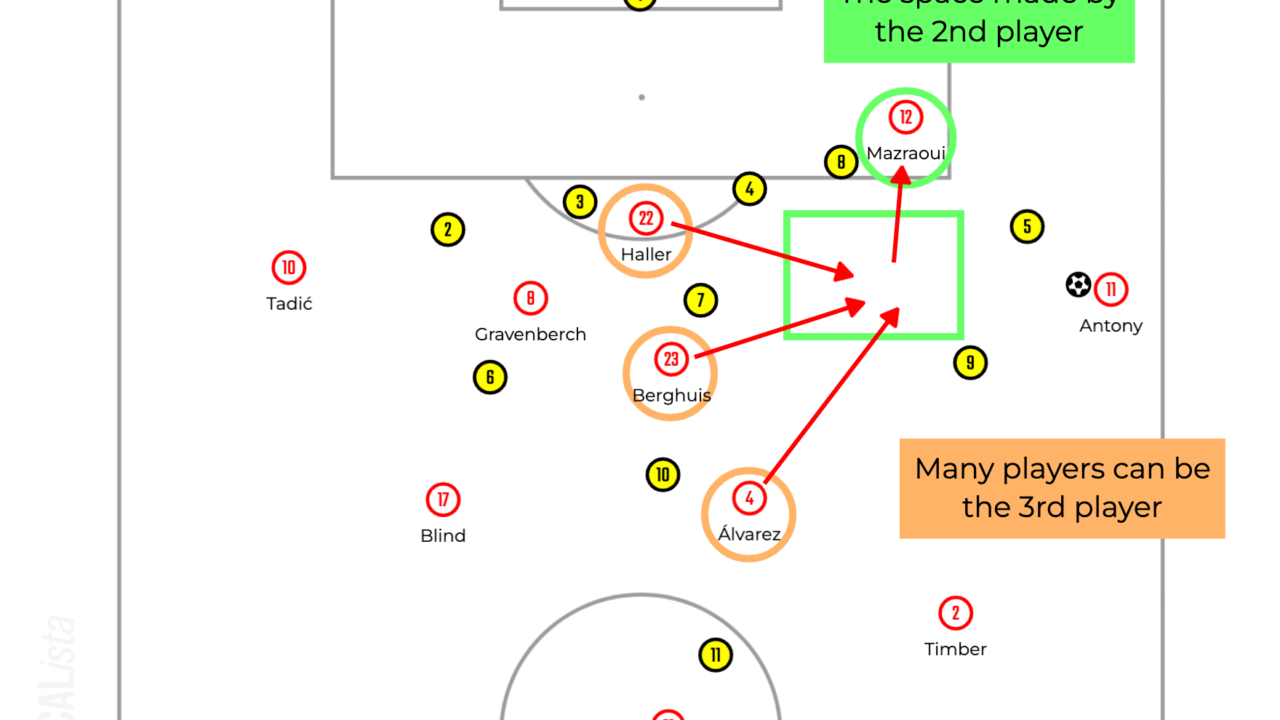 Ajax managed by Erik Ten Hag who will be the next manager of Manchester United is going to be analysed in this article. Especially, I am going to focus on the amazing performance that Ajax scored 98 goals in 34 league games and analyse how they attack in final 3rd of the pitch. 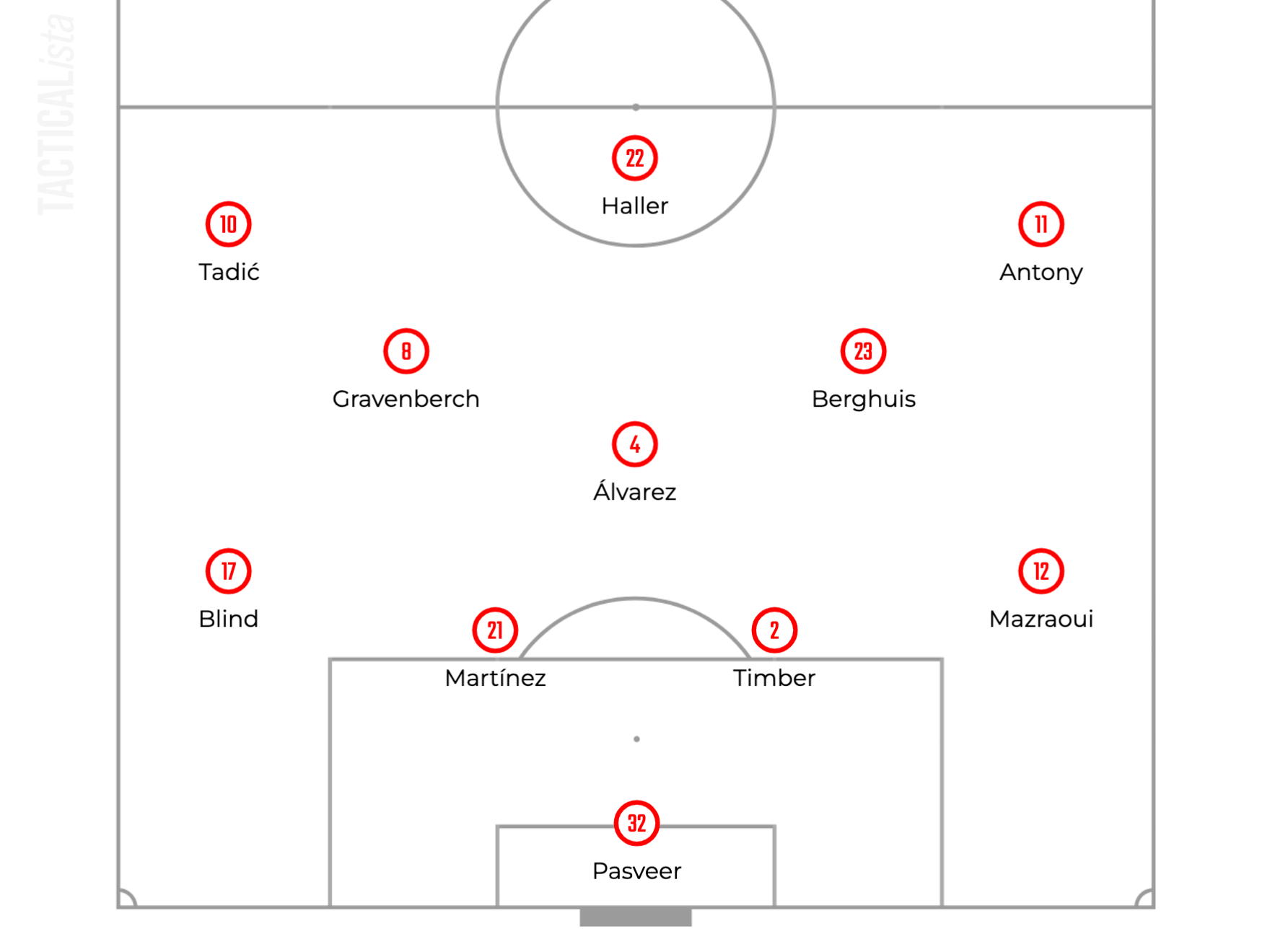 Before analysing Ajax’s final 3rd attacking, let’s focus on the system when playing from the back because it is impossible to divide the connection of each phase of the game. Basically, 3 attackers and 2 attacking midfielders (AMF) of 4–1-2-3 position themselves behind the opposition midfield line and 4 defenders, the pivot and the goalkeeper (GK) try to play through the opposition pressing. Instead of AMFs dropping back to receive the ball, full backs (FB) change their positions dynamically to receive the ball behind the opposition pressure. For example, their movements are not only vertically but also horizontally. The FB often moves into inside of the pitch to receive the ball. 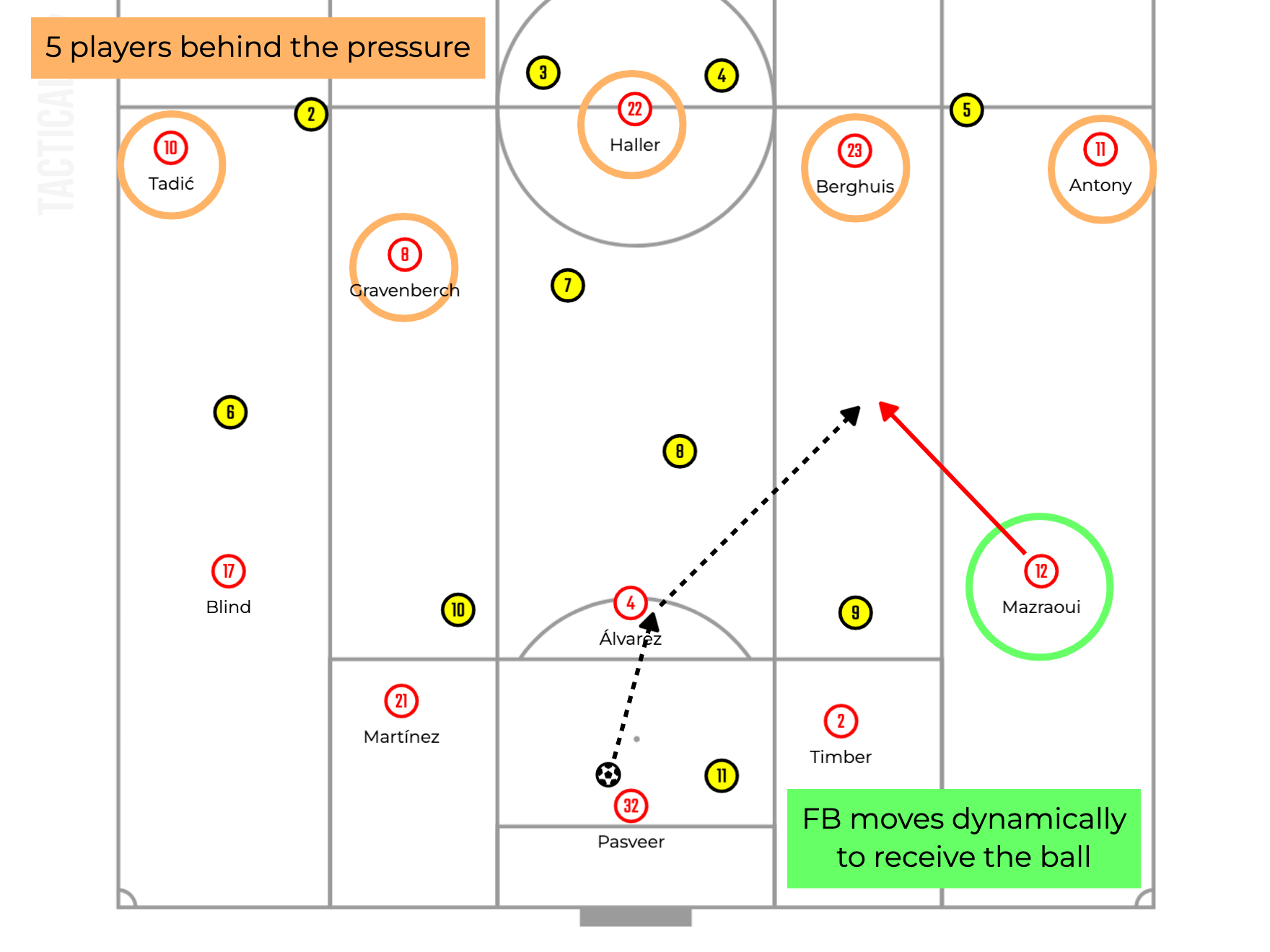 After progressing the ball into the opposition half, there are some differences between the right side and left side. In the right-hand side, the winger (WG) Antony keeps width but the left side is more flexible. The WG Tadić sometimes comes inside and the AMF Gravenberch or the FB Blind move to the wide lane.

Ajax try to penetrate into the penalty area (PA) from WGs. Before playing to the WG, the FB moves into the pocket which is the space between the FB and the centre back (CB) and between the MF line and the DF line. Thanks to this movement, it is possible to create 2v1 against the opposition FB. The opposition FB needs to pay attention to the FB who is closer to the goal than the WG, so the WG can gain time and space to receive the ball. This is the reason why Ajax can give favourable opportunity for WGs to start attacking in the final 3rd. 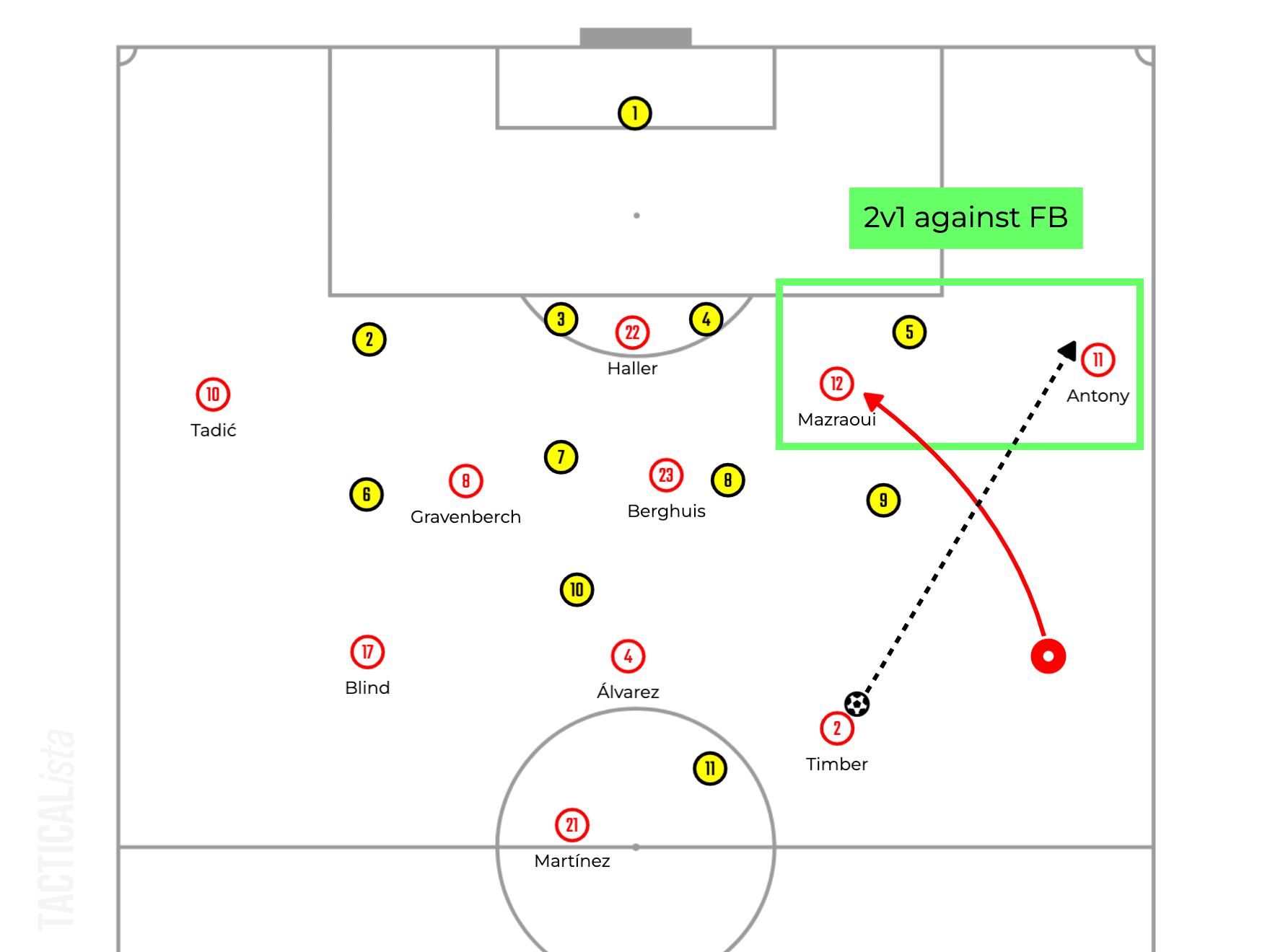 Penetration into the PA

In this chapter, how to play into the PA is going to be analysed. The beginning of the attacking in the final 3rd often created by WGs. Then, 2nd or 3rd players support the WG and destroy the opposition defensive block. 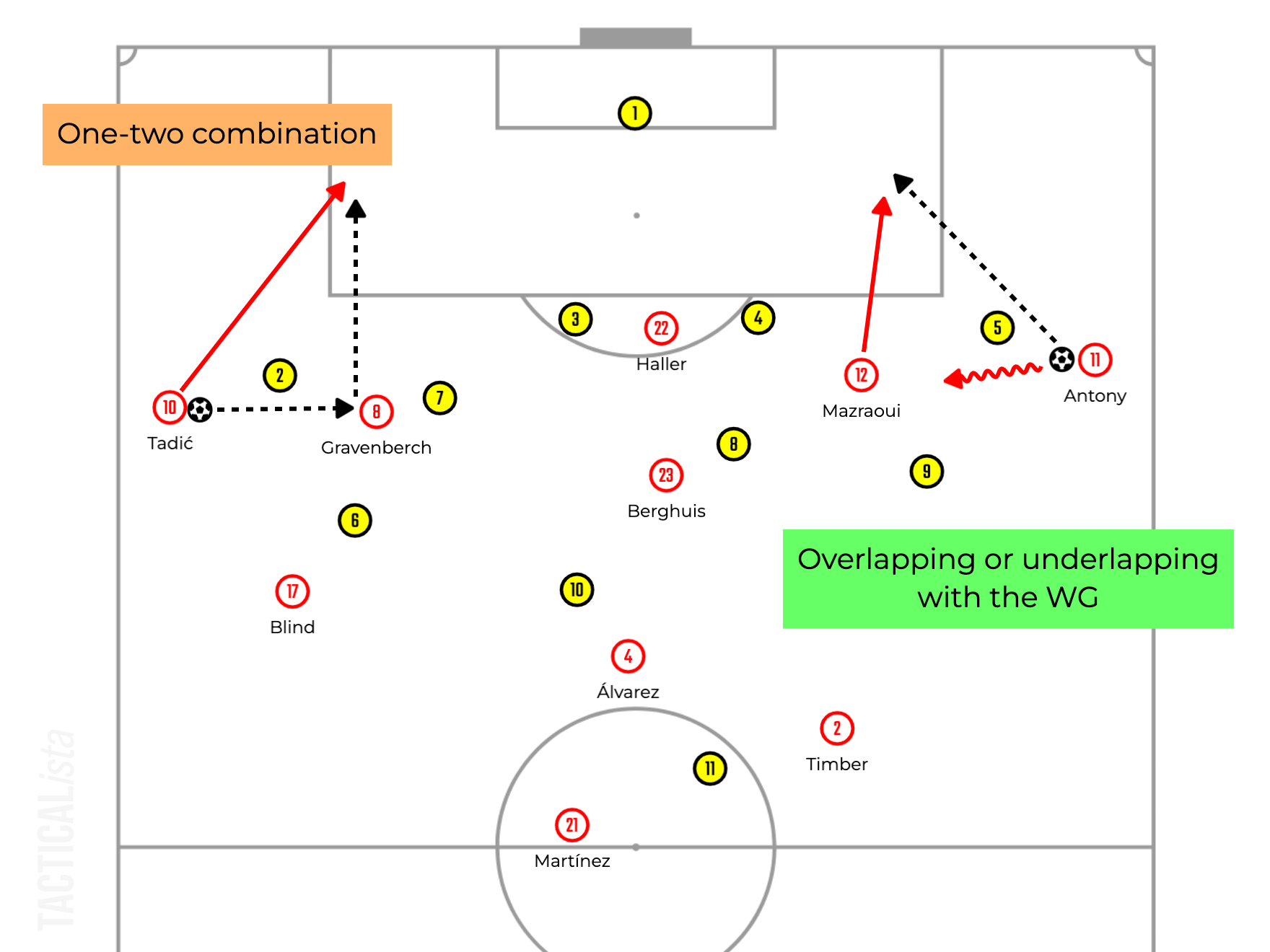 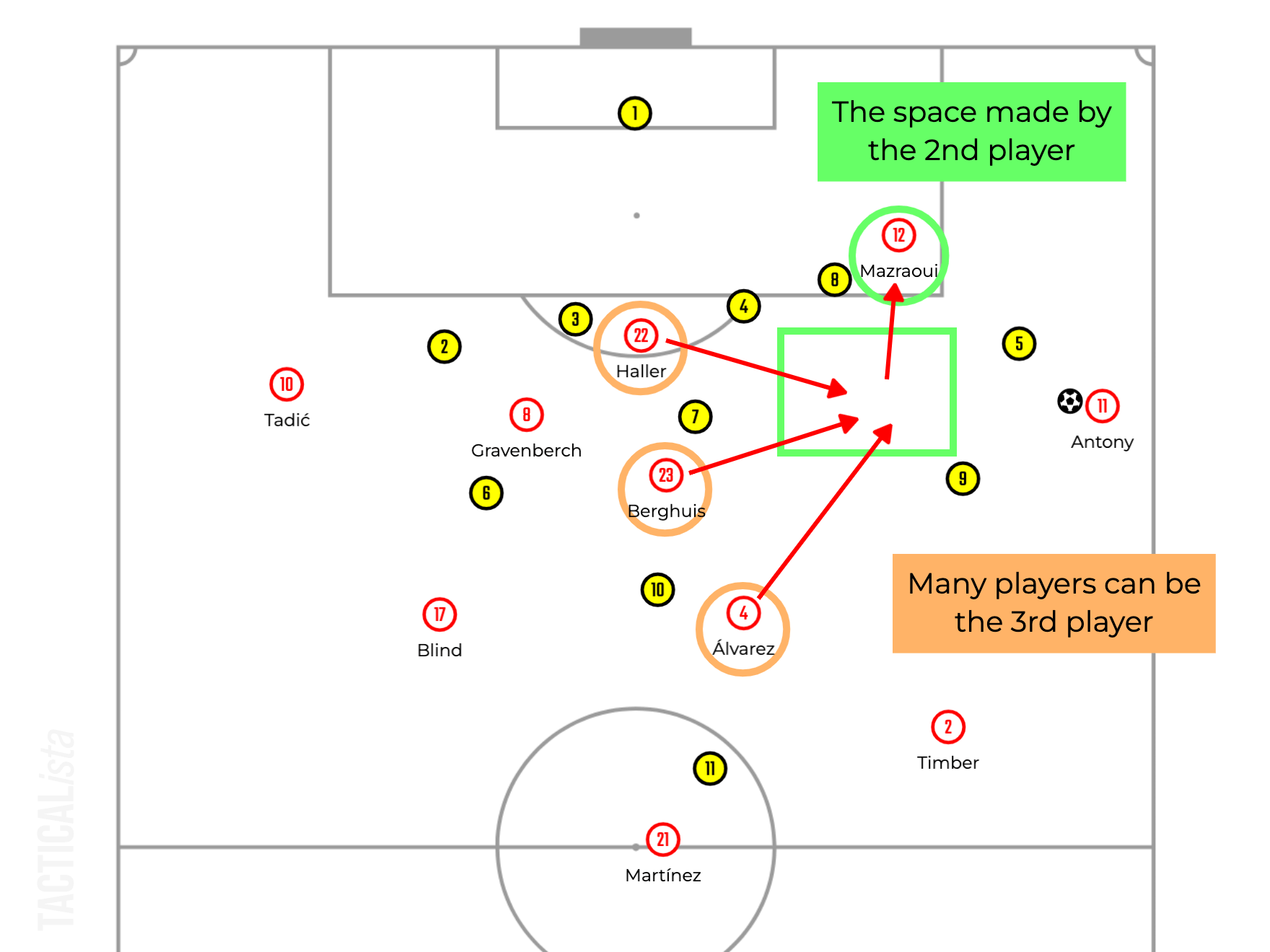 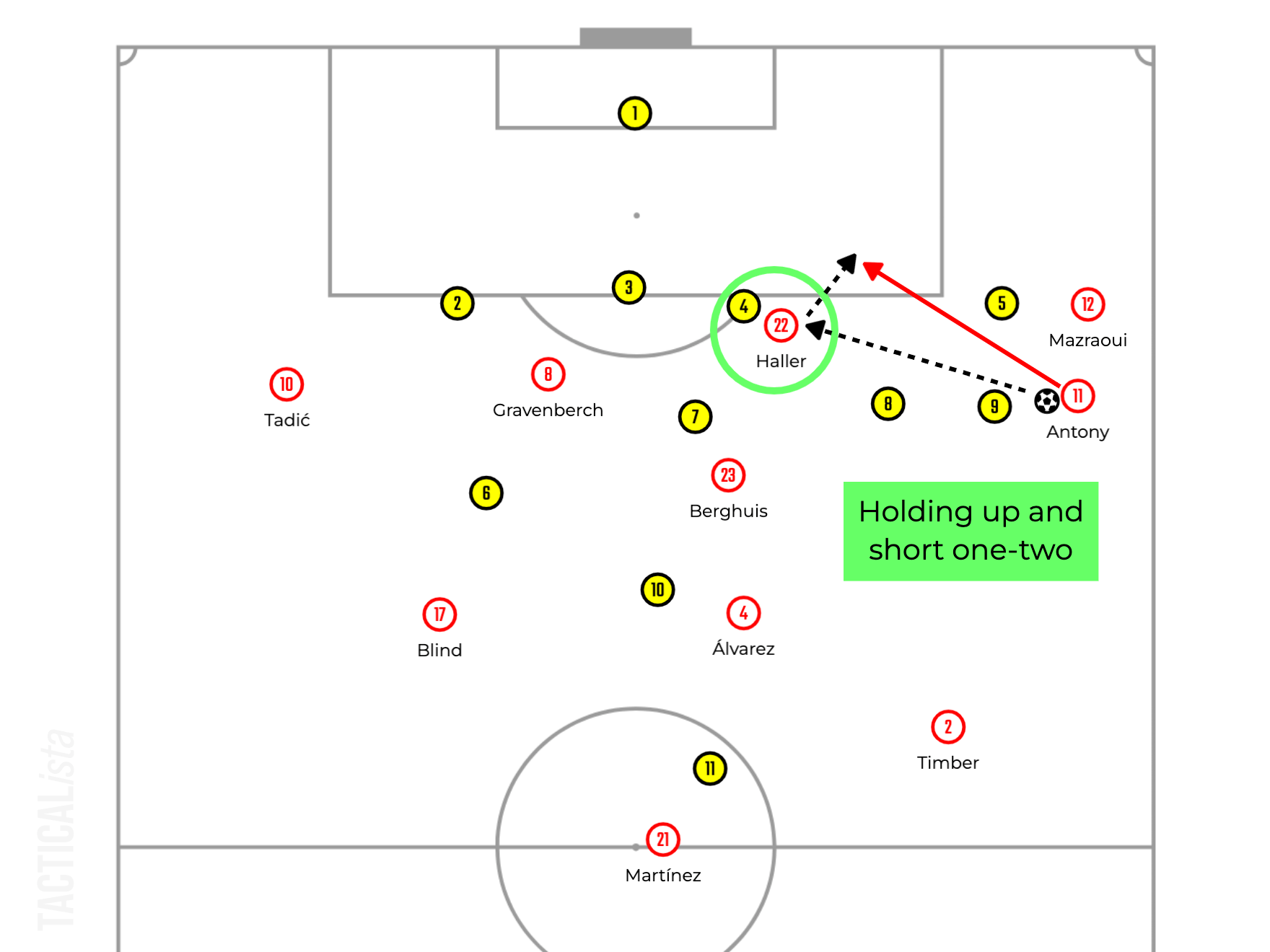 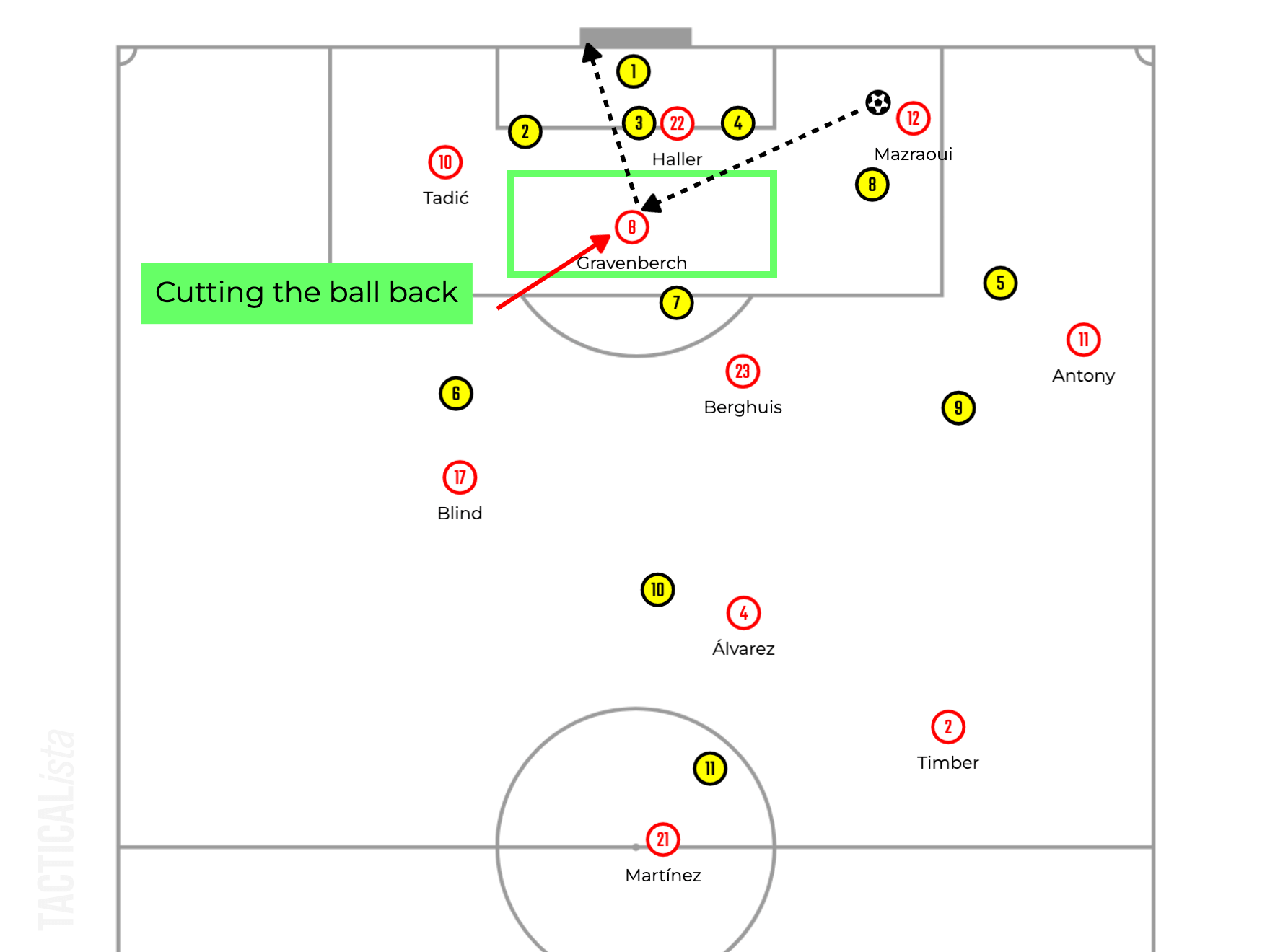 It is difficult for defenders to react the ball sent into the area behind them with running towards the own goal and there will be a huge area around the penalty spot if opposition midfield players delay dropping back. The decision of the type of delivery is simple and clear.

Crosses from Outside of the Box

Although Ajax can penetrate into the PA in many cases, it is difficult to do it when the opposition team set 10-man block in front of the goal. In this case, they are willing to deliver the ball into the PA from outside of the box thanks to Haller. He is very good at winning an aerial duel and heading the ball in. However, it is important to have another option and it is sending the ball into the back post area. 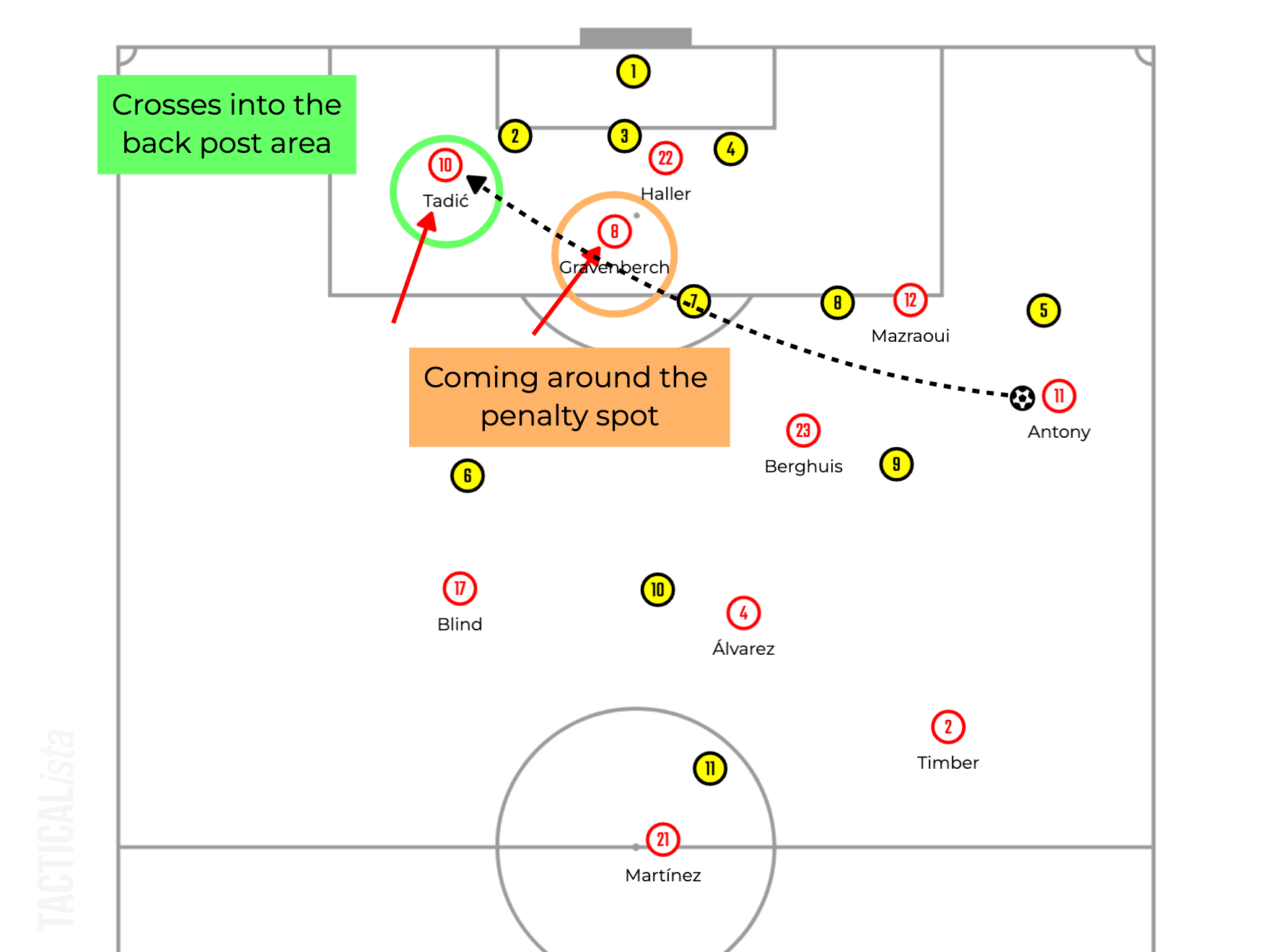 Running into the Channel 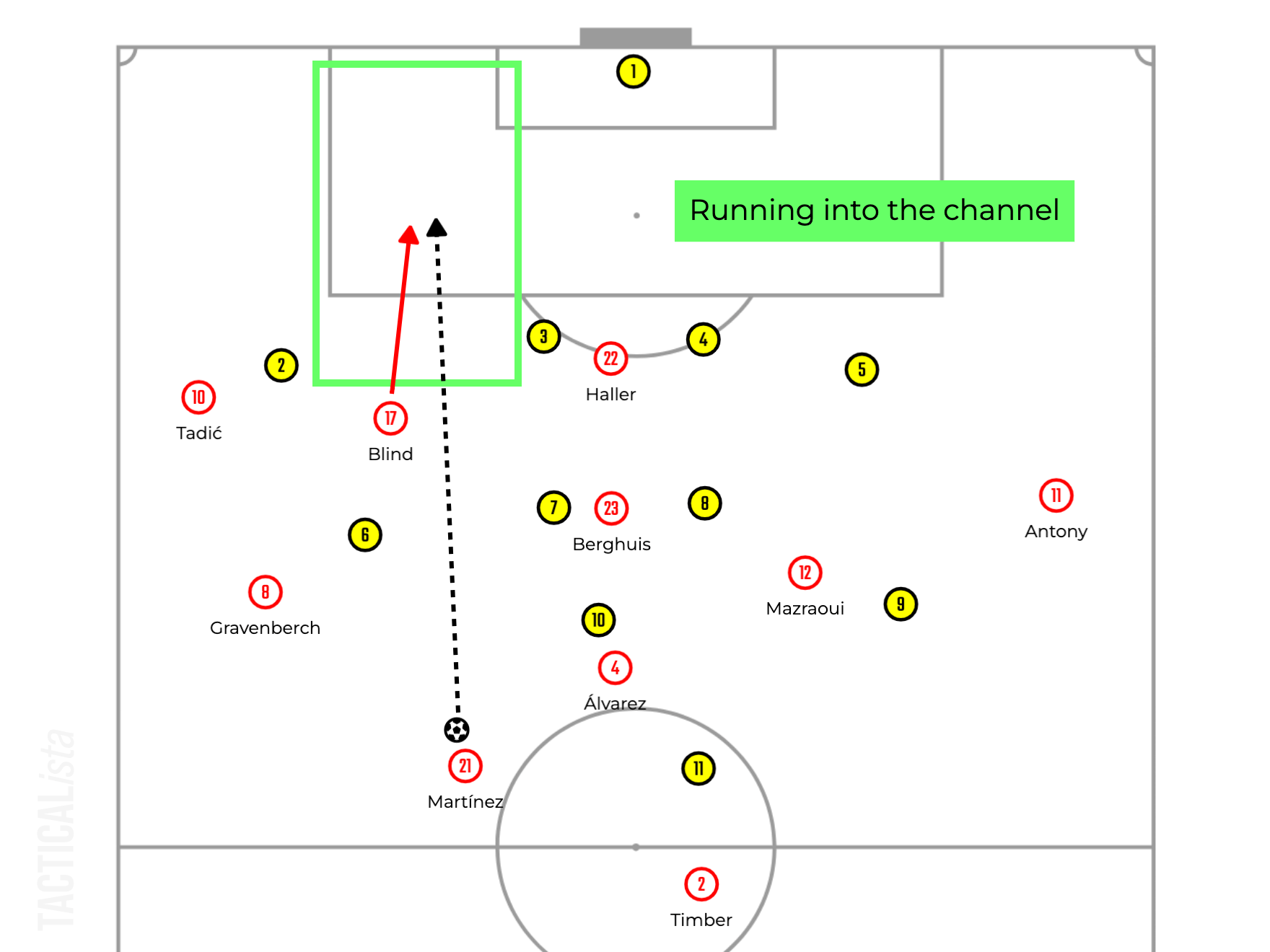 To try to run in behind and play long, it is possible to gain the depth which stretches the opposition defensive block vertically. Additionally, if the opposite FB tries to close the channel, the WG can gain time and space.

The most important thing here is running straight into the channel. Thanks to straight running, it makes difficult for the opposition CB and FB to react the ball because if the player in the pocket runs diagonally towards the opposition CB, he can clear the ball and vice versa.

Additionally, this movement can be seen in the box. The player receives the ball just between the opposition CB and FB and breaks the channel by first control. This enables the player in the pocket to receive the ball onside and gain the space to shoot. 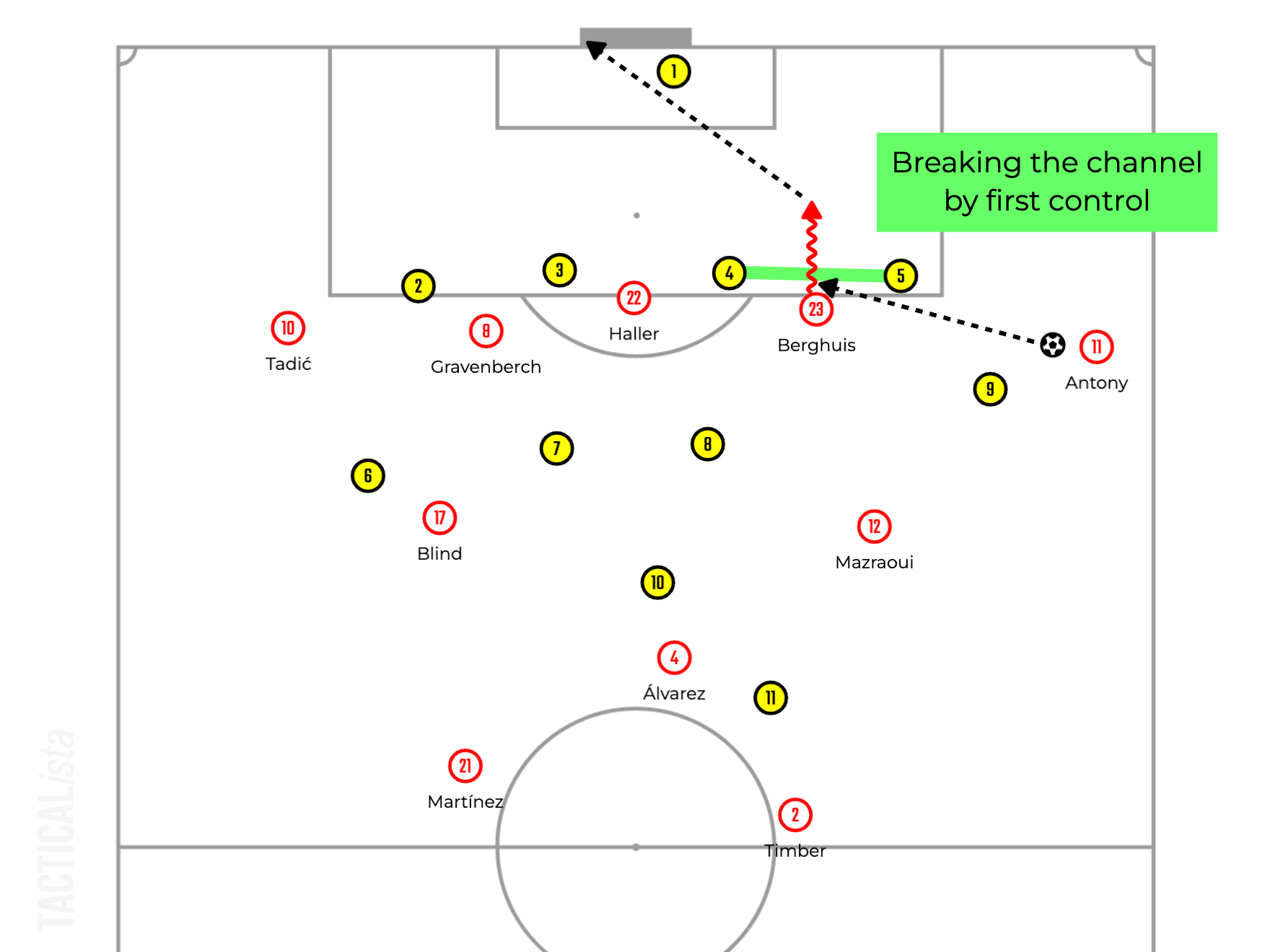 The beautiful Ajax style has weakness of defending counterattacks. Especially, both FBs going higher and many players, including the pivot, changing their position dynamically makes it unstable when they lose the ball. Basically, all of them react quickly and try to regain the ball as soon as possible but if it fails, the 2 CBs will be exposed. However, this risk-taking makes Ajax’s attacking unstoppable and beautiful. If you do not take a risk, you can gain nothing.