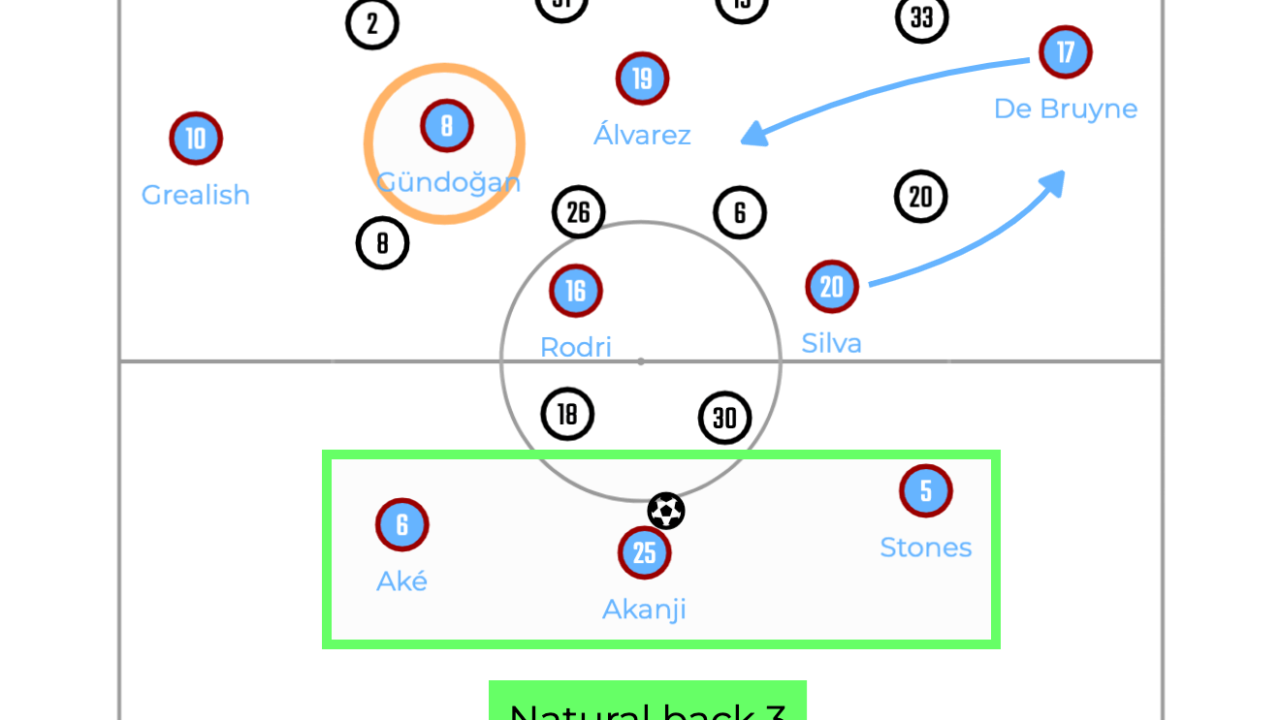 Despite the fact that João Cancelo was sent off after 26 minutes from the kick off, Manchester City dominated the game, at least in terms of the possession with 71%. Obviously, there is an advantage of the quality of players for City. However, it has to be beneficial to analyse how they hide the disadvantage of the number of players by maximising the advantages of the quality of players and more importantly, the positions of players. Therefore, in this article, how Pep reacted the difficult situation after Fulham’s equaliser and changed the tactics at the half time is going to be analysed.

Initial Reaction for Cancelo Sent off

After Fulham scored from the penalty, which was given by Cancelo, how to replace his place was the first problem. As Jack Grealish or Bernardo Silva do not play as wingbacks, playing with a back three should have not been considered. Hopefully, Nathan Aké sometimes play as the left fullback so replacing Cancelo with him and Rodri being the centre back did work smoothly. However, due to losing the pivot, both attacking midfielders, İlkay Gündoğan and Kevin De Bruyne would have been defensive midfielders. In terms of playing with two defensive midfielders, as it often happened at the end of last season, Silva is very good at doing that position. Consequently, the two defensive midfielders were played by Gündoğan and SIlva while De Bruyne moving to the right winger.

The first key thing is how to keep the possession. Obviously, Fulham keeping focusing on maintain the compact block in the midfield helped City still have the ball but the structure against visiter’s two strikers was also important. Before Cancelo was sent off, City mainly built up with back three except Cancelo who stepped up next to Rodri to be a second pivot and two defensive midfielders which consisted of Cancelo and Rodri. However, it became back four with double pivots which means City increased the number of players in front of the opposition midfield line from five players to six players. 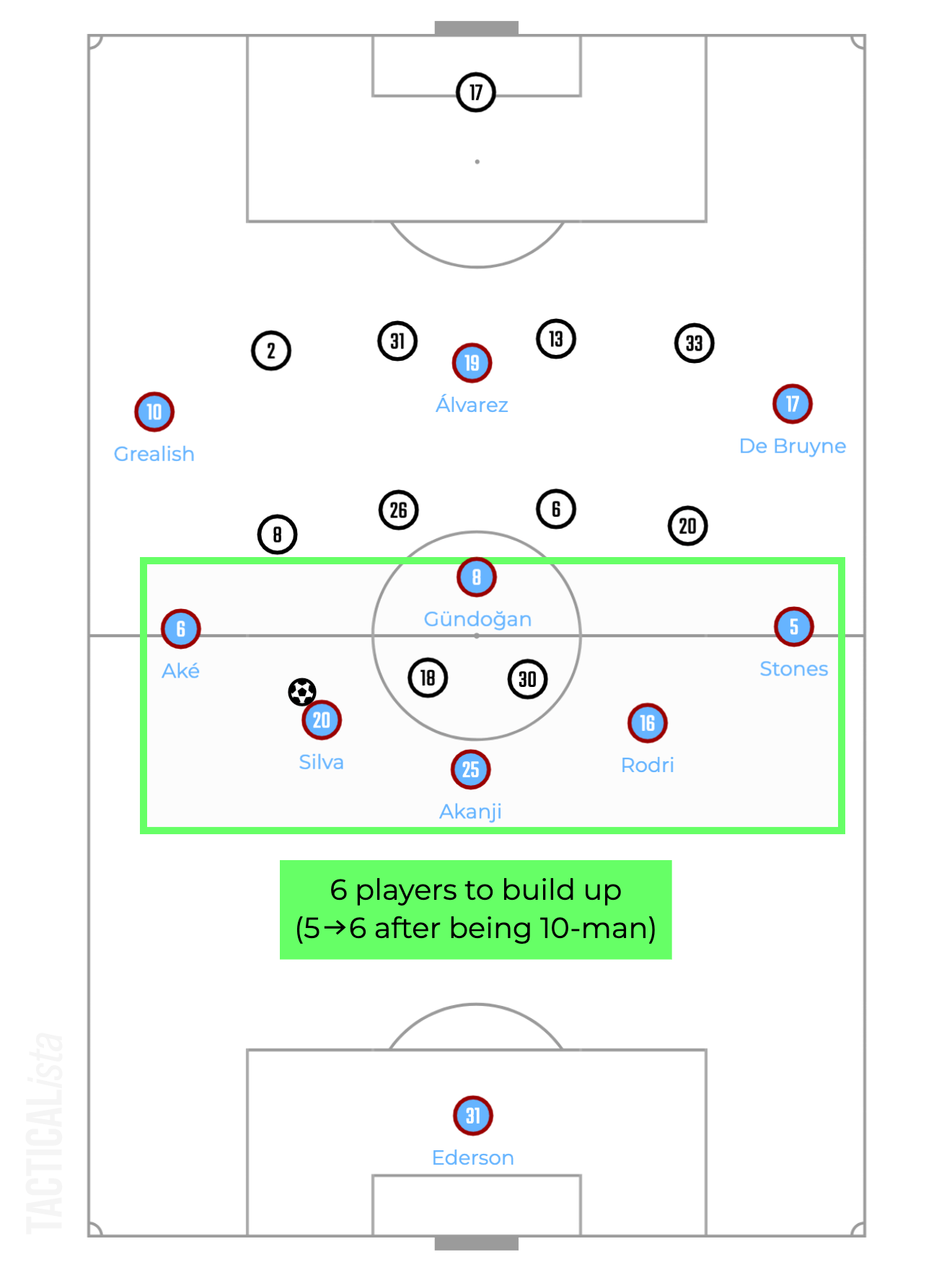 It sounds strange but it is just a static explanation. The increase of the number of players for building up means an extra player can step up to join the front. For example, if the ball was playing in the left side, Aké could step up in between the lines and if it was in the right side, Stones could move forward on the flank. 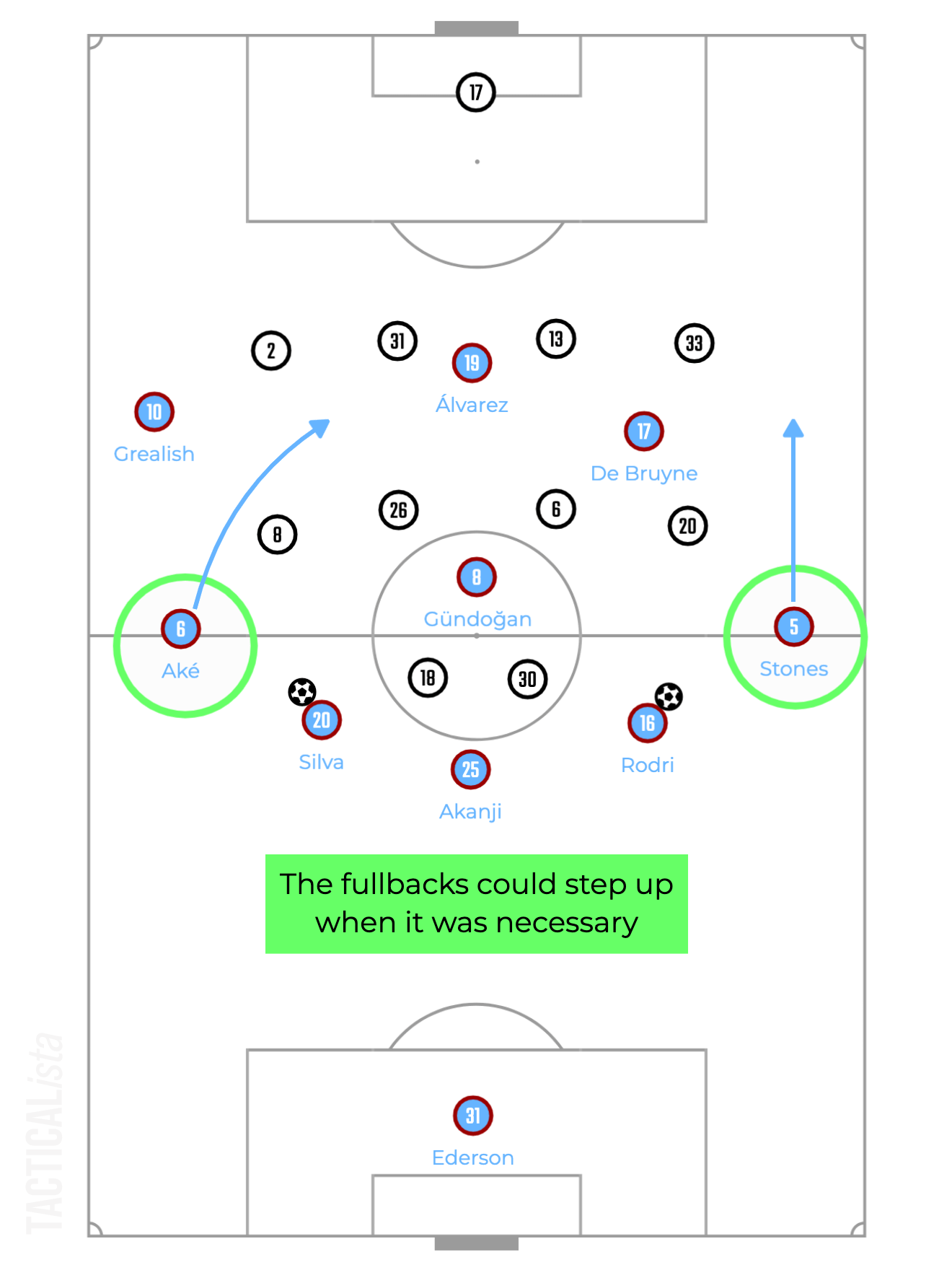 The reason of this is that it was impossible to fill all spaces where someone was in the usual way. Before Cancelo was sent off, all five lanes were filled by three attackers and two attacking midfielders. However, if they kept positioning five players in between the lines, they would be forced to build up with four players and it could be a risk. Therefore, they had to be flexible to make a same situation around the ball as usual.

However, there were some problems. Firstly, when the ball was played to Grealish, Aké could support him as a second man but Gündoğan or Silva was too far to offer another passing lane as a third man. Before being 10-man, Gündoğan could position himself in between lines and offer Grealish and Cancelo made a third man support. However, both of them had to keep the structure at the back so it lacked a player to break down the left side.

Additionally, another reason which made it easier for Fulham to defend the City’s left side was the absence of the right winger. It became De Bruyne’s job to play as a right winger but he often positioned himself in the central area because it is his main area to play. Usually, there is a right winger to get the attention of the opposition’s left fullback. Thus, the opposition back line cannot shuffle over enough and there is a gap between the defenders. However, even if De Bruyne came inside, Stones could not move up to be a right winger in order to maintain five players at the back. Consequently, the opposition back line could shuffle over to City’s left side enough to maintain the compactness of the defensive block. 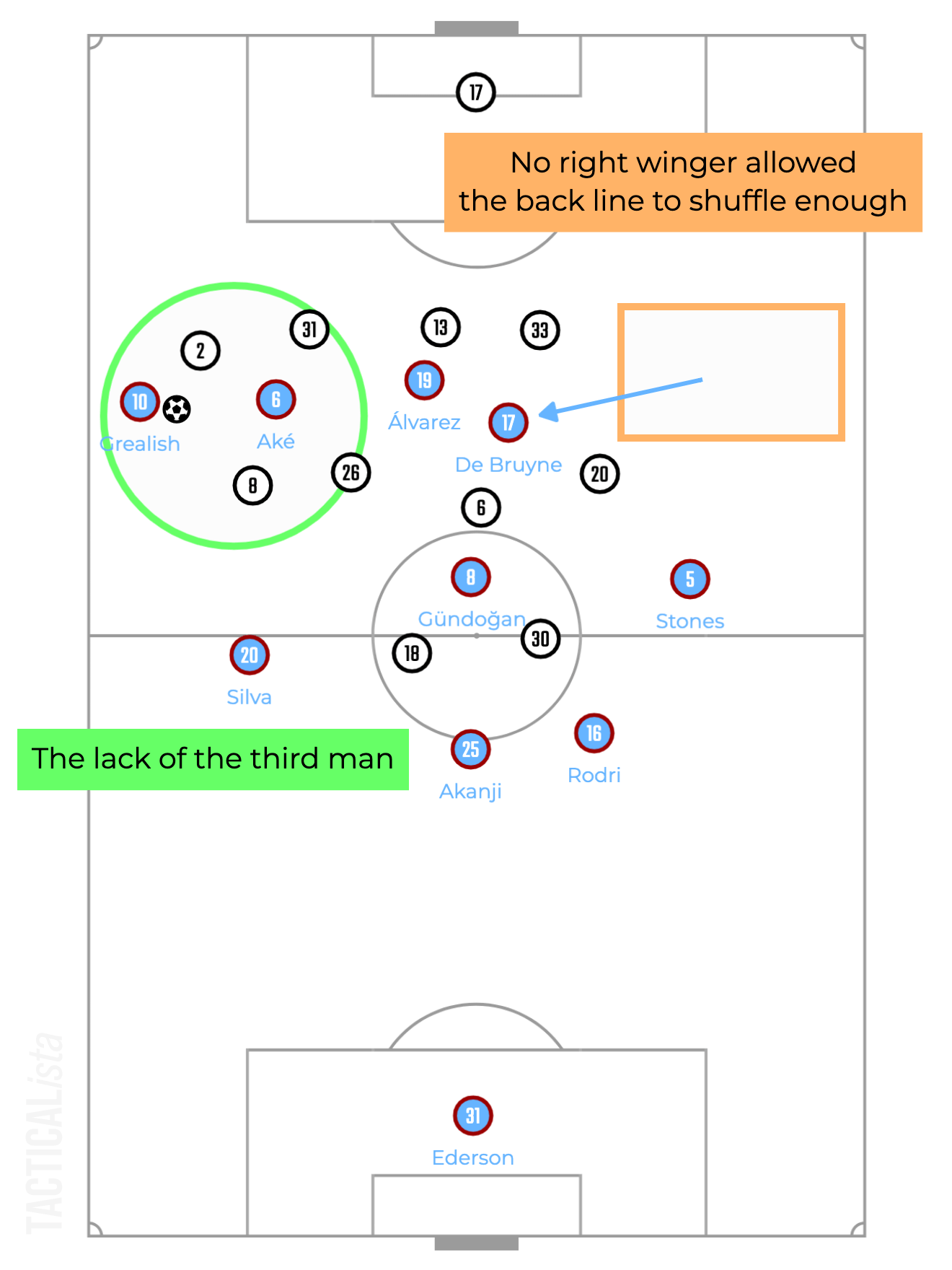 Overall, it was successfully adapted to being 10-man in terms of maintaining the possession and hopefully they could return the dressing room without conceding another one.

It is a great opportunity to change something during the half time. As it was expected, Pep slightly changed positions of some players to make things better.

The tactical change was how to let players play in their favourable area. They started to build up with the back three with natural centre backs and Rodri and Bernardo became the double pivots. This allowed Gündoğan to play in between the lines and it is obvious that he can play better in the higher area than Aké. Additionally, Pep encouraged De Bruyne and Bernardo to move wherever they want. Consequently, De Bruyne sometimes drifted to the left side and Silva filled the position of the right winger. This gave City some randomness to cover the lack of the players up front. Additionally, the right wide area was consistently filled by someone which made it harder for Fulham’s back line to shuffle across enough. 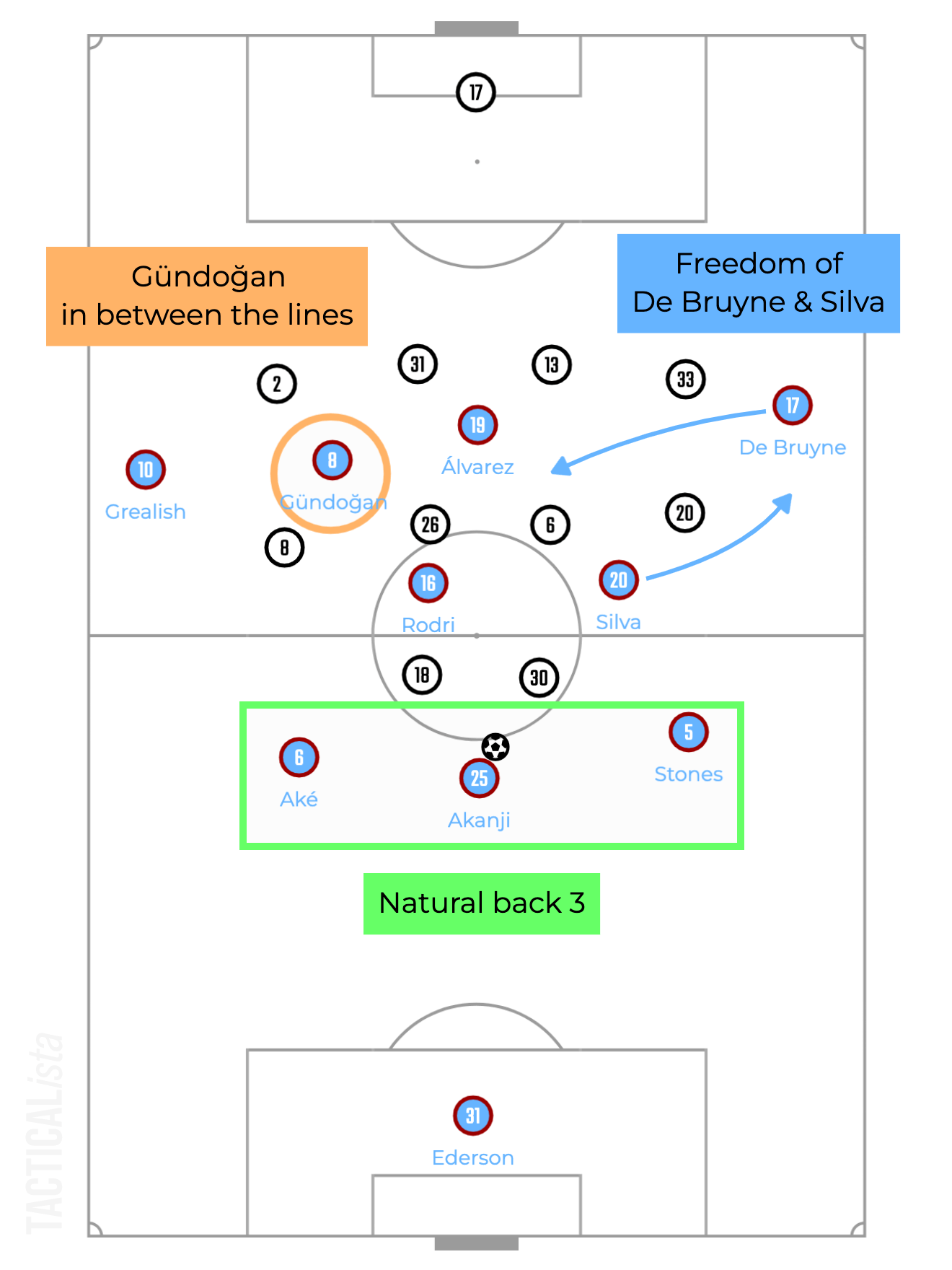 These tactical changes made 10-man City looked like playing as usual but it should be mentioned that Fulham made some great opportunity to score. They had some counterattacks but they lacked the ability in the final third and wasted chances. Additionally, Fulham did not play from the back against the pressing by City. Sometimes they could beat City’s pressing but overall, they did not have a clear plan to play with the ball.

In conclusion, Pep managed to adapt to being 10-man after 26 minutes from the kick off. They became more flexible to fill the blank of a player before the half time and changed the position of some players at the back to let all players play in their comfortable area. It was great game to learn how to play after being 10-man but the quality of teams should be considered. Obviously, City had lots of brilliant players and Fulham lacked the quality of players and plans to play with the ball. Thanks for reading.