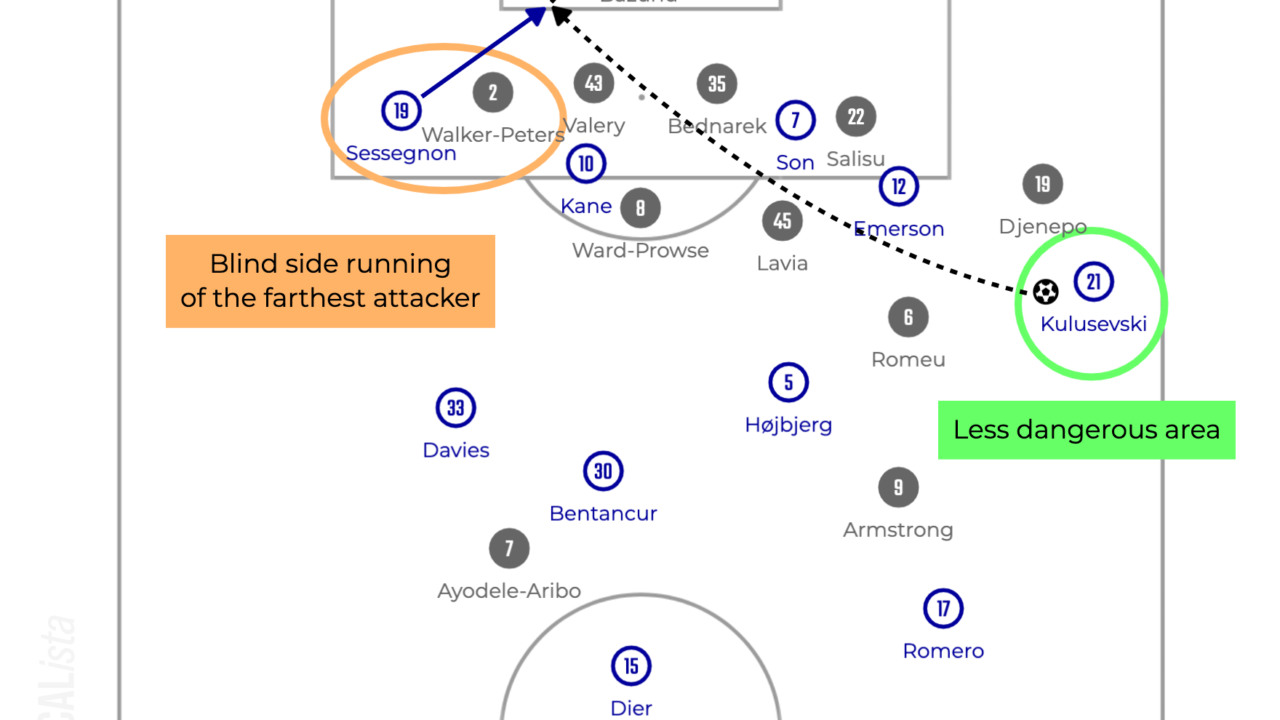 In this article, I’m going to analyse the game of Tottenham Hotspur against Southampton and discuss about how to score goals against the low block which perfectly closes the space in the box. Spurs could score four goals against Saints but only one of them was the goal against Saints’ low block and that was really good example. Kulusevski delivered the in-swinging cross from outside of the box and the opposite side wingback Sessegnon put it in the net. But why this is the best example of the goal against the low block and it is difficult to defend even though lots of defenders are in the box? Before discussing about this, how Spurs tried to break down the Saints’ 5-3-2 defensive block is going to be analysed.

How to Progress the Ball?

Then, Saints hardly pressed high or it was not well organised as a team, Spurs could have the possession in midfield. Additionally, against two strikers, Spurs had three at the back which means there is always a spare player. It is usually a side centre back and his job is stepping in and creating another overload in a deeper area. 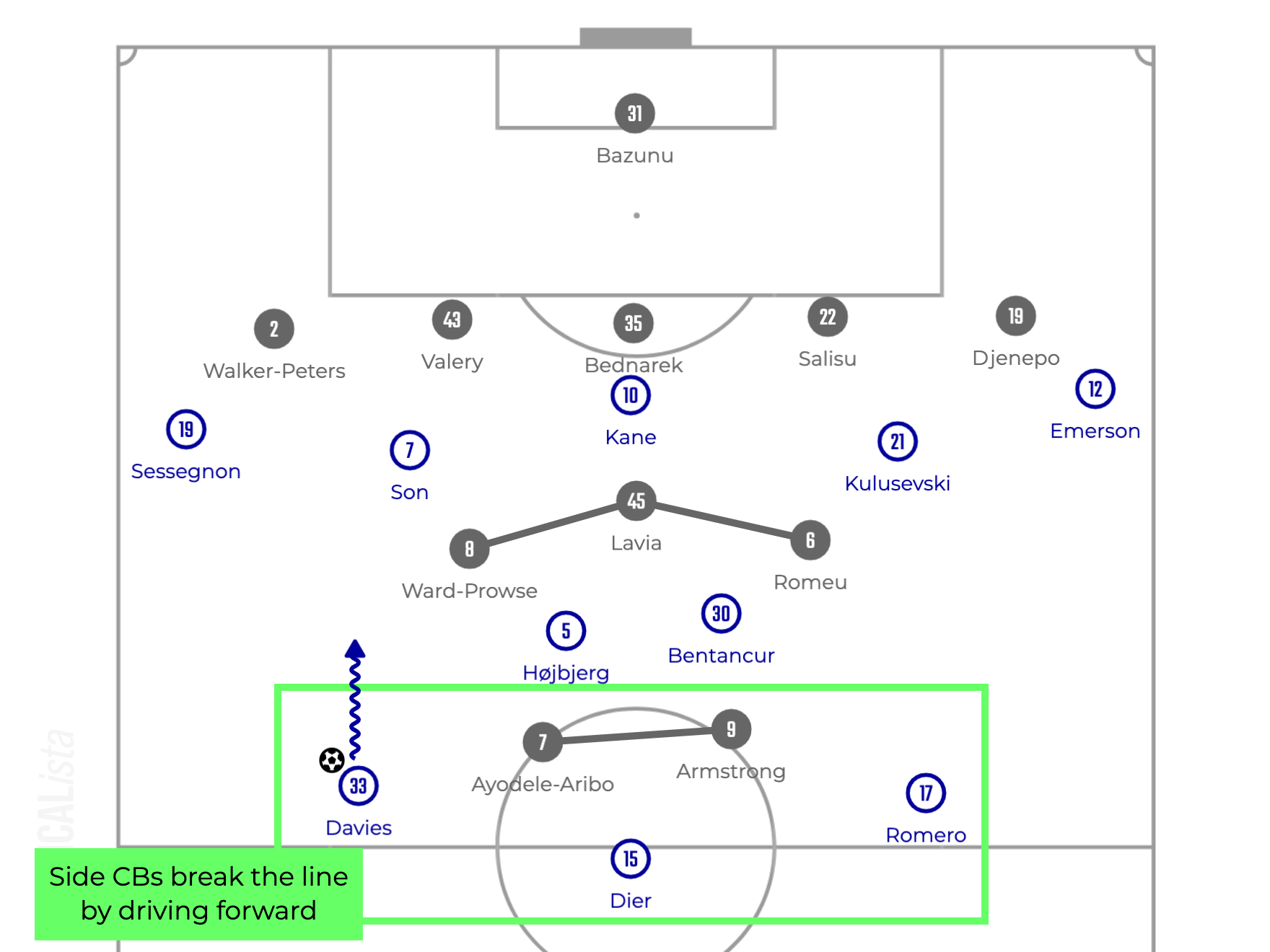 Both centre backs Davies and Romero can drive and break the first line but Romero was pressed by Romeu earlier so he often played to Kulusevski or Emerson which are going to be analysed in the next chapter.

By stepping into the next phase, it is possible to drag the opposition midfield player out of his position. It makes the gap between the lines bigger and exposes the opposition defenders. However, there was a difference between left and right side especially because of second strikers.

The difference between Son and Kulusevski

To make another overload was one of the main objectives of centre backs stepping in and breaking the first line. However, the positioning of players who receives the ball is also important. If Spurs’ attackers receive the ball in their original position, they would be marked by Saints’ defenders because they have five at the back, which enables them to focus on each attacker. Therefore, they need to move away from their marker to gain time and space. In terms of this, Kulusevski was better than Son in this game. 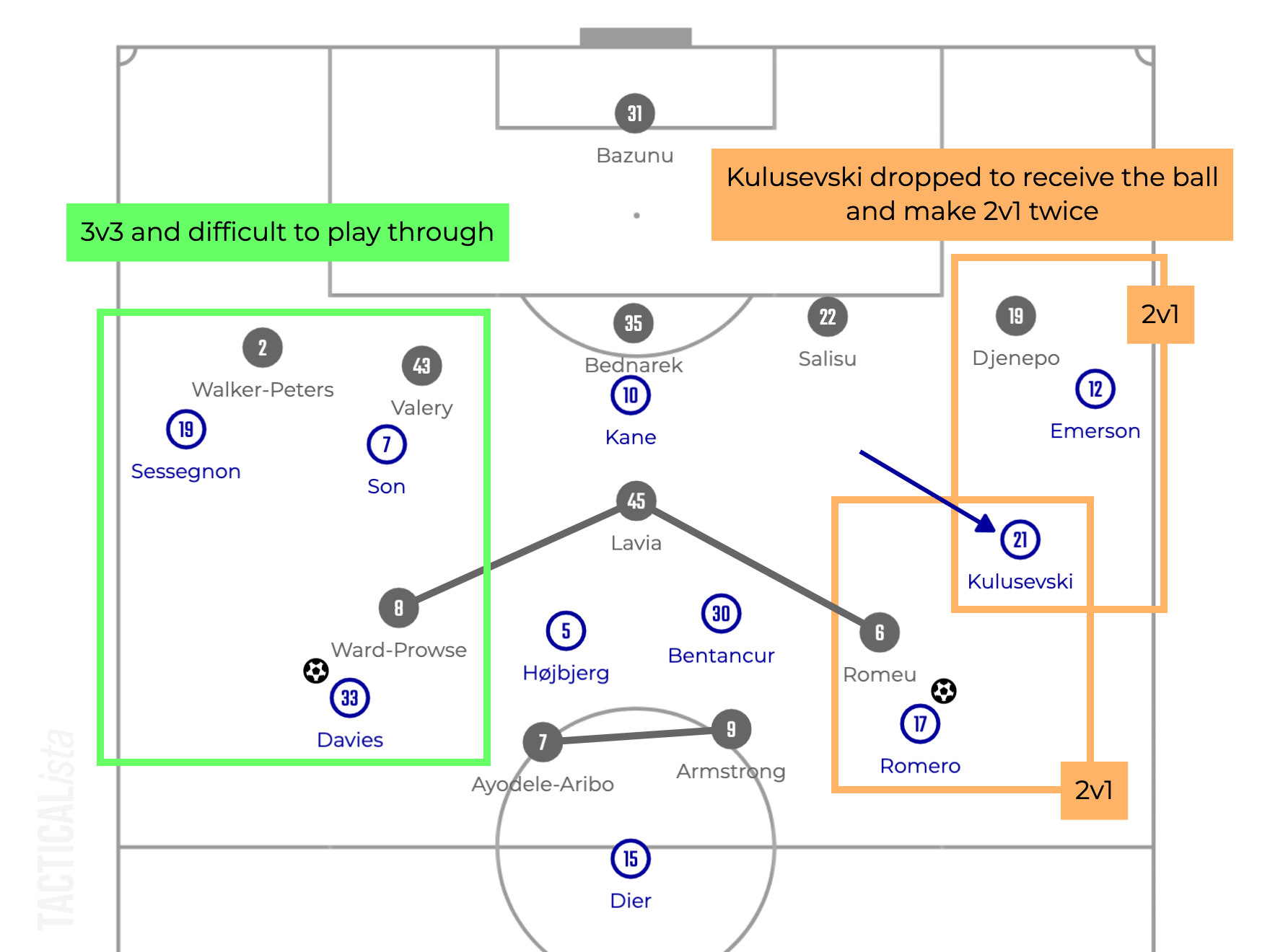 Son often stayed in his position so even if Davies could progress the ball, there was 3v3 situation, although, of course, it’s much better than being numerical disadvantage like 2v3. On the other hand, Kulusevski often drifted wide to lose his marker Salisu. As I mentioned before, Saints’ left midfielder Romeu jumped to press Romeo and vacated the space behind him where Kulusevski could receive the ball. Thanks to this movement, Spurs could create 2v1 against Romeu and after Kulusevski receives the ball the 2v1 would be against the left wing back Djenepo with Emerson. This makes it easier for Spurs to attack from the right-hand side.

The Final Method of Scoring Goals

That goal was just beautiful and the final way of scoring goals if the opposition can defend almost perfectly. If it is impossible to penetrate into the box, a lot of teams usually deliver simple crosses and hope something happens there. But we need to be detail and find the best way to score goals by crosses from the touch line. And the first goal from Sessegnon was the textbook of this. 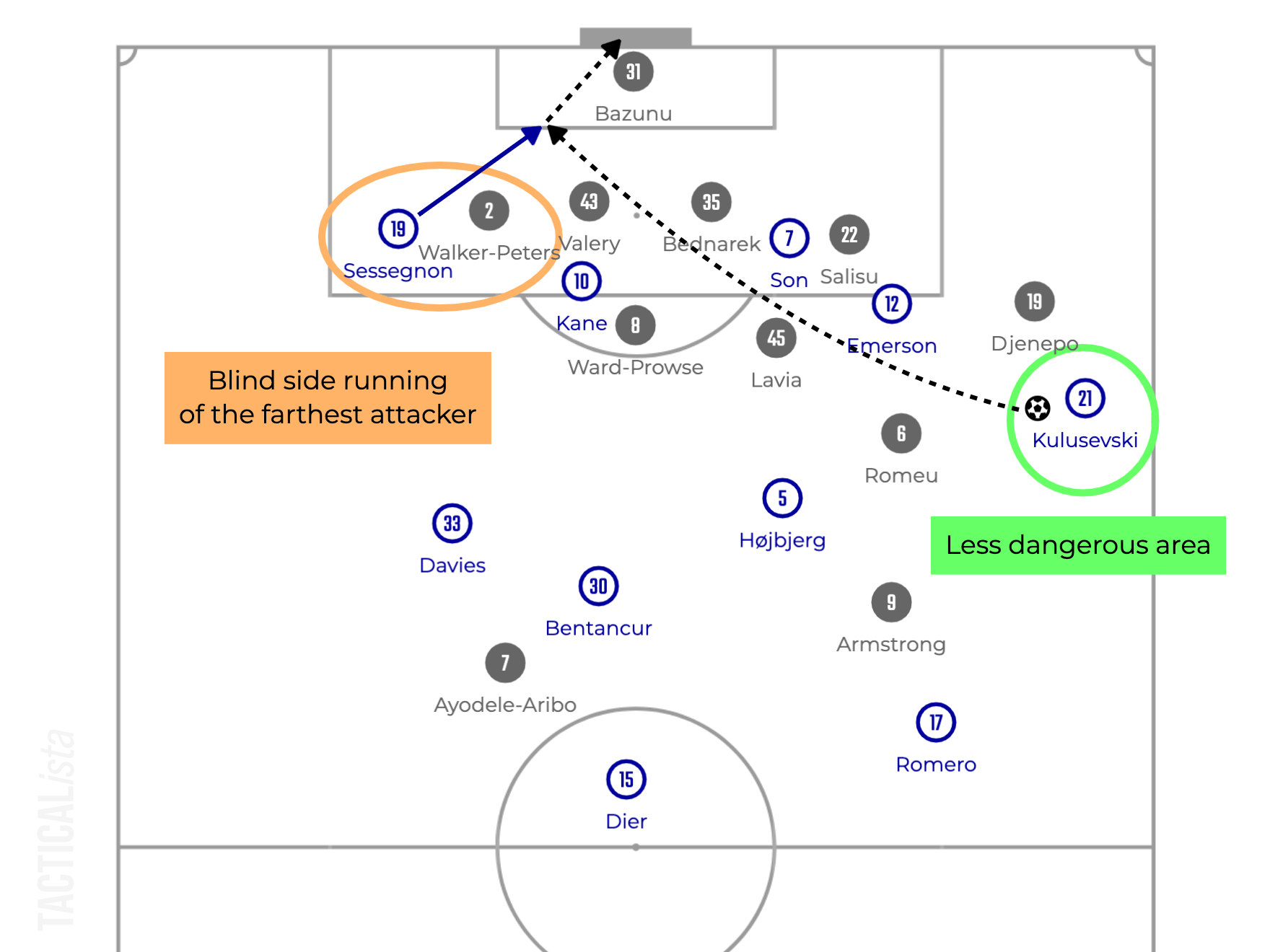 This is what happened there. Usually, if the opposition team focus on defending in front of the goal, the position where Kulusevski delivered the cross is often regarded as less dangerous area and the pressure is also less intense. Therefore, it is a good idea to position someone who can deliver great crosses in this area. Of course, however, it requires players who have great accuracy of crosses such as Alexander-Arnold, Robertson, De Bruyne or Cancelo and now, Kulusevski joined here.

Another important thing is the movement of the player who will take a shot. As Sessegnon did, the player should position himself outside of the marker, which enables him to start moving from the blind side of the opposition player. This is another reason why the ball should be delivered into the back post area.