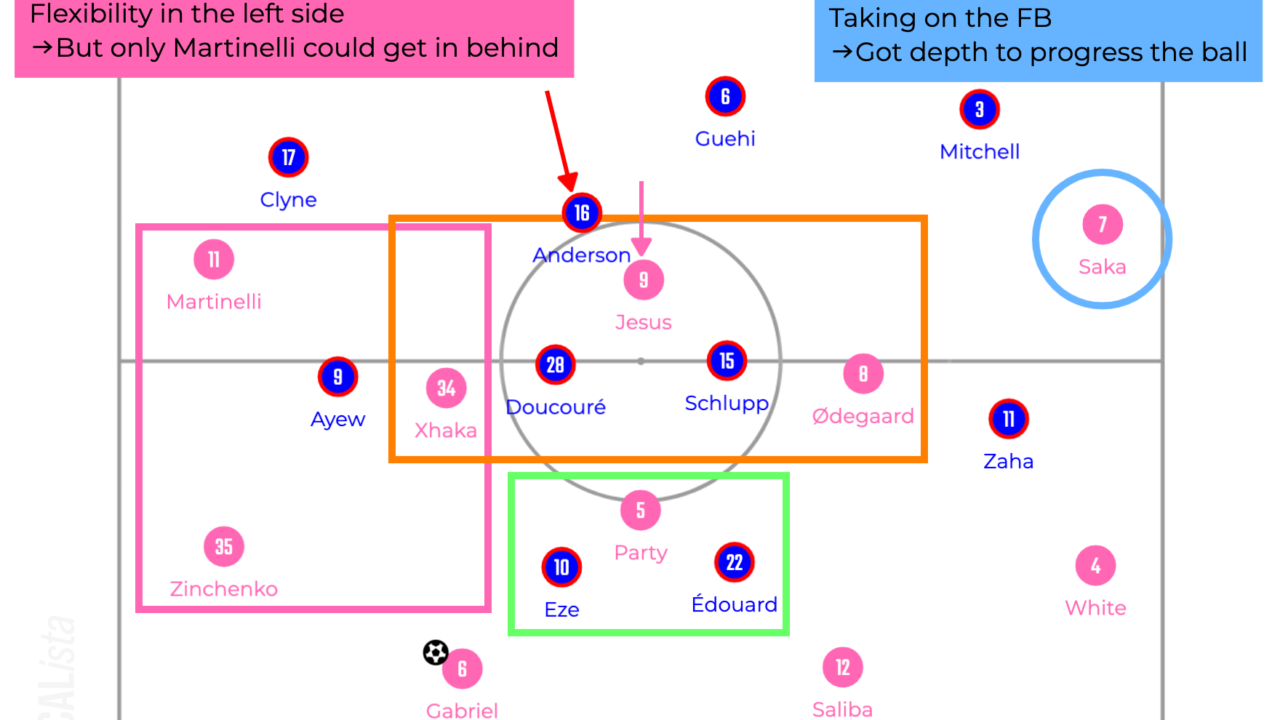 In this article, I’m going to analyse the game of Crystal Palace against Arsenal in Premier League and discuss about the aim of possession. Arsenal could score from the planned corner kick and it made the game easier for them, but they struggled with playing through the defence line of the home team. It might be due to the solid defending but there was a space where Arsenal could have exploited easily and having failed to do this was one of the reasons why Arsenal couldn’t find another goal quickly. Then, let’s move on to the analysis of the game.

Arsenal, who want to dominate the ball, tried to apply pressure to the opposition goalkeeper as expected. The aim of this pressing is mainly forcing them to play difficult passes and recovering them to keep playing in Crystal Palace half. To let the opposition players make mistakes, the most important thing is pressing on the player on the ball quickly before he finds an option. Therefore, Arsenal need to decide who will press to each Palace player. 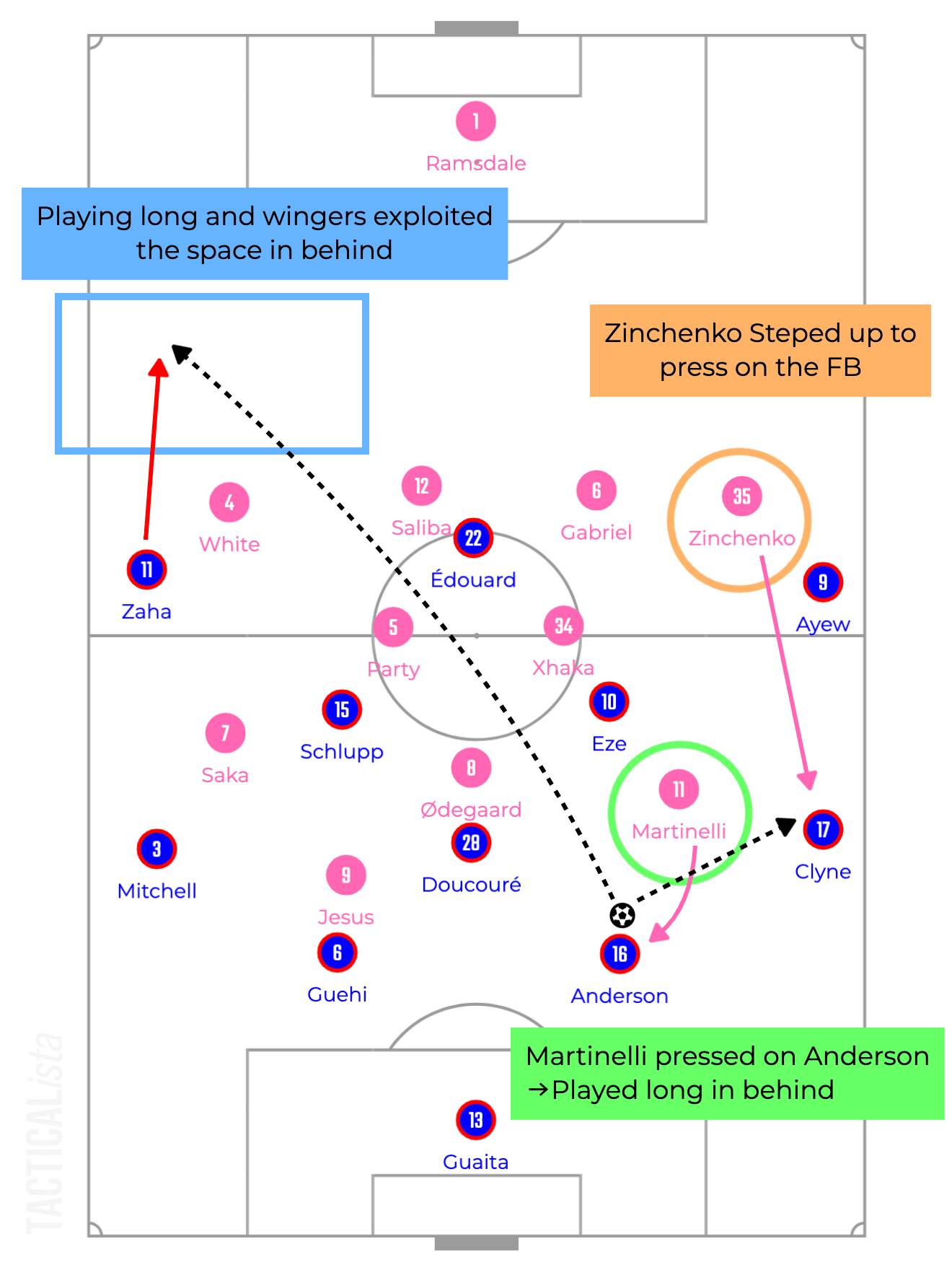 Jesus and Ødegaard mainly pressed to Palace centre backs and Doucouré but of course Arsenal needed one more player to join this area. The left winger Martinelli often apply pressure to the right centre back Anderson with cutting the passing lane to the right fullback Clyne. This enabled Arsenal to press to the player more intensely and force them to make a decision quickly. Of course, Martinelli pressing to the centre back means Palace right fullback Clyne is unmarked. Therefore, Zinchenko stepped up to him and Arsenal kept pressing to each player. It makes Arsenal back three but the right back White is a naturally centre back so there was no problem to be back three and this is the reason why Martinelli was the player to step up and press the centre back.

To force Palace to play quickly and make mistakes was the plan of Arsenal but the centre backs, especially Anderson, didn’t need time to think because he had only one option, which is playing to wingers. This was the main option for Palace to progress the ball into the final third but seemed to be most effective. Zaha or Ayew could reach the ball earlier than Arsenal defenders and take on. It was great threat against Arsenal especially in second half and they delivered some crosses but couldn’t score any goals because of the solid defending of Arsenal in the final third.

Solid Defending in the Box

Arsenal was really organised in the box and didn’t give time and space for Palace. They defended in front of the goal focusing on the zone and the shape was three defenders and two midfield players. 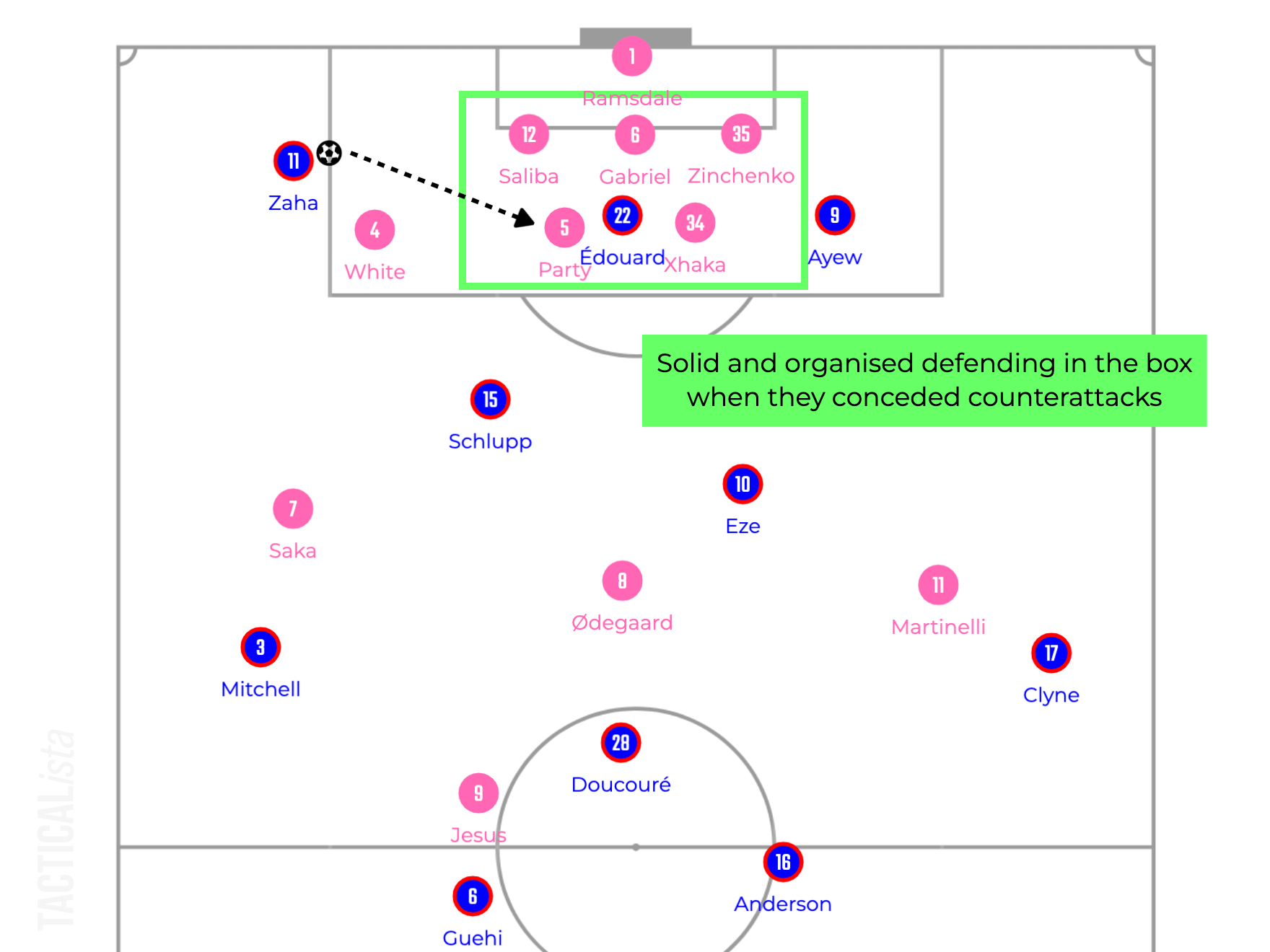 After Palace played the long ball in behind, Arsenal reacted well and come back to each position in front of the goal quickly. They can adapt counterattacks because where each player needs to come back is already decided so they don’t think every time. That’s why a lot of defenders occupied the space in the box and Zaha and Ayew couldn’t deliver many successful crosses.

What is the Aim of Possession?

Then, this is the main thing of this article. Arsenal could have exploited the space in behind more easily than actual. As it was mentioned here, to break the opposition defence line is the objective of keeping possession in midfield and this must be prioritised. However, Arsenal focused on keeping the possession between defenders and midfielders too much and struggled with breaking the opposition final line. Then, let’s take a look at the organisation in midfield. 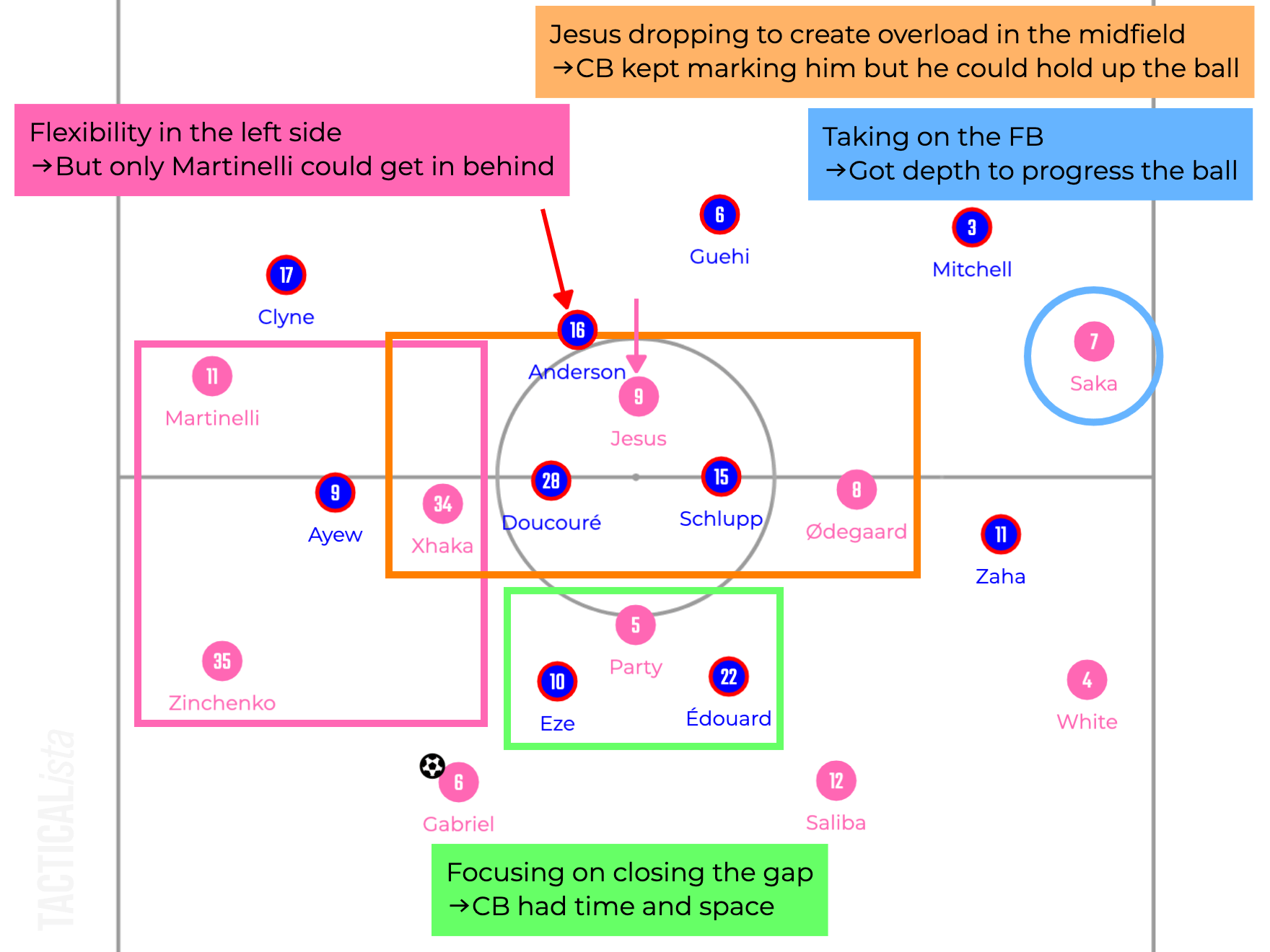 Basically, the first line of Palace focused on closing the gap and tried to prevent Party from receiving the ball so Arsenal both centre backs can have the ball without intense pressure. However, Palace kept being compact which made it difficult for Arsenal to play through. On the left side, Zinchenko, Xhaka and Martinelli were flexible and sometimes swapped each position to force Palace midfielders to make a wrong decision. It didn’t work well because they didn’t focus on the aim of possession but tried to keep possession itself. Mainly their movements were towards the own goal and no one could run in behind to break the final line. Additionally, the striker Jesus did really well by dropping and holding it up in terms of keeping possession but this movement is also backwards. Palace centre backs tended to track Jesus’s movement and Clyne also kept marking Martinelli dropping to receive the ball, so Arsenal could disturb the defence line but no one tried to run in behind to exploit the space there.

The final objective is breaking the opposition defence line so running in behind is crucial. Arsenal did really well to create a gap between the opposition defenders so if wingers or attacking midfielders can run in behind, they could score more. Thank you for reading.