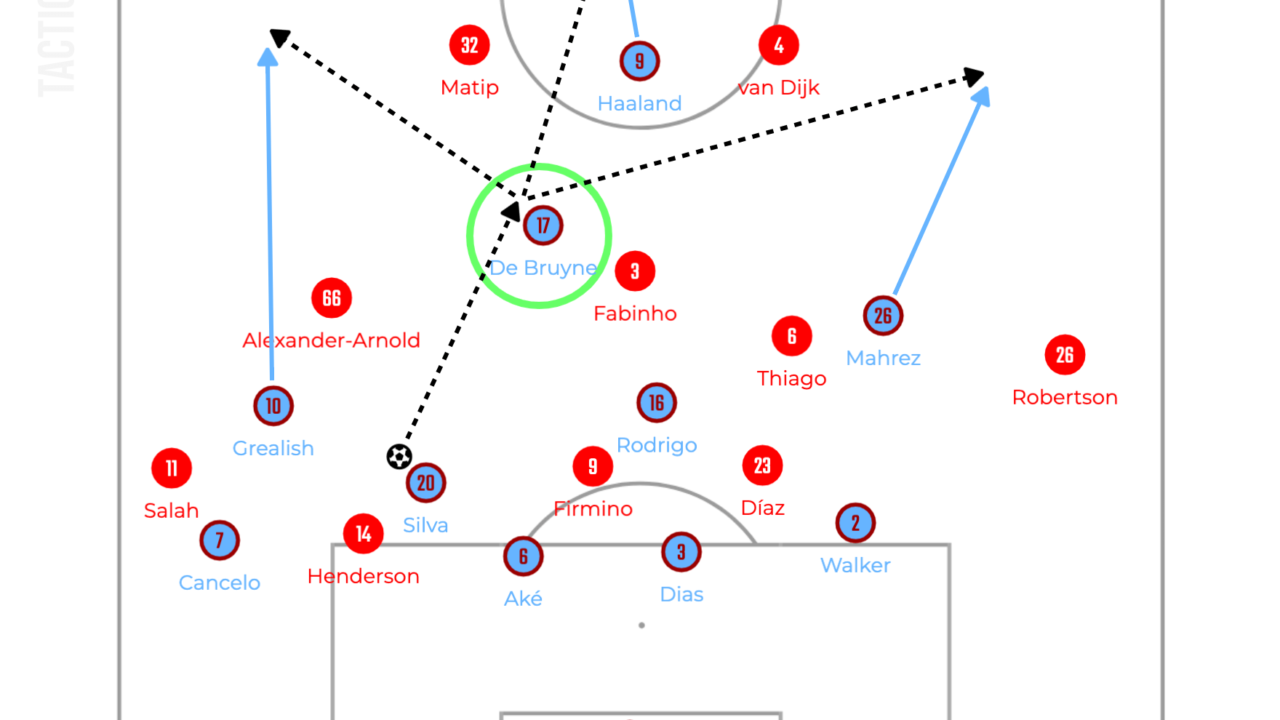 Both teams can progress the ball and apply pressure in the most effective way in the world. Generally, teams who try to progress the ball from the goalkeeper struggle with keeping possession against teams who apply pressure in the opposition half. This is because it is too difficult to keep passing by feet and there are many mistakes during passing. However, both Liverpool and Manchester City can beat the pressing on many occasions and progress the ball into the opposition final third thanks to their individual skills such as accuracy of long balls or protecting the ball under the body. In this chapter, how they press and beat it is going to be analysed.

Firstly, how Liverpool progress the ball against City’s high pressure is going to be discussed. Before analysing the route of build up, City’s pressure needs to be understood. In the first battle, City tried to press as usual and Liverpool could almost bypass it. 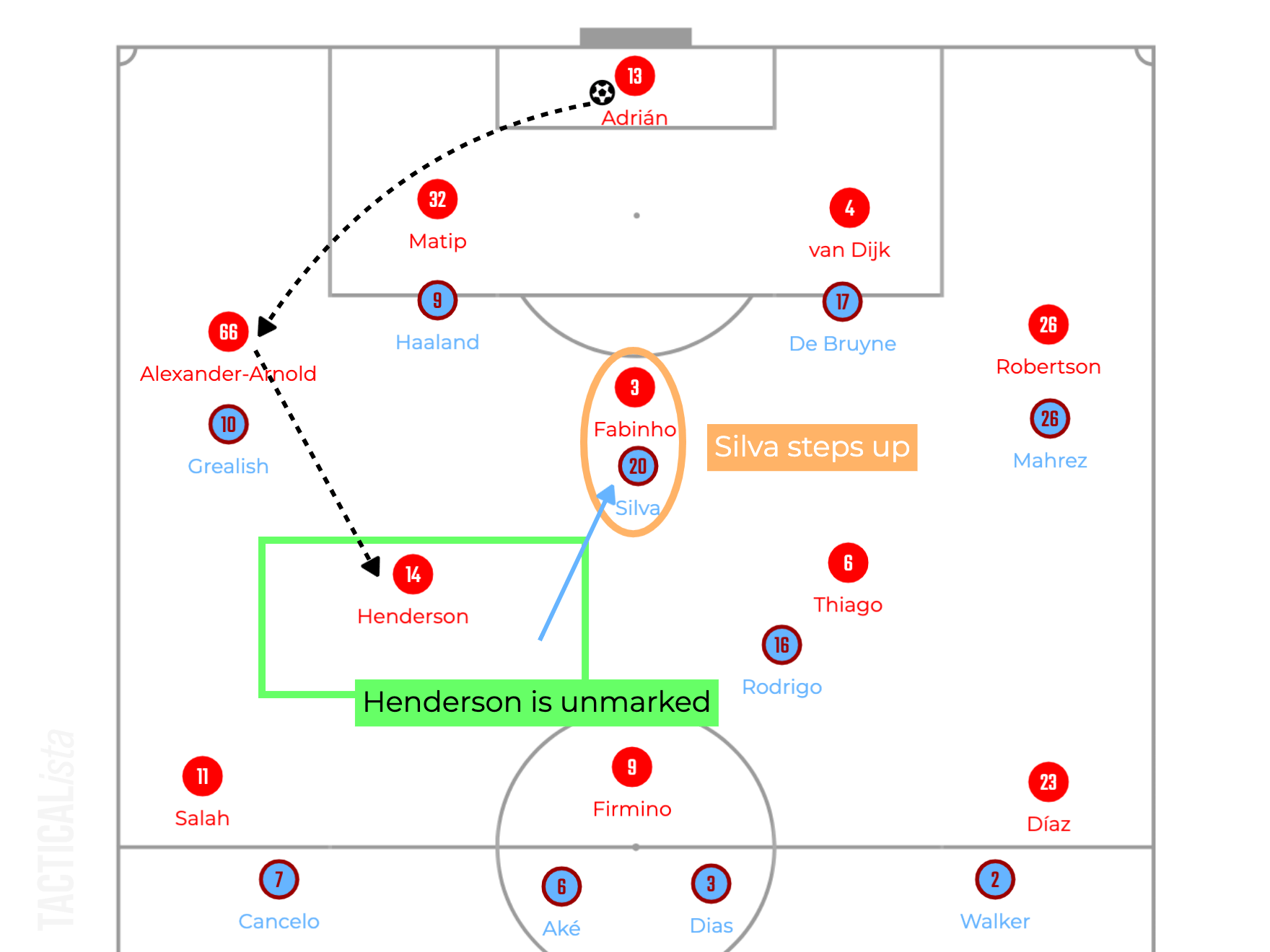 City played in a 4-4-2 but they try to mark the opposition player rather than defending space when applying pressure in the higher area of the pitch. Then, as usual, Silva stepped up to mark the opposition defensive midfielder but it left Henderson unmarked. Although this is one of the reasons why Liverpool and City can progress the ball on many occasions, Adrián found the route of playing the ball and tried to play long to Alexander-Arnold and let him head it to Henderson. Unfortunately, this time it was unsuccessful, but it could be the route of progressing the ball.

However, City was also clever enough to adapt it and they let Cancelo step up to mark Henderson and Aké moved to the left side to mark Salah, which makes it all man-marking pressing. 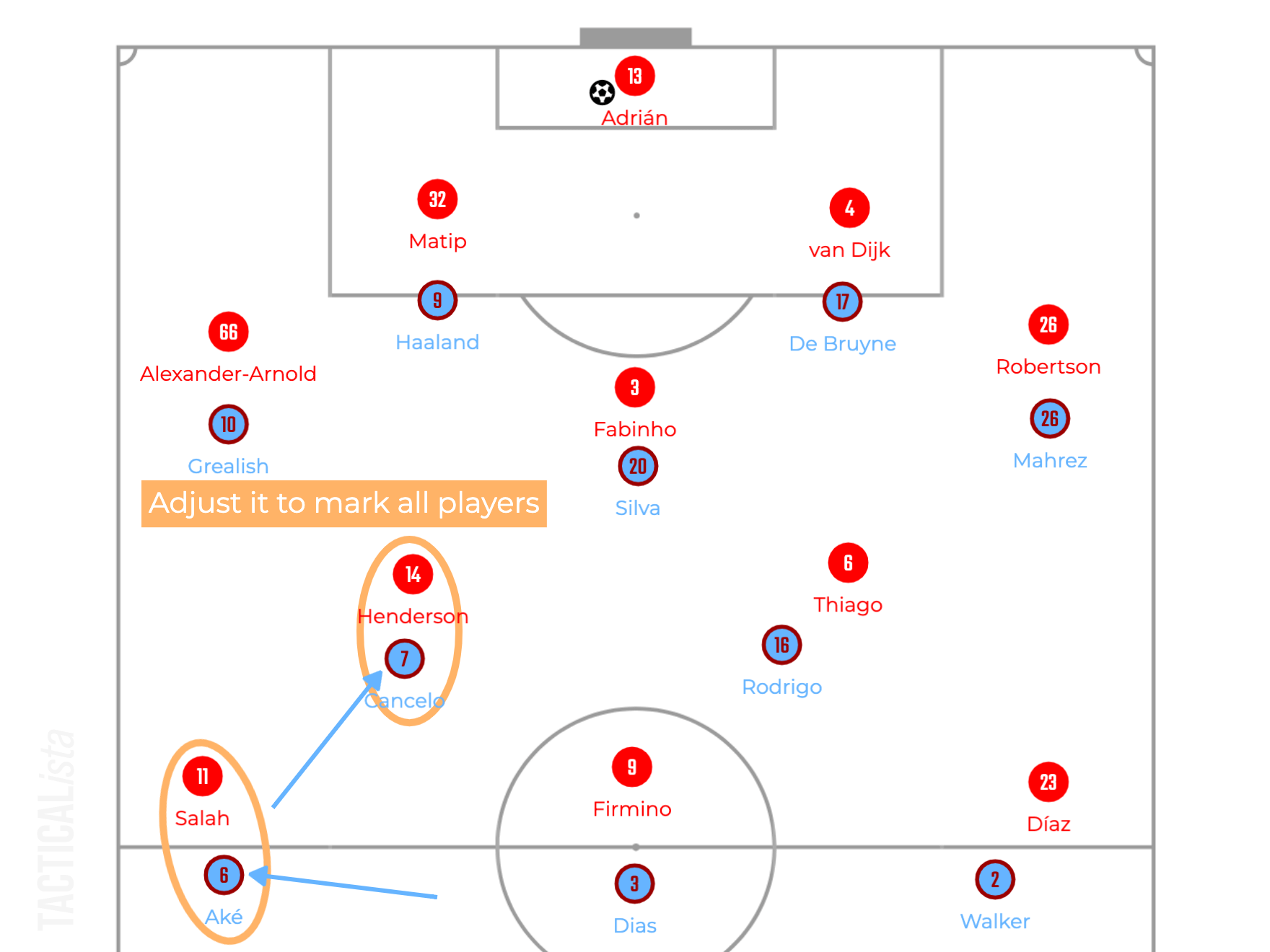 Even though City adjusted Liverpool’s build up, as it was mentioned before, Liverpool could progress the ball and beat the pressing. Against man-marking pressing, results of each duel are important. It can be both aerial and ground duels and Liverpool are excellent at winning ground duels by speed and protecting the ball. In terms of pace of players, both Salah and Díaz can run in behind and get the ball, and especially Salah had easily beaten Aké or Cancelo. Additionally, Díaz or Thiago can hold up the ball and keep it in a few seconds until teammates offer safe passing lanes. Thanks to these individual skills, Liverpool could progress the ball into the opposition half.

Secondly, how Man City bypass Liverpool’s pressing is going to be analysed. Compared to City’s pressing, Liverpool keep distances between teammates and defend each space rather than stepping up to mark the opposition players. Therefore, the key factor is going to be how to find the player whom Liverpool accept to leave. Let’s take a look at how Liverpool tried to win the ball in City’s half. 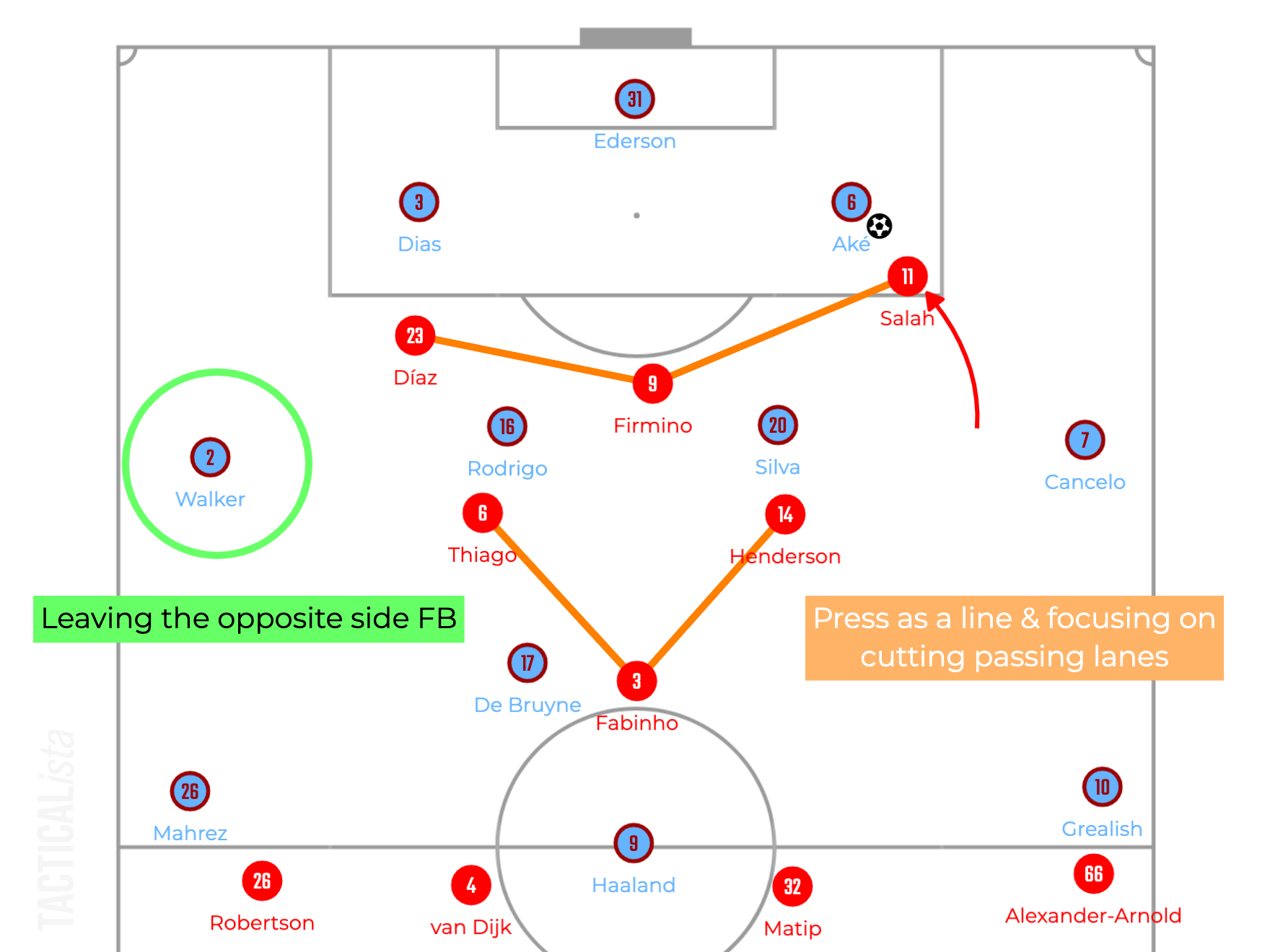 Liverpool organise a 4-1-2-3 and keep distances between each player to work as lines. Then, usually the winger tries to press to the centre back on the ball by cutting the passing lane to the ball side fullback to lock them in. However, Liverpool often leave the opposite side fullback to keep distances between teammates and make overloads in the ball side. Generally, it works well because most of centre backs cannot play diagonal long balls to the opposite side fullback. However, City players including Ederson have the quality to play that long balls so they could easily find the way to progress the ball.

Overall, both could easily find the way of build up, so they moved to the phase of the final third. And there was a crucial difference which dictated the result.

Manchester City is largely known as playing in a 4-1-2-3 but they were never playing in the 4-1-2-3 in this game, but they spent most of the time on playing in a 4-4-2. The reason of this will be discussed in the later chapter but this made a difference in the final third defending, as the Liverpool’s first goal shows everything.

When Liverpool played into the wingers, City tried to make it 2v1 against Salah and Díaz. However, making overload in a certain are means there is an underloaded area somewhere else. Then, it was the area where Alexander-Arnold scored. 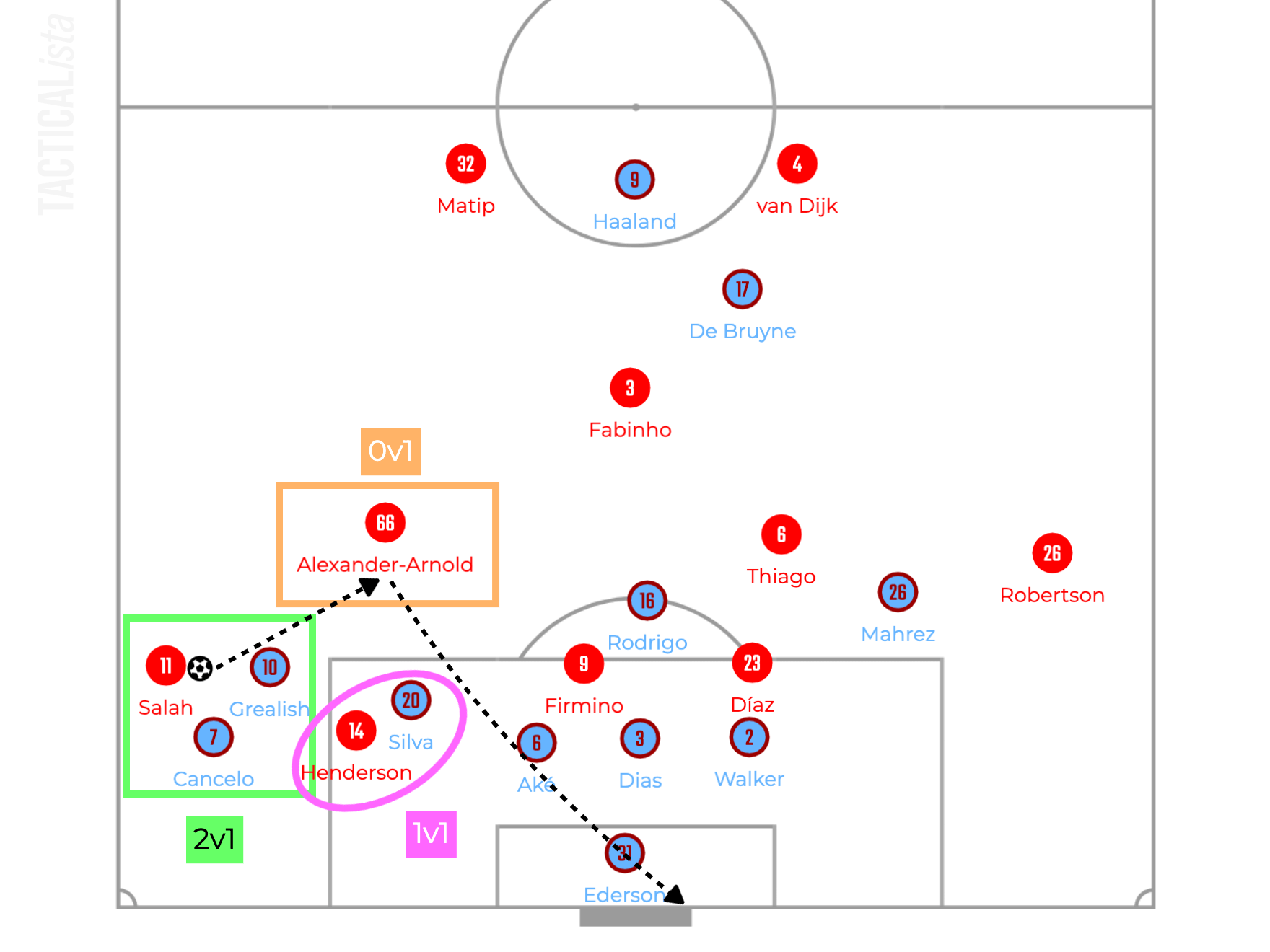 In this 3v3 situation, if City defended against the winger with the full back and winger, it left 1v2 situation where the defensive midfielder needed to watch Liverpool’s attacking midfielder and fullback. Of course, the attacking midfielder Henderson positioned himself in the more dangerous area, so Silva should have marked him rather than Alexander-Arnold.

Possible solutions are keeping 1v1 in the flank or letting the near centre back mark Henderson and Silva step up to Alexander-Arnold. However, both of them are risks for City. It is difficult to defend against Liverpool’s winger in 1v1 and dangerous to move one of the centre backs away from the goal. Therefore, defending in a 4-4-2 against Liverpool is nearly impossible. In the later chapter, the reason why City took a risk and what they wanted to get are going to be analysed.

On the other hand, Liverpool defended in a 4-5-1 really well and the key factor is still in the wide area. Compared to City, Liverpool had an extra player in the midfield, which made it possible to solve the problem City faced. 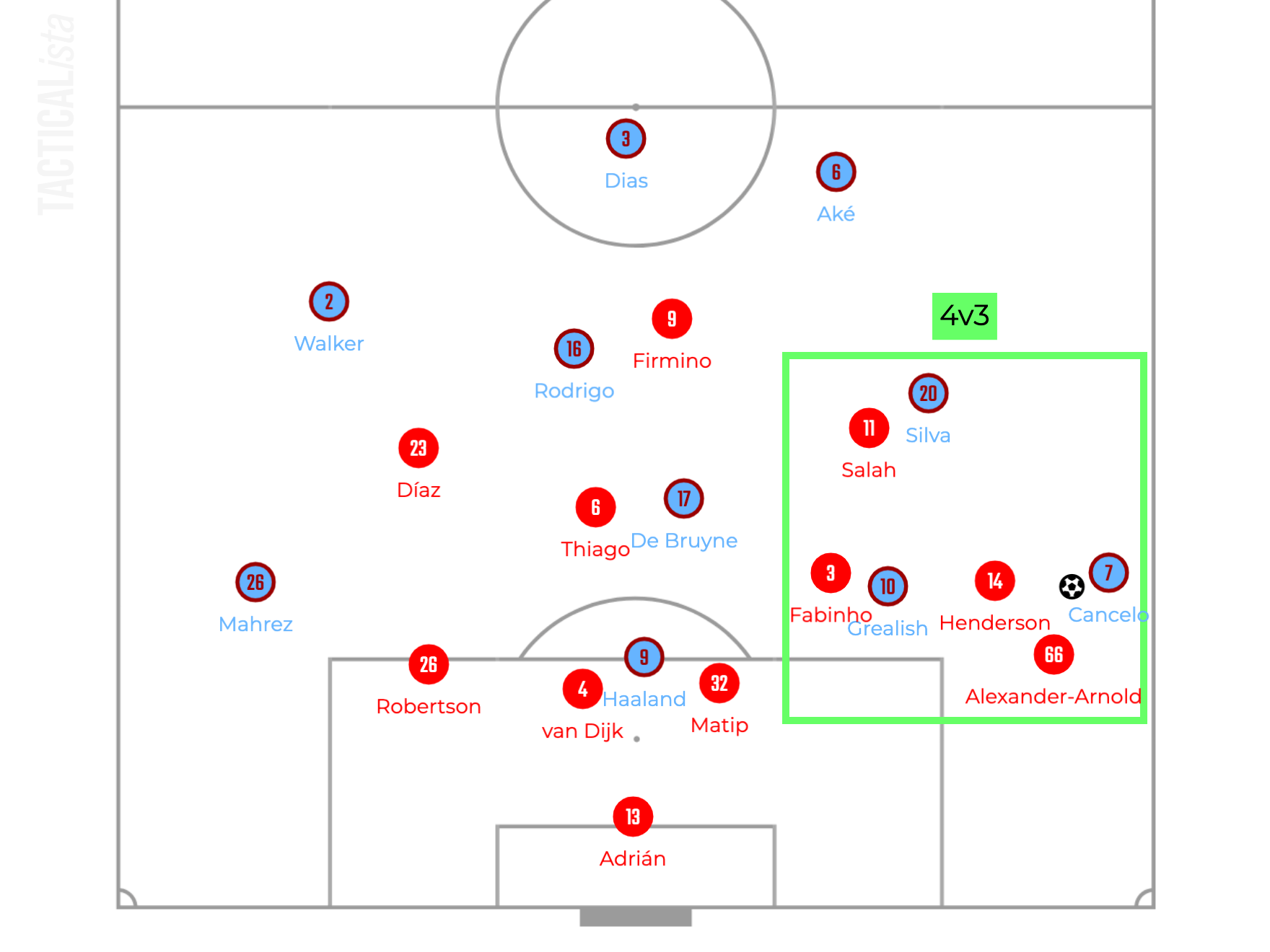 Thanks to the extra defender in the midfield, Liverpool could maintain the overload in the wide area. Therefore, they could make 2v1 against the player on the ball while avoiding leaving a player unmarked. This forced the player on the ball to play in the isolated situation and City struggled with breaking down the defensive block in the ball side.

As it was mentioned before, however, City took the risk to be reward something and it is going to be discussed in the next chapter.

What Man City Want to Do?

The reason why City has been trying to defend in a 4-4-2 from the preseason is to play in counterattacks. Letting De Bruyne be in the higher area of the pitch while defending means that he can receive the first pass after regaining the ball and play the key pass in behind the opposition defenders. 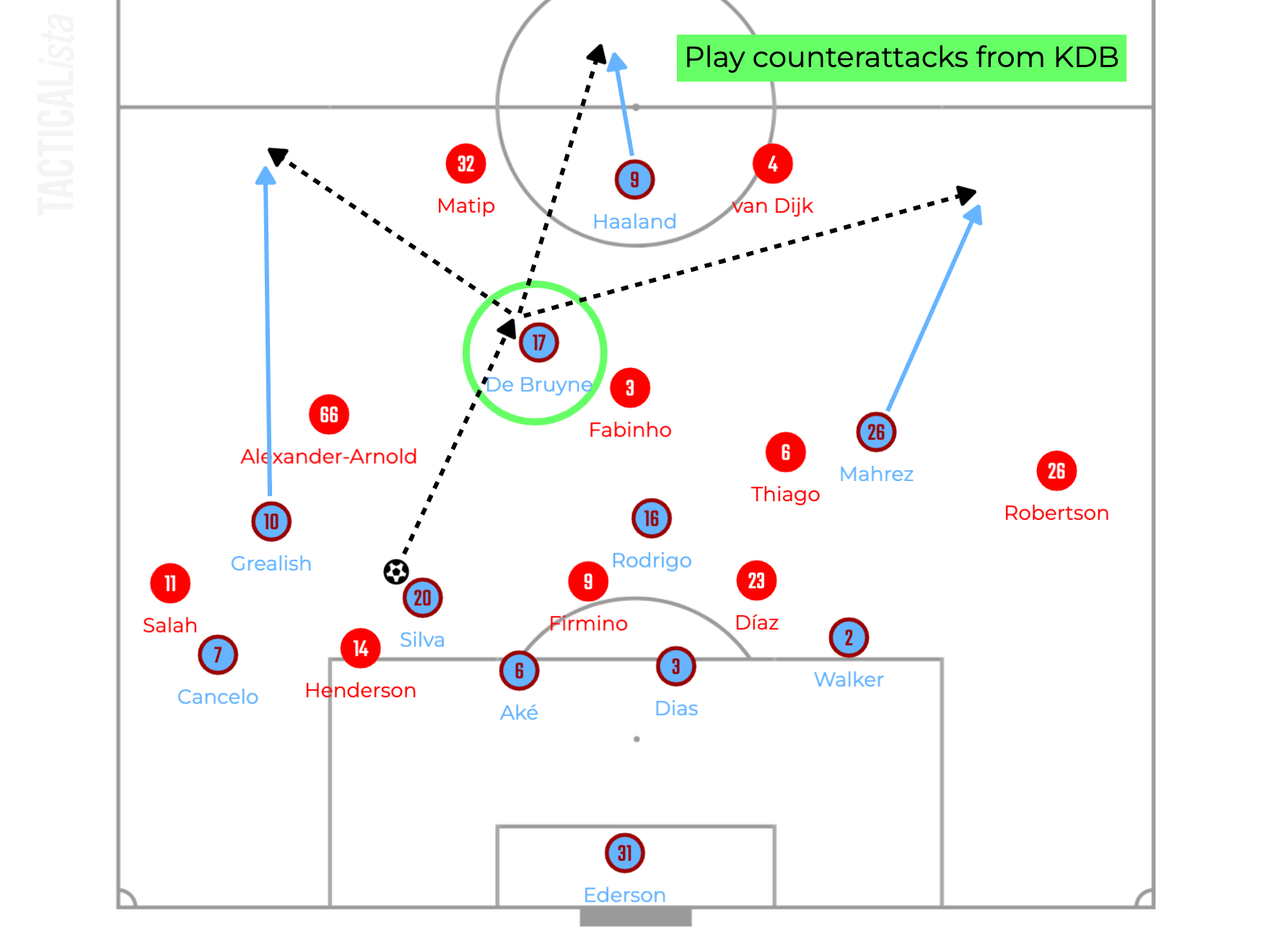 More detail about this is also written in this article so please read this to know what City have done in the preseason.

What Does New City Look Like in 22-23 Season?This article explains how Manchester City played in preseason games and will play in Premier League in 22-23 season. The tactical change of the attacking transition after pressing and same principe of build up will be analysed....

Then, let’s think about why City need to play in counterattacks. In that article, I concluded that the reason is to score more goals but I found another one in this game. It is to win this kind of games against stronger teams like Real Madrid or PSG in the Champions League. Against them, in 90 minutes, there must be time when both teams are stretched and play fast attacks each other. This happened in the second leg against Real Madrid but City failed to score another one and lost. Then, the goal City scored in this community shield was created from fast attacks when both teams were stretched and it was an ideal attack from De Bruyne. Therefore, City need to improve their 4-4-2 defending to reduce the risk while gaining the reward as they got in this game.

I cannot wait to see the evolution of both teams in this season. Thank you for reading.