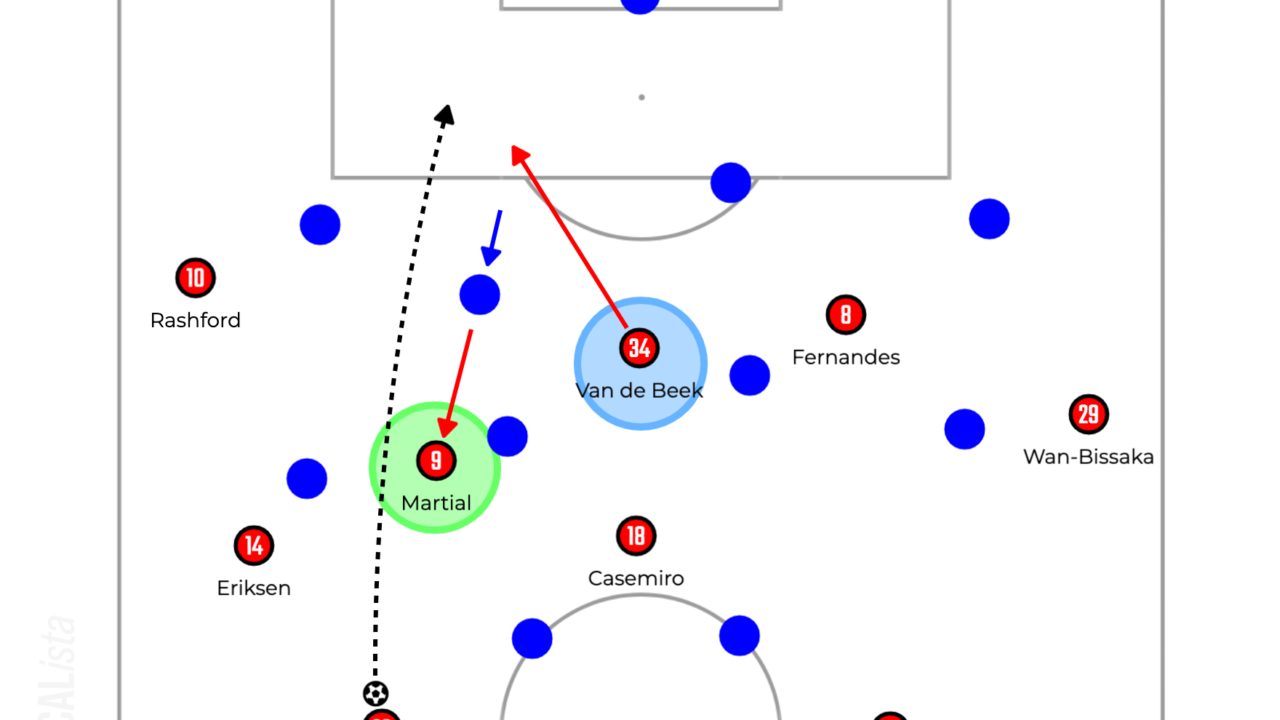 After the break of Qatar World Cup, Manchester United under Erik ten Hag have kept winning. After losing against Brighton and Brentford in his first two games this season, Erik ten Hag was under criticism. On the other hand, it was also the fact that they won against Liverpool and Arsenal. However, these results were attributed to his defensive tactics with 29.5% of possession against Liverpool and 39.5% against Arsenal. Now, after the break of World Cup and departure of Cristiano Ronaldo, they seem to be able to dominate the game with the ball in every single game. Then, what is his tactic at Manchester United? It is going to be analysed through this article. Please enjoy the analysis.

Let’s begin with taking a look at the shape in possession first. 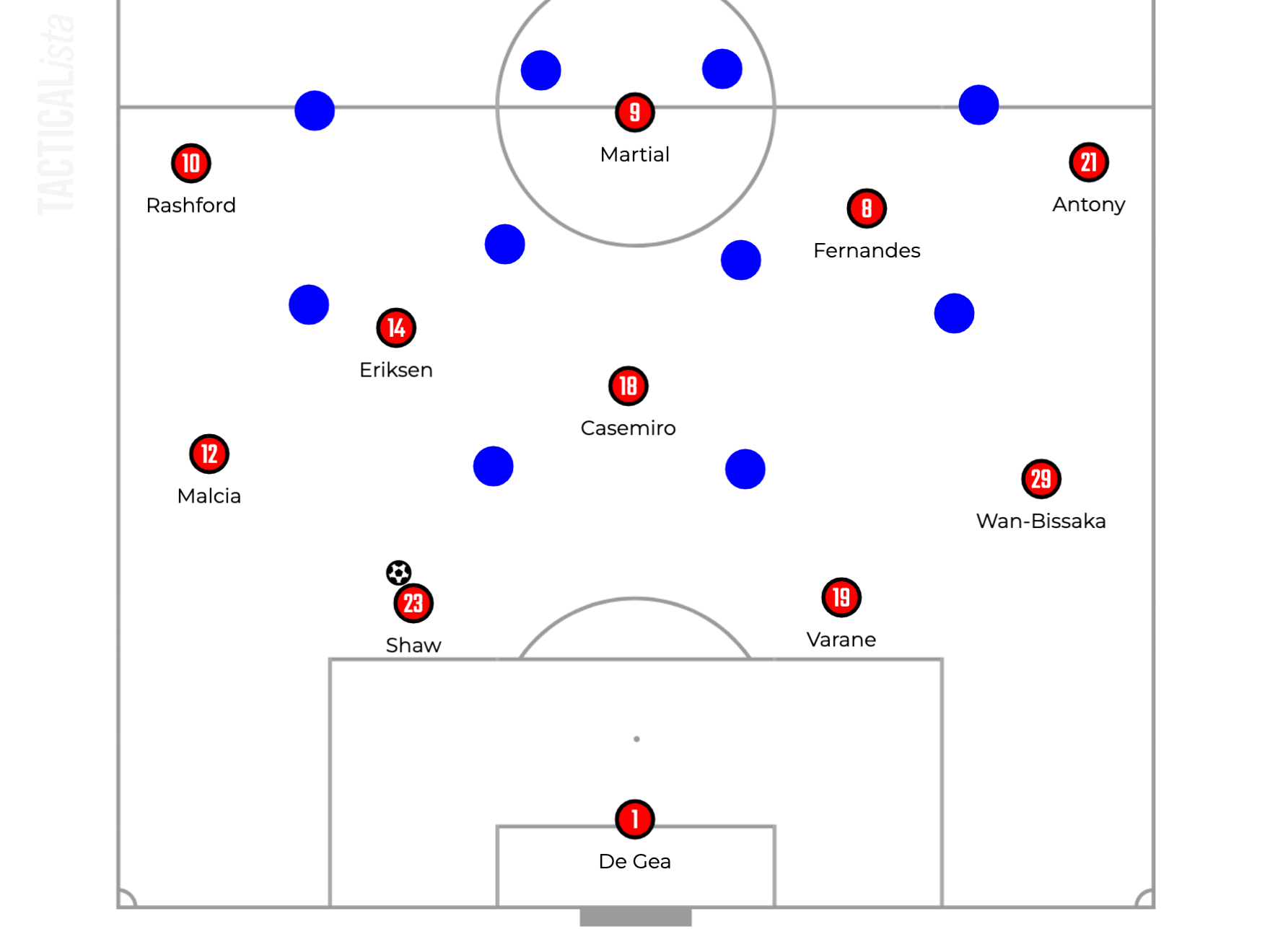 It can be described as either a 4-2-3-1 or 4-1-2-3, but they are just a difference of the position of Christian Eriksen. As a team, they are flexible and changing their position many times, but Eriksen is always positioned himself in a proper area depending on the situation. Therefore, it looks like double pivots when he drops to receive the ball and two attacking midfielders when he waits a split pass in between lines.

Additionally, the system can vary as advancing into the midfield. There is no strict shape, but they often keep placing at least four players to build the attack at the back. 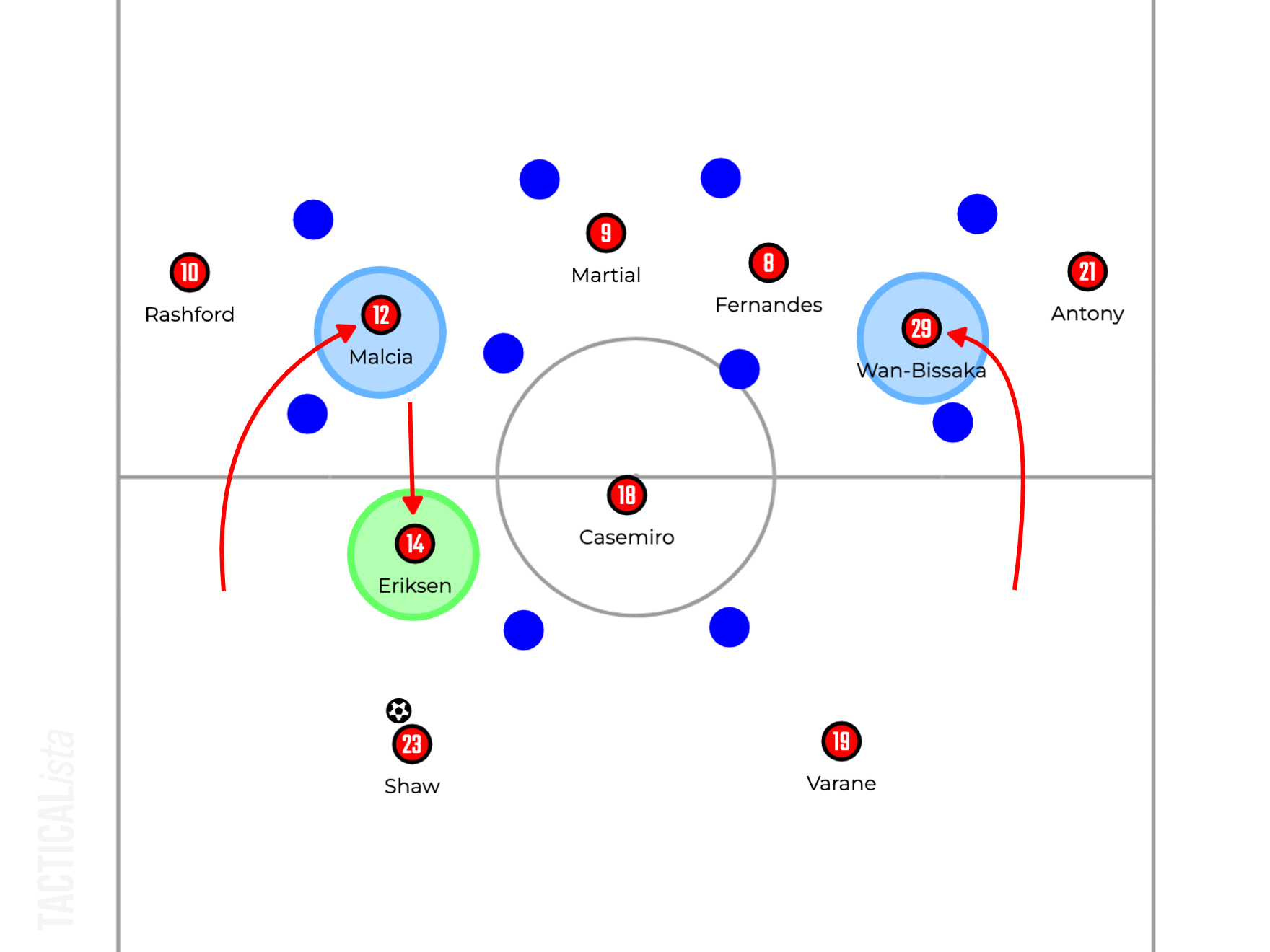 This is an example when Luke Shaw playing as a centre back. As it was mentioned before, Eriksen is one of the most flexible players in the team and often drops back next to Casemiro to help building up at the back. In this case, they have got four players to keep the possession at the back, allowing both fullbacks to go forward. To overlap or underlap a winger depends on the position of him, but it does not mean they are always positioned themselves up front and sometimes one of them comes inside next to Casemiro to help him.

Another example is when Shaw is playing as a left fullback. 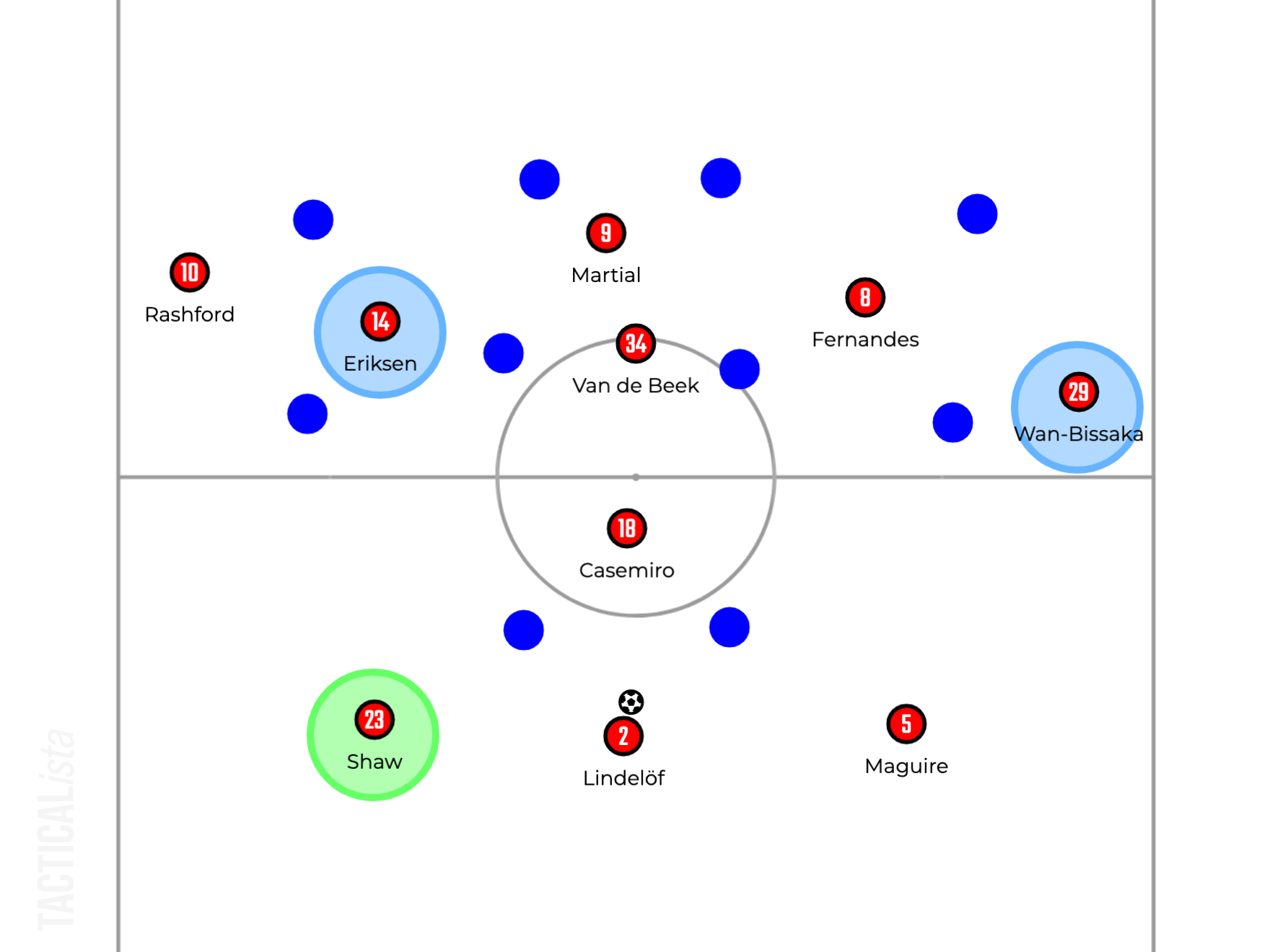 In this case, he often stays at the back and this can let Eriksen stay in between lines and the right fullback move forward. Of course, however, Shaw can also overlap the left winger Marcus Rashford when Eriksen drops back at the back. Additionally, Casemiro sometimes joins the back line to make it back three against the opposition two strikers to get the numerical advantage and Eriksen will be the pivot in this case. Overall, the basic rules such as having at least four players to build up or creating back three against two strikers to gain the numerical advantage can be found, but who are in each position is flexible.

This kind of tactical explanation sounds great and effective, but to be fair, they often fail to use the advantage. The biggest problem is that nobody at the back can step in to break the opposition first line and drag one of the opposition midfielders to create space in between lines. Therefore, in many cases, they cannot advance the advantage they gained through building up into the final third. 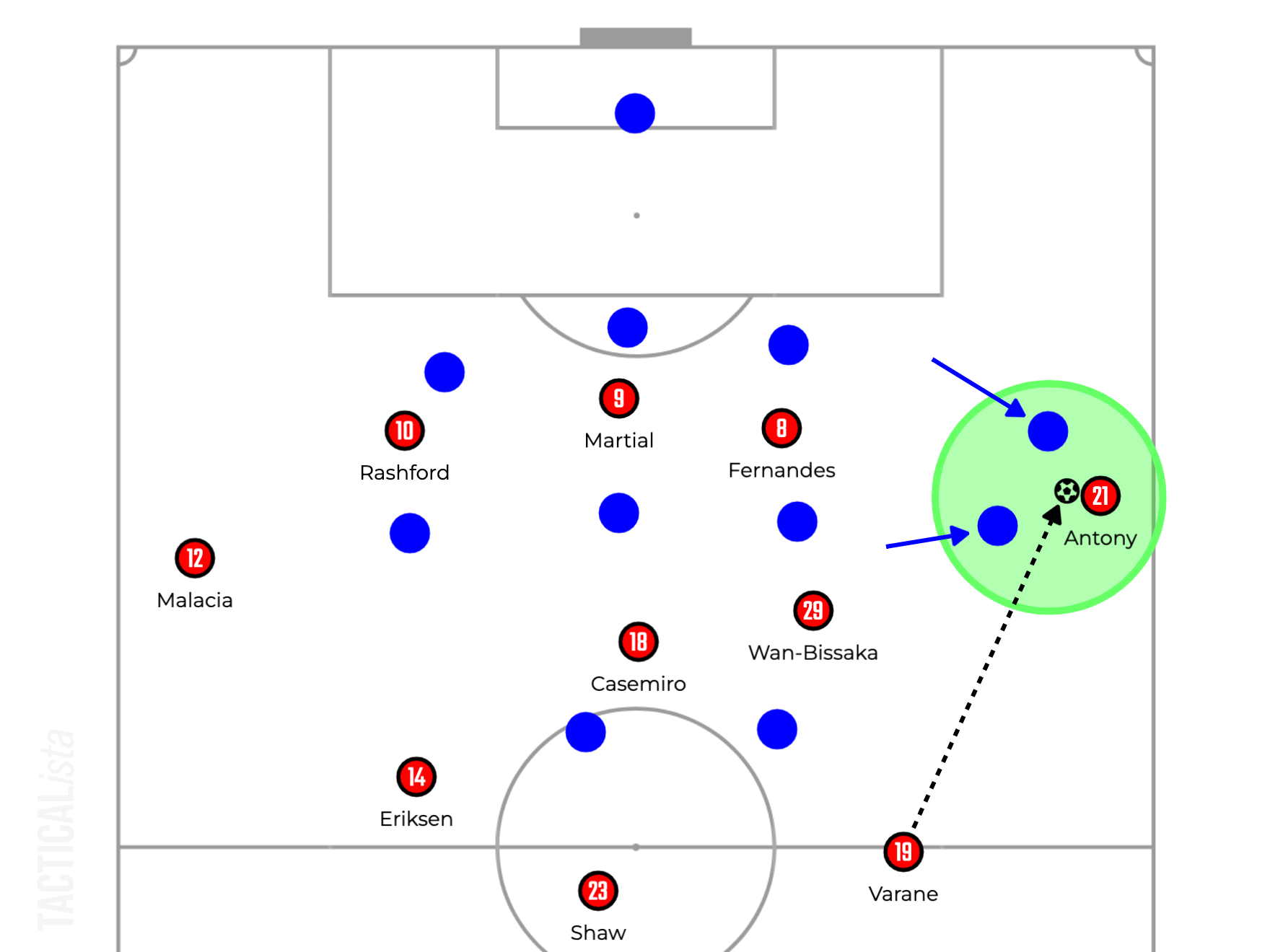 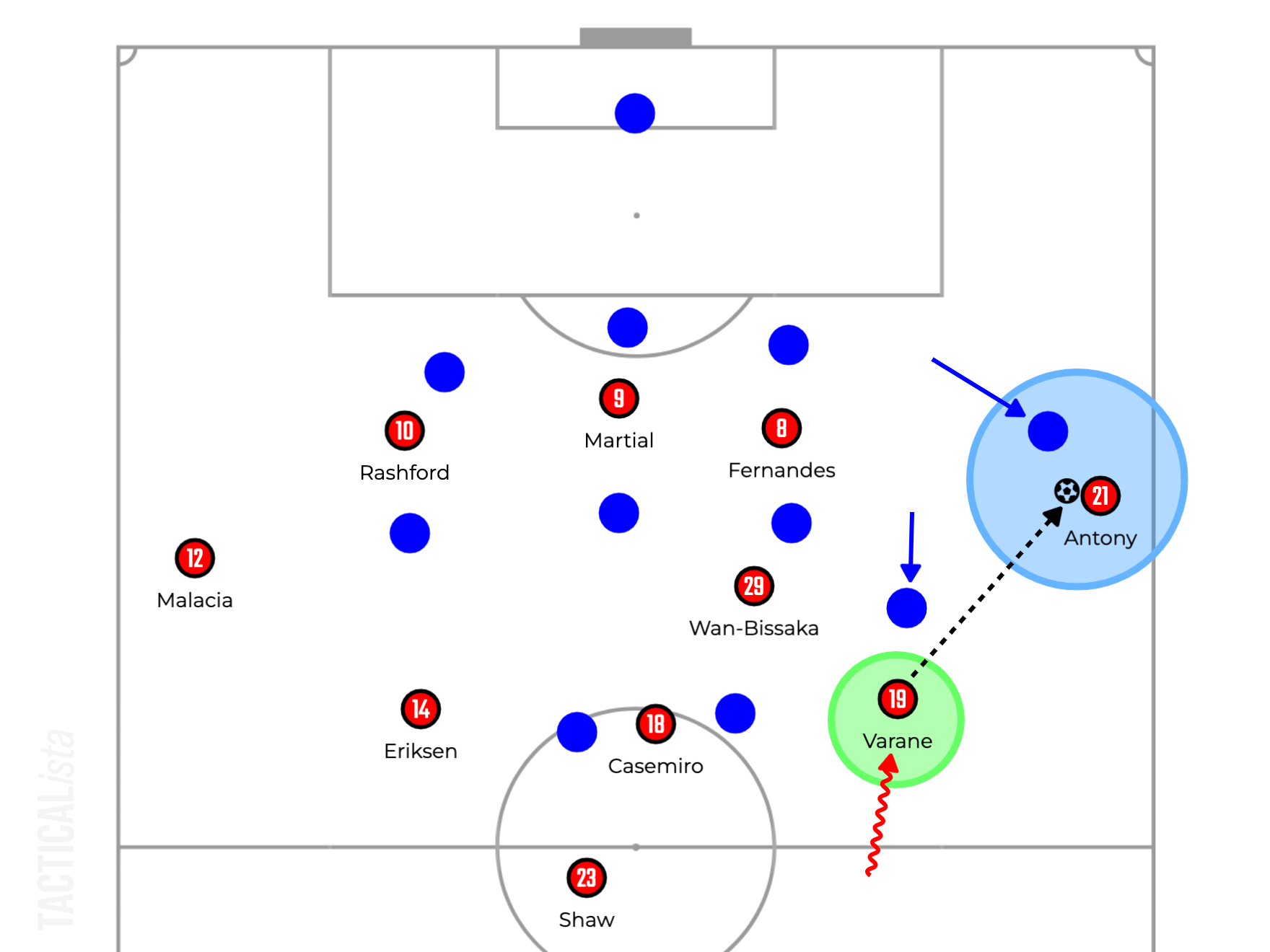 This kind of skill is often overlooked, but extremely important to make the most of the advantage gained by tactics. 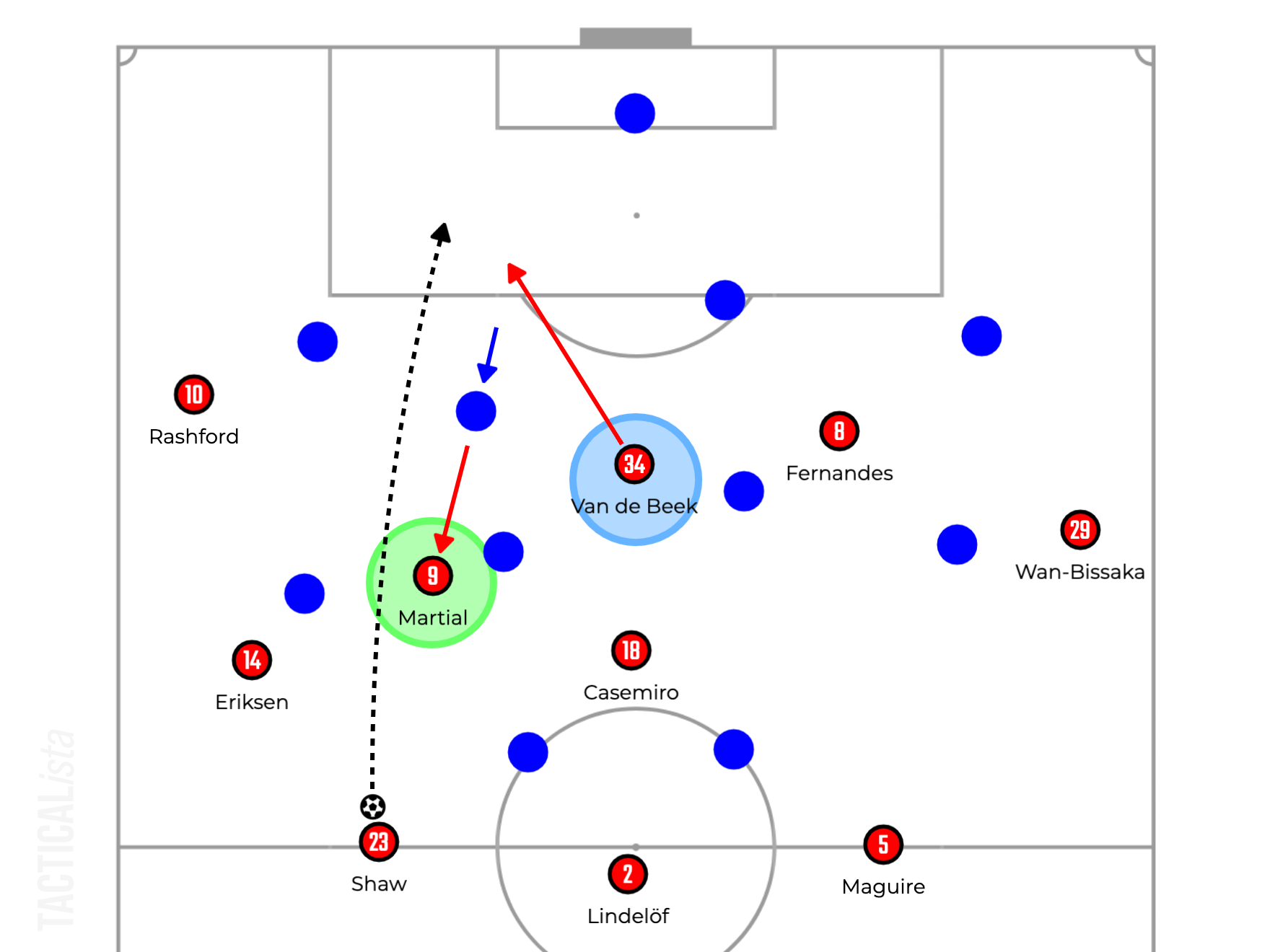 Like this example, the combination of Martial dropping back and one of the attacking midfielders, especially Donny Van de Beek running in behind can be often found. Not only in the middle area, the underlapping fullbacks in wide areas are also one of the movements of this. This kind of vertical combination is one of the important principles.

One of the differences between Ajax and Manchester United under Erik ten Hag is the simplicity of tactics in the final third. This might be because he has not had time to implement all his tactics or he decided not to regulate players by complicated tactics to letting them maximise their talent or creativity. Therefore, they still rely on wingers’ skill to beat one or two players in the final third. However, as it was mentioned in the previous chapter, the players at the back cannot create favourable situation for the wingers, so sometimes they struggle to break down the opposition defensive block with ending simple crosses from the outside of the box.

Ten Hag’s Ajax Tactical Analysis ~No Pain No Gain~This article provides the insights of Ten Hag's football at Ajax. What makes their attacking beautiful and unstoppable is analysed. And the weakness of them is also discussed.... 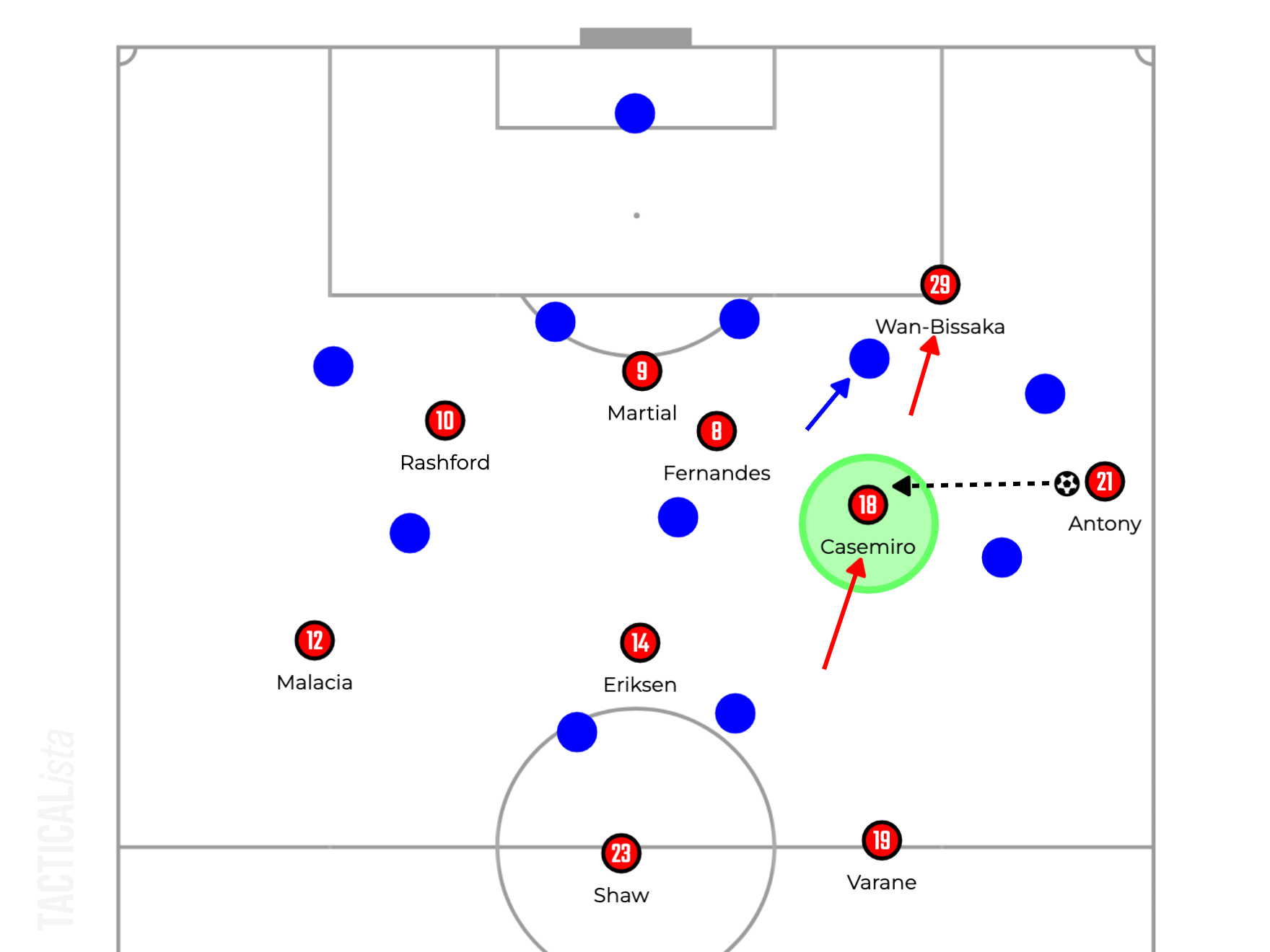 Casemiro is not good at helping the build up play with facing backwards, but great at stepping up to join the attack with facing forwards. Additionally, in this case, Eriksen is also important. He can drop back to be another pivot, which can allow Casemiro to go higher up the pitch.

Overall, the tactics in the final third is similar to the one in Ajax, but there is still room for improvement. However, it might be an intentional to rely on the talent of attackers. As it was mentioned in this chapter earlier, in order to break down the opposition defensive block, the players at the back need to be able to step in and break the opposition first line to drag one of the midfielders out.

In terms of out of possession, without Ronaldo, finally they can press high. The shape is a 4-3-3 and wingers try to press with cutting a passing lane from the centre back to the fullback and it looks like classic Liverpool pressing. However, the difference is the midfielders’ marking. 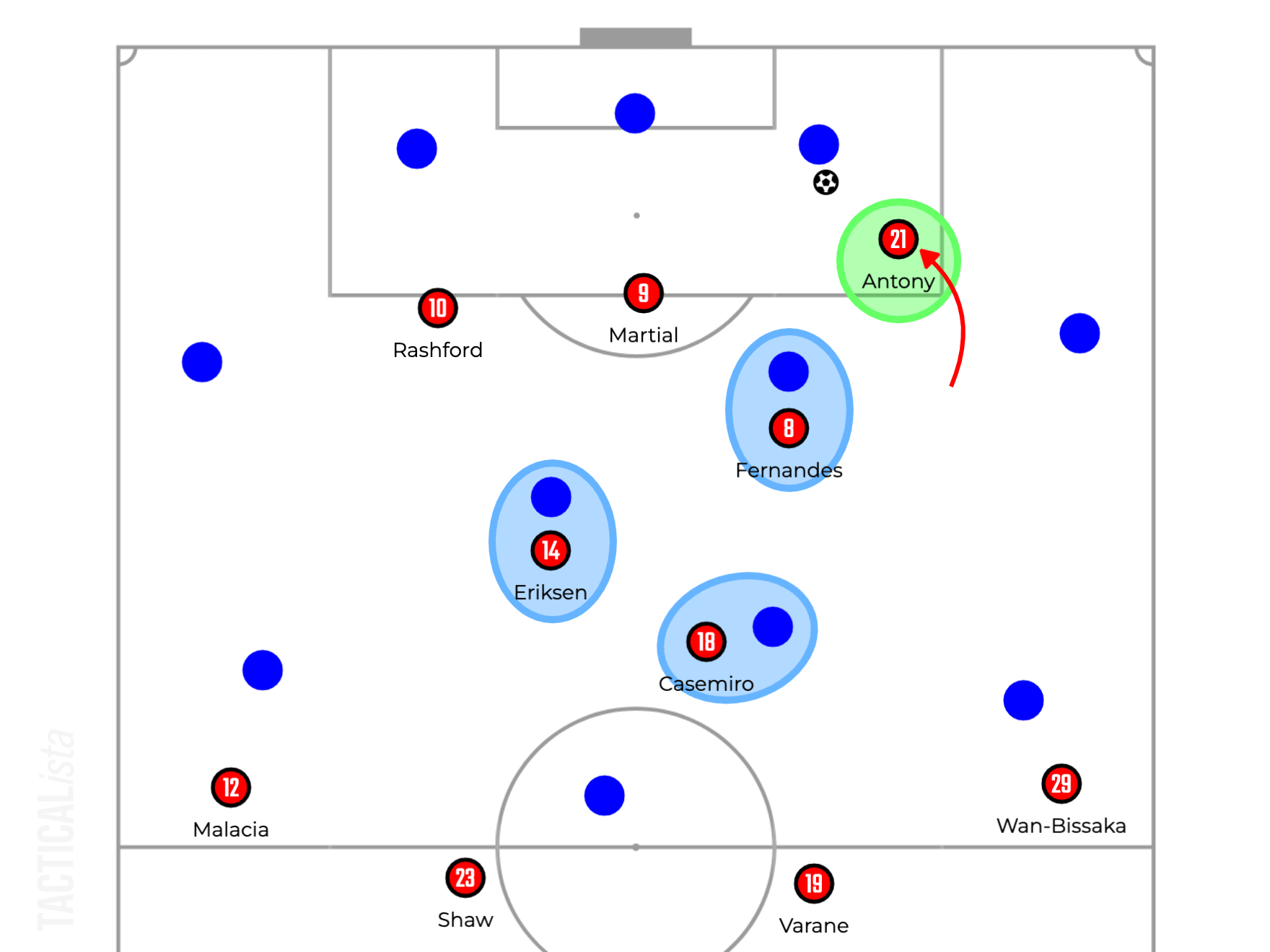 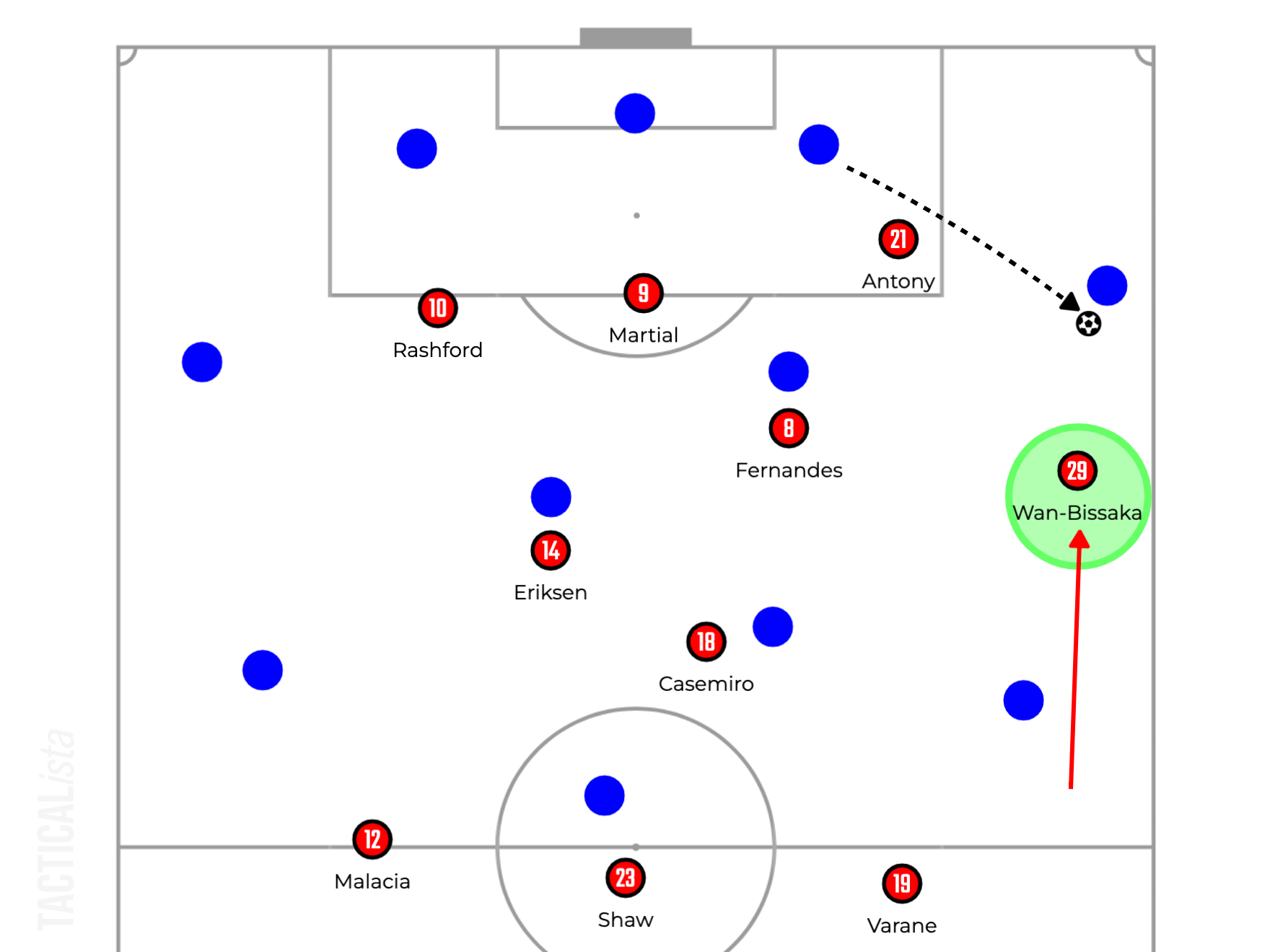 In this case, midfield players are not ready for pressing to the opposition fullback because they are marking the opposition midfielders. Therefore, it will be a task for the fullback to step up to apply pressure on the ball. However, the distance is sometimes too long to approach the ball and this is one of the famous way to beat pressing of Manchester United.

Overall, they focus on marking the opposition players instead of defending as a line, so if they fail to keep applying pressure on the ball, the pressing can be beaten and the opposition team can progress the ball.

As it was discussed above, they are focusing on marking the opposition players, so the duels are important. In terms of this, the quality of defenders and defensive midfielders are usually better than the opposition attackers, so there is no problem. Especially, Casemiro or Eriksen can work hard to defend the space in front of the back line and also cover the space in the channel. 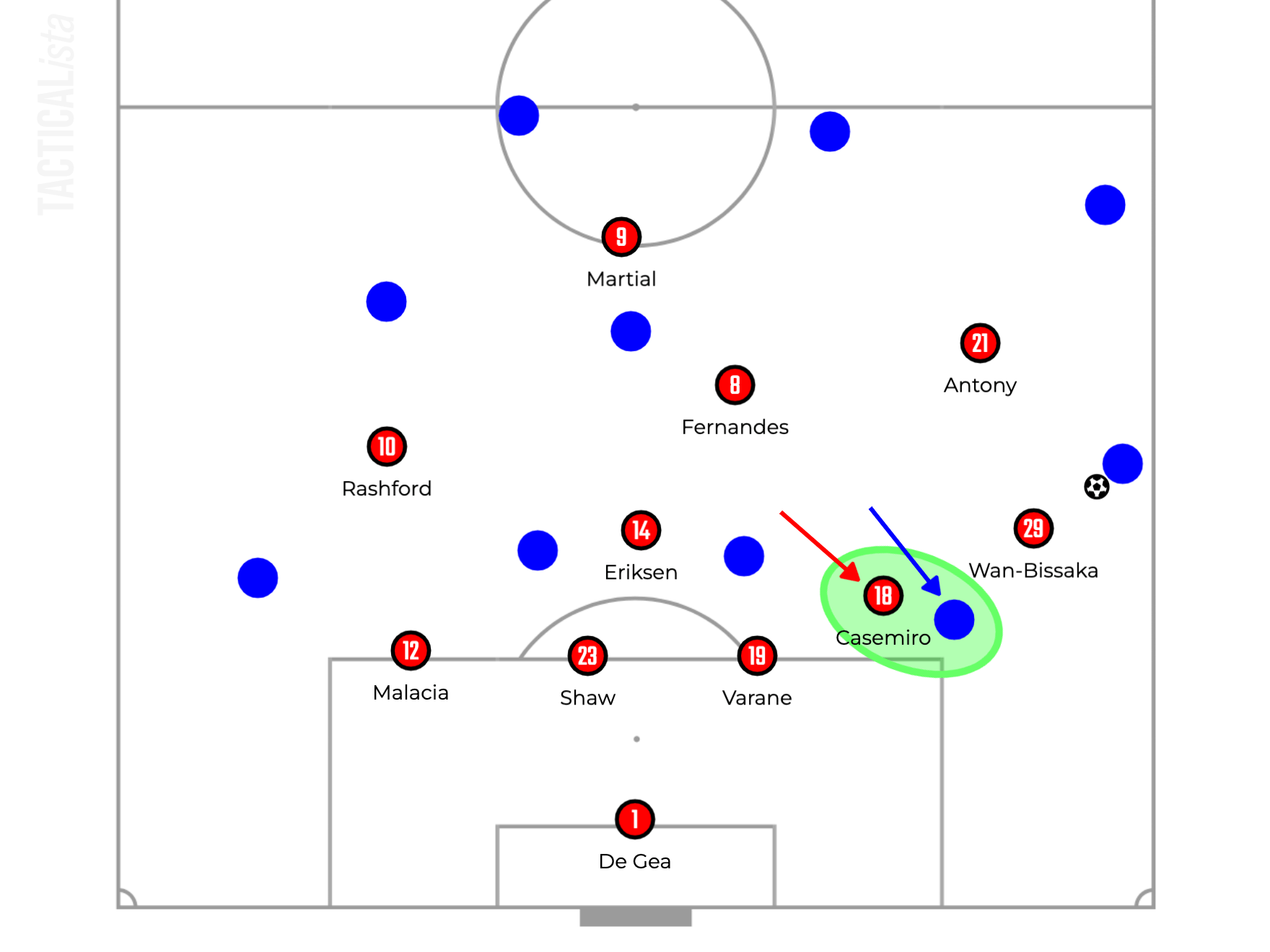 However, we all know that they can win the game with solid defending like they did against Liverpool or Arsenal earlier of the season. Therefore, if they try to do that, they can do it.

Manchester United under Erik ten Hag will compete titles in a few years, and they already have a vital chance to win Carabao cup this season. Modernised Manchester United is coming soon. Thanks for reading. I hope you enjoyed.