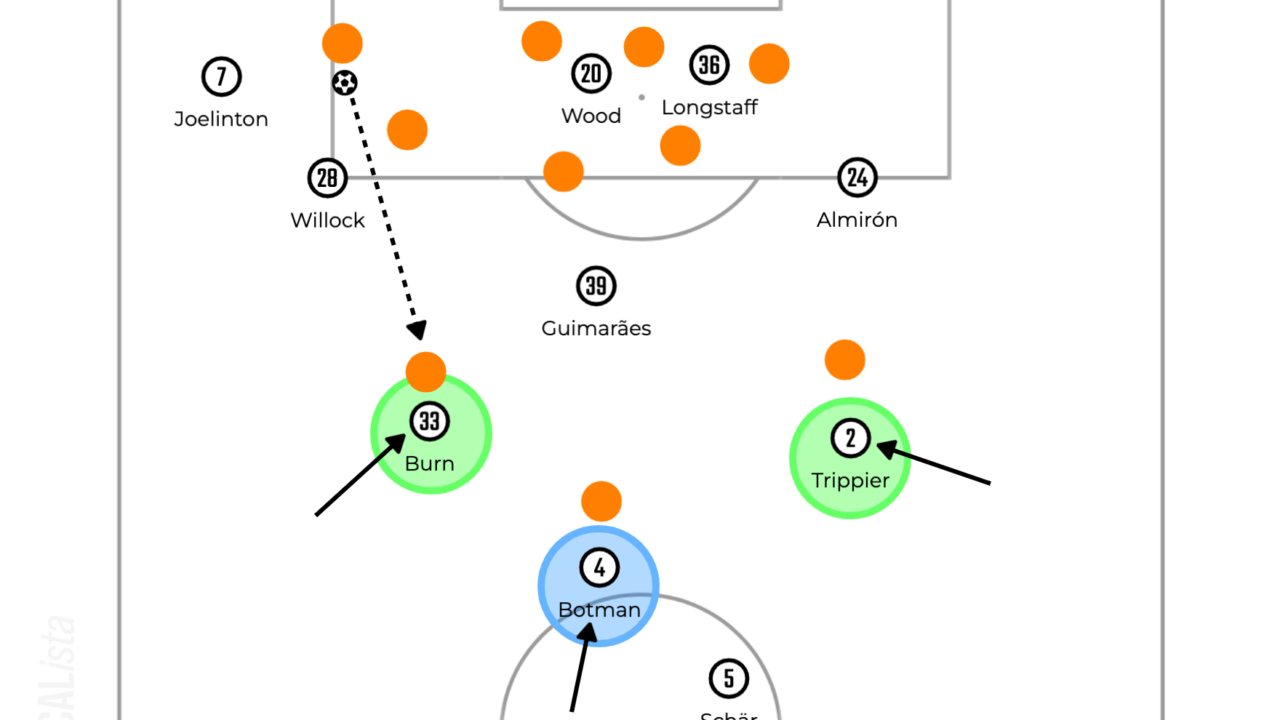 Now, Newcastle United is in top four and obviously joined the title race, or at least they are competing for the Champions League spot. Eddie Howe taken over the Magpies in 2021 and turned them into a title contender in a year. Then, what is the strength of them? This is a quite difficult question to answer because they are simply better in all phases of the game. They can defend well and attack well. They have a great goalkeeper, solid defenders, technical midfielders, quick wingers and powerful strikers. They are simply better for everything. And more importantly, they can work as a team under clear tactics.

In this article, the tactics which make Newcastle an unstoppable team are going to be analysed. I hope you will enjoy them.

In previous articles, we have analysed teams such as Aston Villa or Brighton, which play short from the back to try to invite the opposition pressure to create and exploit the space up front.

Aston Villa Tactical Analysis [Unai Emery’s Domination of the Depth of the Pitch]In this article, the tactics of Aston Villa, who appointed Unai Emery as a new manager, are going to be analysed. In possession, they try to play short passes to drag the opponents out and exploit the space in behind them quickly with four attackers. Then, out of possession, the back line is set extremely high to press aggressively and force the opponent to play long roughly. Overall, new Aston Villa attack with maximising the depth of the pitch and defend with minimising the depth of the pitch. Let’s get started with analysing their build up tactics....

Brighton & Hove Albion Tactical Analysis [Tactical Masterpiece from Graham Potter to Roberto De Zerbi]This article gives you an insight about tactical analysis of Brighton under Roberto De Zerbi. The detail of both in possession and out of possession are discussed. ...

Unlike them, Newcastle play out from the back but play simple. The final objective of building up is giving time and space for one of the players at the back and playing long in behind simply.

All four defenders are great at playing long and they often do it to escape from the opposition pressure. Since their final objective is not inviting the opposition pressure to create and exploit the space in between lines, they do not hesitate to switch the ball so many times. Their purpose of playing out from the back is giving time and space for one of the players at the back to play long in behind comfortably, so keeping playing long horizontally away from the opposition pressure is important. Once one of the players at the back can play long, both wingers are ready to run in behind. Additionally, both Chris Wood and Callum Wilson are strong and great at controlling long balls and laying it off to one of the wingers or left attacking midfielder. 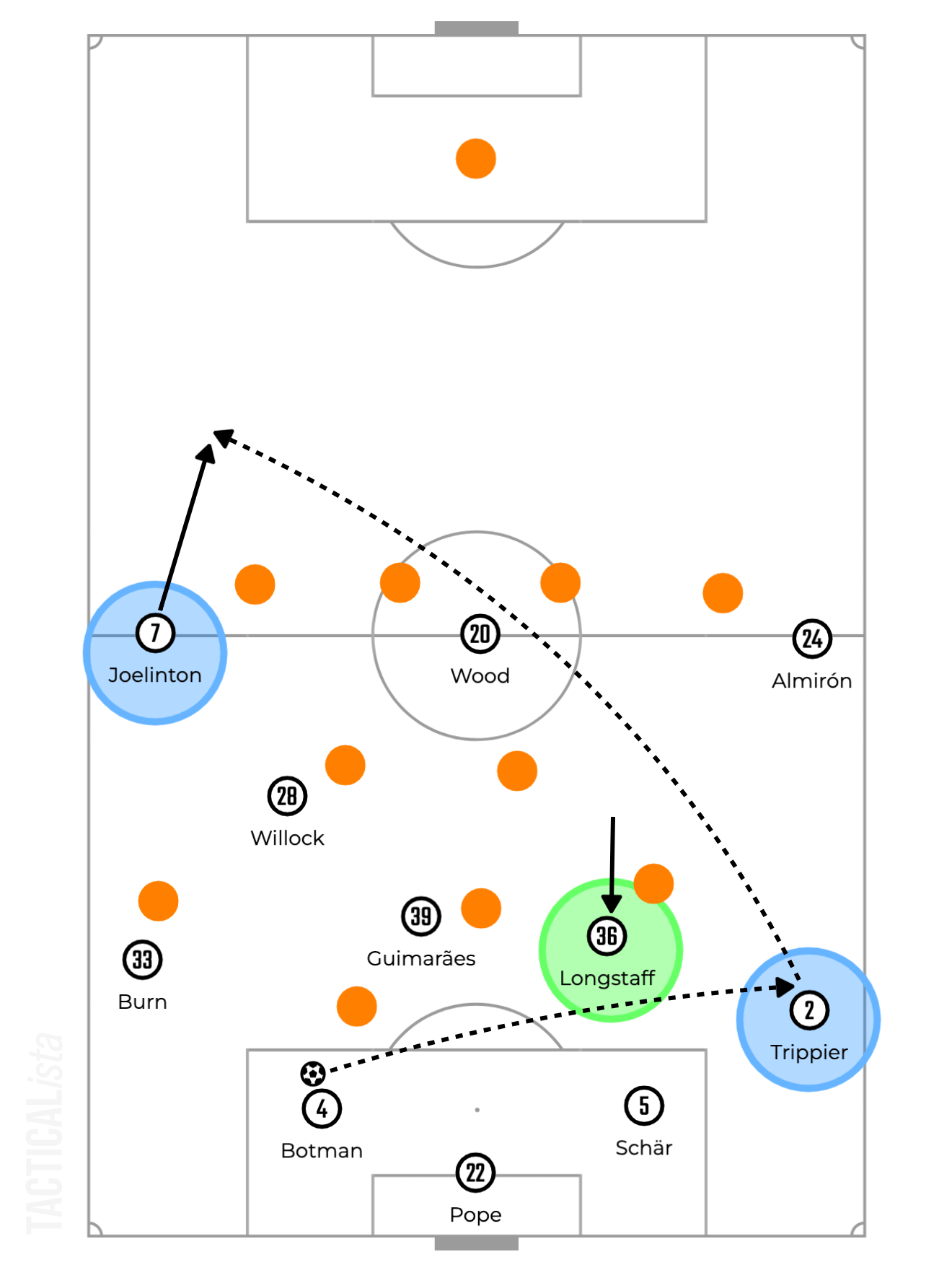 In terms of the system when playing out from the back, the right attacking midfielder Sean Longstaff often drops deep next to the defensive midfielder Bruno Guimarães. This gives Guimarães a licence to move quite flexibly as his strength is keep moving to offer an additional passing lane and carrying the ball forward. Thanks to the presence of Longstaff, Guimarães can leave his original position to play comfortably. On the other hand, the left attacking midfielder Joe Willock or Joelinton often positioned himself higher to receive the ball in between the lines. This asymmetry of midfielders is one of the characteristics of Newcastle.

It is obvious that playing long in behind is the most dangerous attacking play because it can create a 1v1 situation in a second but the probability of losing the ball is high. However, they do not hesitate to lose the ball because their defence is solid and organised. Thus, it is possible to say that they can play simple but the most effective pattern again and again because they can also play better out of possession.

However, the characteristic of them is doing this even in the situation where the opposition defenders are closing the gap tightly. Many teams try to switch the ball or recreate the attack when the opponents defend well. However, as they play simple when building up, they try to do it simple in the final third. They hardly switch the ball in the final third but try to break down the ball side simply. They do not hesitate to make a diagonal run towards the wide areas in the 18 yards box and the guy who often makes a run into the box from the wide areas is Miguel Almirón. 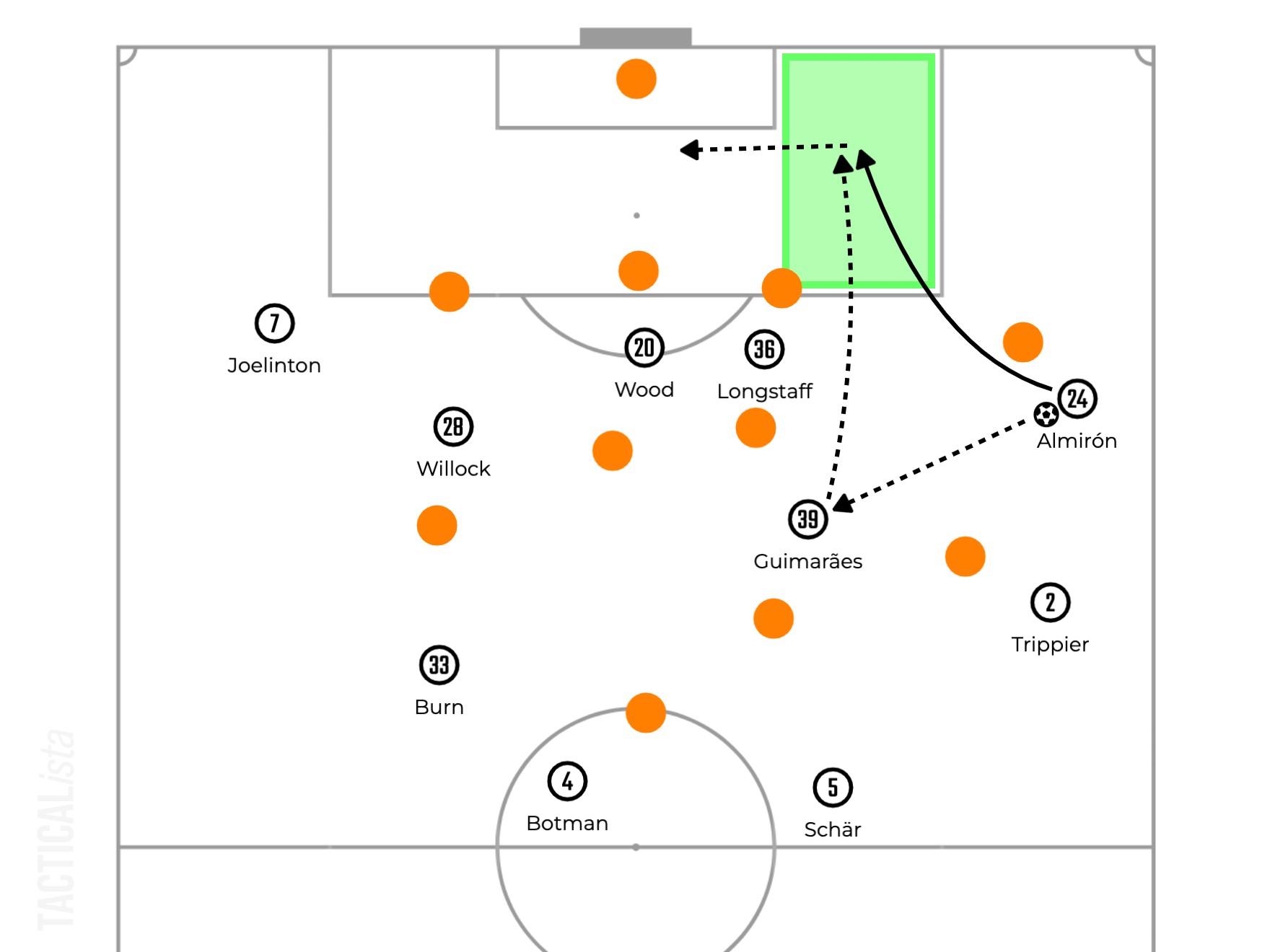 In terms of characteristics of other players, in the right side, not only Almirón but also Longstaff and Kieran Trippier are also dynamic players. They can make an overlapping or underlapping run to make an option to play through or be a target player for crosses. On the other hand, in the left side, Willock is a key player. Like Almirón, he can make a diagonal run into the box and take on the opposition fullback. Eddie Howe often makes more changes of players in the left side than the right side, so it is assumed that he is still looking for the best combination of players.

It was mentioned in the previous chapter that they can lose the ball because they can play well out of possession, but it is exactly same in the final third. They can play simple but the most effective pattern, which is to penetrate the box with a diagonal run, without hesitating to lose the ball thanks to the solid structure of the rest defence. 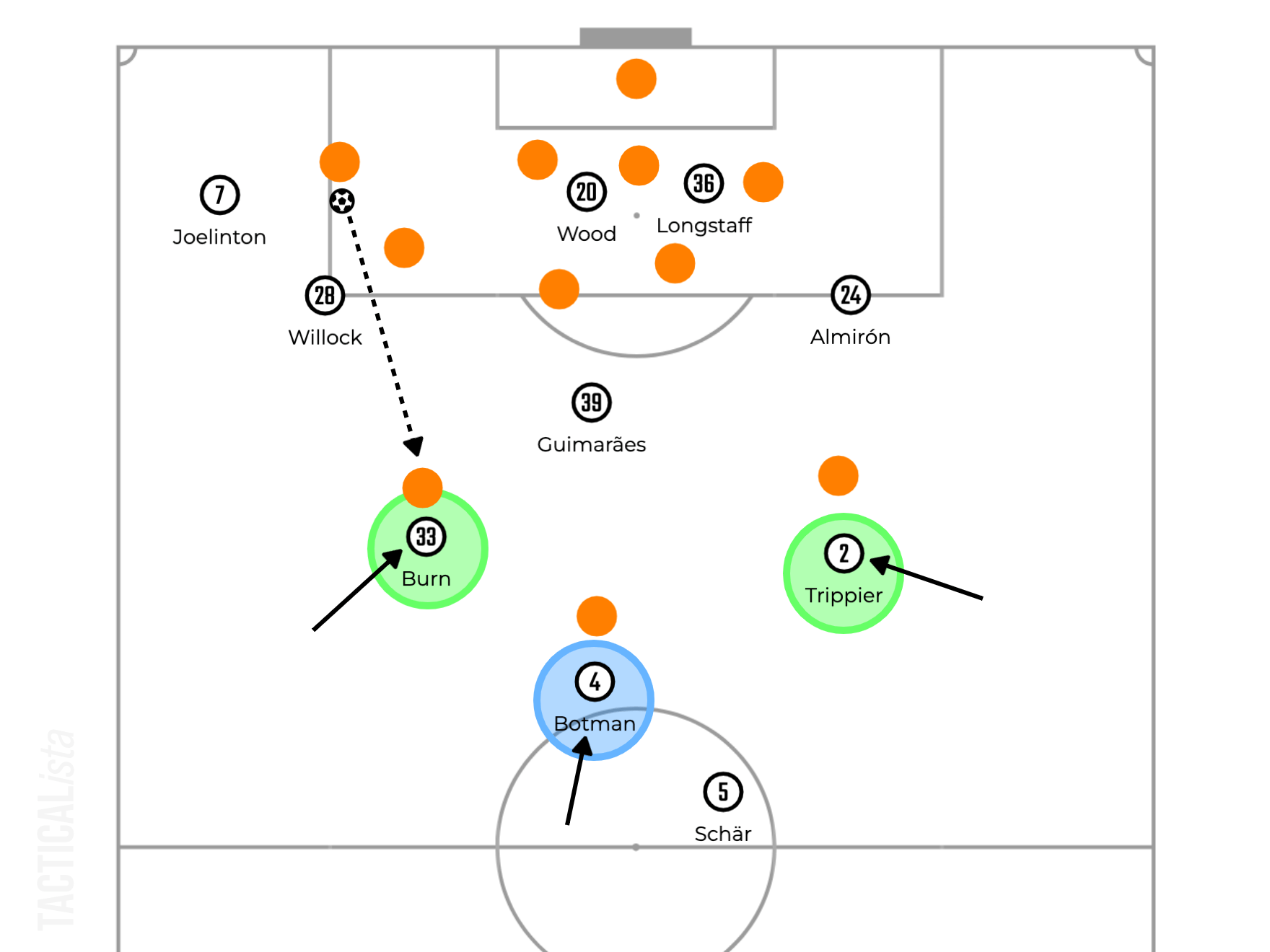 When fullbacks are not involved the attacking play up front, they come inside to manage the second balls and protect the opposition counterattacks in the middle. This is one of the popular advantages of the false fullbacks. Additionally, both centre backs are strong and confident to step up to apply pressure on the opposition striker or even intercept the pass to him. These organised rest defence can also give Guimarães a licence to move forward to join the attack in the final third. As it was discussed in the previous chapter, his strength is moving flexibly and link up with other players up front. The solid rest defence can maximise his ability and create overloaded attacking combination in the final third.

As it was discussed in the analysis of their tactics in possession, they can defend well. It does not mean they can only defend the goal, but they can win the ball by their intense pressing.

Their pressing has two parts. When they press high, their three attackers lead the pressing, but in the midfield, the attacking midfielders press to the opposition player on the ball first.

When pressing high, their three attackers work together to lock the opposition team in a small area. 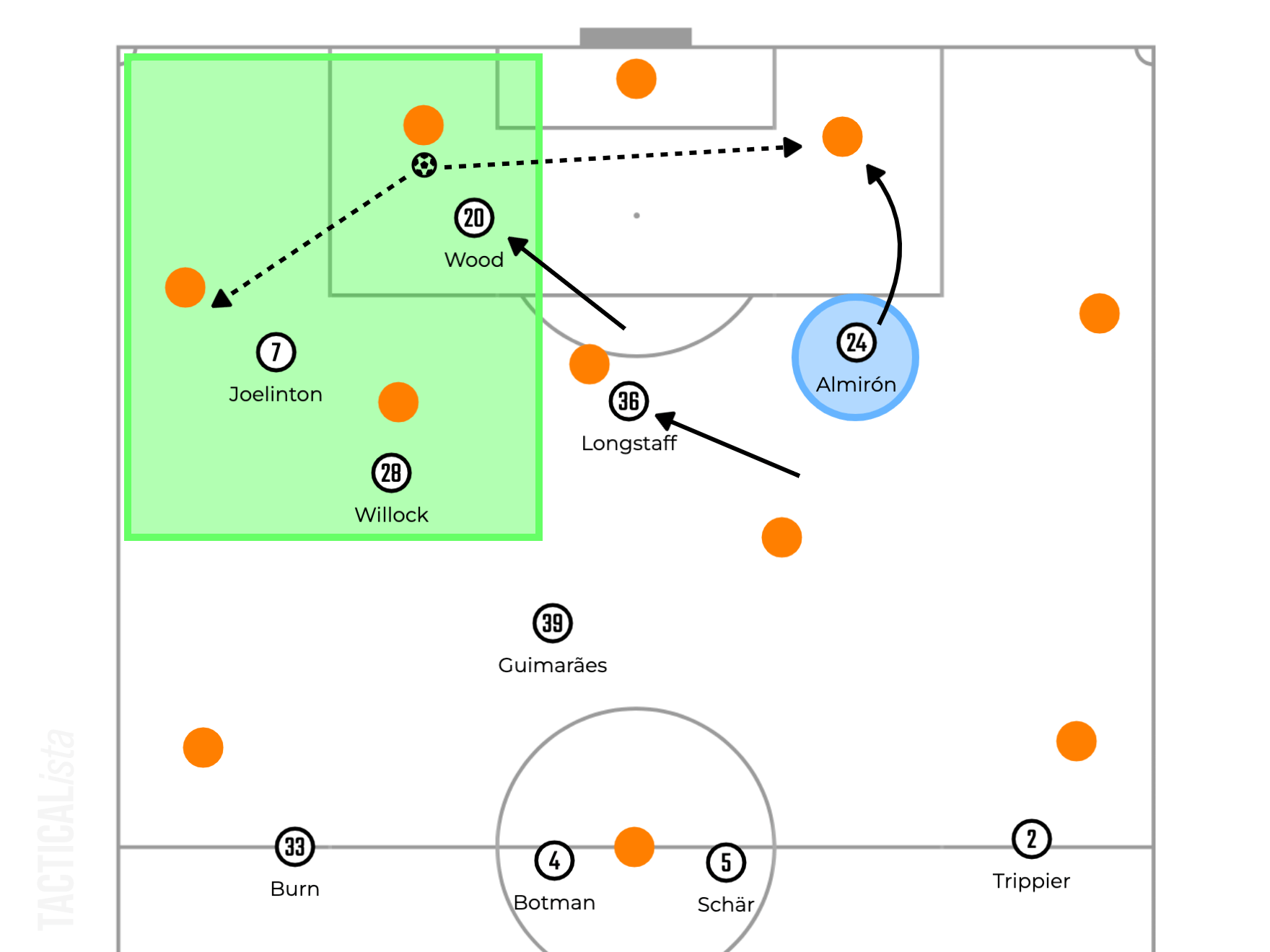 However, sometimes the opposition team can beat the winger’s pressing. 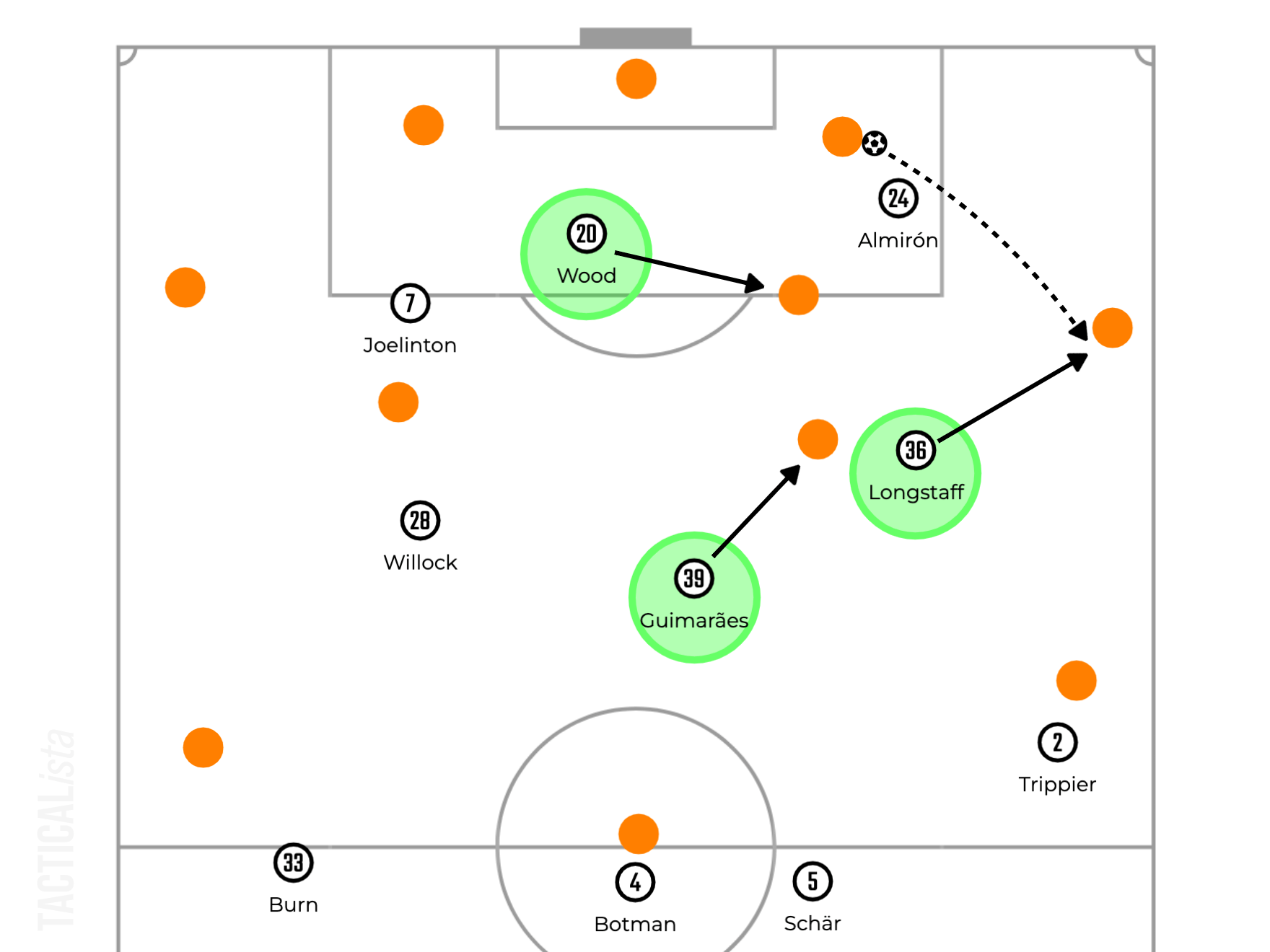 In the midfield, the shape will change into a 4-5-1 compact defensive block. In this case, the players who jump to apply pressure to the opposition centre back or defensive midfielder are the attacking midfielders while wingers stay narrow to close the gaps. 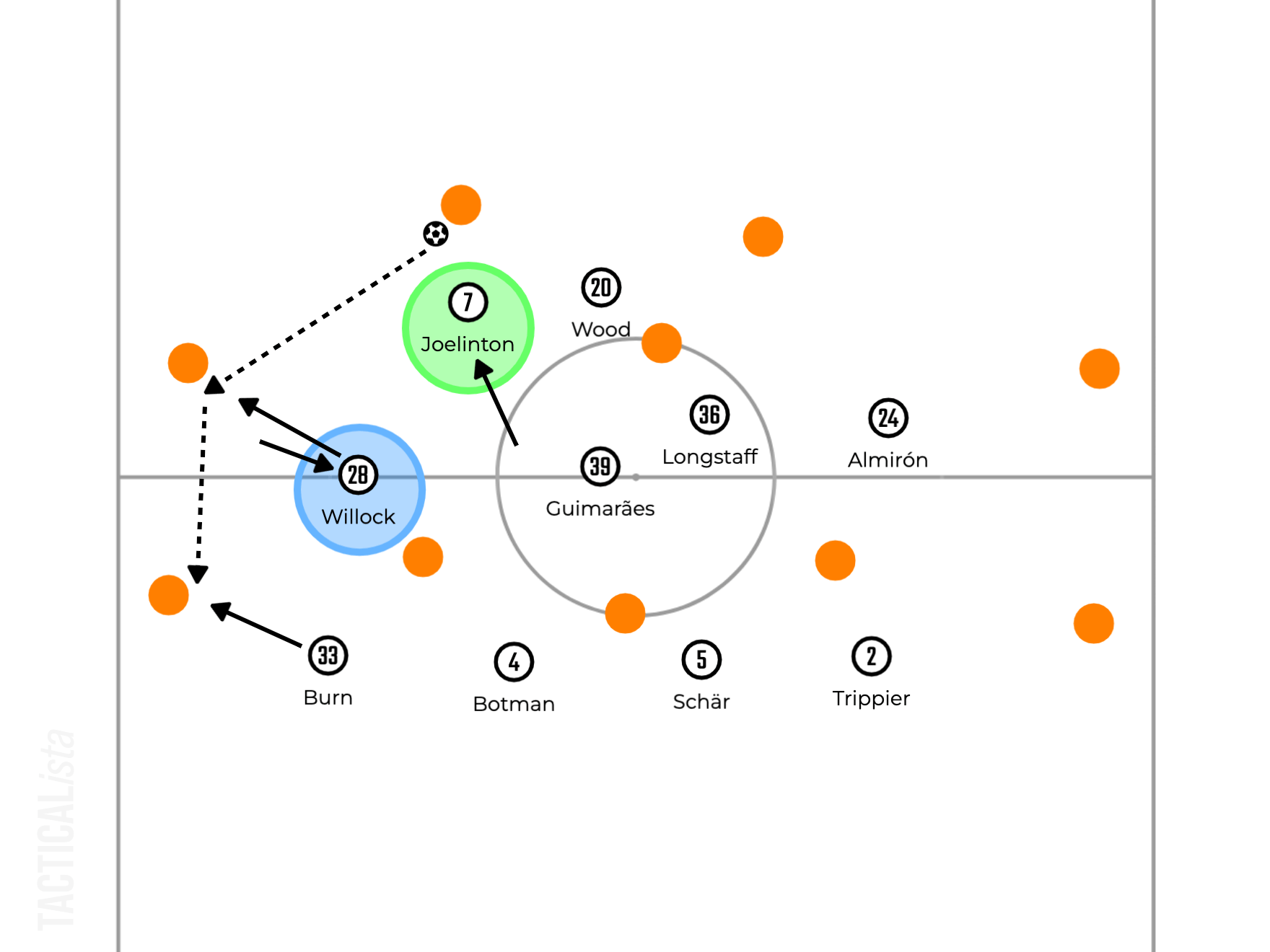 The attacking midfielder presses to the ball and the winger closes the gap to play through. Then, they force the opponents to play wide and this is the trigger for them to press to the opposition players.

Additionally, in the case when the opposition defensive midfielder possesses the ball in the middle, the three midfielders will work together to lock him in. 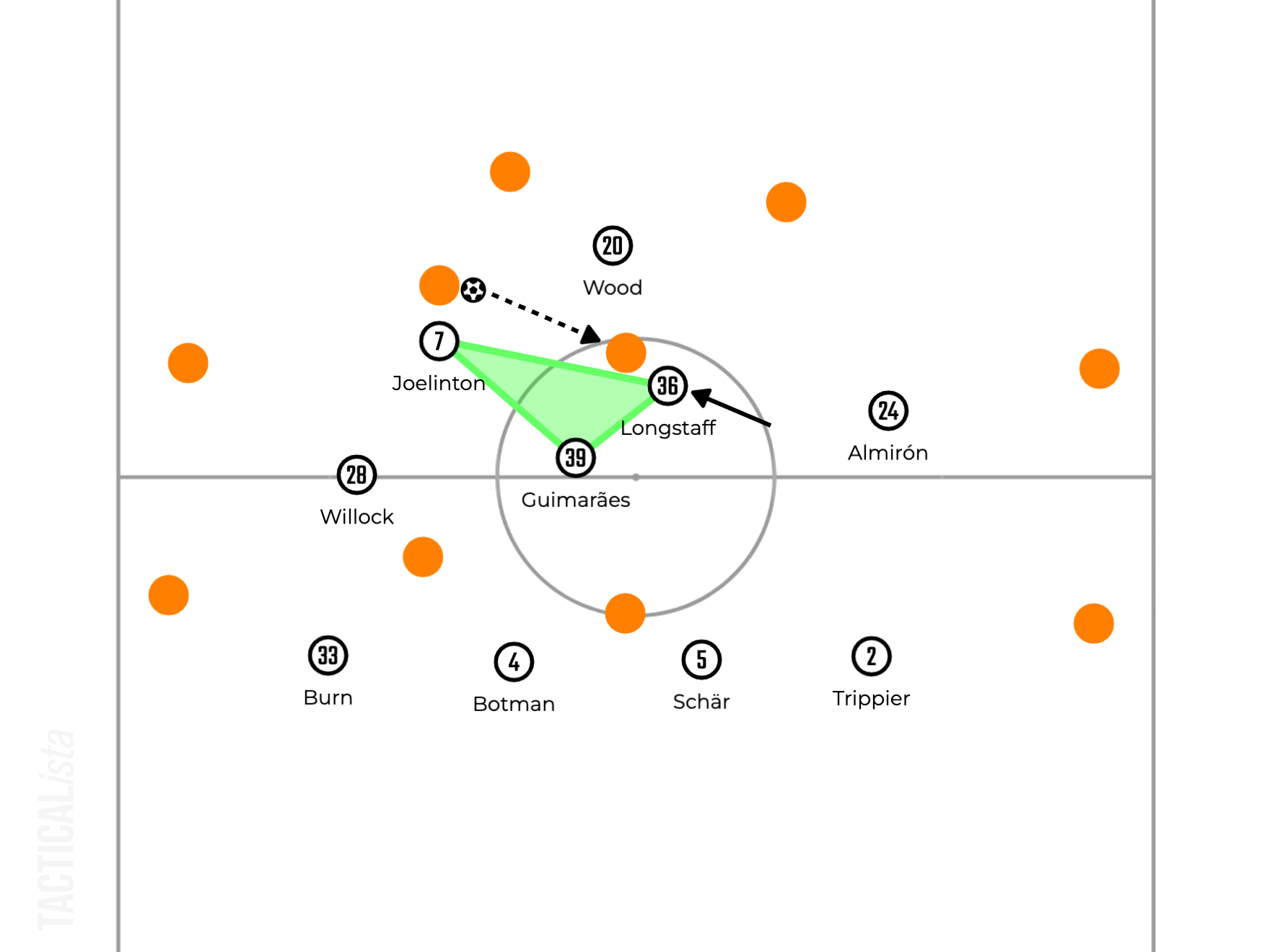 However, as the defenders focus on marking the opposition attackers more than working as a line, sometimes the back line is easily broken by a long ball. Therefore, it is possible to say that in order to beat the pressing of Newcastle in the midfield, it is vital to play over the solid midfield five.

In the final third, they defend with a 4-5-1 as they do in the midfield. However, they are more focusing on forcing the opposition team to play wide. After letting them play outside, they will make a solid defensive block. 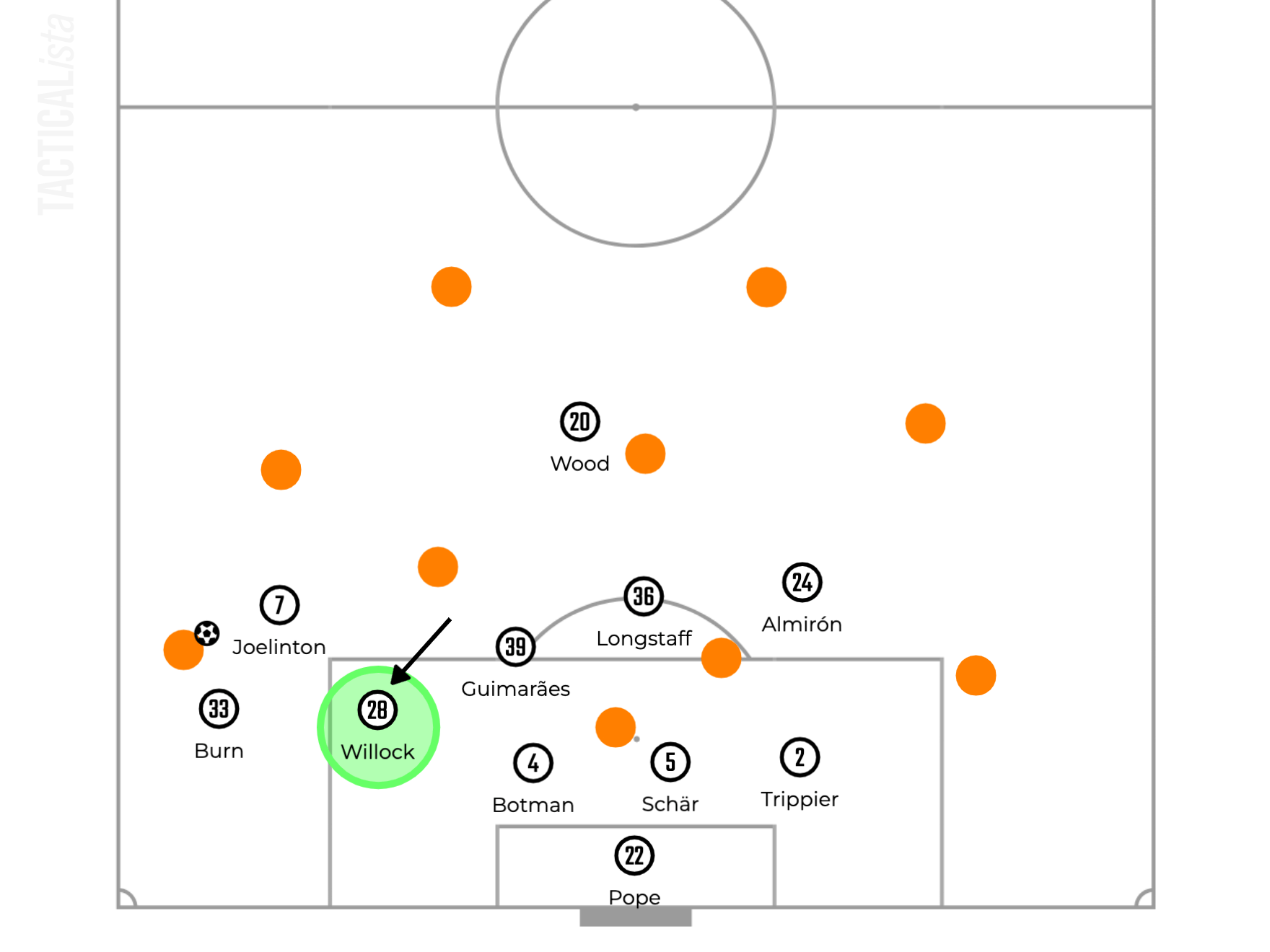 After the opposition winger receives the ball, the fullback and winger make a 2v1 against him and the attacking midfielder will defend the space between the fullback and centre back. This is important to prevent them for penetrating the box, where Newcastle want to use when attacking in the final third. In addition to this, the defensive midfielder Guimarães is also ready for covering. Consequently, it is extremely difficult to break down Newcastle’s defensive block.

In terms of defending against crosses, the nearest centre back will cover the space around the first post and the opposite side centre back or fullback are focusing on marking their marker than covering the allocated space.

Overall, this solid defence makes it possible for Newcastle to play simple but the most effective direct long balls again and again. Therefore, it is possible to say that they strengthen their attacks by their defence, which makes them one of the completed teams in the Premier League. Let’s see how far they can go. Thanks for reading.