The game of Lazio against Inter was the game of zonal pressing against man marking pressing. Of course, Maurizio Sarri who is the manager of Lazio is known as one of the specialists of defending with zonal marking. On the other hand, especially when pressing in the opposition half, Inter tend to focus on the opposition players whom each player face rather than defending the space. Both have advantages and disadvantages and the difference of the marking types influenced on the possession of each other in this game. Thus, the analysis of the game itself and the discussion of the difference of the types of marking are going to be provided in this article.

Let’s begin by analysing both pressing styles because they had a huge influence on the first phase of the game. In short, Inter could have more possession as Lazio’s zonal pressing aimed to prevent them from playing through rather than winning the ball. 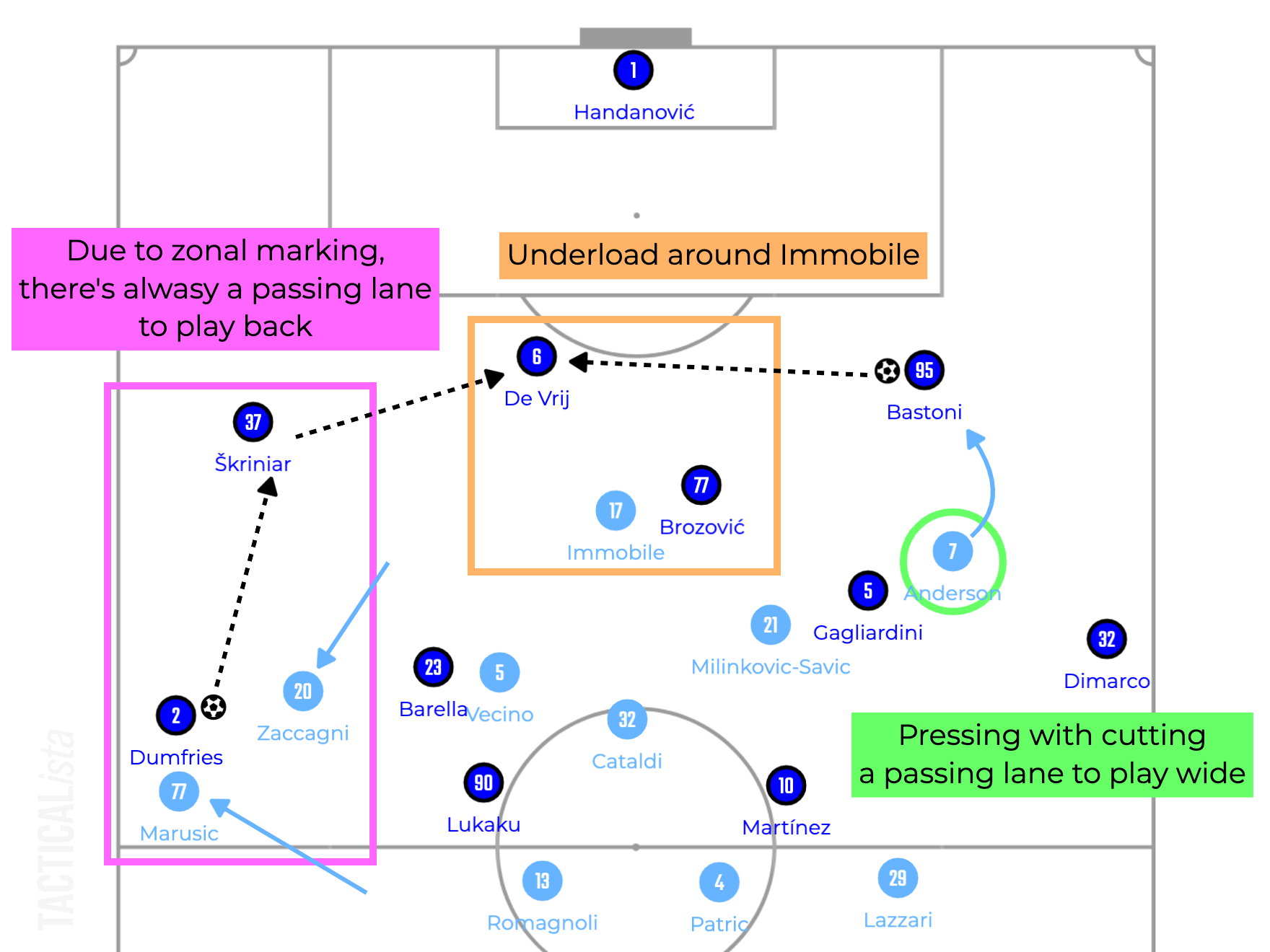 Sarri’s side had set a narrow 4-5-1 block and all players worked as a line to avoid being created gaps within the organisation. The first player to press to the opposition defensive line was the winger who pressed to the opposition side centre back with cutting the passing lane to play wide. It often could prevent him from playing to the opposition wingback, but he still had a passing lane to play back and recycle the ball. Similar scenario occurred after the side centre back could play to the wingback. In many cases, the fullback stepped up to close down the wingback and the winger dropped to cut the passing lane to play inside at the same time. It also gave the wingback to play back to the defender of Inter so Lazio couldn’t win the ball high up the pitch. Additionally, one of De Vrij and Brozović was always a spare player as only Immobile was there so Inter could recycle the possession again and again. In conclusion, Lazio could prevent Inter playing through but hardly regain the ball in the opposition half. However, it doesn’t mean Inter struggled with building the attack. The compactness of Lazio’s block was not only vertically but also horizontally. Therefore, both wingbacks always had space and time so either De Vrij or Brozović played long to the opposite side wingback and progressed the ball into Lazio’s half because both had also enough space and time to execute diagonal long passes as it was mentioned before. The detail of the attack in the final third will be discussed in the next chapter.

While Sarri allowed Inter to have the possession, Simone Inzaghi tried to force Lazio to throw the ball away as soon as possible to regain the ball in higher area of the pitch. One of the advantages of man marking pressing is applying the pressure on the ball quickly and constantly, which reduces time of the player on the ball to make a decision and forces him to play roughly.

The trigger to apply pressure on the ball was when the opposition centre back played to the fullback as both strikers tried to close the gap and prevent the centre back playing to the pivot. As soon as the opposition fullback receive the ball, either the wingback or attacking midfielder presses to the fullback. At the same time, other players around the ball tried to find the opposition players to mark and prevent them to receive the ball on feet. This man marking pressing nullified all options to play short and the player on the ball would be forced to play long and Inter wanted to collect it. However, Sarri’s side is good at keeping playing on the ground. Stepping up and marking the opposition players high up the pitch means the gap between each player will be bigger and the vertical compactness of the defensive block will disappear. In consequent, there was a 1v1 situation against the Inter’s centre back in a big space in the middle of the pitch so if Immobile could win the duel, it was possible for Lazio to play counterattacks. Actually, Inter could press high in first 15 minutes in the beginning of each half and Lazio struggled with progressing the ball at the moment while they sometimes could play counterattacks by playing through. After first 15 minutes, Inter’s wingback came to stay deep and Lazio could have more possession.

Difference in Attacking in Wide Areas

So far, both team’s pressing and build up play were analysed. Thus, in this chapter, the difference of the final third attacking is going to be discussed. In terms of how much they could threaten the opposition goal, Lazio was much better than Inter. Especially, the quality of the attack in wide areas made a difference. Firstly, Inter’s attacking is going to be analysed. 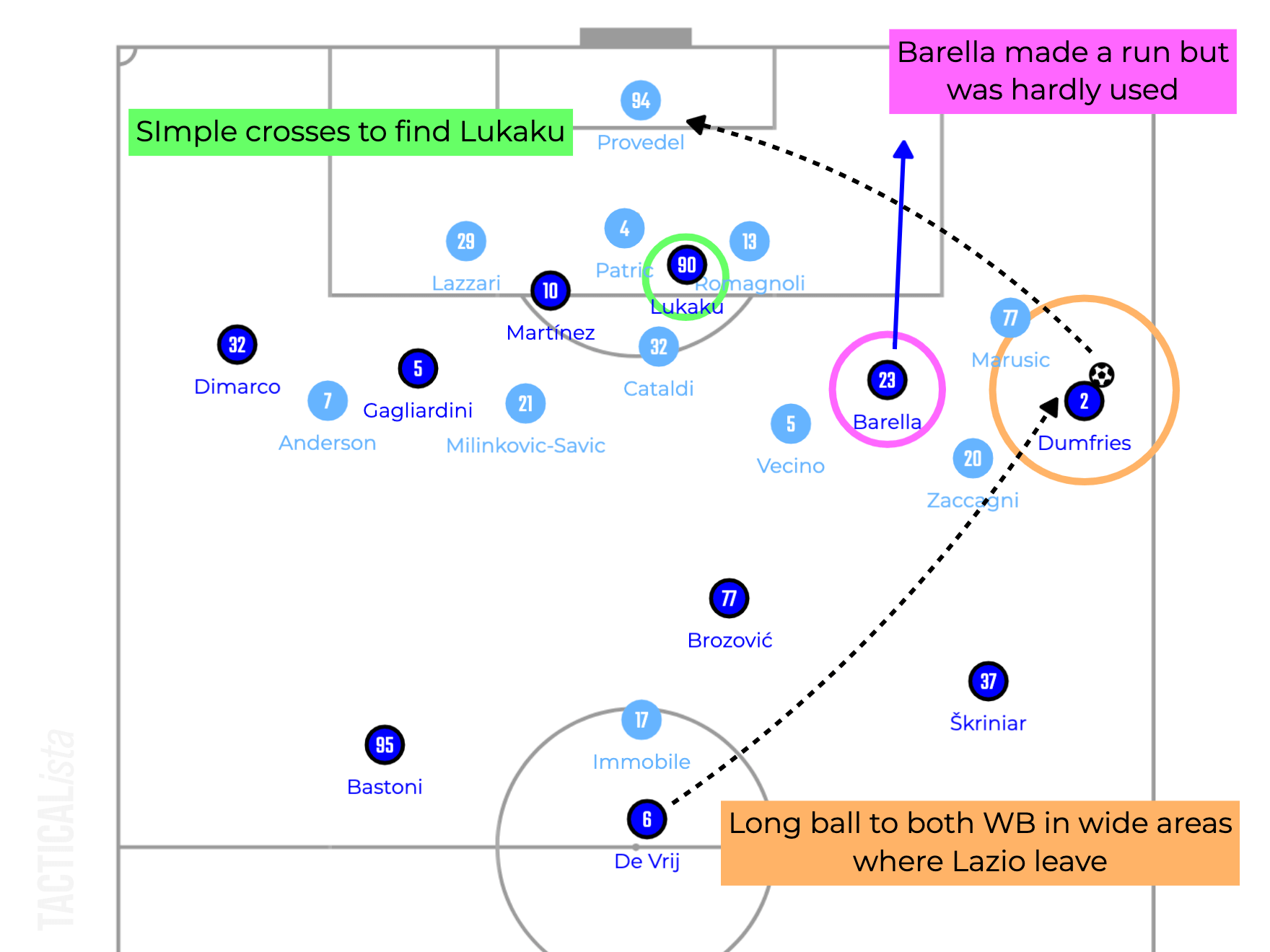 It was too simple to threaten the Lazio’s goal as they could only score from the set piece. As it was discussed in the previous chapter, Inter often progressed the ball by playing long to the opposite side wingback. Therefore, how to penetrate into the opposition box was important to increase the possibility to score goals. However, they hardly tried to play into the opposition 18-yard box while Barella sometimes made a run in behind. Instead of playing short into the inside of the opposition defensive block, both wingbacks often delivered simple crosses to aim Lukalu. Considering Lukaku’s ability, delivering crossed from the outside of the box is good enough to find a goal but they could have done more.

On the other hand, Lazio was excellent at exploiting the wide areas. The second goal tells everything. 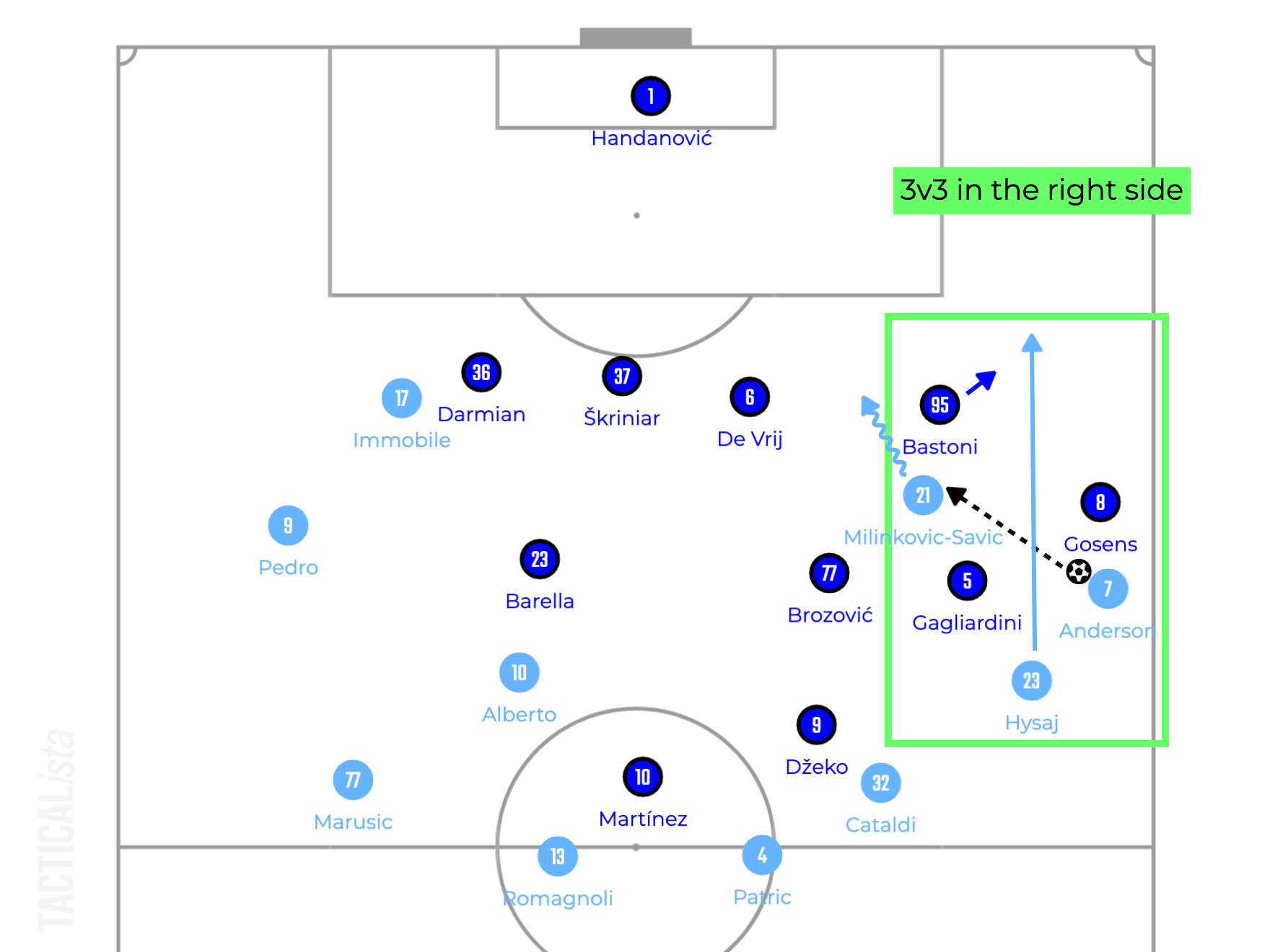 It came from the attack in the right area. In this game, there were a lot of 3v3 or 2v2 in wide areas in the Inter’s half, but Lazio easily broken down the flank. After exploiting the right side, Milinković-Savić switch the ball to the other side. 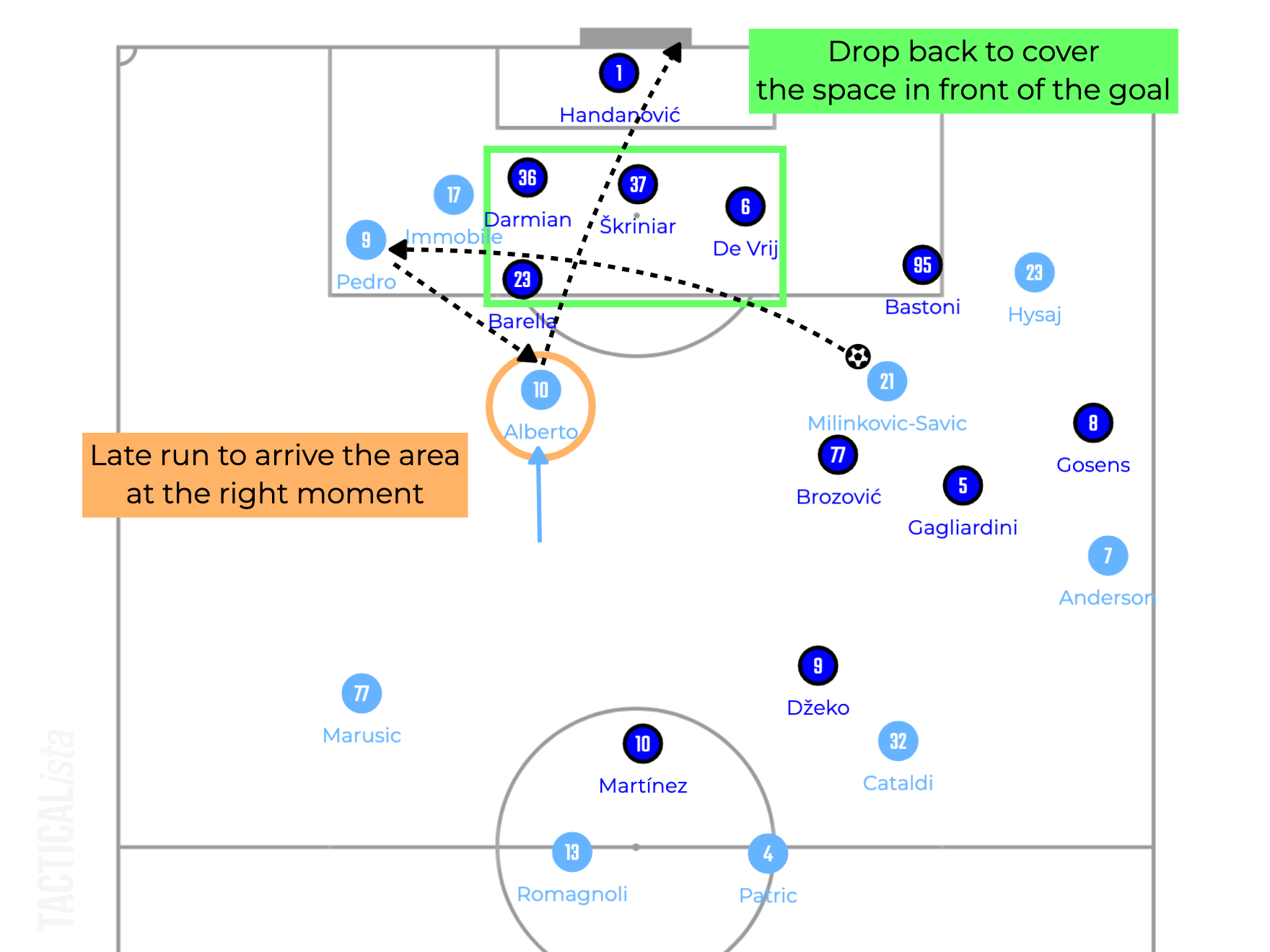 In the left side, Pedro kept the width, dragged Barella out and laid the ball back to Alberto who struck the ball into the net from where Inter’s defenders made by dropping back to cover the space in front of the goal. This flow of the attack in the final third was great and Lazio made a lot of chances from exploiting the wide areas.

Overall, Inter almost dominated the game when they could press high but the quality in the final third both attacking and defending were poor. On the other hand, Lazio struggled with pressing high as Inter played long diagonally but they could defend what they must have defended. Thanks for reading. 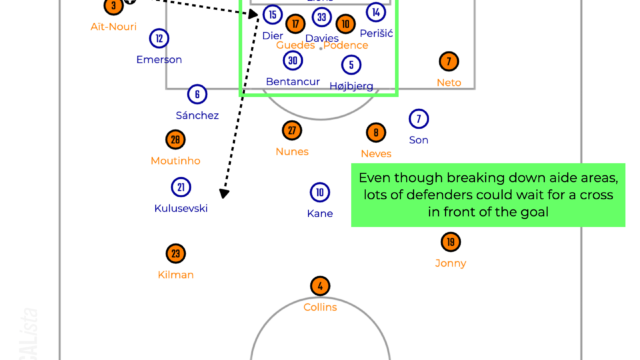