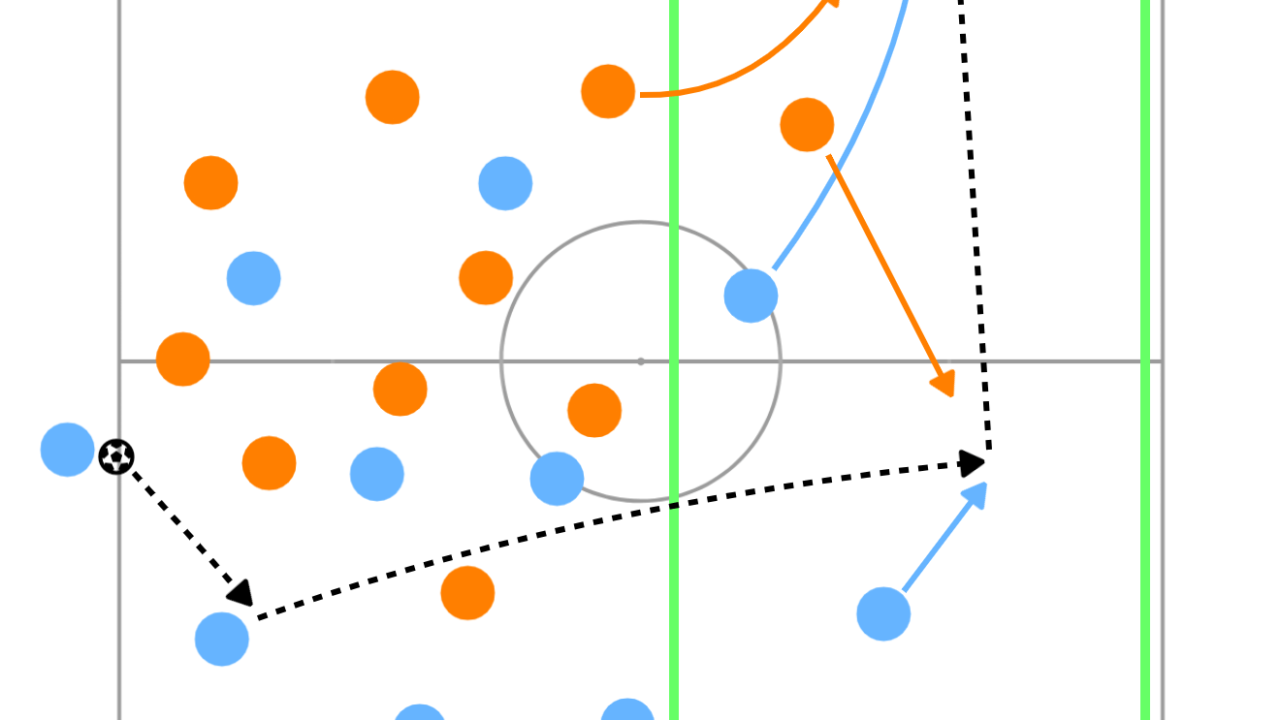 Interestingly, there is a correlation between the success rate of throw-in and the position in the league table. 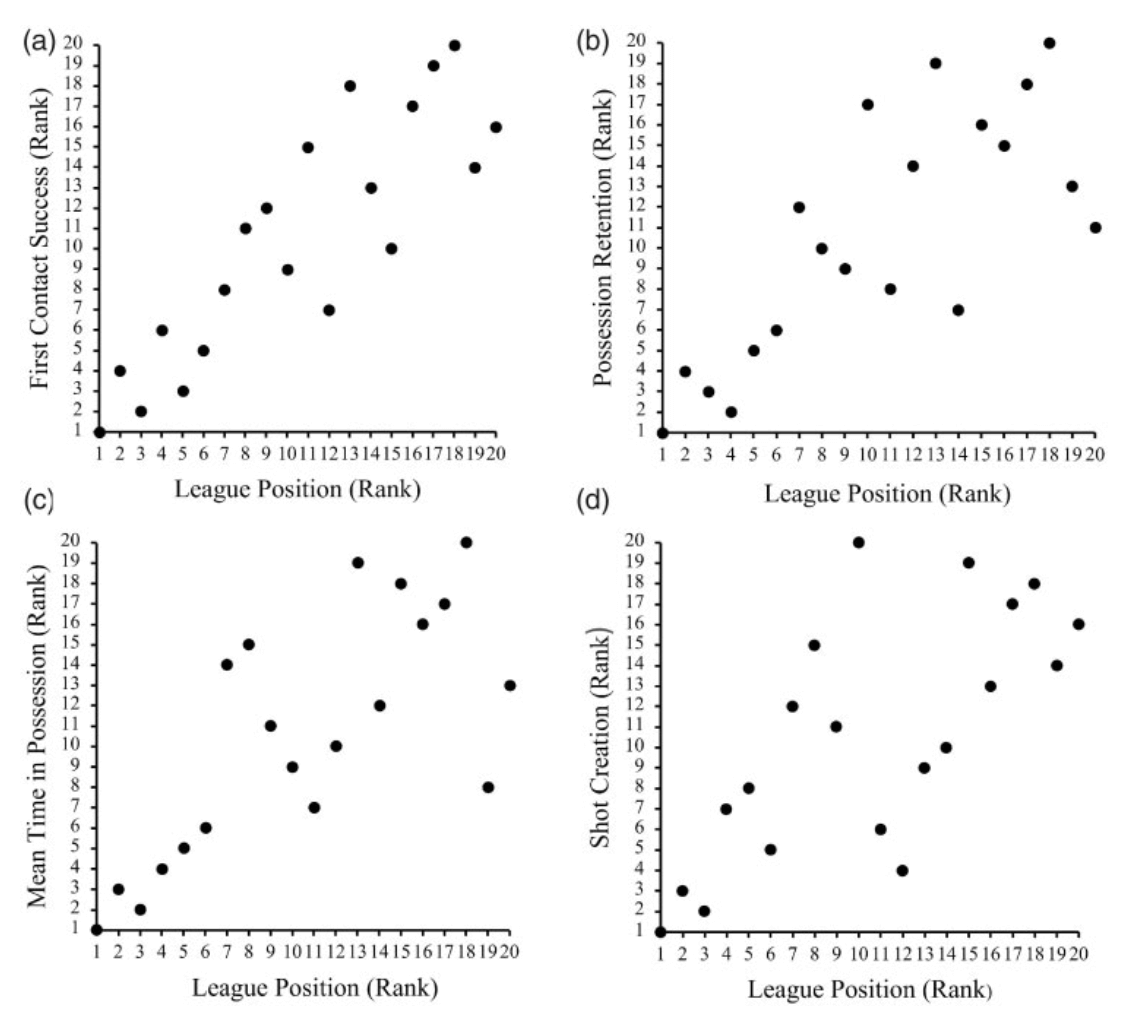 First of all, do you know how many times a team throw the ball in in a single game? According to Wiebe (2013), the average number of throw-in for a team in a single game in 2012-13 season of some European leagues is 22.49 in English Premier League, 21.42 in Serie A, 23.78 in Bundesliga and 26.04 in Ligue 1. These numbers indicate that throw-in happens more frequently than any other set pieces such as corner kicks, goal kicks or free kicks (Stone et al., 2021). Then, does this mean throw-in should be more paid attention than other set pieces? This will be a question which is aimed to be solved in this article.

In some pieces of research about performance analysis of throw-in, how the factors such as the distance, direction, area, opposition pressure or time after the ball goes out influence the results such as first contact success, possession retention, mean time possession or shot creation is usually considered (Augste and Prestel, 2021, McKinley, 2018 and Stone et al., 2021). However, the first thing which should be discussed is the purpose of throw-in because this determines what should be researched.

The main reason why the analysis of corner kicks or free kicks are more popular is these set pieces can produce many goal scoring opportunities. It is obvious that the number of goals is the most important in football. Therefore, set pieces such as corner kicks or free kicks which produce many goal scoring opportunities can get more attention. Then, how about throw-in? When analysing throw-in, only long throw-in in the final third which can produce goal scoring opportunities is often considered. In the previous chapter, it was mentioned that how to throw the ball further is famous to be researched. This is based on the idea of creating chances by throwing the ball further. 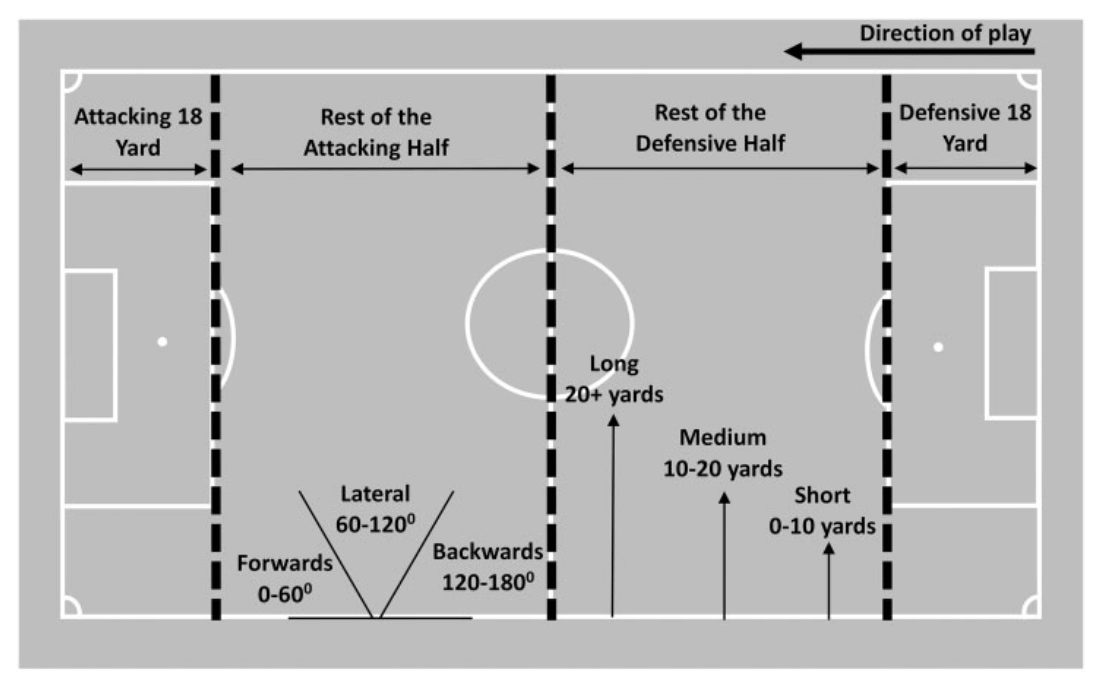 Then, what is the purpose of the rest of 85% throw-in? It would be securing the possession from throw-in for the attacking team and regaining the ball would be the objective for the defending team. And in order to secure the possession, it is important to win the first contact. Therefore, some factors which determine the success of the first contact and of course, the possession retention are going to be summerised.

It is interesting that the ball is the most frequently thrown towards the most ineffective direction. I strongly believe that this indicates that the strategy of throw-in can improve more and more.

Thirdly, the influence of the area of throw-in is going to be discussed. Based on the method which divides the pitch into four areas, the throw-in in the defensive 18 yard was the worst probability of both the success of throw-in and the possession retention Stone et al. (2021). As McKinley (2018) suggested that the ball tends to be thrown forwards in the own half, it is difficult to throw the ball backwards due to the limit of the length of the pitch. Therefore, a player is forced to throw the ball forwards in the deeper area of the own half even though the probability of the success of the throw-in is low.

4 Time after the Ball Goes out

So far, some pieces of research were summerised to understand throw-in more based on the data. As a result, it was found that the number of throw-in in the attacking third which can create goal scoring opportunities is from just three to four in a single game, so it is more important to think about the other 20 throw-in in a game. Additionally, it was also concluded that the key for successful throw-in is throwing the ball backwards in five seconds after the ball goes out of the touchline and from the defensive perspective, it is important to press high when the attacking team throws the ball from deep area of their own half as the success rate is extremely low.

In the next chapter, throw-in is going to be discussed from the view of tactics.

It is important to use the result of academic research to improve tactics on the pitch. Therefore, in this chapter, throw-in is going to be analysed from the practical perspective.

As those research suggest, throwing the ball before the opposition team setting up the defensive structure can guarantee the possession. With using the data, it can be described as ‘5 seconds rule in throw-in’. However, as it was mentioned before, the five seconds are just a rough slandered. From the attacking perspective, offering a safe passing lane and throwing the ball before the opposition organises themselves into the defensive shape are key factors to secure the possession. On the other hands, from the view of the defending team, it is important to shuffle across to the ball side and set up the defensive block to win the possession back.

In addition to the element of time, throwing the ball backwards can guarantee the possession with a high rate of success. Therefore, it wastes a valuable opportunity to regain the possession if the defending team thinks that it is okay to let the opposition throw the ball back. Instead of this extremely defensive idea, it is better to set up the pressing shape which cuts the option to throw the ball back and forces the opposition to throw the ball forwards, which success rate is low. However, the decision if going to press or sitting deeply depends on the game situation because pressing high contains a risk to be exploited the space in behind or the opposite side.

What Is Throw-in? [Liverpool Throw-in Tactics]This article provides the insight of throw-in using the example of Liverpool. This can beneficial for all coaches because this explores the most overlooked set piece in football....

Finally, one of the overlooked factors about throw-in is the transition between the open play and throw-in. the ‘five seconds rule’ which was mentioned earlier is one of them to express the importance of the transition from the open play into throw-in. However, if throw-in was not played quickly and the defending team could organise their shape, throw-in is going to be a truly set piece. In this case, players of both teams are positioned themselves in the ball side with an extremely narrow width. These shapes are completely different from the shapes used in the open play. Therefore, there will be a transition between throw-in and the open play after the ball is thrown, and this is a crucial moment. To change into the usual shape quicker than the opposition is the key. From the attacking perspective, especially, playing to the open space in the opposite side and breaking lines can create a goal scoring opportunity. On the other hands, if the defending team can shuffle over quicker than the attacking team, it is possible to surround the player on the ball as he or she is likely to be isolated and win the ball back. Therefore, the transition from throw-in to the open play should be paid attention more. 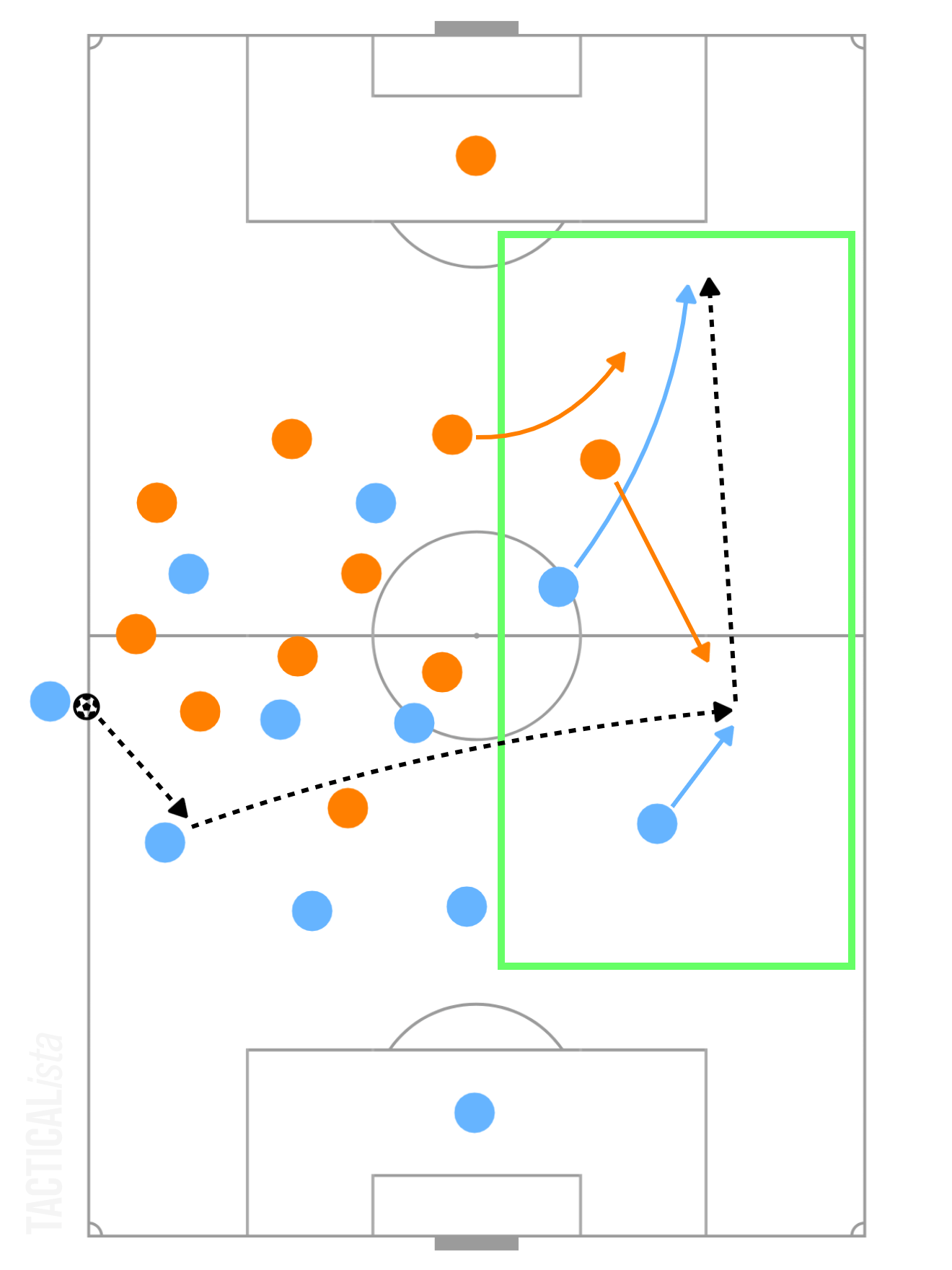 Firstly, there is a data about the result of the first contact, but it is not sure where the player touches the ball. It is obvious that receiving the ball on feet is much easier to control the ball than heading and flicking it. Therefore, the part of the body to touch the ball from throw-in can determine the play after receiving it. Thus, secondly, the decision making by the player receiving the ball is also insightful. Trying to keep the possession or playing long to avoid risks are completely different ideas. Additionally, the number of plays to keep the possession after receiving the ball can be an important indicator to show whether throw-in of the team is good or not.

Additionally, it must be supported by academic data that there is likely to be a transition after throw-in. This is just a hypothesis and must be investigated further.

Wiebe, A. (2013) Opta Spotlight: Long throw-ins are en vogue in MLS, and that doesn’t figure to slow down anytime soon. Available at: https://www.mlssoccer.com/news/opta-spotlight-long-throw-ins-are-en-vogue-mls-and-doesnt-figure-slow-down-anyti (Accessed: 16 November 2022) 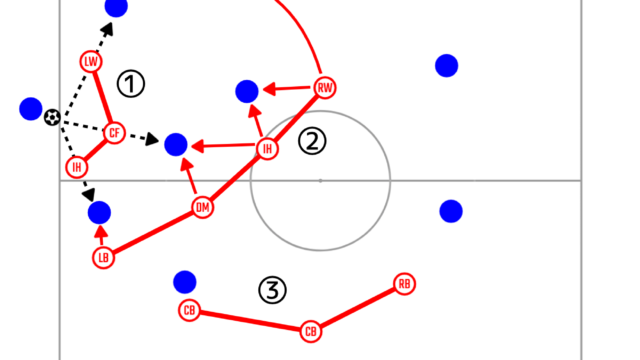 What Is Throw-in? [Liverpool Throw-in Tactics] 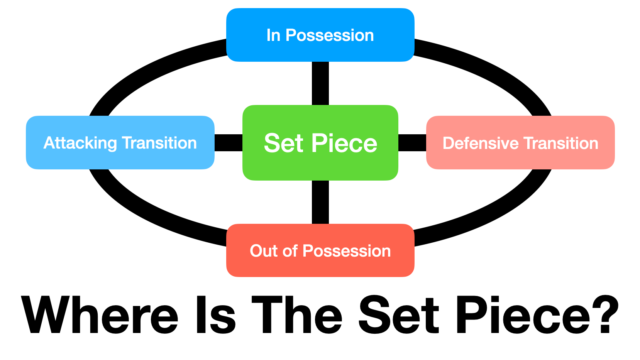 What Is The Transition between Set Pieces and Open Play? 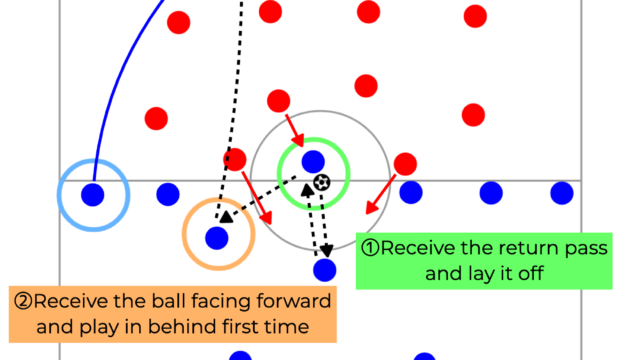 The Future of Kick off Surprise