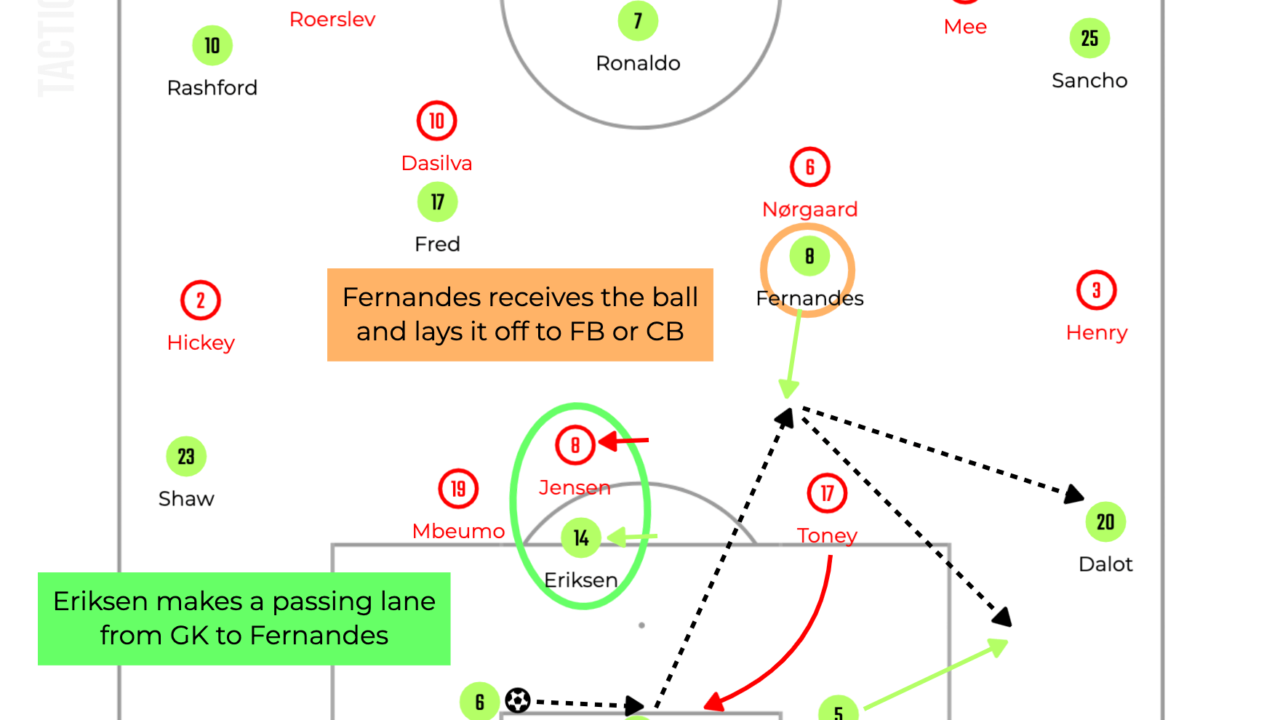 Manchester United lost 4-0 against Brentford and it was a defeat of tactics which Erik ten Hag was expected to improve at United. However, in this game, Ten Hag gave up his way and didn’t change anything throughout the game even though the Brentford manager Thomas Frank used a tactics board during the drink break in both halves. After the game, Ten Hag commented “you have to play more direct” after the game but also explained “we said play long, invite them and play long”. In this article, what actually Erik ten Hag wanted his team to do in the game is going to be discussed after the analysis of the game itself.

Firstly, United conceded second goal from losing the ball when building up from the back and it was highly featured, but they played from the back probably third or fourth times and most of the time, they had the ball in the Brentford half after securing the second ball or regaining the ball. However, the possession in the opposition half was also terrible as United conceded the fourth goal from the counterattack. Then, the problems in the opposition half are going to be analysed. 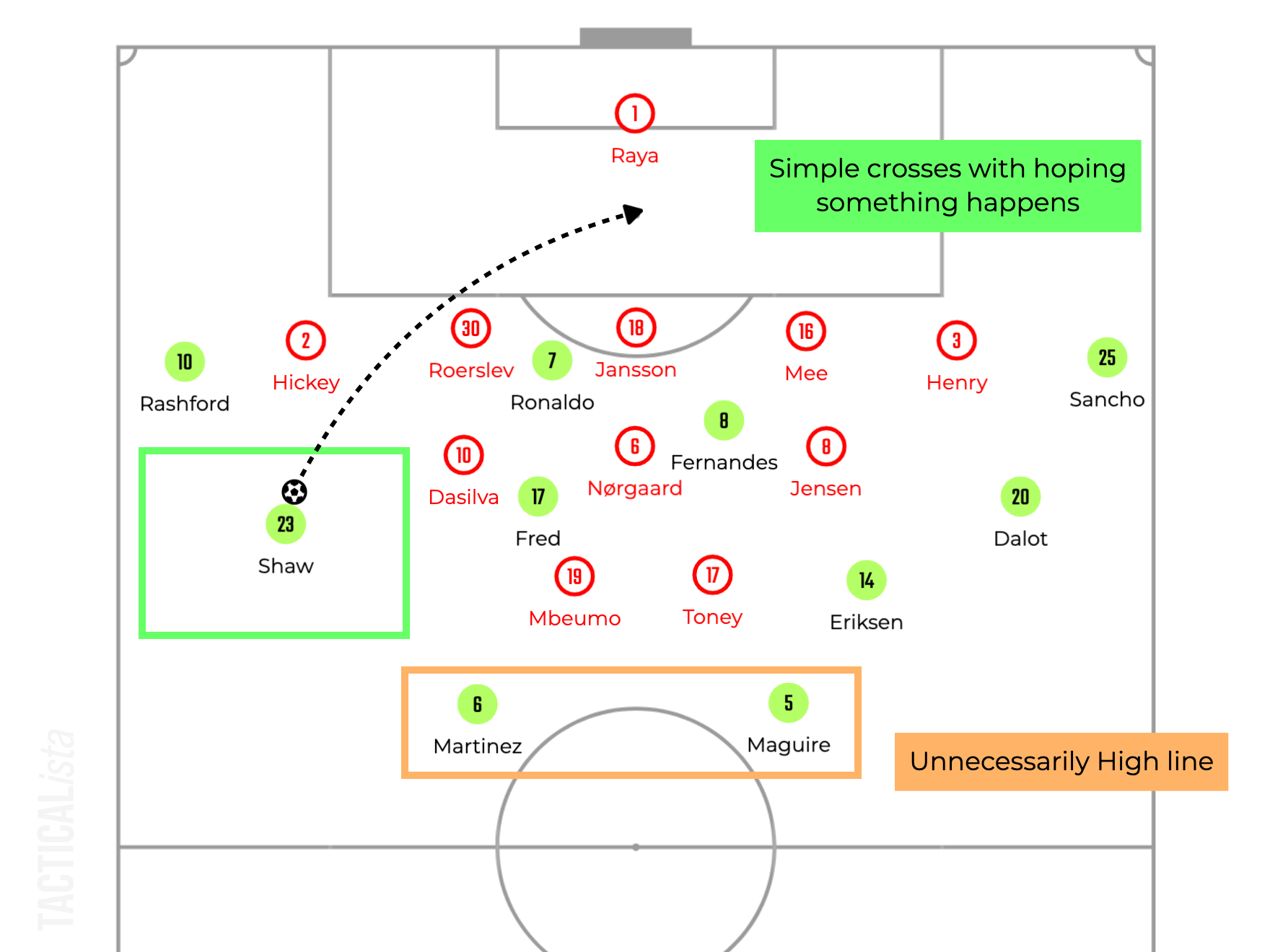 Brentford defended very deeply with a 5-3-2 in their half and even two strikers can drop to close the gap between midfielders. Therefore, it is always difficult to create big chances against them. Thus, main consideration is keeping the possession as long as possible to create chances as many as possible while managing their counterattacks. However, both centre backs of United positioned themselves unnecessarily high, which made it easy for Toney and Mbeumo to exploit the space in behind. Additionally, if they stayed deeper, it was possible to drag the opposition strikers out by playing back to them and stretch their compact block vertically, which makes the space between the lines bigger.

In terms of creating chances, they only deliver simple crosses from far from the goal and Ronaldo had two chances but he failed to score. That’s it. Sometimes Dalot underlapped Sancho and received the ball in the pocket and it could be an option to break down the opposition deep block but it wasn’t enough. In terms of quality of wingers, they couldn’t beat the opposition wingbacks at all, which was also the one of the reasons why United couldn’t penetrate into the box.

Then, let’s analyse the build up play of United and Brentford’s clever pressing. The illustration below shows the goal kick structure of that game. 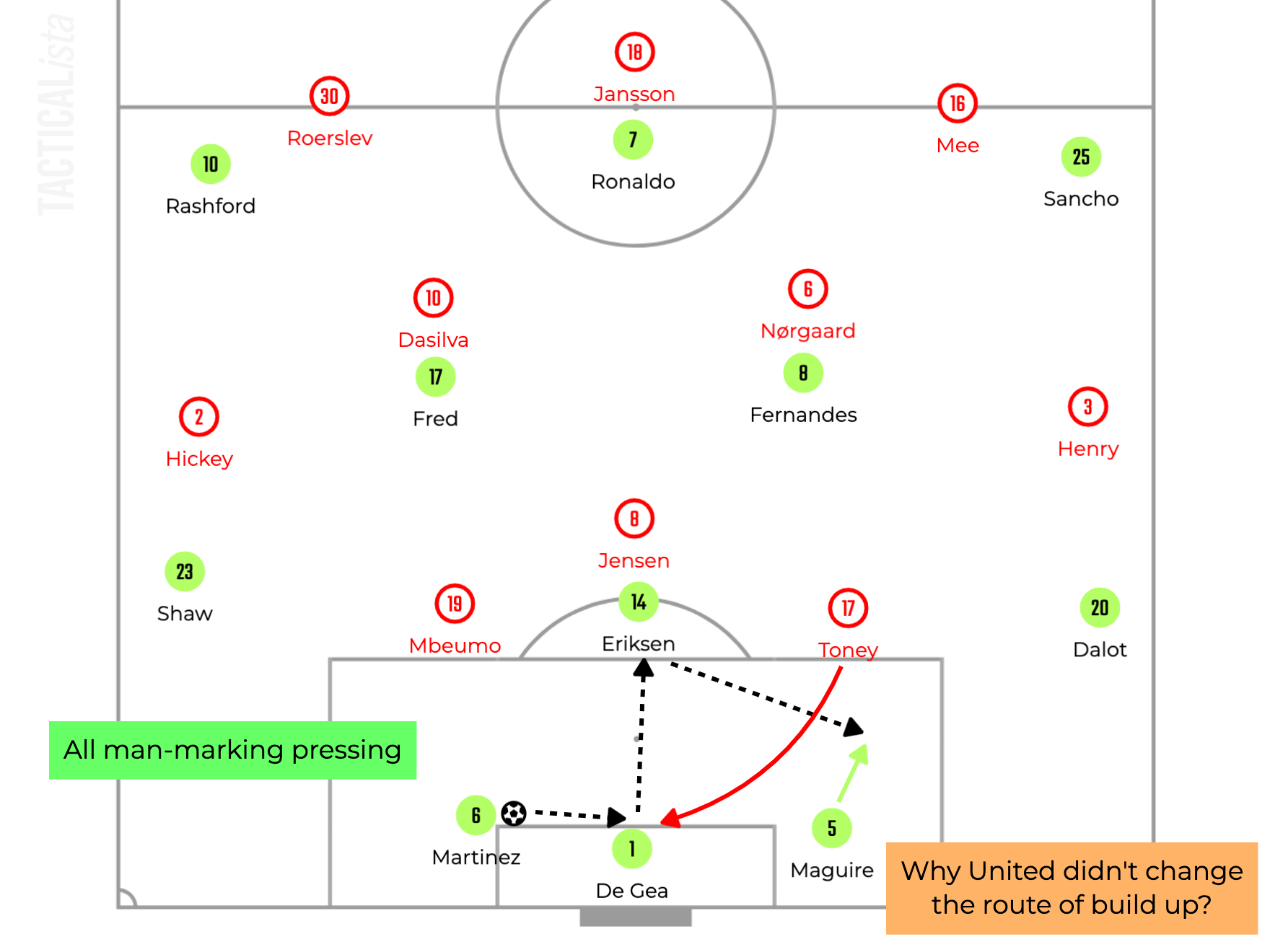 Brentford midfielders tried to mark each midfielder of United and pressed with all man-marking system. After De Gea receives the ball from Martinez, the left striker Toney pressed on him with cutting the passing lane from De Gea to Maguire. De Gea is right-footed player so if Toney applied pressure from right side of him, it is more difficult for De Gea to play right side. Therefore, De Gea tried to play to Eriksen and let him lay the ball off to Maguire who was free from the pressure by Toney. However, the second goal of Brentford came from losing the ball there by Jensen.

If something doesn’t work, the alternative option must be found. However, after the goal, De Gea gave up playing short and decided to play long after pushing the players up. One question to Ten Hag is “Didn’t you have another idea?”. Obviously, playing long and fighting for the second balls mustn’t be his way so it is natural to think Ten Hag didn’t have another idea, or De Gea completely lost his confident or the other players didn’t trust him anymore…

Then, in the next chapter, the possible alternative ideas are going to be discussed.

The Responsibility of Erik Ten Hag

The most important thing is hidden in ten Hag’s comment after the game. He talked that United should have played more direct and also invited the opposition players. What De Gea did in the goal kicks was playing long without inviting the opposition pressure. Therefore, that was not what Ten hag wanted. Thus, in this chapter, the alternative ideas to play from the back is going to be discussed.

The first one is playing into the attacking midfielder instead of Eriksen. 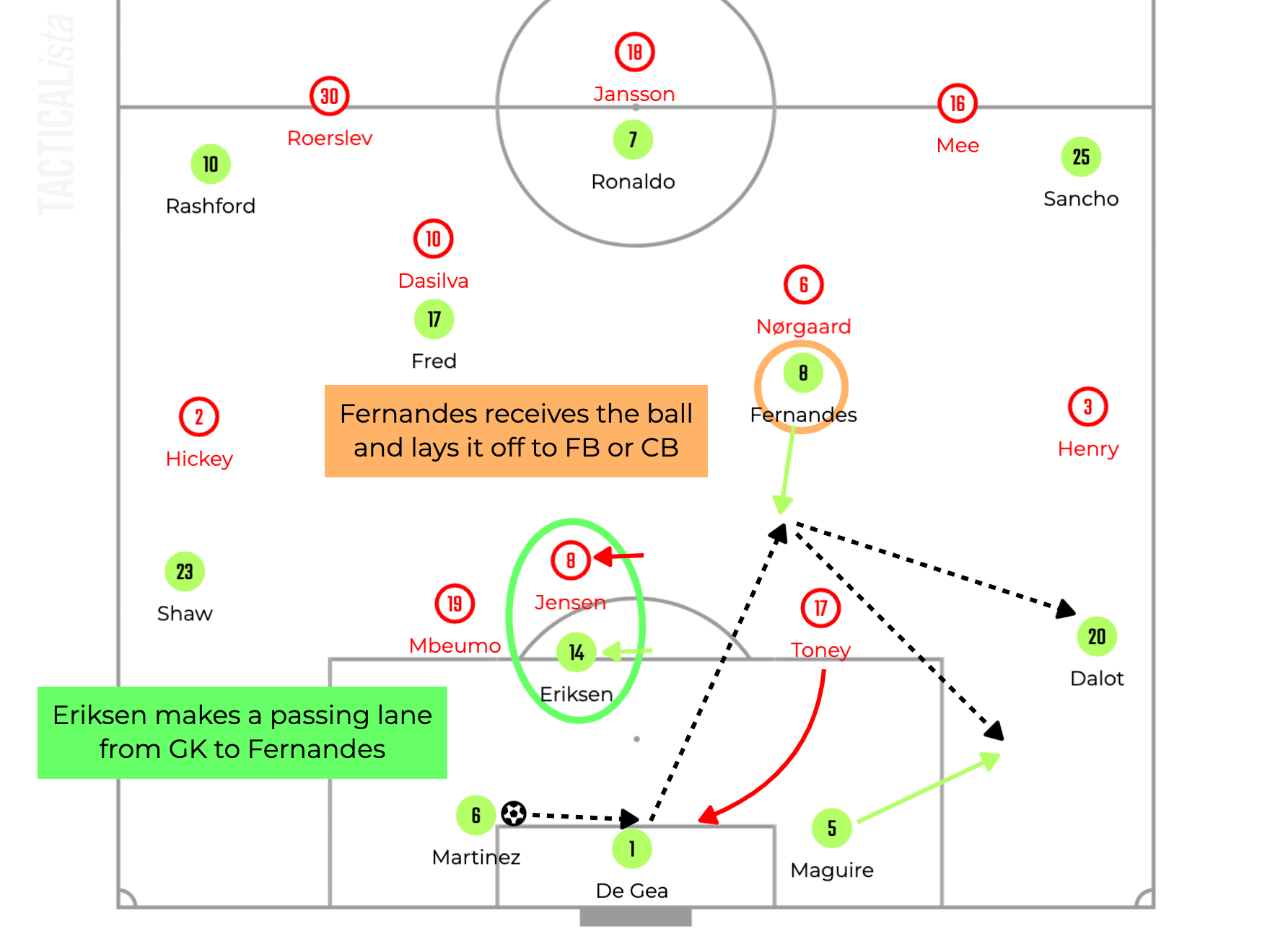 The second idea is more direct and using long balls to Ronaldo who never tried to be involved in building up. 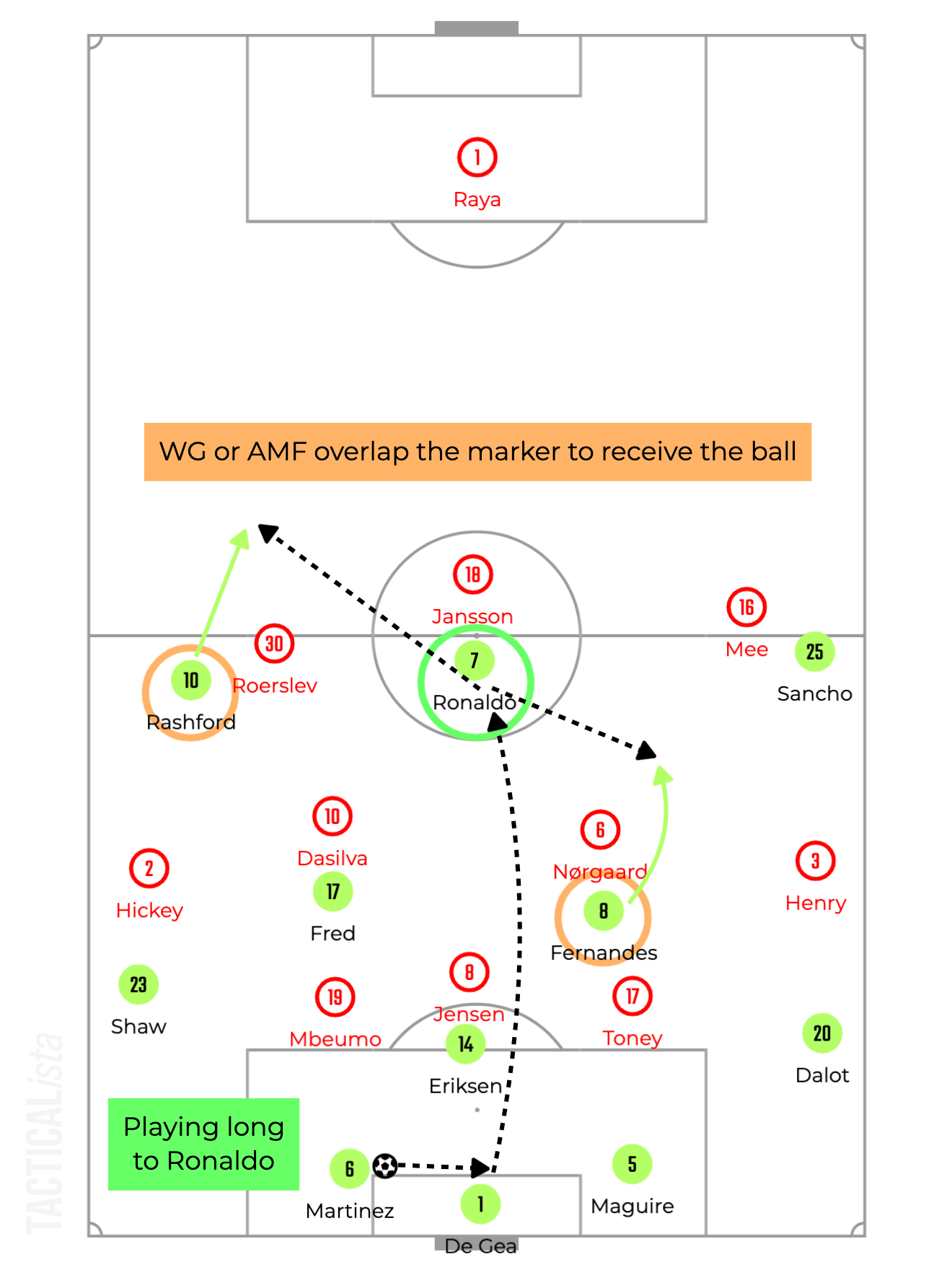 This time, De Gea plays long to Ronaldo without pushing up the team, which keeps Brentford high and stretched vertically. This allows United players to overlap their markers to secure the second ball.

Some ideas of alternative routes to play from the back were discussed but none of them were used in the game after conceding the second goal. Pep lost some games in this kind of way in his first season but he kept doing what he wanted to do. I really would like Erik ten Hag to keep doing what he wants to do because it is still August. Thanks for reading.